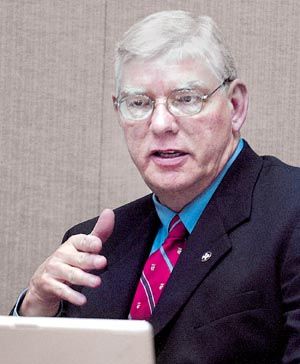 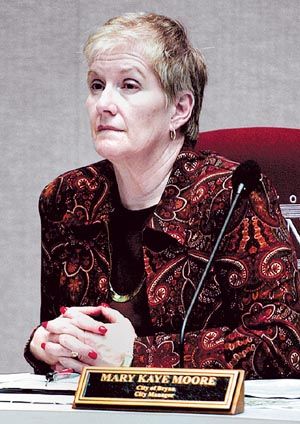 Bryan Mayor Ernie Wentrcek said any changes to the city’s sick leave policy must be cleared by the City Council.

Bryan City Manager Mary Kaye Moore said she believed she had the authority to change the city’s sick leave policy.

A divided Bryan City Council on Tuesday retained a sick leave incentive policy implemented by the city manager this month, but only after requiring that the council approve all future changes to employee benefits packages.

The policy will pay for up to 30 work days of unused sick leave to outgoing employees. But whether the incentive should have been implemented without prior council approval was hotly contested Tuesday.

Mayor Ernie Wentrcek cited a provision in the City Charter, telling City Manager Mary Kaye Moore that any plans to enhance employee benefits must be approved by the council.

The charter states the council “shall establish the salaries and wages” of council appointees and employees, which Wentrcek contended after the meeting includes the benefits packages and any bonuses and salaries of anyone who works for the city.

“My concern was how this new policy came into play October 1 and [the] council didn’t even know this policy existed,” he told Moore during the meeting. “And, you fully intended to implement it on October 1 without council authority.”

The council voted 4-3 to keep the policy in place, with members Joe Marin, Paul Madison, Boyd Sheffield and Mark Conlee approving the policy in support of the employees, they said. The policy must be renewed each fiscal year.

Several council members, including some of those who voted to keep the policy Moore implemented, told her they expected to be informed of any such changes before they occur in the future.

Moore read from notes Tuesday and pointed to the historical role of the city manager in implementing personnel policy, from allowing for buy-back of vacation time for retiring employees to an expansion of the sick leave policy that gave workers six months to care for themselves or an ill family member.

“I want to apologize for not knowing this would be something you would want to consider, because the council hasn’t considered these issues in the past,” she said.

Councilman Ben Hardeman voted against the policy, saying he wanted more time to study sick leave incentives among local employers and get public input. He said council members were subject to public criticism when former city manager Mike Conduff, who left his post in 2001, instituted the six-month illness leave policy without the council’s oversight.

“He’s no longer with us, and we’re trying to avoid that,” Hardeman told Moore.

The incentive was the result of two years of research on sick leave policies and benefits. It was brought to the city’s management team from a 12- to 15-member advisory committee, composed of employees and supervisors from all city departments. Moore said she implemented the policy, effective Oct. 1, after department heads voiced their approval.

“They don’t make quite as much money, but they’re committed to the city of Bryan and this would provide them very small recompense,” she said.

While Wentrcek said one of his chief concerns was that employees who would directly benefit from the policy change were recommending it, Madison embraced the employees’ wishes and said they knew best what would make them happy.

“If the employees of this city think that it’s a good thing for them, I’m going to have to go along with their wisdom about their own jobs,” Madison said. “It’s imperative that we show our employees that we do care about their concerns.”

At issue, Moore said, is rewarding a committed body of employees that don’t get paid as much as those “across the parking lot” at the city-owned Bryan Texas Utilities or “down the street” in the College Station city offices.

The incentive kicks in when an employee who has unused sick leave parts amicably with the city. Up to 240 hours, or six weeks, of remaining sick leave will be paid to that employee while the city is seeking a replacement for the position.

City administrators, including Moore and Chief Financial Officer Kathy Davidson, have said the incentive won’t negatively affect the city’s $41 million general fund, which pays for core city services such as administration, police and fire protection. But the policy isn’t without some cost — in fiscal 2003, the incentive would have cost the city $80,000, Davidson said.

Sheffield told fellow council members they ought to trust Moore in her assessment that it won’t impact the city budget.

“She’s running the show, and if she can do that within the budget, then we need to trust her,” he said. “If we can come up with a way to keep people from using sick leave, I think we can increase the production of our employees and the services to the city.”

In other business, the council:

• Gave the go-ahead for a $2 million project to extend North Traditions Drive in the Traditions Golf Club by nearly a mile. The project, which is expected to be complete by late 2005, will continue the planned loop through the housing and golf development and connect to Gabbard Road, creating an outlet to North Harvey Mitchell Parkway.

The cost also includes constructing sidewalks and building sewer, gas and water lines. The extended loop will open more than 50 acres to be sold as residential lots.

• Approved a fiscal year 2005 budget with $763,000 in projected revenues for the city-owned LaSalle Hotel. The council gave the approval Tuesday afternoon in its role as Bryan Commerce and Development, a separate entity that oversees the city’s business interests.

Hotel officials said they plan to receive no funding to help cover operating expenses in 2005, though the city has budgeted $200,000 this year for that purpose. The city transferred $86,329 to the hotel to fund operations and improvements last year.

The LaSalle’s occupancy rates — calculated as the percentage of rooms filled on average over the year — are expected to climb from 41 percent in 2004 to 47 percent in 2005, said David Storrie, housing and economic development program administrator. Much of the increase is expected from fire school business, with 1,500 additional rooms booked for students scheduled to attend fire training at Texas A&M University in the upcoming year, Storrie said.