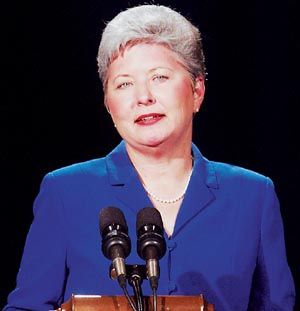 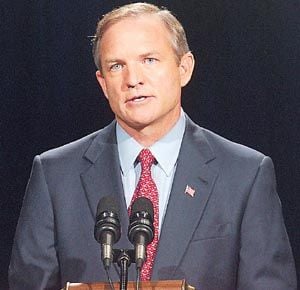 Democratic U.S. Congressman Chet Edwards denied accusations he helped scam soldiers and repeatedly asked his opponent to back her claim.

U.S. Rep Chet Edwards and state Rep. Arlene Wohlgemuth faced off in a Saturday night debate, clashing on issues ranging from abortion and health care to their records of supporting the military.

During the sometimes heated give-and-take between the two candidates — each vying to represent the 17th Congressional District — Wohlgemuth pointed to her recent claims that Edwards supported a Waco insurance company she accused of scamming young soldiers.

“There was one congressman they turned to — it was Chet Edwards,” Wohlgemuth said, explaining that Edwards organized a meeting between the insurance company president and two senior U.S. Army officials.

Following the meeting, the Army reversed its decision to prevent the company’s agents from selling insurance on bases worldwide.

Edwards said he did hold the meeting, but he denied Wohlgemuth’s claims that he helped insurance agents banned from certain military bases be reinstated and allowed to return. Edwards told Wohlgemuth she wasn’t being truthful with voters and repeatedly asked her to provide the name of a specific base where such an incident had occurred.

“Once again, you really ought to do your homework,” Edwards said, after Wohlgemuth responded that he helped the company return to all bases.

The hour-long debate was held at KAMU-TV studios on the Texas A&M University campus and televised live on KBTX-TV 3, KAMU-TV 15 and KWTX-TV 10 in Waco.

Wohlgemuth is a Republican who has served the past decade in the Texas House. Edwards, a Democrat, is a 13-year congressman who currently represents the 11th Congressional District.

The debate was moderated by KWTX anchor Gordon Collier. In addition to questioning each other, the candidates also were questioned by Collier and three panelists: KBTX anchor Joe Brown, KBTX reporter Crystal Galny and KWTX reporter Ryan Kelly.

During the match, the candidates sparred on issues ranging from abortion, the high cost of prescription drugs and their ability to work on a bipartisan basis.

The rising costs of prescription drugs was one of the first issues of the night.

Wohlgemuth said she had worked to bring $150 million worth of rebates to Texas and would continue to seek innovative solutions to combat rising drug costs. Edwards said he wanted to crack down on drug companies, which often “gouge” taxpayers twice —  first when they receive taxpayer funding for research and then again when they sell high-priced prescription drugs, he said.

The two also were at odds when asked about abortion. Wohlgemuth said she believes life begins at conception and that all life should be protected. Edwards said that while he doesn’t want to encourage abortions, he also doesn’t want to infringe on a woman’s right to choose.

The candidates further argued about the possible closure of the veterans hospital in Waco, which Edwards represents. Wohlgemuth complained the hospital had been on the chopping block since 1996 and that her opponent had done nothing to remove it from the lists of closures.

During Edwards’ tenure, she said, Primetime Live broadcast an expose on the deplorable conditions at the Temple veterans hospital.

“We must provide [veterans] with quality health care,” Wohlgemuth said. “I think that’s not been done.”

Edwards countered, saying he has met with the secretary of veterans affairs and was proud of his efforts working with veterans. He said that earlier this year he was presented with the Unsung Hero Award by the Brazos County American Legion.

“To my knowledge, Mrs. Wohlgemuth has done absolutely nothing. She’s been AWOL,” he said, noting that he planned to continue working for veterans on a bipartisan level.

Edwards said he would fight to bring jobs to the district and work to improve roads and highways in Texas — a move that would help the economic development of the district and ease traffic, he said.

The congressman said he also will continue to be a proponent for education, saying he wants to increase the number of Pell Grants, college work studies and student loans available. And, he said, he wants to repeal a recent law preventing Texas teachers from collecting their spouses’ Social Security benefits.

“I believe we need more members in Congress who will put the needs of our country above partisan politics,” he said.

Wohlgemuth said that if elected she will go to Washington and fight to make President Bush’s tax cuts permanent. She touted her part in helping the state balance its budget last year, despite facing a $10 billion shortfall. And, she said, she will continue to vote for limited government and traditional family values.

“We need a legislator who is well rounded,” she said, “who will vote the same way in Washington as they campaigned here at home.”