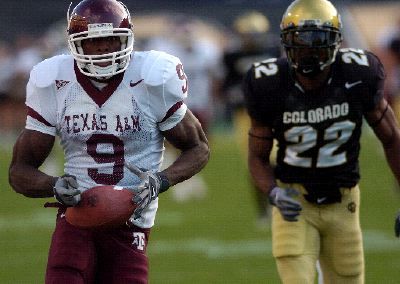 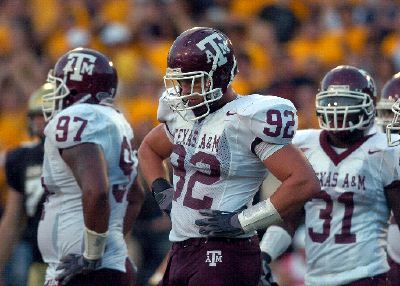 BOULDER, Colo. - If this was the game to define A&M's season, Webster's might need a few more synonyms for yuck.

The Colorado Buffaloes scored on their first three possessions en route to a 41-20 thumping of the Aggies in Big 12 Conference football action Saturday night.

Colorado (4-1, 2-0 in the Big 12) clearly established itself as the team to beat in the North Division at the expense of the defenseless Aggies.

The Buffs, not known for a quick-striking offense, passed the ball with little resistance, passing for 211 yards in the first quarter. The Buffs were as crisp as the thin Rocky Mountain air. CU had total control for the first three quarters, allowing both teams' reserves to play the fourth quarter.

The Aggies scored touchdowns on their last two possessions to make the final respectable, but more than half of the homecoming crowd of 50,686 was gone by then, celebrating.

They witnessed near perfect offensive execution by the Buffaloes, especially through the air. Colorado's tight ends roamed through the Aggie defense with as much ease as 1,100-pound Buffalo mascot Ralphie IV entered Folsom Field.

A&M's linebackers were no match for CU's Joe Klopfenstein and Quinn Sypniewski in the flat. The receiving duo, who together weigh about half of Ralphie, combined for eight catches for 169 yards.

"They did a lot of different crossing things off their naked [bootlegs] and things," A&M coach Dennis Franchione said. "I don't know how much different they were, but they had some wrinkles that looked pretty good."

CU's passing attack also outflanked A&M's defense in the flats, often using running back Hugh Charles as a receiver. Quarterback Joel Klatt would hit Charles in stride, who would run free after a block from a wide receiver.

Charles had six catches for 85 yards. Bruising 235-pound Lawrence Vickers, who plays fullback, tailback and wide receiver, bullied his way through and around A&M's defense for five catches for 36 yards. And for good measure, even the simple down-and-out routes were open as Evan Judge had seven catches for 82 yards.

It added up to a 398-yard, three-touchdown day for Klatt, who played less than three quarters.

"We got off early on them and those big old Texas boys started breathing hard early," said Klatt, who was 28-of-36 passing. He was not sacked.

"It all starts with protection of the quarterback," CU coach Gary Barnett said. "I thought [offensive coordinator] Shawn Watson called a great game tonight. We were able to take advantage of some things that we saw on film with our offense."

It was a sobering game for the Aggies (3-2, 1-1), who came in with issues, despite a three-game winning streak. A&M was coming off a pair of closer-than-expected victories over Texas State and Baylor. A&M also had lost its last four games away from Kyle Field with three more road trips remaining this season.

"It's going to be a quiet plane ride home," said senior A&M free safety Jaxson Appel, who had eight tackles. "We came out and didn't play well. Colorado flat out beat us soundly."

A&M's problems started early. Wide receiver DeQawn Mobley dropped a potential 78-yard touchdown pass approximately 18 yards short of the end zone with CU recovering. Mobley was well ahead of the defender when he just dropped it.

"It's one of those things," Franchione said. "You can't miss opportunities like that when you're playing a good football team."

A&M senior wide receiver Jason Carter bemoaned the offense's inability to make plays, "so there is no telling what would have happened if we caught that first ball," he said.

McNeal was held under 200 yards passing for a second straight week - 146 yards on 10-of-21 passing. McNeal, the team's leading rusher for the year, was held to minus 14 yards rushing on five carries.

"The biggest key was closing the door on him early," CU defensive tackle James Garee said. "We did such a good job of stopping him before he could get to the corner and scramble too much."

CU, meanwhile, rolled up 548 yards through only three quarters.

"It was obvious that our team was ready to play tonight," Barnett said. "I knew they really wanted this football game for lots of reasons."

The Buffs had talked about avenging last year's 29-26 overtime loss at Kyle Field, when A&M linebacker Lee Foliaki stripped CU running back Bobby Purify of the football when it appeared the Buffs were driving for the game-winning touchdown.

Saturday against the Aggies the Buffs had no turnovers.

A&M's lone turnover was Mobley's fumble, but the Aggies were missing two starters - running back Courtney Lewis and defensive end Jason Jack - and reserve strong safety Japhus Brown. The trio didn't make the trip, because of injuries, said A&M sports information director Alan Cannon. Offensive tackle Corey Clark was hurt in the first half, and Foliaki was hurt in the second half. Neither returned.