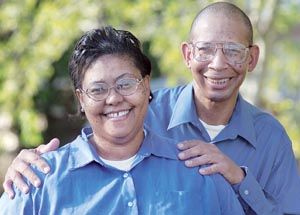 Sometimes the news just beats you down — from the meanness of an election year, to the wars and genocide throughout the world, to the thousands (maybe millions) of jobs leaving our shores in the name of globalization.

I have a friend — a kind, gentle soul — who describes himself as a pessimist. He’s a lovely man, but he’s lost his faith in the mass of humanity. Believe me, there are times I almost think he’s right.

I was sort of feeling that way Tuesday until I met my new hero, a woman named Cheryl Smith.

Cheryl is all that the human condition should aspire to. She’s articulate, warm, friendly, devout. She’s happily married for 20 years — to the “love of my life,” she says. A former second-grade teacher, she’s now a full-time volunteer, helping out wherever she can.

And she’s raised three children, all successful in their own right.

If we were all like Cheryl — and her husband, Zephaniah (Bobby to his friends) — the world would be an incredibly pleasant place in which to live. These two people are delighted with life, a celebration in life.

Back in the early ’80s, life wasn’t so good for Cheryl.

Cheryl Smith and her husband, Zephaniah — outside their home in College Station — look forward to every new day.

Shortly after the birth of her third child, she was diagnosed with post-partum depression. That diagnosis gradually grew to manic depression.

This past week, while listening to Cheryl talk in a calm, analytical fashion about life, it was hard to picture this gentle woman in the grips of a debilitating disease.

I’ve been exposed to the illness. I know how awful the consequences can be. If not treated, it will tear apart families, destroy careers, destroy children. And, yes, it can result in suicide. And those tragic results are so, so unnecessary.

I found a definition of the disease, courtesy of the Depression and Bipolar Support Association: “Bipolar disorder (also known as manic depression) is a treatable illness marked by extreme changes in mood, thought, energy and behavior. It is not a character flaw or a sign of personal weakness. Bipolar disorder is also known as manic depression because a person’s mood can alternate between the ‘poles’ [of] mania (highs) and depression (lows). This change in mood or ‘mood swing’ can last for hours, days, weeks or months.”

Bipolar disorder affects more than 2 million adult Americans. If you extrapolate to the local base, we probably have close to 2,000 people with the disease in the Brazos Valley.

The thing to remember, though, is that those 2,000 can be helped at relatively little cost to the rest of us. In fact, I would argue that helping them is an investment that returns huge dividends. Manic depressives who have controlled their disorder can contribute to society. They work, they have families, they pay taxes, they build things. If their illness is not treated, society pays a horrible cost.

The illness usually begins in late adolescence (often appearing as depression during teen years) although it can start in early childhood or later in life. An equal number of men and women develop this illness — men tend to begin with a manic episode, women with a depressive episode — and it is found among all ages, races, ethnic groups and social classes. The illness tends to run in families and appears to have a genetic link.

In Cheryl’s case, the first manifestations almost destroyed her life. Her then-husband deserted her, leaving her with three kids, all under age 7.

Her family could offer little support, not because they didn’t want to. Her mother was fighting her own demons, at that time, institutionalized for a variety of illnesses. Cheryl’s father let them move into his tiny house in Bryan, but that was “a terrible situation,” Cheryl says.

Her church referred her to the Mental Health Mental Retardation Authority of Brazos Valley. The road back had started.

The local MHMR folks put her through a progression of programs and introduced her to doctors who could prescribe the proper medication and therapy. We are fortunate to live in a world where the proper combination of support, therapy and medication can truly control this disease.

Early in her treatment, Cheryl met Zephaniah, who was working as a volunteer driver for a local social services agency. Evidently, it was love at first sight.

A few months later, “I asked him to marry me,” Cheryl says. “He became my guardian, my earth angel.

“Because of my faith in God and the support of Zephaniah, I do not fear another [manic] episode,” she says.

What would have happened if Cheryl had not found help through MHMR?

Cheryl’s answer is quick and chilling: “I probably would have committed suicide.”

That, to me, was a devastating answer because it illustrates the horrible depth of this disease. Cheryl is not a weak woman. Just the opposite. To me, she comes across as a woman of strong character and conviction, a gentle but tough woman who has faced down adversity.

I guess I should mention that at least two of the MHMR programs that brought Cheryl back from the abyss have disappeared, victims of a society that seems bent on eliminating social services. But that’s another rant that we’ll get into on another day.

Today, we celebrate Cheryl Smith and the people at MHMR who saved her life.

I had the pleasure last week of visiting the Messina Hof Winery and Resort for the first time.

Eating lunch and touring the facilities with Paul and Merrill Bonarrigo was a delight. The lunch was good, the wine was first-rate.

My roommate and I spent a few years in California, occasionally wandering through the wine country along the Central Coast and in the Napa Valley.

Texas wines have every bit of the flavor and substance of our cousins on the Left Coast.

Paul and Merrill’s operation is a prime example of the success that Texas vintners are reaping after decades of laying down a proper foundation.

And, as Paul says, it’s only the start.