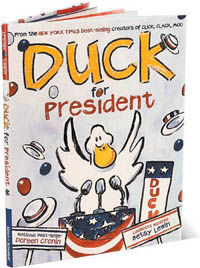 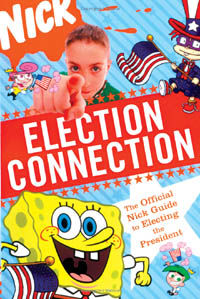 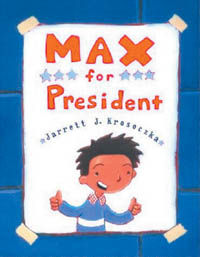 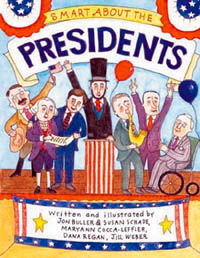 Quack up the kids

Groups working to get kids interested in elections and voting:

Sites created for kids by state secretaries of state:

NEW ORLEANS — How do you get preschoolers interested in a presidential election?

Get Duck on the ballot.

This isn’t just any duck, but Duck, the clever and demanding character from “Click, Clack, Moo,” “Giggle, Giggle, Quack,” and now “Duck for President.”

A presidential campaign wasn’t originally on his agenda.

Author Doreen Cronin had a different plot and title in mind.

“ The publisher at the time decided with the election year coming up, Doreen should write something about Duck in the White House,” illustrator Betsy Lewin said. (Cronin, having just had a baby, was not available.)

They went with it.

“ We thought it was a great idea. It was coming out in an election year, and bound to get great attention. We enjoyed the hoopla of the whole thing,” Lewin said. “Anyway, I think Duck really wanted to run for president.”

He discovers repeatedly that public office is “very hard work.”

For the ultimate discovery, Cronin echoed the picture of John F. Kennedy during the Bay of Pigs, photographed from behind as he leans on a desk.

And, as is common with all sorts of books these days, the publisher has a related activity guide for teachers to download from the Web.

It starts with questions: “Have you ever voted? What did you vote for?” and lists fun facts about the presidents, (“George Washington loved cream of peanut soup”), a crossword puzzle (“1. Voting takes place on Election —.”), and a page for a chapter of Duck’s autobiography.

The elementary school set has its own election fare.

Serious matters are an integral part of Eileen Christelow’s “Vote!” — though her book, for children in grades 1-5, is by no means dull or solemn. The book, a 2003 hardback, came out in paperback this summer with added activities and “Amazing Voting Facts!” inside the covers.

“ One of the biggest political problems in the United States today is the lack of voter turnout,” it begins. “In the 2000 presidential election, only about half of the nation’s voters (51 percent) actually voted!”

Christelow said its genesis was an utterly nonpolitical school visit to Hastings, Minn., to talk about her “Five Little Monkeys Wash the Car” and what it is to be an illustrator and author. The trip came during the 2000 presidential race between Democrat Al Gore and Republican George W. Bush.

“ I noticed that the schools had posters all over for Gore and for Bush and for pepperoni pizza,” she said. “I thought, ‘What is this all about?’”

Teachers told her that when they explained elections to children, especially in kindergarten and first grade, they began with a vote for favorite pizza.

She asked what books the teachers were using. They said they hadn’t found any, so she decided to write one.

Christelow developed an early interest in politics. In her early teens, she gave little children donkey rides to try to get their parents to vote for Democrat Adlai Stevenson rather than Republican Dwight Eisenhower.

Rather than a presidential campaign, the book features a mayoral race between the fictitious characters Chris Smith and Bill Brown.

Christelow said she decided against a race for president because she wanted to be generic rather than specific.

“ A mayoral election could be Anytown USA, nonspecific and nonpartisan,” she said.

Christelow, who lives in Vermont, got a civics lesson of her own when Secretary of State Deborah Markowitz bought a copy for every library and school library in the state.

“ That got me looking at her Web site,” Christelow said of Markowitz. “She has a wonderful site for kids and voting — things teachers can do in the classroom.”

“ This was another voter education thing I’d never even thought about. I’m not even sure I knew what state secretaries of state do.”

Other books include “Max for President,” written and illustrated by Jarrett J. Krosoczka for ages 4 to 8. It’s about a school election.

Max and Kelly, running for class president, cover the electioneering bases, making signs, buttons and promises they may have trouble keeping, such as “Vote for me and we will have more exciting morning announcements and better school lunches.”

Not all picture books are for the read-to-me set.

“ A Woman for President: The Story of Victoria Woodhull,” for ages 7-13 by Kathleen Krull, is about the first woman to try for the nation’s top job.

Woodhull campaigned in 1871, 49 years before women could vote, and Krull vividly describes the flamboyant and contradictory candidate who spent Election Day in prison, accused of obscenity.

The charge was brought because her newspaper had published an article alleging that Henry Ward Beecher, the vastly popular preacher and abolitionist, was having an extramarital affair.

The book doesn’t mention, possibly because of the ages it’s aimed at, that Woodhull advocated free love.

The same ages are targeted by “Election Connection: The Official Nick Guide to Electing the President.” The Nickelodeon characters illustrate a 78-page guide, including activities such as fill-in-the-blanks speeches to create positive and negative spin.

Its orange pages with bright blue type can strain middle-aged eyes, but the Nick folks presumably have studied what will draw kids’ attention.

“ Smart About the Presidents,” for ages 5 to 8, is part of a series which also includes books about money, ballet and a slew of biographies. It offers a paragraph, one or more illustrated additional facts, plus “Before he was president” and “Did you know this?” about each president.

Bush’s page has a blank for his last year in office, followed by fill-in-the-blank pages for the winner and loser of this year’s election.

Most, like “Duck,” have teacher guides available from the publisher.

Duck, having left Washington for the farm, will appear in an ABC book and a counting book.

Then, perhaps, the book originally suggested for No. 3. Lewin wouldn’t describe it, but did give the title: “Doobie, Doobie, Moo.”

“ You know,” Lewin mused, “if somebody should actually write Duck in and Duck wins, Doreen and I are running the country.”

Do they really want to?

“ No. I think we’d demand a recount first of all.”