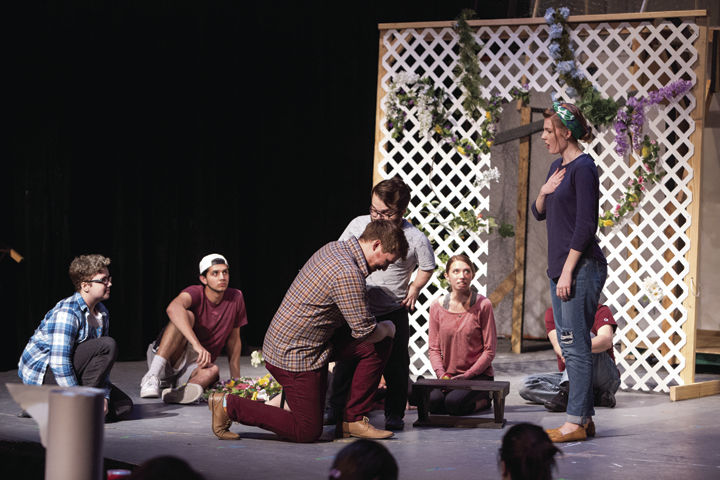 Zach Brattin as Sir Lancelot bows to Camilla Busselberg as Queen Guenevere in The Theatre Company’s production of Lerner and Loewe’s Camelot in 2018. 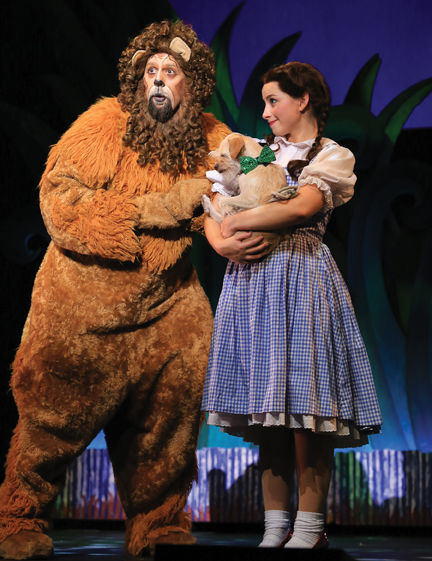 Victor Legarreta as the Cowardly Lion offers support to Dorothy, played by Kailee Kaimann, and Toto, played by Murphy, a white Brussels Griffon/Cairn Terrier mix. An American classic, The Wizard of Oz will be presented by MSC OPAS for two performances, at 7:30 p.m. Tuesday and Wednesday in Rudder Auditorium. Tickets for the family friendly show range from $35 to $90 and are available at the MSC Box Office on the first floor of Rudder Tower, by calling 979-845-1234 and online at www.MSCOPAS,org. 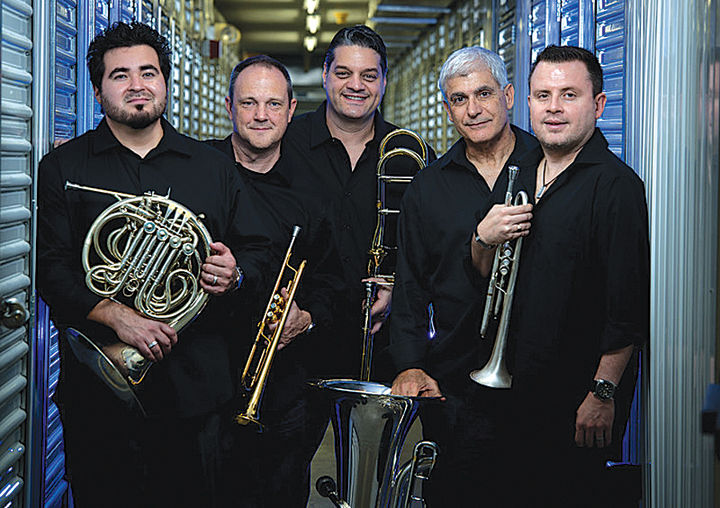 The Boston Brass will join with the University Wind Symphony and the Symphonic Winds for a concert in Rudder Auditorium at 7 p.m. Friday. Also appearing will be flutist Leslie Daniel Newman, a member of the 2007 class at Texas A&M. Tickets for the concert are $5, available at the MSC Box Office.

Zach Brattin as Sir Lancelot bows to Camilla Busselberg as Queen Guenevere in The Theatre Company’s production of Lerner and Loewe’s Camelot in 2018.

Victor Legarreta as the Cowardly Lion offers support to Dorothy, played by Kailee Kaimann, and Toto, played by Murphy, a white Brussels Griffon/Cairn Terrier mix. An American classic, The Wizard of Oz will be presented by MSC OPAS for two performances, at 7:30 p.m. Tuesday and Wednesday in Rudder Auditorium. Tickets for the family friendly show range from $35 to $90 and are available at the MSC Box Office on the first floor of Rudder Tower, by calling 979-845-1234 and online at www.MSCOPAS,org.

The Boston Brass will join with the University Wind Symphony and the Symphonic Winds for a concert in Rudder Auditorium at 7 p.m. Friday. Also appearing will be flutist Leslie Daniel Newman, a member of the 2007 class at Texas A&M. Tickets for the concert are $5, available at the MSC Box Office.

"Don't let it be forgot, that once there was a spot, for one brief shining moment, that was known as Camelot."

And Camelot, the kingdom and the musical, won't be "forgot" as The Theatre Company in Bryan opens a two-week run of Camelot at 7 p.m. Friday. Performances are Fridays and Saturdays at 7 p.m. and Saturdays and Sundays at 2 p.m. through March 4. Tickets are $20 for adults, $17 for seniors and students, and $7 for children 12 and younger. They are available at www.theatrecompany.com or at the box office one hour prior to each performance.

In 1959, Lerner and director Moss Hart were seeking a follow-up to the massive smash My Fair Lady by Lerner and Loewe. Lerner turned to T.H. White's novel The Once and Future King for inspiration about the legend of King Arthur, his brave Knights of the Round Table, the beautiful Queen Guenevere and the handsome Lancelot. Loewe was reluctant to take on the challenge of the musical, but relented.

Camelot is full of great music, from the title song to How to Handle a Woman, from If Ever I would Leave You to What Do the Simple Folk Do?, from Fie on Goodness to I Loved You Once in Silence. The original cast album sat atop the record charts for an amazing 60 weeks.

Off to see the Wizard

One of the most endearing stories of all time comes to life on the Rudder Auditorium stage Tuesday and Wednesday night when MSC OPAS presents The Wizard of Oz.

You know the story of Dorothy, the farm girl whisked from her Kansas farm to the magical Land of Oz. Along for the ride is her small dog, Toto. There, they encounter the Tin Man, who wants a heart, the Cowardly Lion who needs courage, and the Scarecrow, who wants a brain. Along the way, they meet witches good and bad and Munchkins.

The musical to be presented by OPAS pays homage to that film and will feature special effects, including an on stage tornado. Of course, it will features the much-beloved Harold Arlen songs Over the Rainbow, Ding Dong the Witch is Dead and If I Only Had a Brain.

Leading the cast as Dorothy is Kalie Kaimann. She previously played this role for the Children's Theatre of Cincinnati. She has also performed as Bonnie in Anything Goes, Logainne in 25th Annual Putnam County Spelling Bee, Ulla in The Producers, Millie Dilmount in Thoroughly Modern Millie, Belle in Disney's Beauty and the Beast, and Minnie Fay in Hello, Dolly! She received a Best Featured Actress in a Musical by BroadwayWorld.com for her performance as Minnie Fay.

Chris Duir will play the role of Scarecrow/Hunk, Christopher Russell will portray Tin Man/Hickory, and Victor Legarreta will portray the Lion/Zeke. Murphy, a white Brussels Griffon/Cairn Terrier mix with scruffy fur, will play Toto. Murphy was rescued from the ASPCA in Chandler, Arizona, by Lizzie Webb, music director for The Wizard of Oz tour, and was immediately welcomed into the theatre world. This will be his second time playing Toto. He even has his own hashtag: #montanamurphy.

The public is invited to a free concert celebrating the 500th anniversary of the Reformation at 5 p.m. today at St. Thomas Episcopal Church, 906 George Bush Drive in College Station.

Bach, Buxtehude, and the Reformation will be presented by the church and the Brazos Valley Chapter of the American Guild of Organists.

The concert will begin with the audience joining in on the singing of Martin Luther's great hymn, A Mighty Fortress is Our God.

The Reformation is one of the pivotal events in Western culture. Professor Adam Seipp will give a brief talk on the Reformation.

There will be a reception in the church Parish Hall following the concert.

The Brazos Valley African American Museum will honor local people during its 17th Annual Appreciation Banquet Friday night. The event is sponsored by the African American National Heritage Society and proceeds from the dinner will help the museum present programs to the community.

The dinner will be at 7 p.m. Friday at the College Station Hilton. Seating starts at 6:30 p.m.

Tickets are $50 or $500 for tables for 10. Ticket orders received after Feb. 9 will by open seating. To order tickets, go to www.bvaam.org.

The University Wind Symphony and the Symphonic Winds will perform at 7 p.m. Friday in Rudder Auditorium. Tickets are $5, available at the MSC Box Office on the first floor of Rudder Tower, by calling 979-845-1234 or online at boxoffice.tamu.edu. The concert is free for A&M students.

The Boston Brass will perform Rick DeJonge's Sounds of the Cinema with the University Wind Symphony and Malcolm Arnold's Fanfare for a Festival with the Symphonic Winds.

The Boston Brass has been thrilling audiences for 30 years with a blend of classical, jazz and original music.

A member of the 2007 A&M class, Newman is principle flute with the Richardson Symphony and second flute with the Shreveport Symphony. She has performed throughout the country and around the world in such places as Austria, the Czech Republic, England, Ireland and Scotland.

She will perform Concerto for Flute by Frank Ticheli with the Wind Symphony.

The Wind Symphony concert will include For the President's Own by John Williams, English Folk Song Suite by Ralph Vaughn Williams, and Symphony No. 2, Finale by David Maslanka.

The Symphonic Winds' performance will include Jeropo by Johan de Meij, Introduction and Vivace by Rick DeJonge, and Variations on a Korean Folk Song by John Barnes Chance.

Written by Peter Shaffer, Black Comedy takes place during a blackout. Brindsley, a sculptor, and his fiancée, Carol, have borrowed expensive furniture from a neighbor without permission in order to impress a millionaire art collector coming to view the young artist's work. When a blown fuse plunges the building into darkness, Carol's militant father arrives, the neighbor returns early, and Brindsley's ex-girlfriend shows up unexpectedly.

Black Comedy is the fourth play in the Blinn-Brenham Season of Dark Tales.

"It goes with our season because it takes place during a blackout and there is a gimmick that makes it a lot more fun to watch," said theater director Brad Nies. "When the stage lights are on, that is when our characters are in the dark but the audience can see. Then when the stage is in darkness, that is when the characters can see."

The play features highly exaggerated comedic moments and, despite its name, is light-hearted and family friendly, Nies said.

"There are going to be a lot of times when the lights come on and quickly go back off and so I have to make sure they go on cue," said sophomore Brianna Hyman, stage manager. "This is a comedy that the audience will definitely enjoy, and it is especially humorous watching the characters try to feel their way through the dark."

The play will be Blinn-Brenham's entry in the 2018 Texas Community College Speech and Theatre Association Play Festival.

Nies will direct the play, with Kevin Patrick serving as technical director, and Jennifer Patrick as costume designer.

• April 21 -- Annual Sundown Social sponsored by the Washington on the Brazos State Park Association at Rockin' Star Ranch in Brenham, featuring a steak dinner, cocktails and a performance by singer Dale Watson, 6 p.m. (979-830-1824 or office@wheretexasbecametexas.org)

Items for Arts Watch should be emailed to robert.borden@theeagle.com. Deadline is noon Tuesday before the weekend you want it to run.

A timely look at political corruption, wrapped in a slapstick comedy inspired by true events…

Who hasn't dreamed of inheriting a fortune when a relative dies? Monty Navarro has such a dr…

Growing up, my parents read to me after I got in bed each night. Some of my favorite stories…

By 1957, Richard Rodgers and Oscar Hammerstein II had become Broadway royalty. Oklahoma! had…

What is described as a "gripping and moving drama" with a good dose of humor opens a two-week run at Unity Theatre in Brenham Thursday night.

The amazing Concerts on Carter Creek closes its 2017-18 season at 5 p.m. today with a concert by the internationally acclaimed Russian pianist…