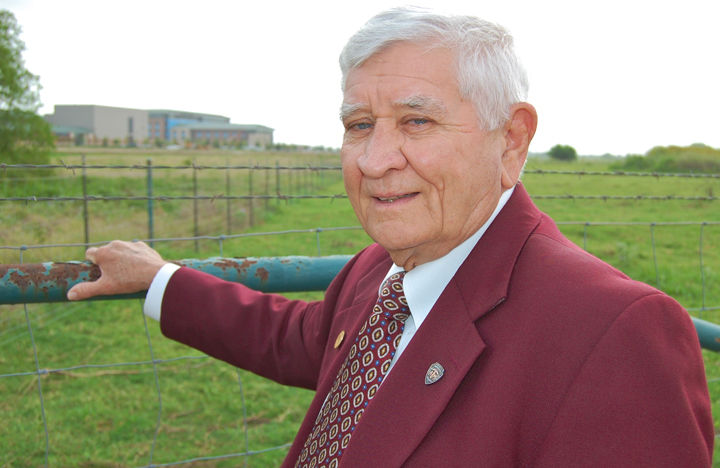 Texas A&M Associate Vice Chancellor Larry Boleman stands along a fence line bordering one of the old runways at the RELLIS Campus. Behind him are two of the newest buildings at the site: the Center for Infrastructure Renewal and the Texas A&M Transportation Institute headquarters. 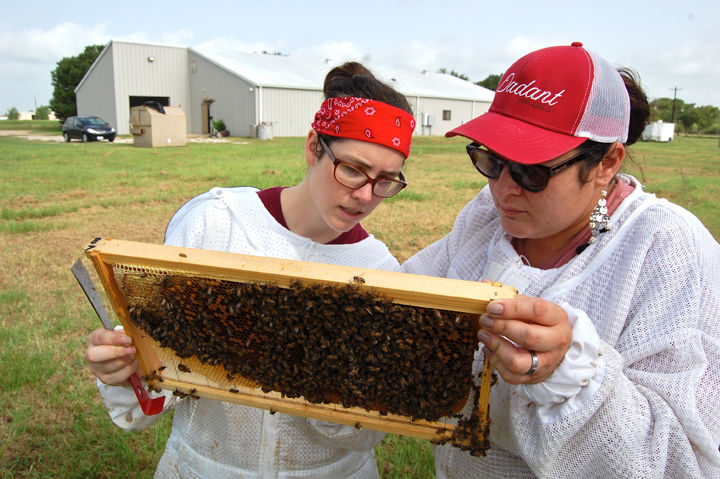 Texas A&M Associate Vice Chancellor Larry Boleman stands along a fence line bordering one of the old runways at the RELLIS Campus. Behind him are two of the newest buildings at the site: the Center for Infrastructure Renewal and the Texas A&M Transportation Institute headquarters.

Texas A&M's programs often involve animals, so it's no surprise to find them on campus, whether it's cows, horses or honey bees.

More than 50 years ago, it wasn't unusual to spot baboons on the property just west of Bryan at what today is called the RELLIS Campus

According to the Third Annual Report of the Texas A&M Research Annex, filed with the Department of Heath, Education and Welfare in 1965 and prepared by Texas A&M University in its "lease-to-own" arrangement for the property, eight baboons were a part of the animal population at the old Bryan Air Force Base.

The report outlined the "Anatomical and Physiological Studies of the Baboon" which sought "to establish normals for further studies involving the baboon as a laboratory animal for research."

Dr. Duane Kraemer was a highly acclaimed senior professor in the Texas A&M College of Veterinary Medicine and Biomedical Science. He is best known for leading a team of Aggie researchers in cloning the world's first cat in 2001.

Early in his career -- after earning bachelor's, master's and doctoral degrees from A&M -- Kraemer worked eight years with the Southwestern Foundation for Research and Education in San Antonio.

There, in the 1970s, he specialized in "contraceptive agents and embryo transfer" in baboons.

Livestock have been a fixture at RELLIS dating back to the early days of university involvement at the site.

In fact, baboons and bovines lived in harmony on the grounds of the Research Annex thanks to fences built by one of the Texas A&M University System's most popular and respected administrators.

Larry Boleman grew up on a farm in McLennan County. His ability to attend Texas A&M as a student hinged on a scholarship he received from the Waco A&M Mothers' Club in 1964.

When those funds ran out, young Larry was forced to find a job.

The job he found was with the Texas A&M Beef Cattle Center.

"Back when I was a student, the Beef Cattle Center was on what today is the West Campus," said Boleman, now associate vice chancellor for the A&M College of Agriculture and Life Sciences. "That land was then occupied by all the 'farms' of the agriculture school: cattle, horses, swine, poultry, and horticulture."

The Texas A&M Research Annex's nearly 2,000 acres nearby offered an opportunity for expansion. A decision was made to run a portion of the university's cattle herd there.

Thus, a need to build miles and miles of fences.

"And, it was hot," Boleman recalled of the summer of 1965. "The process was pretty low-tech. We took a post-hole digger, dug out the dirt, put in a pole and stretched the wire."

Boleman looks back on the early days of the Research Annex and marvels at how A&M was able to make innovative use of the old military base.

"Dr. Lowell Schake headed up that effort in the early '70s," Boleman said. "He took one end of an old runway, put up panels and shade, laid down dirt, brought in water and created a series of miniature feedlots for his students to oversee."

At about the same time, in 1974, the Parsons Mounted Cavalry got its start on a five-acre plot of land at the Research Annex, reviving a Corps of Cadets' tradition that ended with the onset of World War II.

Combat horsemanship had been a part of A&M's original military instruction when the school first opened in 1876, and a cavalry detachment endured on campus until 1943.

The Parsons unit remained on the RELLIS site for only a couple years. The detail then moved to its present location at Fiddler's Green, on the corner of Harvey Mitchell Parkway and F&B Road.

The most intriguing nonhuman occupants on today's RELLIS Campus are Apis millifera, otherwise known as the western honey bee.

The Janice and John G. Thomas Honey Bee Facility sits on the east side of RELLIS, away from the "buzz" of redevelopment activity ongoing at the location.

According to Juliana Rangel, the lab's director, new neighbors need not concern themselves with the approximately 2 million bees she and her staff oversee.

"We don't typically have any issues," Rangel said. "Our bees are quite gentle.

"Every now and then we have an aggressive colony," she admitted, "but we try to manage them by killing the queen, because she is the one producing the aggressive workers."

Bee entomology is a fascinating field. A queen lays as many as 2,000 eggs a day. Fertilized eggs hatch into female worker bees. Unfertilized eggs become drones, the males of a colony.

The bees you see hovering around plant life outside your home are worker bees completing tasks that mark the end of their four- to five-month lifespans.

Thanks in part to research being done at RELLIS, the "colony collapse disorder" crisis that threatened the global bee population for several years has dissipated.

Scientists now realize that insecticides previously used by apiculturists to eradicate the pestilent varroa mite, were often toxic to bees.

Keeping Texas beekeepers educated and informed is a component of the work done by Rangel and her team.

On the sweeter side of the A&M bee story, Rosenthal's Meat Science and Technology Center soon will be stocking Aggie honey again after a more-than-two-year absence.

A Brazos Valley breakfast biscuit's tastiest topping is a byproduct of the bees at the honey bee lab.

This will be the first honey to come from the new RELLIS Campus.

Sales are expected to begin sometime in September.

RELLIS Recollections: Three generations of the McNew family have ties to RELLIS campus

Editor's note: This is one in a series of stories on the history of The Texas A&M Univer…

The Texas A&M Ship Reconstruction Laboratory, unique among American universities, got it…

Editor's note: This is the final installment in a 16-part series of stories on the history of The Texas A&M University System's RELLIS Campus.