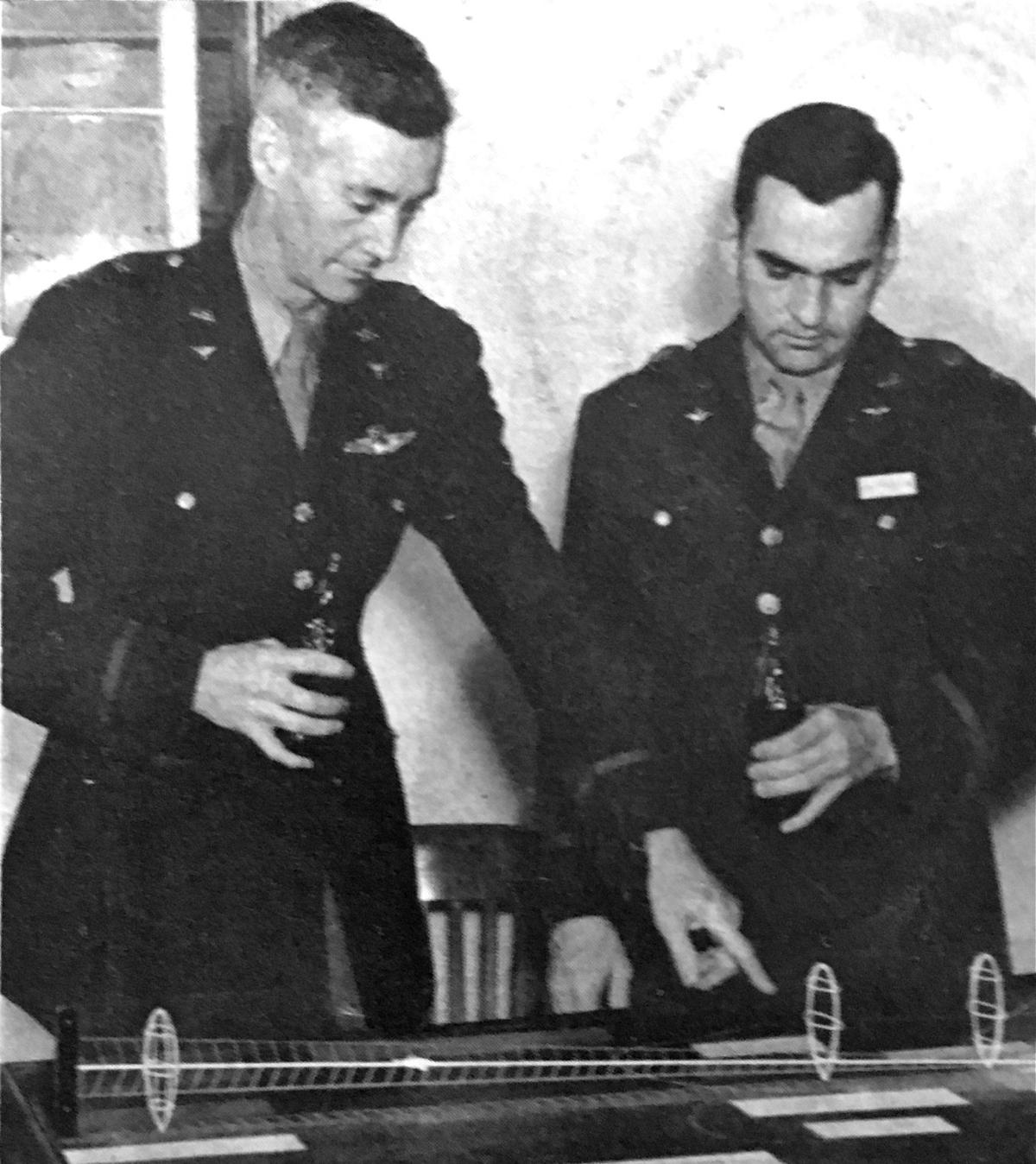 Col. Joseph B. Duckworth and Maj. John K. Ottley Jr. study a model of a glide path indicator while service as commanding and executive officers while at Bryan Army Air Field. 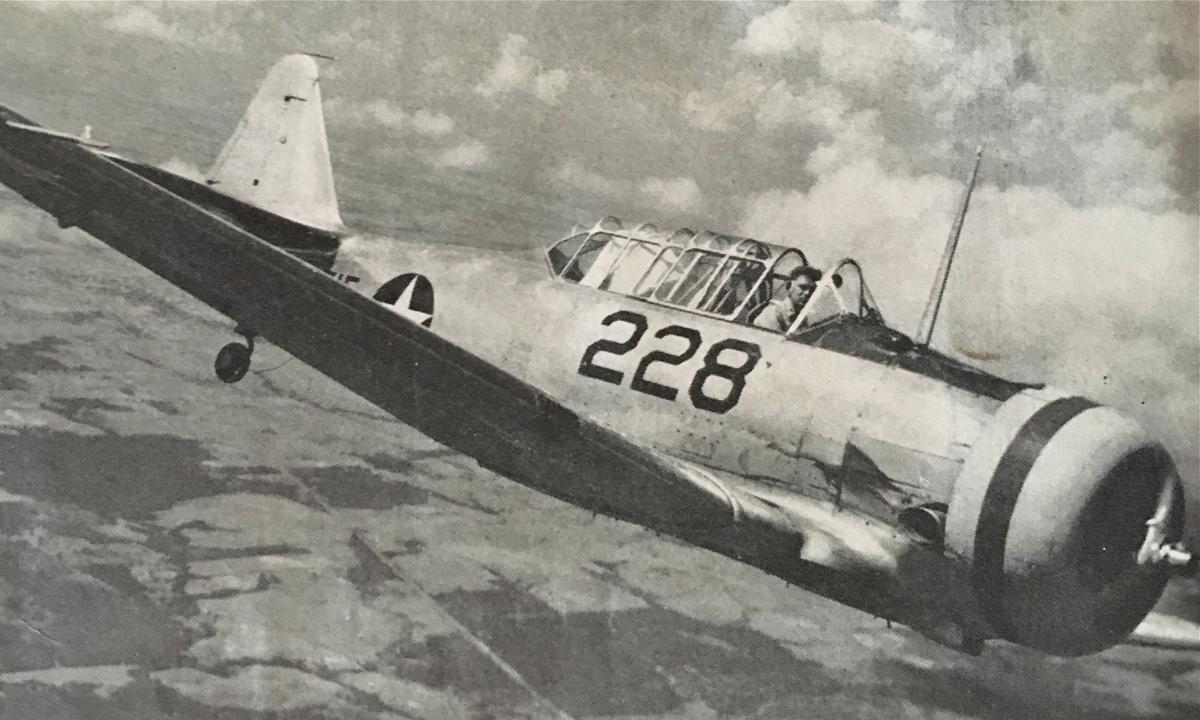 Joseph Duckworth became the first pilot to intentionally navigate into a hurricane when he flew an AT-6 Texan like this from Bryan Army Air Field into a storm off the Texas Gulf Coast on July 27, 1943.

Col. Joseph B. Duckworth and Maj. John K. Ottley Jr. study a model of a glide path indicator while service as commanding and executive officers while at Bryan Army Air Field.

Joseph Duckworth became the first pilot to intentionally navigate into a hurricane when he flew an AT-6 Texan like this from Bryan Army Air Field into a storm off the Texas Gulf Coast on July 27, 1943.

The world's first "hurricane hunter" made his maiden voyage from a rather unlikely place and for an unlikely reason.

The flight was not from a Caribbean island or initiated somewhere along the Atlantic seaboard of the United States.

Instead, the first intentional expedition into the midst of a tropical tempest was launched from the runways of Bryan Army Air Field in the summer of 1943.

Literally on a dare, the pilot guided a single-engine propeller-driven training airplane into a Category-2 storm off the Texas Gulf Coast near Galveston. He did so without approval or permission from his superior officers.

And then, later that same day, he flew back into the storm a second time.

At the helm on these unique missions was the man charged with leading the Army Air Forces' efforts to teach war-time aviators to fly solely on the readings of the instrument panels in their planes.

His name was Joseph Duckworth, and on the date of his historic achievement, he was the commanding officer at Bryan Field.

John Nielsen-Gammon is a regents professor at Texas A&M University and the Texas State Climatologist. While in college, he became enthralled with Col. Duckworth's story.

"What he accomplished is the meteorological equivalent of a trip to the moon," Nielsen-Gammon said.

As for what prompted Duckworth to make his history-worthy decision?

"It was a bar bet," Nielsen-Gammon said. "More accurately, it was a wager made over coffee in the morning mess hall at Bryan Field."

The National Oceanographic and Atmospheric Administration calls the weather system that struck the Texas coast July 27, 1943, the "surprise hurricane."

Wartime fears of German U-boat activity in the Gulf of Mexico mandated that all ships there maintained radio silence. In an era preceding radar and satellite imagery, the U.S. Weather Bureau relied almost exclusively on radio transmissions from ships at sea for its forecasting information.

So unexpected was the storm that struck the Texas coast in the summer of '43, 19 people died in its path with hundreds more injured.

When news of the hurricane reach Bryan Field, plans were made to either hangar or evacuate the base's inventory of aircraft.

Before Duckworth, Army pilots flew a rudimentary "1-2-3" methodology when visibility deteriorated during flight, using only the turn, ball-bank and airspeed indicators on their display panel. In the early years of World War II, more lives and aircraft were lost to inclement weather than actual combat.

Duckworth, a native of Savannah, Georgia, enlisted in the Army Air Corps in 1927, at the age of 25. He received his flight wings and a reserve commission while stationed at Kelly Field, near San Antonio.

As a civilian, Duckworth flew for Ford Motor Company and later Eastern Airlines.

Piloting commercial aircraft for 10 years -- with paying customers to ferry through blue or cloudy skies -- Duckworth gained a complete and practical understanding of full-instrumentation flying.

In 1940, Duckworth was called to active military duty and charged with changing the way Army pilots flew.

Duckworth was initially stationed in Columbus, Mississippi. Then after Pearl Harbor, plans were made for a dedicated instrument instructor's school.

That facility was located at Bryan Field.

A group of British aviators were among the cadre of students there in July of '43.

"The Brits, who were used to storms raking the British isles, were amused at the prospect of the Americans having to get their 'fragile' aircraft out of harm's way of the impending hurricane," said Nielsen-Gammon. "Colonel Duckworth took offense.

"So he wagered his English comrades that he could fly into the hurricane, come back and remain unscathed."

Lt. Ralph O'Hair was the only flight navigator on the field that morning. Sitting at the mess table with Duckworth and the British pilots, he was drawn into the debate.

When Duckworth turned to ask O'Hair if he would navigate the impromptu mission, the lieutenant agreed.

"Such was my respect for Duckworth and his flying abilities," O'Hair would later say.

As commander of the field, Duckworth was the ultimate local authority. But, he had superior officers elsewhere. He knew approval was impossible, both because of the risk to man and machine and the amount of time it would take to escalate the request up the chain of command.

Duckworth and O'Hair took off.

"While everyone else was trying to run away from the storm, Duckworth was flying toward it," Nielsen-Gammon said. "When they made radio contact with Houston air-traffic control, they were told to keep close track of their positions so that search parties could be sent out for rescue when the plane disappeared."

Sitting behind Duckworth as he flew threw the heavy rains of the outer bands of the storm, O'Hair pondered what it would be like to parachute out of an airplane inside a hurricane. He remembered, "being tossed about like a stick in a dog's mouth."

Then suddenly, all was quiet.

They had entered the eye of the storm.

Above them bright clouds appeared. Below, they could see land. O'Hair estimated the diameter of the eye to be nine or 10 miles. He described the shape of the center as a "leaning cone." Duckworth circled inside the storm's calm interior for a time.

Aligning the aircraft toward home, they punched back into the hurricane on the return flight to Bryan Field. Heavy rains and gusting winds pounded the plane. Duckworth's confidence in flying through zero visibility was absolute.

Upon landing back at Bryan Field, there was little time to celebrate. The field's weather officer, Lieutenant William Jones-Burdick was standing on the flight line.

"Burdick requested permission to go back into the storm," Nielsen-Gammon said.

"So, after making the first intentional flight into a hurricane, Duckworth then made the first scientific flight on the same day."

That night on post, the achievement was celebrated. Never again would anyone doubt the durability of the North American aviation-made AT-6 Texan trainer.

Within a year, the Army Air Forces established a weather reconnaissance squadron. By 1946, those who flew missions for that group were officially called "Hurricane Hunters."

They still fly today as the 53rd Weather Reconnaissance Squadron of the Air Force Reserve.

Duckworth retired from the Air Force in 1955 and became head of the safety bureau of the Civil Aeronautics Board. He died July 26, 1964, in Battle Creek, Michigan, one day shy of the 21st anniversary of his historic flights.

A historical marker outside the east entrance to the RELLIS Campus details Duckworth's remarkable wartime achievement.

Tim Gregg is a consultant hired by A&M System Chancellor John Sharp to create RELLIS Recollections, a project to preserve the history of the RELLIS Campus site. He can be reached via email at history@rellisrecollections.org.

Ione Lay looked proudly at her eldest son, Billy. She nodded approvingly as she prepared to say goodbye.

They don't make local sportswriters -- or sports stories -- like they used to.

Last night at Avenger Field in Sweetwater, a sellout crowd of more than 300 attended a dinner and memorial service at the National WASP World …

On the afternoon of July 20, 1969 -- a Sunday -- Dick Zimmer sat behind the steering wheel of his VW Bug, driving east along Interstate 10.