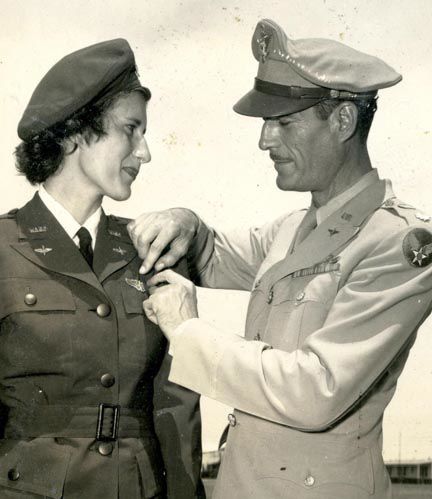 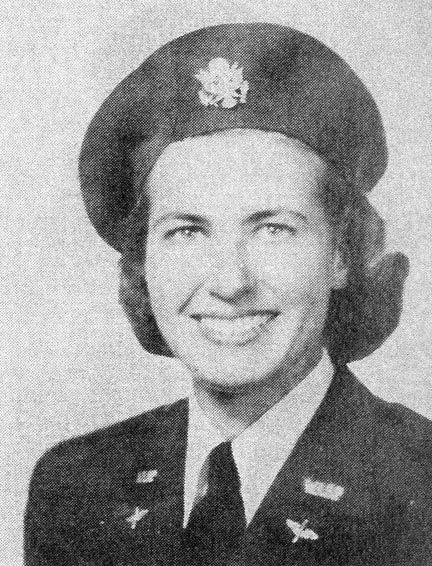 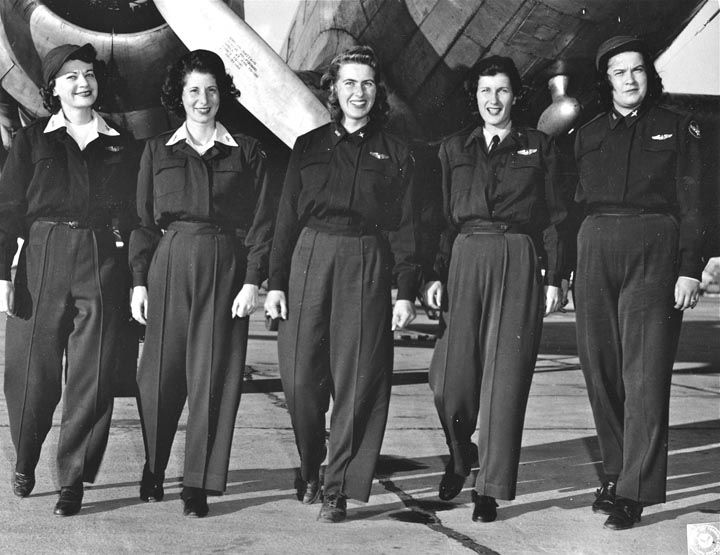 From left to right: Unknown, Ruth Westheimer, Suzanne DeLano, Joan Michaels, Catherine D’Arezzo. DeLano and Michaels reported for duty August 10, 1944 for six weeks of ground school and Instrument Instructor Training Course. They were the first and only permanent-based WASP at Bryan.

From left to right: Unknown, Ruth Westheimer, Suzanne DeLano, Joan Michaels, Catherine D’Arezzo. DeLano and Michaels reported for duty August 10, 1944 for six weeks of ground school and Instrument Instructor Training Course. They were the first and only permanent-based WASP at Bryan.

Last night at Avenger Field in Sweetwater, a sellout crowd of more than 300 attended a dinner and memorial service at the National WASP World War II Museum.

The event marked the 75th anniversary of the Women Airforce Service Pilots and celebrated their contribution to the U.S. war effort.

Five of the 55 living WASP were in attendance. The youngest in Sweetwater this weekend is 95 years old.

Out of more than 20,000 candidates, 1,074 women flew for the Army Air Forces from September 1942 through December 1944. They ferried and flight-tested aircraft, towed gunnery targets and transported equipment and personnel.

Their duties enabled men to serve in active combat roles.

Unlike their male counterparts, each WASP personally paid for her own transportation costs to training sites, for her dress uniforms there and for room and board.

When a WASP died in service to country, families were financially responsible for the return home of their daughters' remains.

Not until 1977 were WASP finally given "veteran" status and made eligible for military benefits.

Even then, the legislation was vigorously opposed by the Veterans Administration, the American Legion and the Veterans of Foreign Wars.

In fact, for more than 30 years following the conclusion of World War II, all WASP records were sealed by the government and the women were told to keep quiet about their wartime experience.

But during the war, their involvement was big news.

A Monday, April 24, 1944, front-page story in The Bryan Daily Eagle announced that a "cadre" of 14 WASP had begun the Instrumentation Pilot Instructors' Course at the AAF "University of Instrument Flying" at Bryan Field.

The story cited the women's status as civilian pilots, but emphasized they would be receiving the same training as their male military counterparts.

Several more groups of WASP came through Bryan Field for training during World War II, but according to the official WASP archives at Texas Woman's University in Denton, only two were permanently stationed at the base.

Suzanne DeLano and Joan Michaels reported for duty at Bryan Army Air Field on Aug. 10, 1944. After completing the Instrument Instructor training course, they remained at Bryan until the WASP program was deactivated on Dec. 20, 1944.

At the outset of World War II, Arnold opposed the idea of women serving as pilots in the Army.

Eventually he acquiesced, principally because men were needed for oversees duty.

Still, while women were allowed to fly, Arnold rejected the idea they be commissioned into the Women's Army Auxiliary Corps.

Gradually, he changed his mind about that, too.

DeLano was born in New York City and raised in France, a child of privilege and the granddaughter of William E. Upjohn, founder of the Upjohn pharmaceutical company.

DeLano loved horses and upon her return to the U.S. intended to be a veterinarian, but a bad spill, resulting in a broken ankle, changed her plans.

While recuperating, "I was restless, getting on my mother's nerves," Suzanne DeLano Parish said in later years, "so she suggested I take flying lessons.

"I loved it so much that flying became my passion."

DeLano earned her WASP wings in Sweetwater, where all WASP went through the exact same seven-month basic training program as the Army Air Forces' male cadets.

She was assigned to Bryan Field as a "test pilot." DeLano flew with men returning from oversees combat duty who needed instrument flying time. In addition, she flight-tested repaired planes to ensure they would be safe for men to fly.

After the war, DeLano married Preston Parish, a Marine Air Corps veteran. The couple settled in Kalamazoo, Michigan, where Upjohn's corporate headquarters were located. Desperately wanting to continue to fly, Suzanne was rejected at every turn in her efforts to become a pilot for an aviation company or airline.

Finally, she lobbied her uncle, John Gilmore, for a job as a corporate pilot for the family's pharmaceutical business.

As president of the company, Gilmore said no, too.

Suzanne and her husband established the Kalamazoo Aviation History Museum in 1977, known today as the Air Zoo. More importantly, they bought a partial interest in an airplane and Suzanne resumed her flying career. For more than a quarter century, she dazzled air-show audiences around the country flying her pink Curtiss P-40 Warhawk.

Joan Michaels' father, Marion Grevenberg flew pursuit planes in World War I. A flight with his daughter over the Statue of Liberty triggered her love of flying.

By the time the WASP program was established, Joan, from Virginia, was ready to follow in her father's footsteps. With her pilot's license in hand and ample flight time under her belt, she qualified to become an aviatrix.

No one was more proud of Joan than her father. At her Avenger Field graduation ceremony, Joan's father, by that time a lieutenant colonel in the wartime Army Air Forces, pinned on his daughter's silver wings.

Joan and Suzanne DeLano were classmates. Both reported for duty at Bryan Field in the late summer of 1944.

Both knew their time in service to country would be short.

Witnessing the WASP's stateside contributions to the war effort, Hap Arnold's opinion of women serving his Army Air Forces changed dramatically. He became a supporter of a plan to commission WASP pilots in the Army.

But an effort to gain Congressional approval for the measure fell short of passage.

Frustrated by the lawmakers' decision, Arnold announced on June 26, 1944, the WASP program would be discontinued by year's end.

That December, just days before the WASP would be dismissed, Arnold spoke at Avenger Field.

"The WASP has completed its mission. Their job has been successful. But as is usual in war, the cost has been heavy. Thirty-eight WASP have died while helping their country move toward the moment of final victory. The Air Force will long remember their service and their final sacrifice."

Sixty-five years later, in 2009, Barak Obama signed a presidential order presenting each and every WASP with a Congressional Gold Medal, the nation's highest honor for civilians.

Among the 300 or so surviving WASP honored by presidential decree: Suzanne DeLano Parish and Joan Michaels Lemley.

After earning her wings at Avenger Field, Parker was stationed at Marana Airfield in Tucson, Arizona. After the war, she returned to Bryan, married Roland Chatham and helped grow his photography business by flying him for aerial shots.

In The Eagle series "Brazos Valley Veterans," Bryan attorney Bill Youngkin interviewed Chatham, who died in 2016, about her time as a WASP.

"I loved to fly," she told Youngkin. "My first solo was an exhilarating experience.

"I never got tired of looking down at the world I came from."

Tim Gregg is a freelancer hired by A&M System Chancellor John Sharp to create RELLIS Recollections, a project to preserve the history of the RELLIS Campus site. He can be reached via email at history@rellisrecollections.org.

They don't make local sportswriters -- or sports stories -- like they used to.

Ione Lay looked proudly at her eldest son, Billy. She nodded approvingly as she prepared to …

RELLIS Recollections: Bryan Field officer flew into a tropical storm on a bet

The second man disembarking the transport shuttle shifted gingerly from the front passenger seat of the van.

There was a time in America when a boy's interest turned to cars rather than computer games, smartphone texts or Instagram.

The closure of Bryan Army Air Field at the conclusion of World War II was a major economic blow to the area.

On the afternoon of July 20, 1969 -- a Sunday -- Dick Zimmer sat behind the steering wheel of his VW Bug, driving east along Interstate 10.

The Texas A&M Ship Reconstruction Laboratory, unique among American universities, got its start in an old military barracks at what is now…