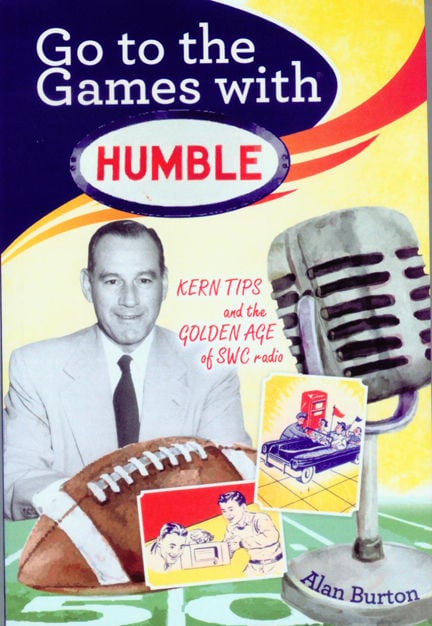 Go to the Games with Humble: Kern Tips and the Golden Age of SWC Radio by Alan Burton (Anarene Books, $17.95 paperback). 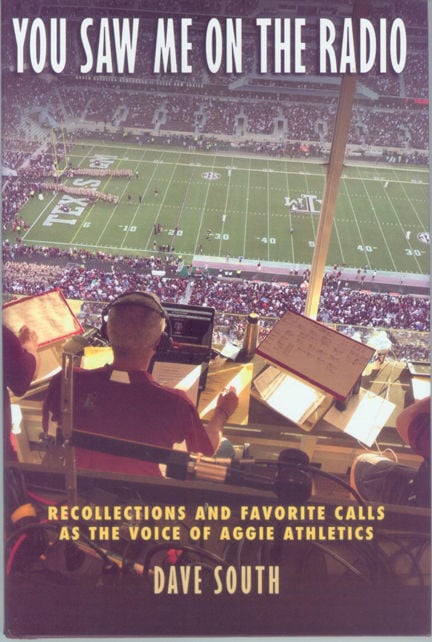 You Saw Me on the Radio: Recollections and Favorite Calls as the Voice of Aggie Athletics by Dave South (Texas A&M University Press, $25 hardcover).

Go to the Games with Humble: Kern Tips and the Golden Age of SWC Radio by Alan Burton (Anarene Books, $17.95 paperback).

You Saw Me on the Radio: Recollections and Favorite Calls as the Voice of Aggie Athletics by Dave South (Texas A&M University Press, $25 hardcover).

Alan Burton traces the history of the old Humble-Enco-Exxon broadcasts of Southwest Conference football in his Go to the Games with Humble: Kern Tips and the Golden Age of SWC Radio (Anarene Books, $17.95 paperback).

Kern Tips was the dean of SWC radio men, working for the Humble-Exxon network for more than 30 years before retiring in 1966. He died the next year.

Most college teams today have their own in-house team of announcers, but for more than 40 years in the Southwest Conference, Humble provided objective, unbiased, game-day broadcasts. To keep the announcers from becoming too attached to the teams they were covering, Humble rarely assigned them to the same team two weeks in a row.

Announcers were not allowed to mention if a player got injured, not wanting the player’s family to hear about it for the first time on the radio, and they were required to give the score often. One announcer kept a three-minute hour glass in the booth to remind him to update the score.

The broadcasts always included the school songs before the game and the bands’ halftime performances. The only advertisements during a game would be for Humble Oil — and even those were limited to 12 a game.

Burton provides a list of 85 men who broadcast SWC games for Humble, with Tips as the leading play-by-play announcer for 30 years, followed by Connie Alexander for the last 10 years of the Humble-Exxon network, which ended its run in 1977.

One of the Humble-Exxon broadcasters, from 1970-77, was Dave South, who went on to become the voice of Texas A&M football, basketball and baseball for more than 30 years. He still broadcasts the Aggie baseball games but retired from football in 2017.

South has written a lively memoir full of anecdotes about his broadcasting career, You Saw Me on the Radio: Recollections and Favorite Calls as the Voice of Aggie Athletics (Texas A&M University Press, $25 hardcover).

In short, readable vignettes, South traces some of his most memorable Aggie games, people he’s met along the way, and one chapter simply labeled “goofs” about not taking himself too seriously.

Of course, South tells in rich detail the story about when he was ejected by a referee from an Aggie basketball game on March 12, 1993. During a time-out, South noticed one official was watching him very closely.

“I had a soft drink in my left hand and lifted it to give him a toast,” South writes, “and with my right hand gestured to him with a quick choke sign to my throat. That took about five seconds. The official turned and went to the baseline and returned with a security guard and started yelling at me that I was gone.”

The ejection made South something of a celebrity, even inspiring a week’s worth of Tank McNamara comic strips. Rival Texas Longhorn basketball coach Tom Penders hugged him and whispered, “You are my new hero.”

For a more complete account of South’s book, see Travis L. Brown’s feature article in the Sept. 21 edition of The Eagle.

Glenn Dromgoole writes about Texas books and authors. Contact him at g.dromgoole@suddenlink.net.

TEXAS READS: New history volume by best-selling novelist is a delight to read

Great Texas Line Press, which specializes in small books that pack a big punch, has publishe…

I’ve already written about several books having to do with Texas football in the past few weeks, and here are four more new ones worth reading…

TEXAS READS: Erickson gives the dish on Hank the Cowdog

Finding Hank is an attractive new oversized hardcover book containing the most commonly asked questions about Hank the Cowdog and his creator,…