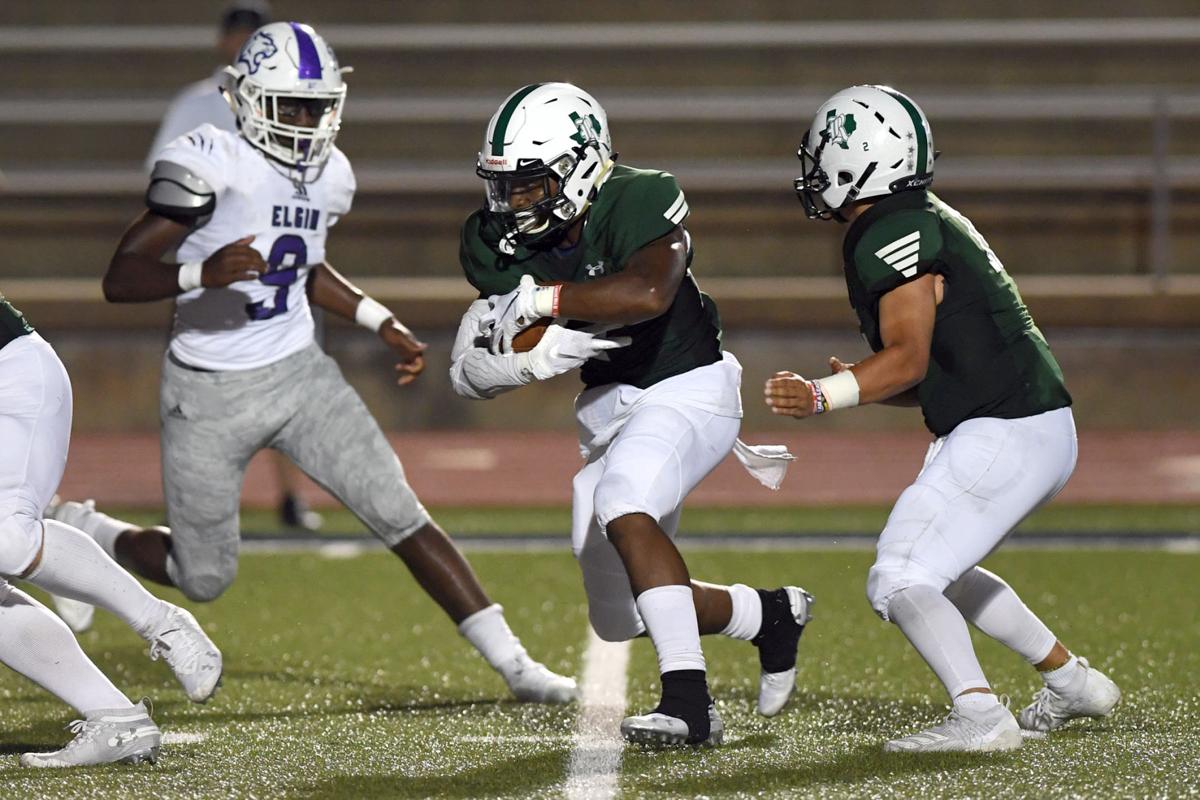 Rudder's James Ayers (7) carries the ball on his way to scoring a touchdown in the second quarter against Elgin Friday at Merrill Green Stadium.

The Rudder football team has made a habit of bouncing back this season.

For the first time since Week 1, the Rangers will have to do that between games rather than during them.

In the middle of facing a key stretch of contenders to open District 10-5A Division II, Rudder (3-2, 1-1) split games against Montgomery and eighth-ranked Lamar Consolidated and will face undefeated Katy Paetow at 6:30 p.m. Friday at Legacy Stadium.

If Rudder can beat the surprising Panthers (5-0, 2-0), the Rangers’ goal of making the program’s first postseason appearance would come into focus after going 2-1 against the primary contenders for the district’s last two playoff spots.

After mounting comebacks in three straight wins over Elgin, Navasota and Montgomery, the Rangers hung with the Mustangs last week until late in the third quarter in a 45-16 loss. The game snowballed on Rudder as it tried to claw back in the fourth, something that comes with the territory of taking risks when trailing, Ezar said.

Ezar said he was proud of the way his defense played against Lamar Consolidated and hopes that will carry over against a Paetow offense averaging a district-leading 451.8 yards per game. Rudder limited Lamar Consolidated running back Taye McWilliams to 98 yards on 17 carries, well below the district-leading rusher’s yards per game and yards per carry averages. Next up, the Rangers will face the district’s Nos. 2 and 3 rushers in Jonathan Jolly and Damon Bankston, both averaging over 10 yards per carry. Quarterback CJ Dumas Jr. has been efficient, tossing 14 touchdown passes to one interception.

“They’re not as explosive as much as they’re efficient,” Ezar said. “They’re going to hand the ball off, get 4 or 5 [yards], hand off, get 4 or 5, and then they’re going to surprise you with a bootleg and get 20 yards. They’re just methodical in what they do. They don’t make a lot of mistakes. You’ve got to get them off the field.”

The Rangers aim to get back to generating explosive plays on offense that marked their first four games of the season. Sophomore quarterback EJ Ezar along with his bevy of playmakers that include senior running back James Ayers and senior receivers Keithron Lee and Malcolm Manley should be able to bounce back against Paetow’s defense, which despite allowing just 149 yards per game, hasn’t faced an offense as capable as Rudder’s.

“We’re in the middle of the season, so it’s definitely a grind as you get to practices and trying to get ready,” Ezar said. “They’re definitely picking each other up, and they keep pushing each other forward.”

Photos from the football game between Navasota and Rudder in Navasota on Friday, Sept. 13, 2019.

You don’t have to look far to find high school football matchups with big-time implications this week.