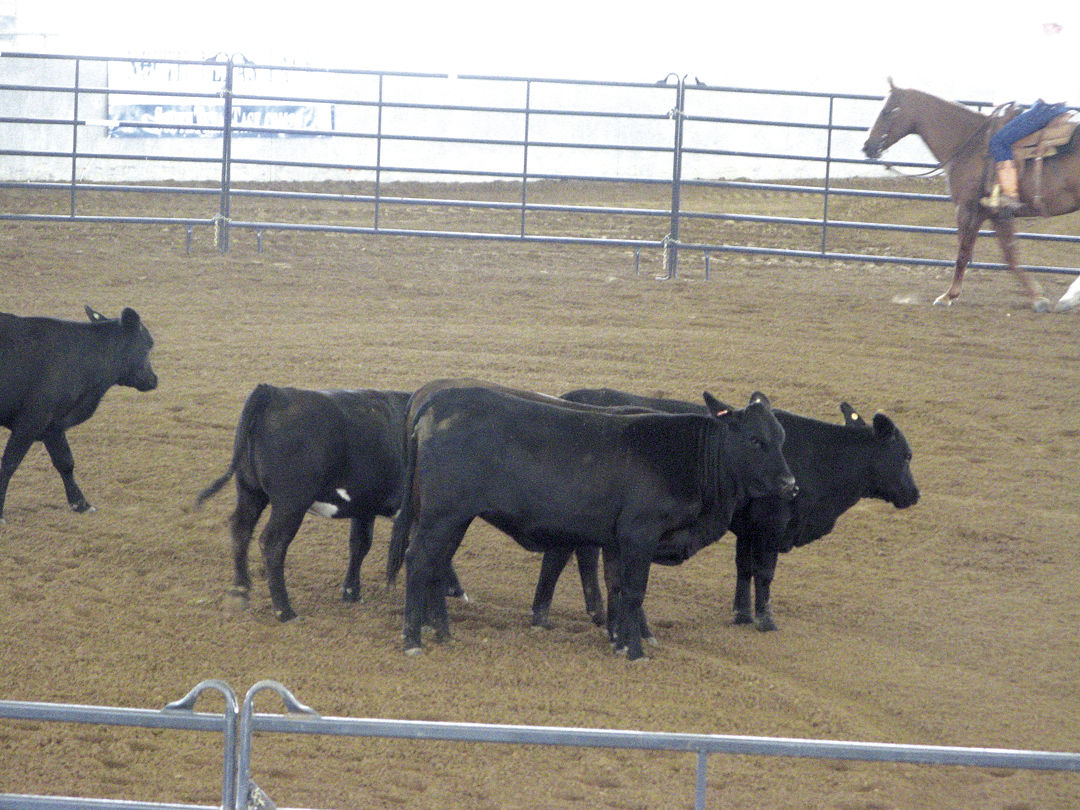 Production capability of these calves is largely determined by inherited genetics. 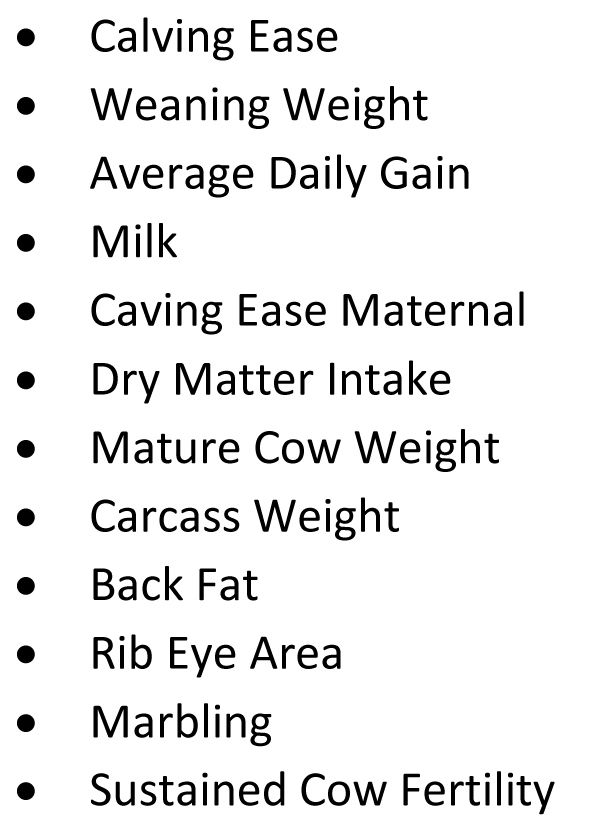 Production capability of these calves is largely determined by inherited genetics.

Breed associations make a big contribution to the cow-calf sector through their development of genetic evaluation systems. These systems provide commercial cattlemen with tools for selecting herd sires that can deliver genetic improvement to herd progeny.

"EPD (expected progeny difference) is a basic tool that has been in use for several years," Saatchi said. "It is the expected difference in future progeny performance of an individual relative to other individuals.

The American Angus Association describes contemporary group as a set of animals that have had an equal opportunity to perform -- same sex, managed in the same way and exposed to the same environmental conditions and feed sources. Contemporary groups are the cornerstone of genetic evaluation.

A more recent developed tool for genetic improvement is the use of DNA (deoxyribonucleic acid) analysis. Oxford Dictionaries describe DNA as a self-replicating material which is present in nearly all living organisms. It is the main constituent of chromosomes and is the carrier of genetic information.

"DNA is composed of molecules that contain a phosphate group, sugar group and a nitrogen base," said Rachael Rettner of the website Live Science. "The four types of nitrogen bases are adenine (A), thymine (T), guanine (G) and cytosine (C). The order of these bases in DNA is what determines its instructions or genetic code. Similar to the way letters of the alphabet are used in various combinations to form words, the various arrangements of nitrogen bases in DNA form different genes.

"Molecules of DNA are attached together to form two long strands that spiral to create a double helix," Rettner said. "If you think of the double helix as the structure of a ladder, the phosphate and sugar molecules are the two sides and the bases are the rungs.

"Bases on one strand pair with bases on another strand. Adenine pairs with thymine and guanine pairs with cytosine. DNA molecules are so long that they are coiled tightly to fit inside a cell. The tightly coiled helixes are called chromosomes which contain a single DNA molecule."

Genomes are full sets of chromosomes that contain all the heritable traits of an organism. Genomic markers are used to measure relationships between animals. According to the National Cancer Institute, a genetic marker is a specific sequence of DNA at a known location on a chromosome. Genetic markers and genes that are close to each other on a chromosome are usually passed from a parent to the offspring. Examples of genetic markers are single polymorphism nucleotides (SNPs) and microsatellites.

"Genomic selection using SNPs is a powerful tool for selecting breeding animals," said George Seidel Jr. of Colorado State University. "Current SNP profiles for individual animals are generated using a small plastic computer chip that can diagnose as many as 50,000 or more SNPs throughout the bovine genomes (sets of chromosomes). Phenotypes, what organisms look like and how they perform, are usually averaged over offspring of bulls and matched mathematically with SNP profiles. This allows ranking herd sires for their ability to produce desirable phenotypes through their SNP profiles.

"Performance history, pedigree and SNP profiles are combined through computer models to calculate GE-EPDs," Seidel said. "If GE-EPDs are available, the standard non-enhanced EPDs are obsolete and generally not available. GE-EPDs are replacing standard EPDs because they are much more accurate."

"Several beef breed associations have developed and released economic (profit) indices to aid producers in making selection decisions. Economic indexes allow for multiple-trait selection or simultaneous selection for more than one trait," said Matt Spangler, Extension beef cattle breeding and genetics specialist with Nebraska Extension. "These indices are derived by combining multiple EPDs, each weighted by an economic value, into one numeric value often expressed in dollars per animal."

Shane Bedwell, chief operating officer and director of breed improvement with the American Hereford Association, was the second speaker in the webinar. The American Hereford Association produces EPDs for 17 traits and calculates three profit indices. Their genetic evaluations involve the use of a marker effects model that allows calculation of EPDs through incorporation of pedigree and phenotypic and genomic profiles of an animal.

"Before choosing which ERTs to use in herd sire selection, a producer should identify his breeding or marketing goals and the traits that directly impact profit. Some producers have environmental constraints which dictate the acceptable performance level for a given trait."

Bedwell discussed the American Hereford Association New Baldy Maternal Index which originally was formulated in 2004 and expanded in 2017. ERTs used in the New Maternal Index are shown in Table 1. The index is built on the assumptions that Hereford bulls are used on mature Angus cows and daughters are kept in the herd. It also assumes that the producer sends cull heifers and steers to a feedlot while retaining title and then markets on the grid.

Tommy Perkins, executive vice president of the International Brangus Breeders Association, IBBA, was the next speaker in the webinar. He reported that IBBA has more than 2 million genetic records with approximately 25 thousand Brangus represented. Perkins briefly discussed the value of GE-EPDs and then described new genetic evaluation systems developed by IBBA and those in which the association has an interest in developing.

New reproduction trait EPDs available for Brangus cattle include heifer pregnancy, stayability and mature cow weight. New selection indices are listed in Table 2. IBBA is interested in establishing EPDs to predict climate adaptation which would include thermotolerance and hair shedding. The ability to shed hair gives an animal a better chance of adapting to warm climates. IBBA is also interested in developing an EPD for feet and leg scoring.

The webinar was concluded with a presentation on the next generation of genetic selection by Kelli Retallick, genetic services director of Angus Genetics Inc. Angus Genetics is a for-profit, wholly-owned subsidiary of the American Angus Association. They are the leading provider of genetic information to the beef industry. AGI delivers genetic evaluation services to the American Angus Association and five other breed organizations.

"During 2019, AGI released two new EPDs -- foot structure (claw set and foot angle) and high-altitude disease (pulmonary arterial pressure). We are also updating our dollar values for the indices," Retallick said. "Using a survey completed by our members, revised economic and production inputs were put into a more sophisticated model."

Genetics is hard to understand without formal training in the subject. This, however, should not cause cow-calf producers to shy away from using EPDs, GE-EPDs and economic indices for bull selection. Most breed associations have field service representatives that are willing to help decipher genetic data. In addition, reputable seedstock producers are willing to help select sires that match the ranch environment, production goals and management style.

DNA - Breed associations make a big contribution to the cow-calf sector through their development of genetic evaluation systems.

Calves - Production capability of these calves is largely determined by inherited genetics.