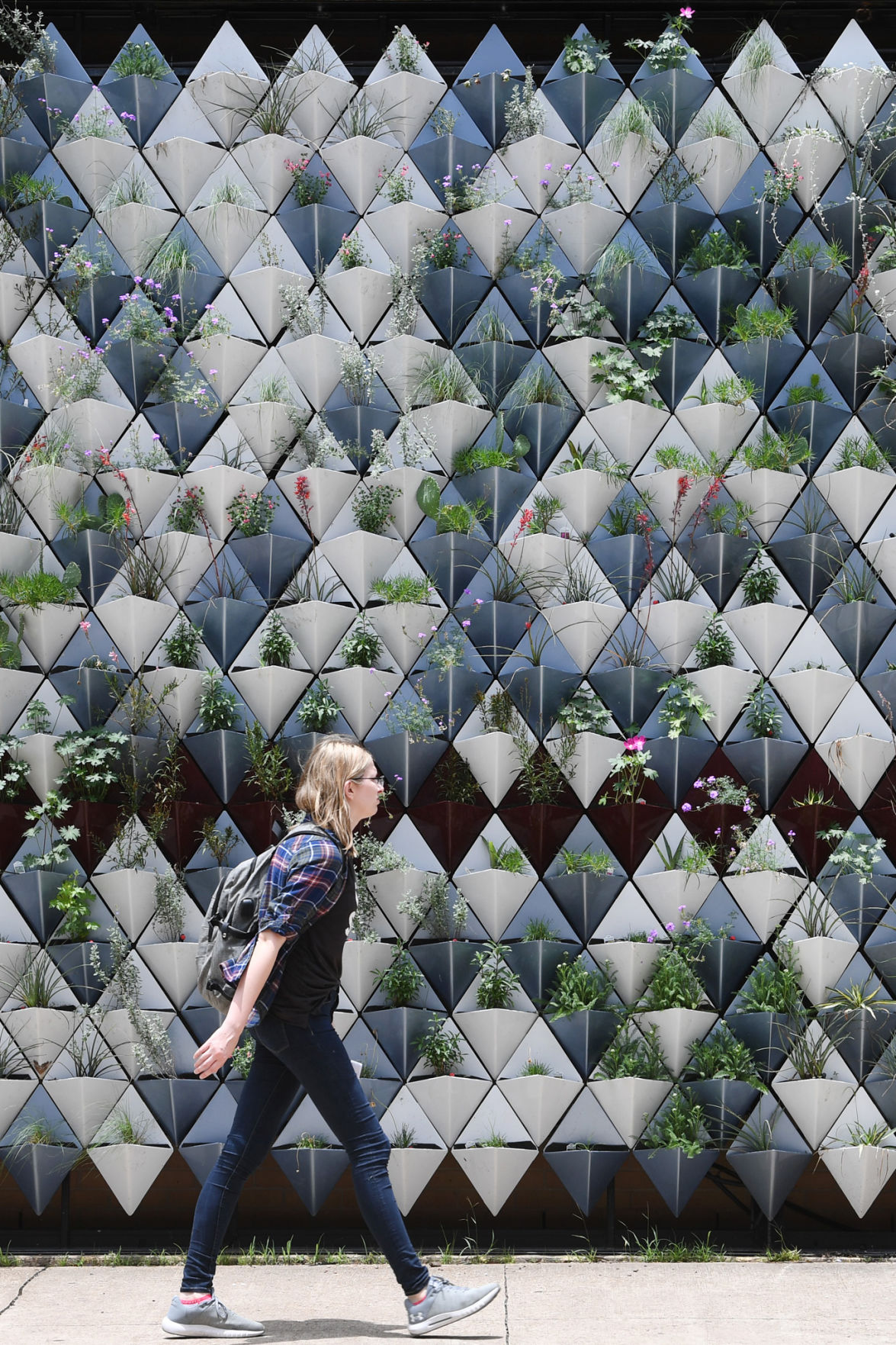 Texas A&M senior Ashley Tucker walks past the new Living Wall on the side of the Langford Architecture Center’s building B on Wednesday. The wall, which is made of sheet metal byproducts, features native plants. 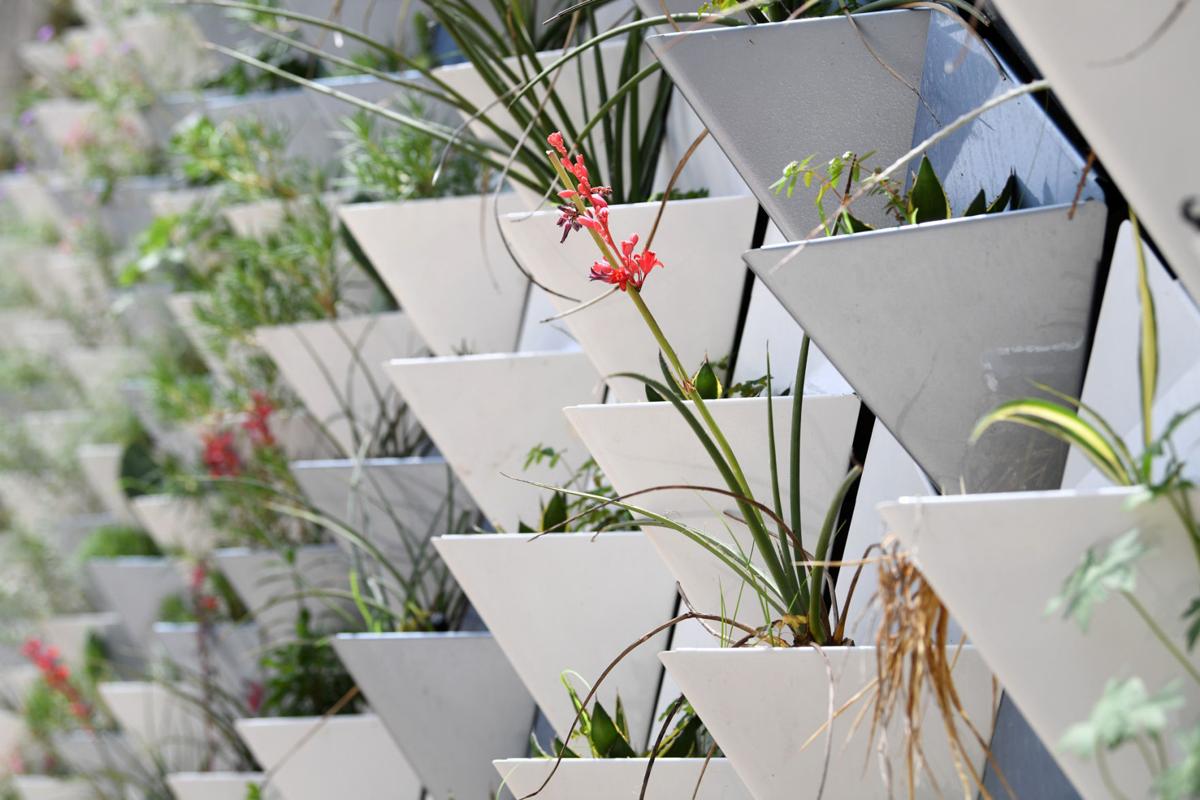 Plants adorn the new Living Wall at the Langford Architecture Center’s building B at Texas A&M. Each planter was made from waste metal from the automotive industry. 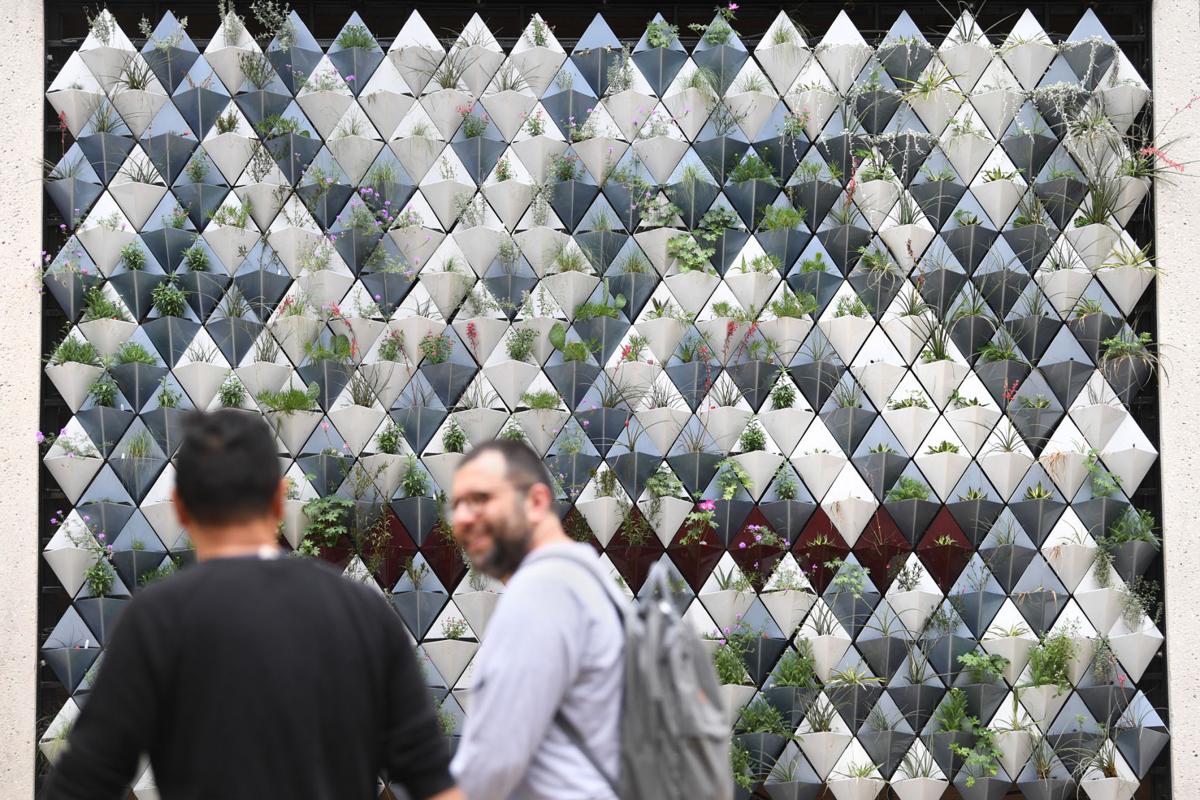 Native Texas plants grow on the Living Wall on the side of the Langford Architecture Center’s building B as pedestrians pass by the area on Wednesday at Texas A&M. Associate professors Ahmed Ali and Bruce Dvorak worked together to create the wall with the help of students.

Texas A&M senior Ashley Tucker walks past the new Living Wall on the side of the Langford Architecture Center’s building B on Wednesday. The wall, which is made of sheet metal byproducts, features native plants.

Plants adorn the new Living Wall at the Langford Architecture Center’s building B at Texas A&M. Each planter was made from waste metal from the automotive industry.

Native Texas plants grow on the Living Wall on the side of the Langford Architecture Center’s building B as pedestrians pass by the area on Wednesday at Texas A&M. Associate professors Ahmed Ali and Bruce Dvorak worked together to create the wall with the help of students.

Over ten feet tall and composed of about 300 metal diamonds, Texas A&M University’s newest living wall is no ordinary garden.

What was once a blank expanse of brick now hosts a variety of Texas-tough plants, attracting small wildlife and catching the eyes of students as they walk past A&M’s Langford Architecture Center. Designed and built by two professors and a team of graduate students, the first-of-its-kind system eventually may be found off campus and around the world.

For Bruce Dvorak, associate professor of landscape architecture, the story of the wall starts on top of the Langford Center, where, in 2013, he started work on a green-roof research project. These specially-designed rooftop gardens can help manage stormwater runoff, conserve energy and reduce air pollution in urban environments. Before joining A&M, Dvorak had worked on several other green roofs, including one on top of Chicago City Hall that helped popularize the concept throughout the Midwest.

As part of Langford’s green roof, Dvorak and his students installed three different living wall systems from vendors, hoping to test their effectiveness in College Station’s climate. Whether it was due to a lack of proper growing space or ineffective irrigation, none of these walls stayed green for long.

“They all died,” Dvorak said. “Every one of them has their own issue.”

With these issues in mind, Dvorak later joined forces with Ahmed Ali, assistant professor of architecture, and a group of graduate students. In the fall of 2017, they started designing a wall of their own.

One key difference this time around was the material. While most current living wall systems use plastic or fabric containers to hold the soil and plants, Ali brought something new to the table. He previously had secured 20 tons of leftover sheet metal from General Motors, giving students the raw material for a host of different projects and helping avoid the high energy cost associated with recycling steel.

“I’ve recently gotten to be very focused on using the consistent waste flow coming from industrial manufacturing and, instead of recycling this, how creatively to reuse this to make new building products,” Ali said.

For the living wall, working with metal presented both pros and cons. While cutting and shaping the metal would be time-consuming, team members had the freedom to get creative with their design. Ultimately, they settled on a series of diamond-shaped modules, each containing its own plant.

Proposed by Panwang Huo — an architecture graduate student at the time — the design allows plants to grow straight up into the sunlight without being forced into the unnatural angles created by other living wall systems.

“The plants are positioned in their natural position,” Dvorak said. “They have a decent amount of soil that they can grow in, and the shape of the module is kind of like the shape of a root system. ... We thought ‘Wow, that’s brilliant. Let’s try it.’”

In the spring of 2018, students went to work creating and installing the first 100 modules, as Dvorak worked to assemble a veritable dream team of drought-tolerant plants. Drawing on his findings from the Langford green roof project, he picked an assortment that could beat the Texas heat and stay green year-round.

“They sustain themselves,” Dvorak said. “These plants are tough as nails. Some of these plants can survive on just rainfall on a green roof.”

This first group showed promise, and when the rest of the wall was planted in the spring of 2019, the team expanded the variety of plants to include around 15 different species, Dvorak said. From the colorful petals of the flame flower to a spineless variety of prickly pear cactus, Dvorak said the wall is a great source of biodiversity on A&M’s campus.

“Some of these plants don’t grow anywhere else in gardens in College Station or on campus,” Dvorak said. “There are just very few places where they’re grown. ... I’m kind of a plant nerd, so I like to see what native plants will work in these environments.”

Hung on a custom-built frame, each plant module is lined with a layer of fabric and periodically watered by its own irrigation nozzle, which can be adjusted to suit the plants’ individual needs. The modules also include holes for easy drainage, and if a plant needs special maintenance or has to be replaced, a module can be removed from the frame with ease.

“Having an easy way to maintain these vertical walls is very important, so the unit itself, it’s almost like designing the body of a car,” Ali said. “In this case, if you have a dent in your door, you don’t have to replace the whole car but only the door.”

Thinking about cars also offered a solution to one of the metal’s major drawbacks: its tendency to heat up. Graduate students spent time in a hot parking lot measuring the temperature of different cars, which led them to choose the cooler white and grey-blue colors that adorn all of the modules. All but 12, that is.

“Sometime at the end of the process, I thought about the 12th Man and Texas A&M and then the maroon,” Ali said. “This is where the 12 maroon units came from.”

In addition to its aesthetic value and contribution to campus biodiversity, Dvorak said the wall provides other benefits similar to those offered by green roofs.

“The human benefits are there, and you also have environmental benefits like bringing a cooler space because the plants evapotranspire, so they can prevent a building façade from heating up,” Dvorak said.

Ali said the wall illustrates one of his core beliefs about sustainability-focused design: functionality and aesthetics must go hand in hand.

“It has to look beautiful,” Ali said. “It has to have a positive public perception, and then when people discover that this was made from waste flow, this saved a lot of energy, this is something working to have a better earth and environment and use less energy, it becomes sort of the hidden jewels of the story.”

For the students involved, the project offered a chance to see a project through from paper to completion, offering hands-on lessons about the potential and limitations of different tools and materials. Landscape architecture graduate student Karishma Joshi said the collaboration between her department and the department of architecture made the experience all the more informative.

“Because it was interdisciplinary, we could actually be a part of the entire process from designing to execution,” Joshi said. “That was a really nice factor in terms of helping me learn. And of course the teamwork was amazing.”

Even before they started at A&M, Joshi and her classmate Niti Tataria were interested in Dvorak’s living wall research, so they relished the opportunity to get involved with his latest project. As these walls gain popularity as innovative urban green spaces, Tataria said she now feels even more prepared to enter the landscape architecture industry.

“Living walls are having a great future,” Tataria said. “You should have the knowledge to design and build these.”

This particular wall may have a great future as well, Ali said, as they are hoping to patent its design and eventually bring the system to consumers.

“We’re closing the loop here between education and practice, between design thinking and real-life materials and products,” Ali said. “I think our students benefit and learn a lot from this thing, not just by finding jobs and positions in firms but also by creating their own sort of path. I’m very proud of that.”