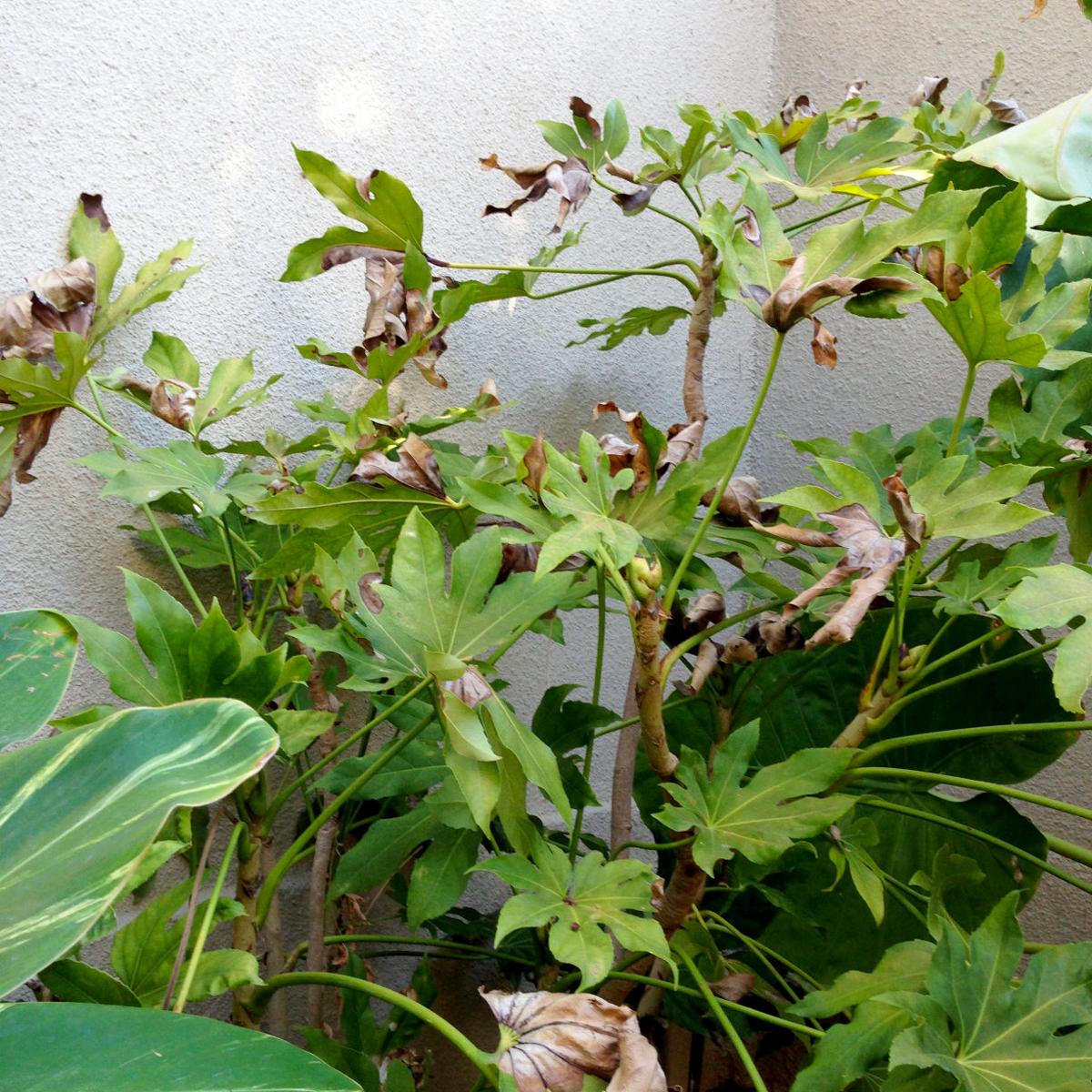 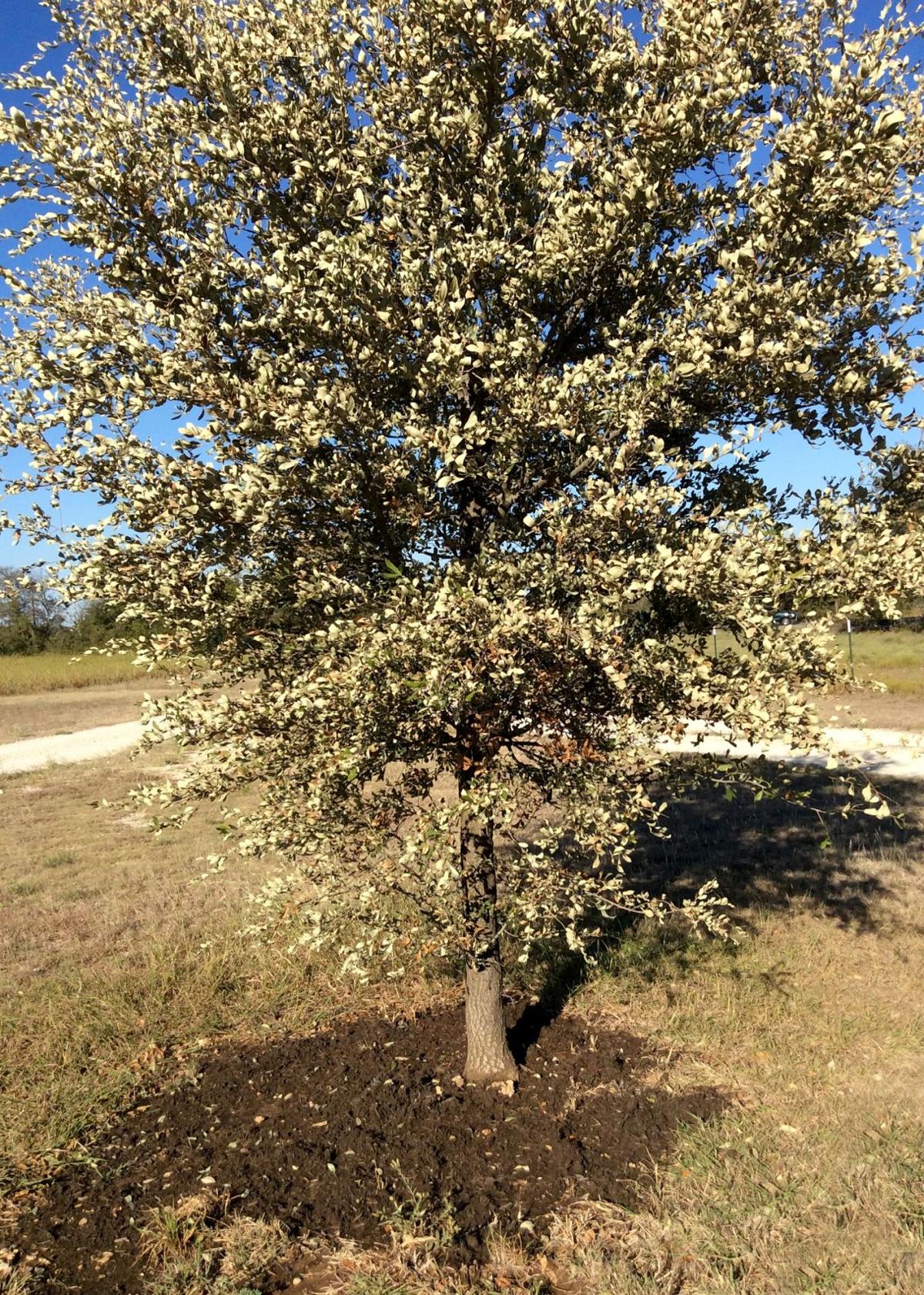 Dear Neil: What could be causing this leaf problem with my fatsia plant?

I've been around fatsias all of my life, and I've never seen an insect or disease bother them. However, I've seen times when cold winter weather killed them, and I've seen lots of times when too much direct sunlight and drought damaged them. The rather pale color of the leaves in your photo makes me wonder about too much sunlight, and the browned edges and tips of the leaves would result from the excessive light in tandem with letting them get too dry. In fairness, they do require good drainage, and if this problem started showing up in June, it could actually be from the opposite: poor drainage during all the rainy weeks in the spring. My vote, however, stays with "too dry."

Dear Neil: What could have happened to two of my live oak trees? They are six years old. About 80 percent of the leaves on the two trees have dried out. Can they be saved?

This tree has either sustained some type of root or lower trunk damage, or it's been allowed to get too dry one or more times this summer. Something has cut off its moisture supply to the top of the tree. I assume the same thing would have happened to the second tree as well.

Dear Neil: What is the best time of year for heavy pruning of overgrown elaeagnus, redtip photinias and nandinas?

Mid- to late winter for all three, although techniques will vary with each. Elaeagnus produces long, arching branches that resemble fishing poles. In addition, the plants will produce more normal growth. Both types should be removed branch-by-branch with lopping shears. Try to sculpt the plants so that they retain their natural growth forms.

Redtips should be pruned in January. They begin their new growth earlier than the other two. Again, use lopping shears or a pruning saw to remove one branch at a time. You can reduce their size by as much as 40 or 50 percent, but try not to do so more than once or twice -- the plants will lose vigor.

Nandinas are the odd ones. You want to remove the tallest canes almost completely to the ground each February, before new growth begins. Most years that would mean removing the tallest one-third to one-half of the canes. They will send up new shoots to keep the plants full to their bases.

Dear Neil: Over the past year, the ground around my oak tree has risen up around 8 inches. What can I do to clear it away so the soil will go back to ground level?

Most of a tree's major roots are in the top foot of soil. That's certainly true with oaks, specifically live oaks [if that's what you have]. Their roots will push up and out of the soil, almost as if to reflect the trees' lower branches. That's a normal occurrence, and you should not try to change it. You could plant shade-tolerant shrubs and tall groundcover to conceal the roots, but they're really a part of the majesty and beauty of live oaks. And, to a lesser degree, the same information would apply to other oaks and other trees in general.

Dear Neil: What type of shrub can be planted in front of my house where it will receive full, hot sun in summer? I need something that will stay 2 feet tall. Plants that I've tried did not survive the sun.

It might not have been due completely to the sun. If your new plants dried out at all, that could have caused their death. It would help to know what you planted. If I were facing that same set of circumstances, I'd consider dwarf yaupon holly, [possibly Carissa holly if the house isn't a hot, reflective surface], dwarf Burford holly, Harbour Dwarf or compact nandinas and [if the planting bed were several feet front-to-back] Tam junipers. That's a ticklish kind of space to landscape. It might be better to use smaller groupings of single types of shrubs, but using three or four types over the span of the area. For variation, maybe include attractive river rock for a portion, decorative pots filled with sun-tolerant color for others. You probably need to talk to a local independent retail garden center manager for help. Take photos of the area in with you.

Dear Neil: I have grass burs all over my yard -- worse than ever. I have used pre-emergent weedkillers in the past, but without much success. I did not use them this year. What can I do?

You almost prove the worth of the pre-emergent weedkiller granules in your comments. You said that the one year you didn't use them was the worst year for them in your yard. Be diligent to apply them next year, once about two weeks before the average date of the last killing freeze for your area, and then again 90 days later.

Have a question you'd like Neil to consider? Mail it to him in care of this newspaper or e-mail him at mailbag@sperrygardens.com. Neil regrets that he cannot reply to questions individually.