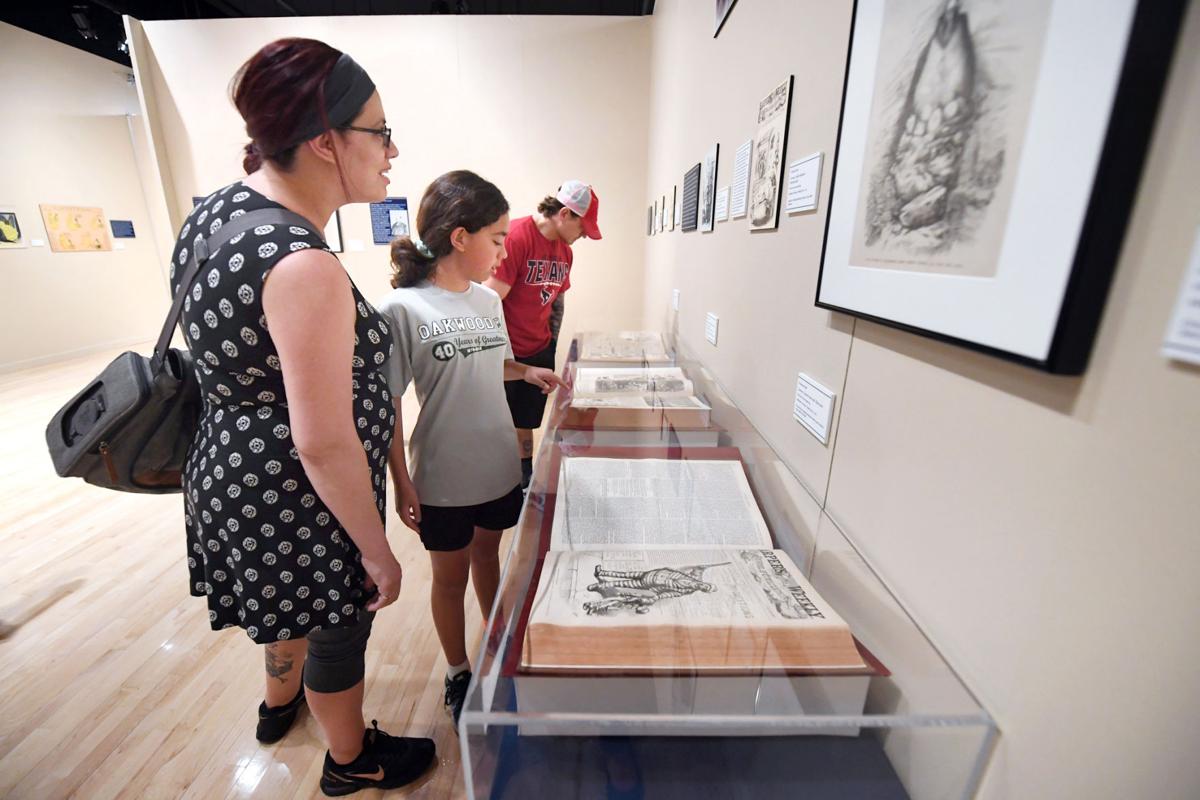 Deborah Hill, left, her daughter, Angelikah, 11, and husband, Michael, look at cartoons by Thomas Nast while visiting "Wit and Humor: American Political Cartoons," an exhibit at the George H.W. Bush Presidential Library and Museum, in July 2019. 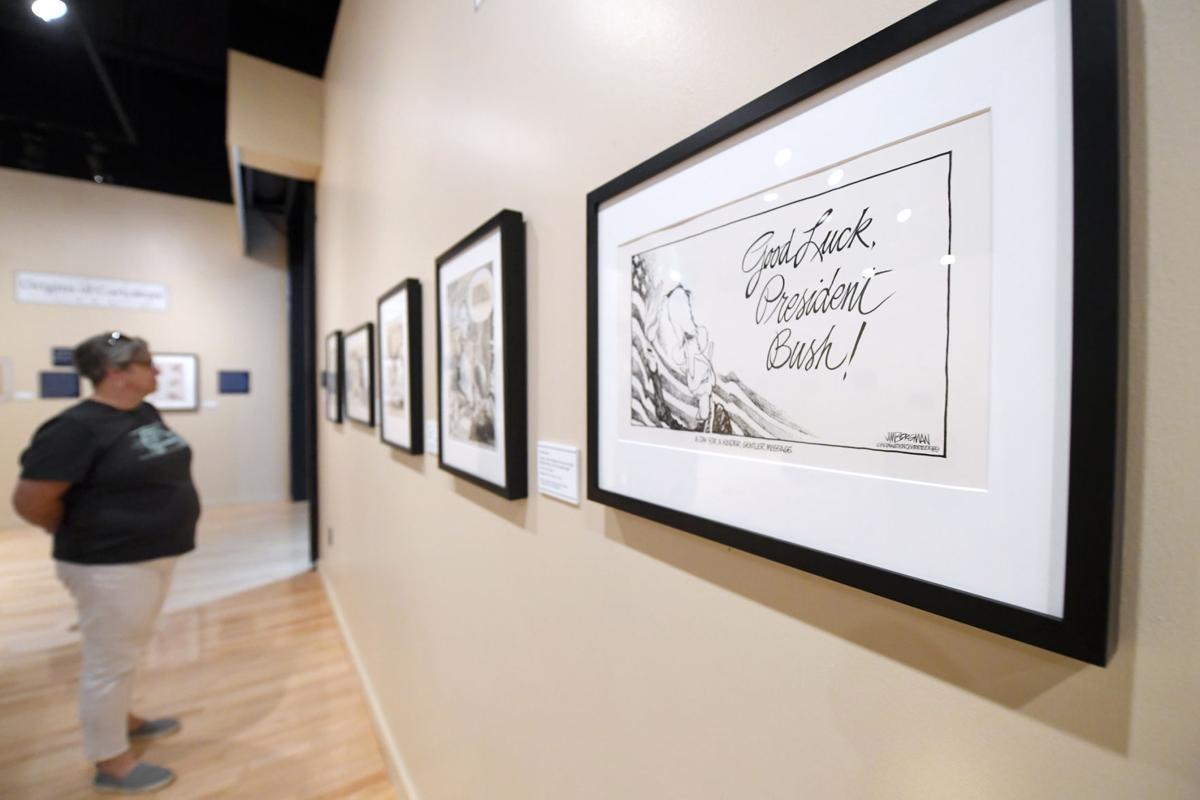 A political cartoon by Jim Borgman that was published in the Cincinnati Enquirer in November of 1989 is among the works in "Wit and Humor: American Political Cartoons," a new exhibit at the George H.W. Bush Presidential Library and Museum.

Deborah Hill, left, her daughter, Angelikah, 11, and husband, Michael, look at cartoons by Thomas Nast while visiting "Wit and Humor: American Political Cartoons," an exhibit at the George H.W. Bush Presidential Library and Museum, in July 2019.

A political cartoon by Jim Borgman that was published in the Cincinnati Enquirer in November of 1989 is among the works in "Wit and Humor: American Political Cartoons," a new exhibit at the George H.W. Bush Presidential Library and Museum.

Full of iconic caricatures and satirical observations of American politics, a new exhibit at the George Bush Presidential Library and Museum traces the history and cultural significance of political cartoons in the U.S.

“Wit and Humor: American Political Cartoons” features artwork and artifacts from a variety of sources, including the Library of Congress, Texas A&M’s Cushing Library and the Bush Library’s own collections. With sections on prominent cartoonists throughout history, the exhibit offers entertaining takes on events that shaped the nation, while showing the evolution of political cartoons as a distinct art form.

The exhibit’s curator, Bush Library registrar Jay Patton, said the symbols and imagery of cartoons can convey “a powerful commentary about who we are,” and he hopes visitors are inspired to dig deeper into the history behind each display.

“As a historian, I always like and appreciate the different lens when it comes to viewing our history,” Patton said. “It shows what people were feeling at a particular moment as it relates to a certain event.”

One early cartoonist whose legacy has endured is 19th-century artist Thomas Nast. Patton said Nast’s work established or popularized symbols that remain recognizable today, such as the elephant and donkey representing the Republican and Democratic parties, respectively.

Looking through Nast’s work, Patton said one thing that becomes clear is that the artist’s perspective was frequently informed by the racial and ethnic prejudice harbored by many at that time.

“Nast was very racist, particularly racist when it came to Irish immigrants,” Patton said. “There was a huge influx of Irish immigrants to the United States during the time he would have been cartooning. He was fiercely anti-Catholic as well.”

But in later decades, some well-known cartoonists served as staunch opponents of racism and advocates for equal rights, Patton said. Bill Mauldin — best known for his portrayal of life in the military through his long-recurring characters Willie and Joe — was a frequent critic of segregation and Jim Crow laws. A Mauldin cartoon titled “Independence Day 1964” is featured in the exhibit and commemorates the signing of the Civil Rights Act.

“This is one that I think is really important,” Patton said. “It shows an African American family celebrating having civil rights signed into law.”

Another frequent target of Herblock’s comics was Sen. Joseph McCarthy and the paranoia that permeated the nation during the second red scare of the late 1940s and 1950s. It was Herblock who coined the term “McCarthyism” to describe the phenomenon.

“He created many cartoons throughout this period that were calling attention to how much it was kind of a farce; I think that’s how he saw it,” Patton said.

In many cases, political cartoonists have played an influential role in American political life, even catching the attention of the powerful figures they lampooned, Patton said. After the scandals and ultimate end of the Richard Nixon administration — events satirized relentlessly by cartoonists — The Washington Post published a page full of Herblock’s Nixon drawings, accompanied by a quote from the president.

“Years ago when I was a young congressman, things got under my skin,” Nixon’s quote reads. “Herblock the cartoonist got to me. … But now when I walk into this office I am cool and calm.”

Patton said another president who took notice of his portrayal in political cartoons was the Bush Library’s namesake. When it comes to depictions of the 41st president, the collection showcases a wide variety, following Bush through different periods of his life and highlighting the many different ways he was portrayed by cartoonists.

“President Bush made a comment about feeling like glasses made him look like a wimp,” Patton said. “Patrick Oliphant, being bespectacled, took exception to that. So he always draws him with glasses, and he would often have him with a purse.”

While Bush wasn’t always happy about the way he was represented in cartoons, Patton said the former president wasn’t afraid to laugh at himself. Bush even continued a tradition from the Ronald Reagan administration in which the press office would collect all the political cartoons from the week, compile them into a document and circulate it throughout the White House.

“Every week for the entire administration, all four years, there is an edition of the Friday Follies,” Patton said. “The president saw these, his staffers saw these, and they could have a laugh or look at what the pulse of the country was like based on cartoons.”

“Wit and Humor: American Political Cartoons” is on display in the Bush Library’s Ansary Gallery of American History through Jan. 5.