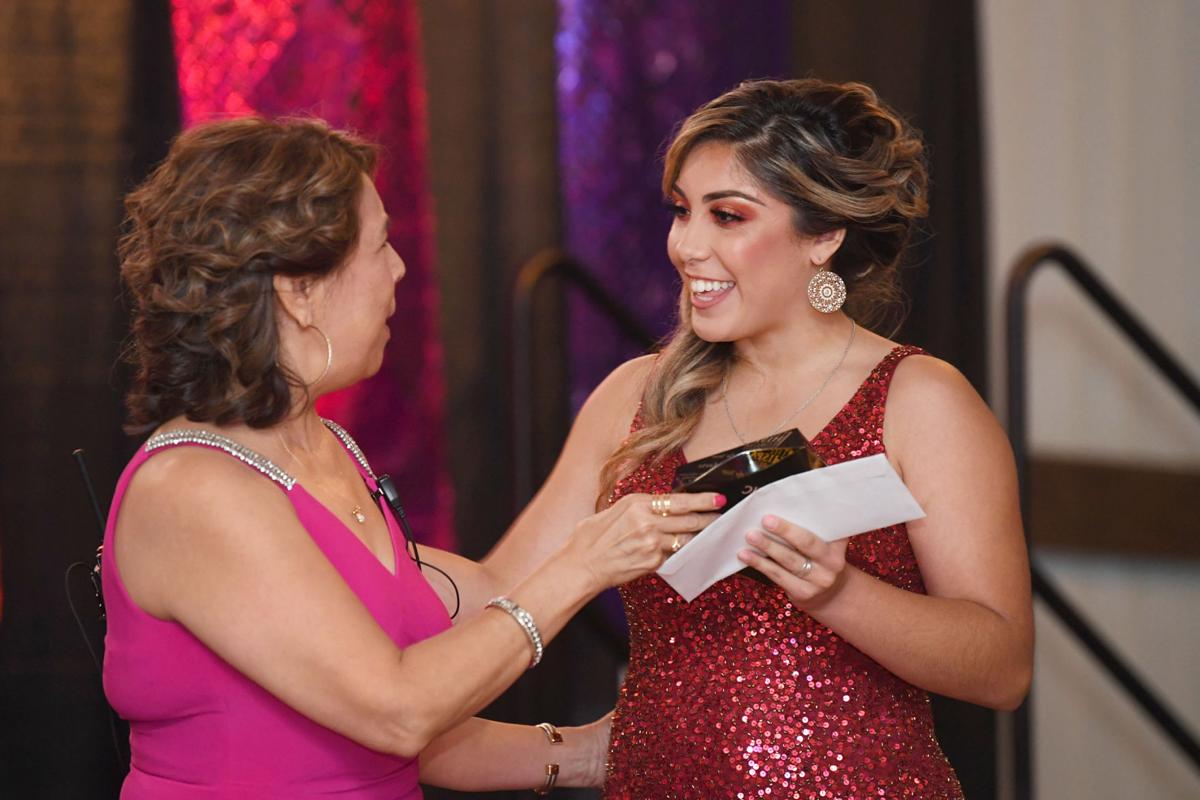 Dora Davila, presents Analisa Rodarte with the Student of the Year award during The Hispanic Forum of Bryan/College Station's 21st Annual Scholarship Gala at the Brazos Center on Saturday night. 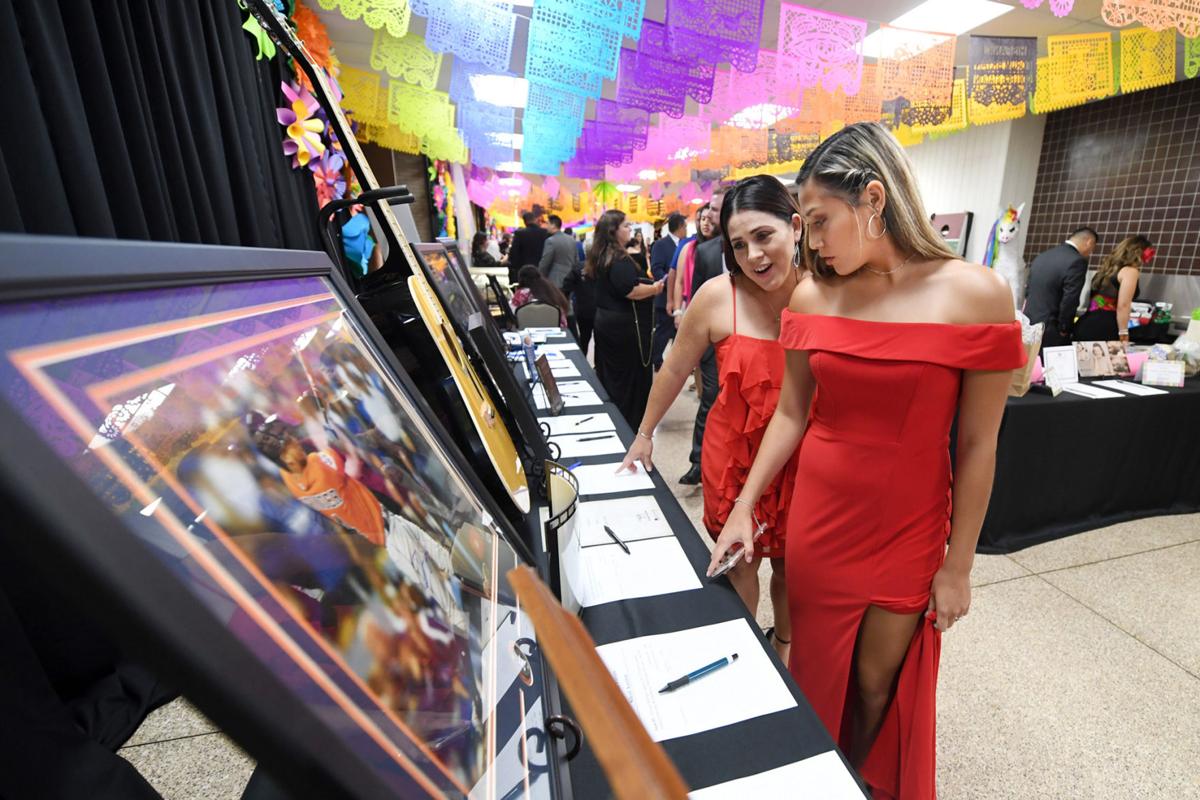 Reyanna Cerda, right, and her mother, Sonia Cerda, look at some of the silent auction items while attending The Hispanic Forum of Bryan/College Station's 21st Annual Scholarship Gala at the Brazos Center on Saturday night.

Dora Davila, presents Analisa Rodarte with the Student of the Year award during The Hispanic Forum of Bryan/College Station's 21st Annual Scholarship Gala at the Brazos Center on Saturday night.

Reyanna Cerda, right, and her mother, Sonia Cerda, look at some of the silent auction items while attending The Hispanic Forum of Bryan/College Station's 21st Annual Scholarship Gala at the Brazos Center on Saturday night.

Hundreds of supporters enjoyed a colorful Dia de Los Muertos-themed dance and dinner at the Brazos Center on Saturday night as the 21st Annual Scholarship Gala of the Hispanic Forum of Bryan-College Station honored community members for their outstanding achievements and awarded thousands of dollars in scholarships to 80 high school graduates.

This year the Hispanic Forum awarded $130,000 in scholarships, which surpassed the $1 million mark in total money given since 1998. These funds are garnered from sponsorships, donations and an annual charity golf tournament and 5k marathon.

Forum President Dora Davila said the $130,000 is “definitely the most money we’ve ever raised.”

The students who received their scholarships tonight represented most of Brazos County’s high schools. Many will go on to attend Texas A&M this fall, and the university gifted 10 of those soon-to-be Aggies individual scholarships of $1,000 each. Sam Houston State University representatives made a last-minute surprise announcement at the gala that they, too, would be awarding $1,000 scholarships to the six students who had elected to attend the school in the fall.

“Our goal at the Hispanic Forum is to provide as many scholarships as we possibly can,” said Janelle Ramirez, chair of the forum’s scholarship committee. “Obviously, we look for strong students. Plenty are gifted academically, but we don’t just go by a student’s GPA or test scores. We also look at them wholly, for what they have done for their community and in leadership roles... did they have barriers [they] had to overcome?”

Analisa Rodarte, a graduate of Bryan High School, was selected from the group of 80 to receive the Hispanic Forum’s annual designation of “Student of the Year,” walking away with a $10,000 scholarship. Rodarte plans to attend Texas A&M and study biology, with dreams of attending medical school and becoming a doctor. She is described in her Hispanic Forum bio as having been heavily involved in extracurricular activities, including softball, student council and youth group at St. Anthony’s Catholic Church. She was president of the National Honor Society at Bryan High, graduated with a GPA of 4.34, led school pep rallies, worked a part-time job and cared for her younger sister, among many other accomplishments. She was recognized by The Eagle as Academic All Brazos Valley.

Several members of the community were also recognized by the Hispanic Forum this year, each presented with an award on stage.

The 2019 Person of the Year award went to Manuel Longoria, project manager of REC industries. Longoria was recognized for his athletic achievements in boxing and his mentorship to local at-risk youth. His gym, Longoria Boxing Gym, has supported local youths wanting to participate in the sport, and the facility has produced six national titles. Many of his athletes are considered at-risk youths, but through training and athletic endeavors go on to achieve great things, according to his forum bio. Longoria briefly coached Texas A&M’s boxing team in 2017, and he established an Aggie boxing camp that brings athletes from across Texas to the university campus to take part in different programs. He also hosts free summer boxing programs for children.

“I feel very honored to be given the award by the forum,” he said. “This inspires me to keep doing what doing I’m doing for the youth in my community. It’s something that took a long time, and wasn’t done alone. I have to thank my volunteers, my team, and the parents who participated.”

The 2019 Business Owner[s] of the Year award was given to Bobby and Maria Duron, owners of a chain of hair salons, including Family Hair Styles and The Right Cut. Bobby Duron has also taken ownership of BJ’s Tire Shop. The couple’s business endeavors have grown since the early 1990s.

“We would like to give thanks and glory to God for giving us the knowledge and tools to run our businesses successfully,” Maria Duron told the crowd as the couple accepted their award. “And we want to thank our family and friends who have given us support all these years.”

The 2019 Educator of the Year honor was given upon Kathleen Manchaca, a Caldwell native who teaches English Second Language [ESL] at Anson Jones Elementary School in Bryan. She received the Texas Teacher’s Certificate Program’s Teacher of the Year Award earlier this year. In her forum bio, she is described as having a talent for establishing effective connections with her students. She’s spent time tutoring migrant children after school and on Saturdays, and has volunteered with Jones Elementary’s Read by 3rd program.

“Thank you to the Hispanic Forum for making me educator of the year,” Manchaca said as she accepted her award on stage. “It’s been a wonderful year of teaching. Thank you to Ms. [principal Linda] Montoya for the opportunity to teach at Jones Elementary.”

The Lifetime Achievement Award of 2019 was given to Irene Buentello, who has spent 40 years in civic and political careers. She has been employed by Texas A&M and the Texas Forest Service, and worked for the U.S. Department of State. She’s held various positions in Washington, D.C., serving as Hispanic liaison for a congressman and on assignment for the Department of State’s Foreign Service. She has worked alongside presidents and dignitaries in multiple roles, and traveled the world representing the United States.

“I am honored to be recognized for this award,” Buentello said. “You don’t achieve anything without friends, family and colleagues.”

The Presidential Excellence Award for 2019 was presented to KBTX-TV’s Karla Castillo, who emceed the gala with Rusty Surette. She was selected because of awards received in the field of broadcast journalism, such as the National Academy of Television Arts & Sciences News Anchor Award in 2017. Castillo told Davila that she feels humbled to be recognized in such a way.

“It was quite the surprise, and thank you, Dora, for thinking about me!” she said. “Y’all do so many incredible things, and when I think of the little things I do, they [don’t seem] like a whole lot.”

Photos from The Hispanic Forum of Bryan/College Station's 21st Annual Scholarship Gala at the Brazos Center on Saturday, July 13, 2019.

A 5K run set for Saturday will help raise money for college scholarships.

For a number of students at Rudder High School on Tuesday, crowding into a small room during…