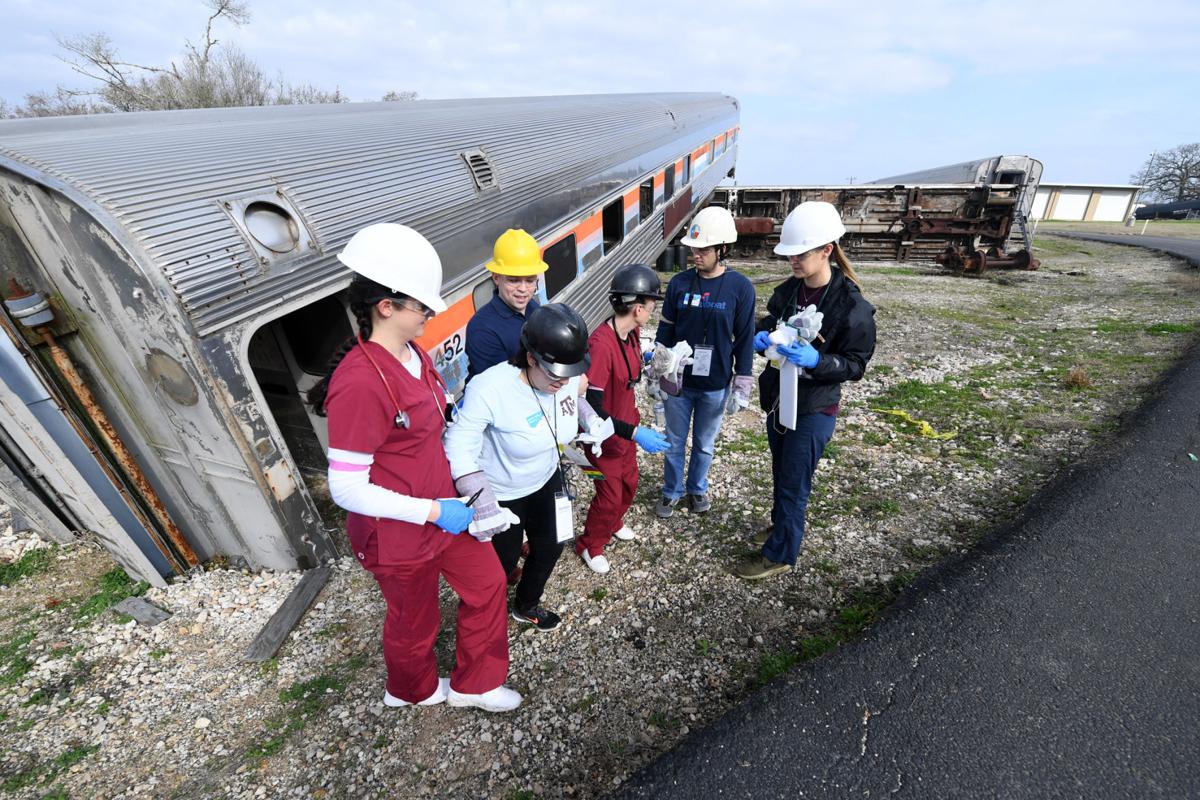 Students from Texas A&M's colleges of nursing, medicine, pharmacy, public health and veterinary medicine participate in a emergency response simulation of a train derailment during the 10th annual Disaster Day on Friday at Disaster City. 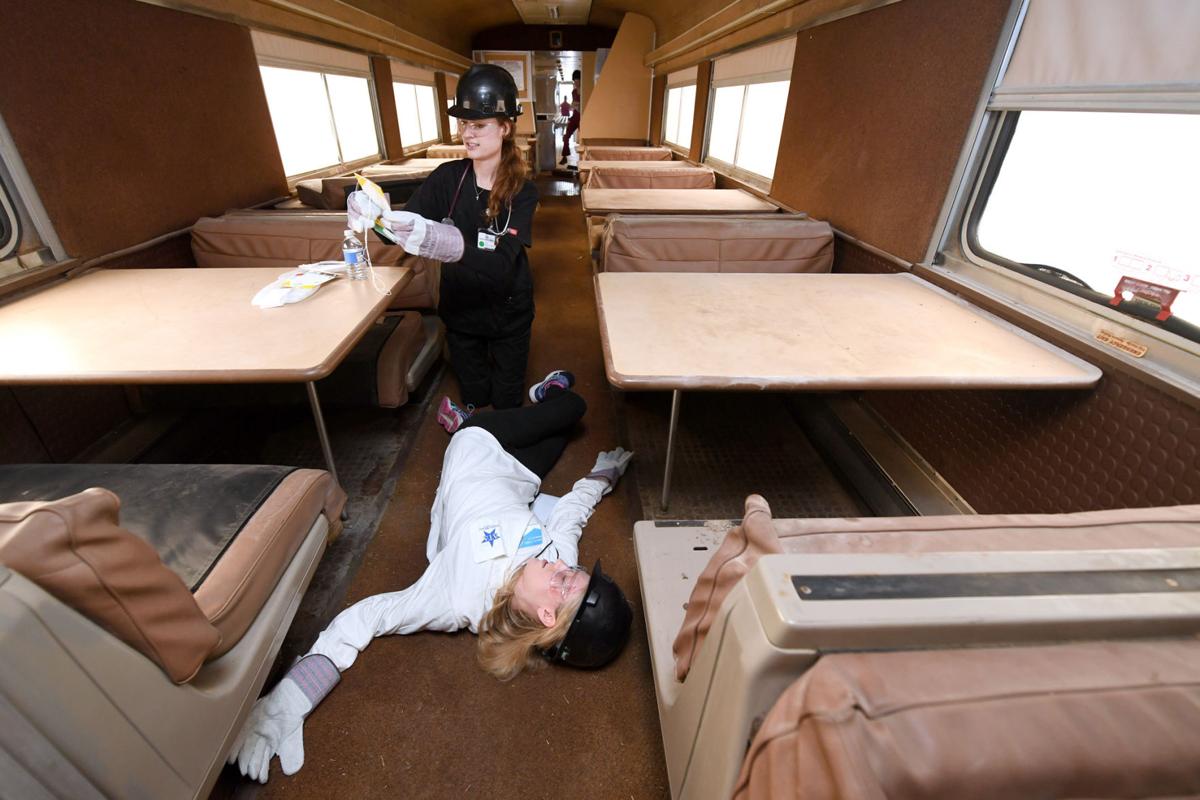 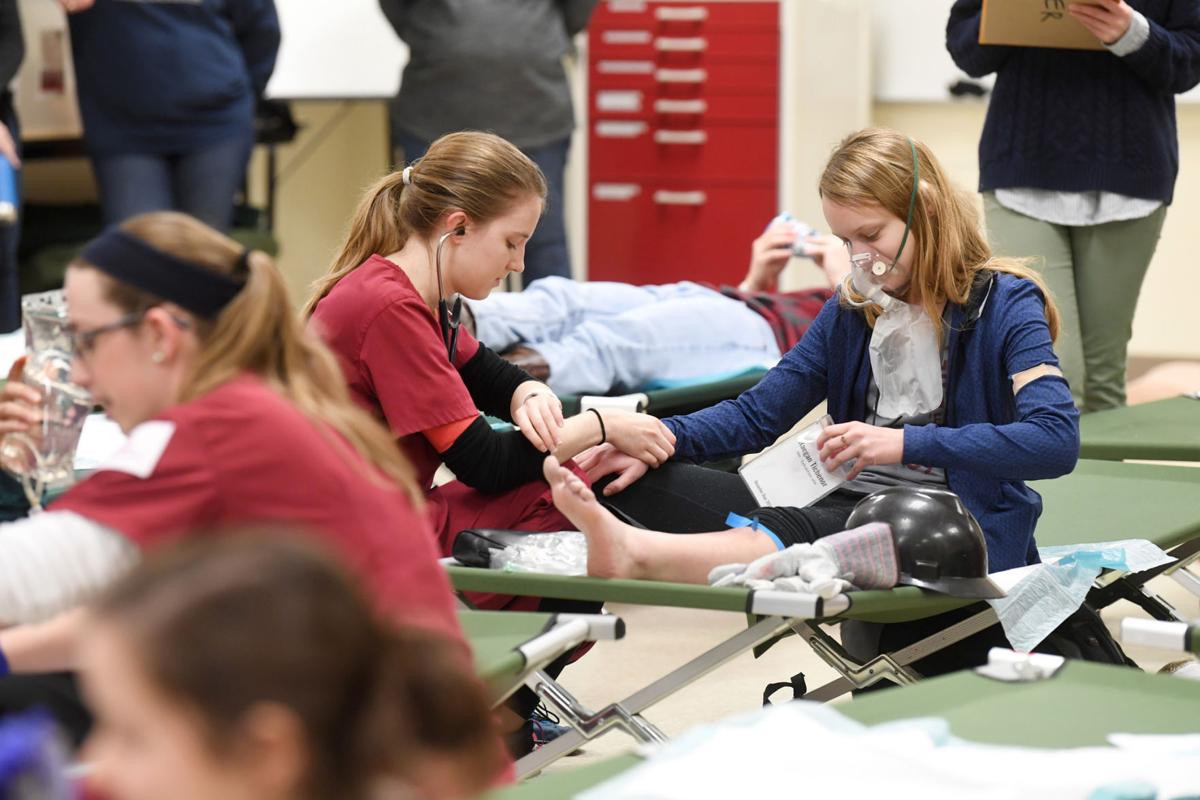 Students from Texas A&M's colleges of nursing, medicine, pharmacy, public health and veterinary medicine participate in a emergency response simulation of a train derailment during the 10th annual Disaster Day on Friday at Disaster City.

Friday morning, William "Rhett" Butler was role-playing as a man with a secret, or more specifically, pretending he had a urinary tract infection that could lead to septic shock.

"If it's not treated appropriately here, it could kill me," said Butler, a first-year medical student at Texas A&M's College of Medicine.

Butler was one of about 650 students from the Texas A&M College of Medicine, College of Nursing, Rangel College of Pharmacy, School of Public Health and the College of Veterinary Medicine & Biomedical Sciences who participated in the 10th annual Disaster Day, the country's largest student-led interprofessional emergency response simulation.

This year was the first time the simulation was held at Texas A&M Engineering Extension Service's Brayton Fire Training Field and Disaster City, a mock city spread out over 52 acres that serves as a training ground for first responders from across the country.

"We need everybody to work together as a team to get these patients taken care of," Jared Laney, deputy incident commander and the day's public information officer, said after officials announced the previously secret scenario: a train derailment that had left scores injured and dead.

"These disasters happen all the time," Laney said, and they do: between Jan. 28 and Feb. 4 -- one week -- there were three freight and passenger train crashes and collisions across the country.

The scenario for the last Disaster Day -- held in late March 2017 -- was that a Category 5 Hurricane had hit Houston. Hurricane Harvey wrought historical damage on Texans and their state's coasts about six months later.

"We're going to be called upon to act in these types of situations," said Laney.

Laney said it was important for the students -- future nurses, pharmacists, doctors, veterinarians and public health professionals -- to work together to coordinate care during an emergency situation, and that he had done as much when he was employed at an emergency shelter.

"It's a very real scenario to have all these people working together," he said.

Kaunas said there were also "injects" planted in the field, which she said "provide greater challenges for the students."

The injects are unforeseen complications that can arise during an emergency -- dead bodies with no morgue onsite, someone who has to be quarantined because they have tuberculosis. The students, including the event planners, did not know about the specific injects before they were identified in the field, Kaunas said.

Jay Maddock, dean of the Texas A&M School of Public Health, praised Disaster Day for giving students as close to real-life experience as they can get without actually helping patients during an emergency.

"You can read about it in a book, but it's not the same," said Maddock.

Emergencies being impossible to predict, Maddock said it's unclear when students will be able to use their Disaster Day training, but they'll be a little more prepared for when that day comes.

"It might be 10 years before a student gets involved, but at least they've been trained," said Maddock.

Back in the makeshift field hospital, Butler continued playing his character, a 44-year-old man on antibiotics that aren't working, making him one of the "injects" Kaunas had mentioned. His blood pressure low and fatigue high, he told the nurses, pharmacist and doctor about his urinary tract infection and the medication he had been taking for a week.

"They put me on the stuff, I think it's making me tired," said Butler.

The interprofessional medical team determined his vitals were normal and ruled out a traumatic brain injury, eventually catching the sepsis. The doctor told Butler he would get him antibiotics soon, and the team went on their way, off to save the hundreds of other imaginary patients affected by the train derailment.

After the medical team left, Butler said it took them 30 minutes to catch his condition, "right when the designers of the script hoped they would get there."

"I'm responding in the right direction," Butler said of his character's condition.