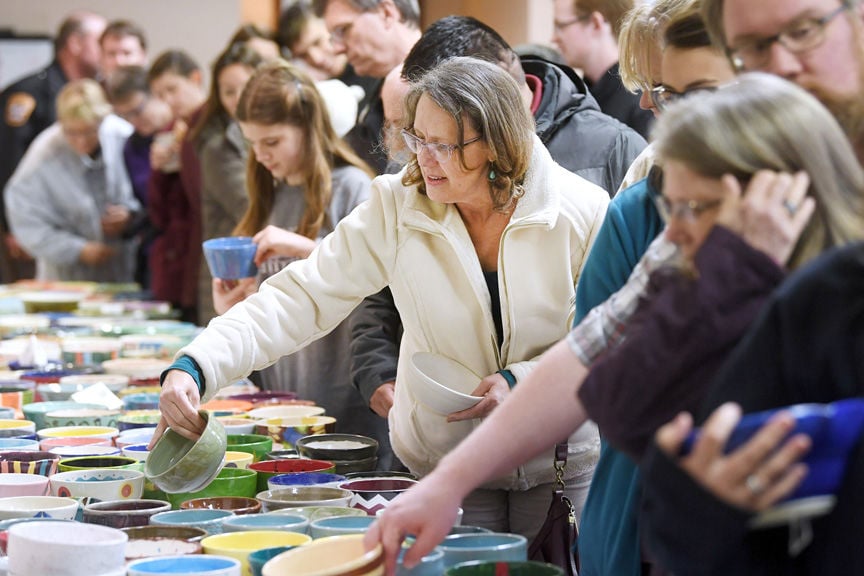 Suzanne Bastian and others choose from the selection of handmade bowls while attending the 13th annual Brazos Valley Empty Bowls, a fundraiser for the Brazos Valley Food Bank, at St. Andrew's Episcopal Church on Thursday evening. For a $20 minimum donation, attendees received a bowl of their choice and a meal of soup and bread. 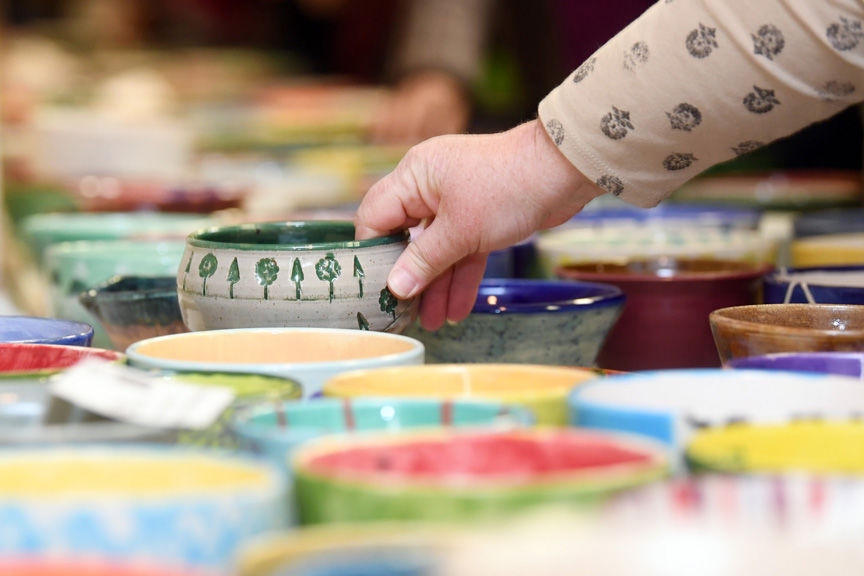 Connie Flickinger reaches for one of the handmade bowls during the 13th annual Brazos Valley Empty Bowls fundraiser for the Brazos Valley Food Bank on Thursday at St. Andrew's Episcopal Church. For a $20 minimum donation, attendees received a bowl of their choice and a meal of soup and bread.

Suzanne Bastian and others choose from the selection of handmade bowls while attending the 13th annual Brazos Valley Empty Bowls, a fundraiser for the Brazos Valley Food Bank, at St. Andrew's Episcopal Church on Thursday evening. For a $20 minimum donation, attendees received a bowl of their choice and a meal of soup and bread.

Connie Flickinger reaches for one of the handmade bowls during the 13th annual Brazos Valley Empty Bowls fundraiser for the Brazos Valley Food Bank on Thursday at St. Andrew's Episcopal Church. For a $20 minimum donation, attendees received a bowl of their choice and a meal of soup and bread.

A line stretched out the door of St. Andrew's Episcopal Church in Bryan on Thursday as people selected a handmade bowl as part of the Brazos Valley Food Bank's Empty Bowls event.

"The big message, the point of doing this is to remind people that there are other people in the community going hungry, so we're trying to do a little bit of our part to make sure they have some access to the food that they need," co-coordinator Greta Watkins said.

For the past 13 years, Empty Bowls has helped support the food bank at $20 per bowl -- and a bowl of soup and bread -- and by educating people of the need and the services the Brazos Valley Food Bank provides.

"The whole concept of an empty bowl is very symbolic, and it can be very meaningful," Brazos Valley Food Bank Executive Director Theresa Mangapora said. "It's a reminder that there's people that are hungry in the Brazos Valley, and you buying this bowl is helping alleviate that hunger. It's that easy to do that."

The $20 donation for a ceramic bowl can go on to pay for one of the following through the food bank: 200 pounds of produce, 21 school food pantry meals, three food-filled backpacks for children for the weekend, three senior bags filled with food for homebound seniors, more than two mobile food pantry boxes, 120 pounds of food, or 98 meals.

Empty Bowls usually brings in between $5,000 and $8,000 for the food bank, but the final tallies will take a few weeks with the addition of a silent auction this year.

"It just makes me feel good to be able to help support the community and help support a good cause, so it's twofold," she said. She picks at least one bowl at each event, either to add to her collection or to give as a gift.

Though she is now in Bryan-College Station, Siatunuu said, she still relies on what she learned in Hawaii about selecting a bowl: "We say the bowl will speak to you. … If you feel like you can hold it, and it feels like a good fit in your hand, it's the bowl for you."

This year's Empty Bowls represented a first with it being at St. Andrew's, which donated the space. The timing of the event also meant it could become part of the Third Thursday Art Step events in Downtown Bryan.

Though she was not planning on taking home a bowl from this year's event, Mangapora said, with the collection she has amassed over the past 13 years, she no longer eats cereal or ice cream out of anything but bowls from Empty Bowls events.

"They're hearty and they're beautiful and none of them match, and it's awesome," she said.

After 12 years of being organized by Watkins and Penny Woodcock, this year's event was developed by Texas A&M event planning students.

Last semester, Lauren Widmann and her six-person committee developed a proposal for the 13th annual Empty Bowls, and co-coordinators Woodcock and Watkins chose to bring them on as planners.

In total, Widmann and her team collected more than 300 handmade, hand-painted bowls created by three pottery studios, individual artists and by visitors to U Paint-It.

Worried no one would show up, Widmann said, she was awestruck to see a line out the door.

When Widmann and her team received Empty Bowls to create a proposal, she said, they did not know much about the event or what it represented, but realized just how much potential there was after learning more about it.

"We're raising awareness for hunger in our community. Going into this, I didn't know how many people were in need in the Brazos Valley. It's just kind of eye-opening. I didn't realize $20 can buy all of this."

As people learn about the event and continue attending, Widmann said, she hopes they realize there is a need in the community for the services the food bank can provide and Empty Bowls is one easy way people can support the cause.

"Donating a small amount to the food bank gives a lot back to the community," she said.

Though the statistics can sound overwhelming, Mangapora said, she wants people to know they are helping the issue of hunger in the community.

"They're helping make the Brazos Valley hunger-free. One dollar, as you know, can go a long way, one volunteer hour and one can of food, it really all does matter," she said. "It's hard to hear the numbers and feel like you can make an impact, but I'm here to tell you that you can, and you can do it having fun and being generous and giving gifts."