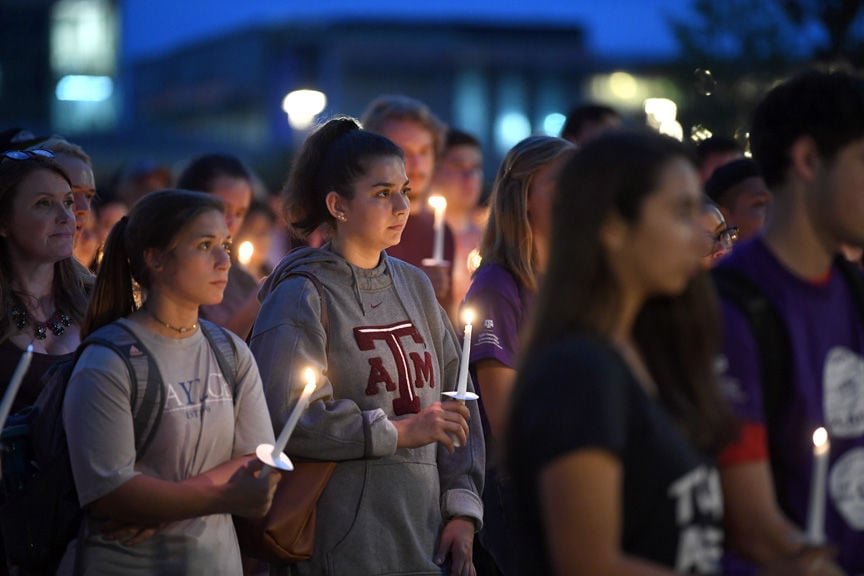 Alexis Foss, left, and Alex Detchessahar listen as survivors share their stories Tuesday evening during the third annual “Not Another Aggie” suicide awareness event at Rudder Plaza.   Hundreds gathered on campus to observe World Suicide Prevention Day, which was Tuesday. 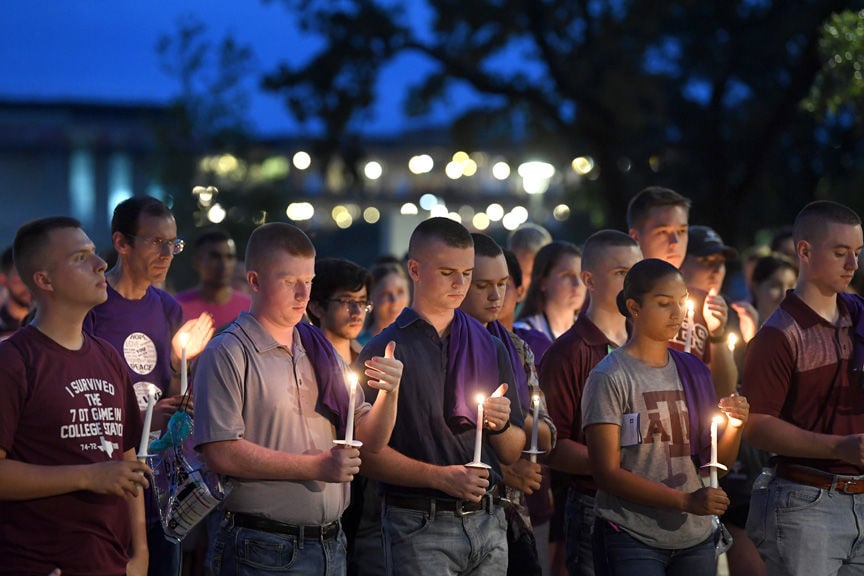 Attendees of the third annual “Not Another Aggie” suicide awareness event stand with candles at Rudder Plaza on Tuesday as they raise awareness of suicide prevention and offer support to survivors and those struggling with depression.

Alexis Foss, left, and Alex Detchessahar listen as survivors share their stories Tuesday evening during the third annual “Not Another Aggie” suicide awareness event at Rudder Plaza.   Hundreds gathered on campus to observe World Suicide Prevention Day, which was Tuesday.

Attendees of the third annual “Not Another Aggie” suicide awareness event stand with candles at Rudder Plaza on Tuesday as they raise awareness of suicide prevention and offer support to survivors and those struggling with depression.

Texas A&M senior Natalia Suarez of Temple stood before a sea of small flames at Rudder Plaza on Tuesday and told the crowd of how her parents stood by her with open arms after she spoke to them about crippling depression and fear she felt early in her college career.

“If there’s anything you should take from me standing up here today, it should be that you should fight,” Suarez stated. “You should fight for your life, because it can get better, and it will get better. There’s always a light at the end of the tunnel. Don’t be afraid to seek help, and don’t be afraid to lean on your family and friends, because they love you and will always be there for you. With that I say, not another Aggie, and not another survivor.”

Suarez was one of hundreds who gathered on campus as part of “Not Another Aggie,” an event sponsored by Texas A&M Counseling & Psychological Services — or CAPS — to observe World Suicide Prevention Day, which was Tuesday. This was the third year for the event, which featured a suicide walk that allowed visitors to walk with a candle to represent a life lost to suicide. Attendees could collect T-shirts and other tokens of recognition relative to the movement, write encouraging messages on a small travelling community wall and talk with representatives of organizations that provide resources for people either suffering suicidal thoughts or wanting to be knowledgeable on how to help a suicidal person.

“This event is also for anyone to be able to see that there are people who care,” said Santana Simple, assistant director with CAPS. “... The whole point of it is to help someone know they are not alone. Hopefully they might see the people here and know people do care and that people are taking time to learn more.”

Simple shared a statistic, noting that three college students on average die every day in the United States from suicide. Suicide, she said, is the second most common cause of death for American college students after accidents. She stressed that one of the biggest myths is the belief that only a counselor or mental health expert can do anything to help.

“Really, everyday people play the most crucial role in saving lives,” she said. “So when you see someone struggling, say something and let them know you care and are concerned.”

Students lined up in long queues to speak to staff and volunteers with booths representing organizations such as the Brazos Valley Coalition on Suicide Prevention, Texas A&M’s GLBT Resource Center and the National Alliance on Mental Illness. One of these organizations, Texas A&M’s Suicide Awareness and Prevention Office, has only been on campus for a few months now, having just been founded under CAPS via grant funding this semester.

“We primarily focus on suicide awareness and prevention,” said CAPS counselor Tammy Smith. “We reach out to multiple stakeholders on campus, specifically [teaching] how to recognize emotional distress and what to do in that case. etc.”

Smith noted that the Suicide Awareness and Prevention Office trains interested participants in the flagship program known as “QPR,” or “Question, Persuade, Refer” gatekeeper training. The training can be provided to student organizations, faculty members, colleges within the university and any interested group that would like to be educated on how to become a “gatekeeper” against suicide. She added that the Suicide Awareness and Prevention Office now has a digital simulation program where students and faculty can practice speaking productively with a suicidal individual through a simulation. This program is available to all students and all faculty, she said.

Smith echoed the words of Simple, stressing her belief that a person does not have to be a psychologist to help someone struggling with self harm.

“Everybody has some sort of empathy, and [it’s about] listening and having empathy,” she said. “It’s not your job to fix anyone. Just be there and support them.”

To learn more about CAPS and SAPO, visit caps.tamu.edu.