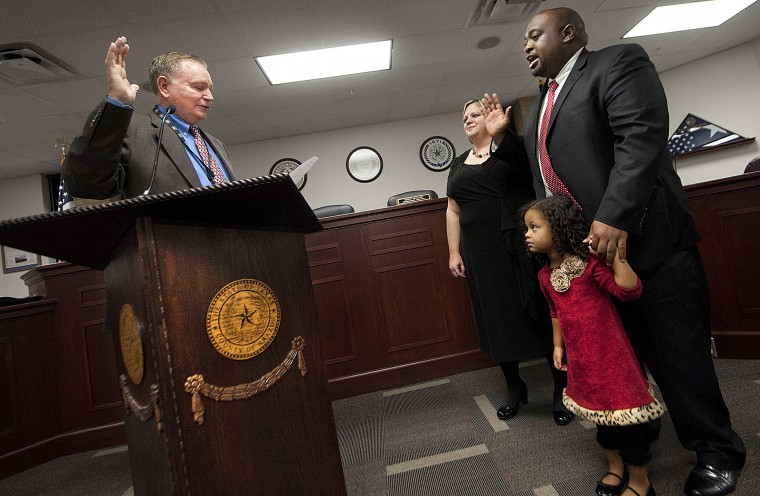 Jarvis Parsons stands with his daughter Erin and wife Aimee while being sworn in as Brazos County District Attorney by Judge Duane Peters (left) at the Brazos County Administration Building on Tuesday. 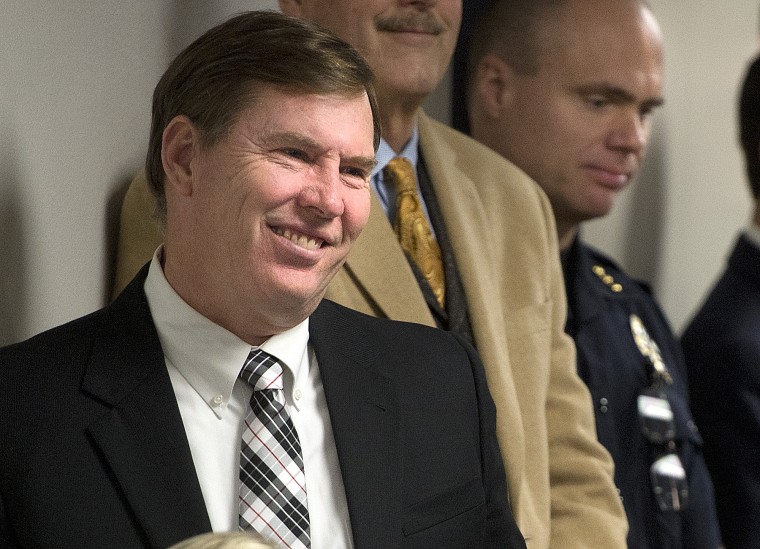 Jarvis Parsons stands with his daughter Erin and wife Aimee while being sworn in as Brazos County District Attorney by Judge Duane Peters (left) at the Brazos County Administration Building on Tuesday.

After the official business wrapped up, Parsons asked Bryan to give an invocation that would help him in his new role.

Parsons' parents, grandparents and aunts made the drive from Louisiana while other relatives came in from Houston, joining members of his church, most of Parsons' 30 or so employees, a few defense attorneys and a handful of courthouse officials.

During a reception following the event, Ronald Parsons spoke not only about the pride he has as a father, but also his happiness in knowing that his 36-year-old son was elected in such a supportive community.

"As a father, you're always concerned when your child leaves your home if they're going surrounded by good people," he said. "Jarvis has always had character of integrity and doing what's right."

Like Jarvis Parsons' father, Turner said he's not concerned about his replacement's ability to effectively lead.

And though Turner said he recently took a job working as a trial lawyer in a private practice in Midland where he grew up, Turner expects he'll be "back and forth" while keeping up with the relationships he's formed while in office.

"It's just a matter of getting in there, rolling up our sleeves and keeping the ball rolling that Turner started," Parsons said later in the day Tuesday.

His first trial as the top prosecutor is set as a death penalty case that starts Monday with jury selection in the capital murder trial of Stanley Wayne Robertson, a 44-year-old College Station man.

He'll work alongside Brian Price, who was named chief prosecutor of the 361st District Court under Turner and will continue under that role.

Not many personnel changes will be made in the DA's office, he said, adding that he appointed Brian Baker as his first assistant and will keep him as trial chief over the 85th District Court.

Ryan Calvert, who was hired as an assistant DA in the fall, was selected to lead the 272nd District Court, a position Parsons formerly held.

Since securing the seat in November, the Republican said he's sat down with Turner on several occasions to discuss the administrative duties of the new job, including budgeting, personnel matters and working with other courthouse and county officials to keep the dockets moving.

"It's a different side of the office," he said of the managerial tasks. "We always learned how to try cases and prosecute criminals, work with our secretaries and on personnel matters -- merging all those is a different beast all together."

And if he finds himself at a loss, "[Turner] is always a phone call away," Parsons said.

Congratulations, Jarvis! May the Lord guide you, keep you, direct your steps and give you wisdom. And may the words of the prophet Micah be the hallmark of your administration: "He has told you, O man, what is good; and what does the LORD require of you but to do justice, and to love kindness,* and to walk humbly with your God?" Micah 6:8

Congratulations Jarvis Parsons. Brazos County is honored and privileged to have a District Attorney of your talents.