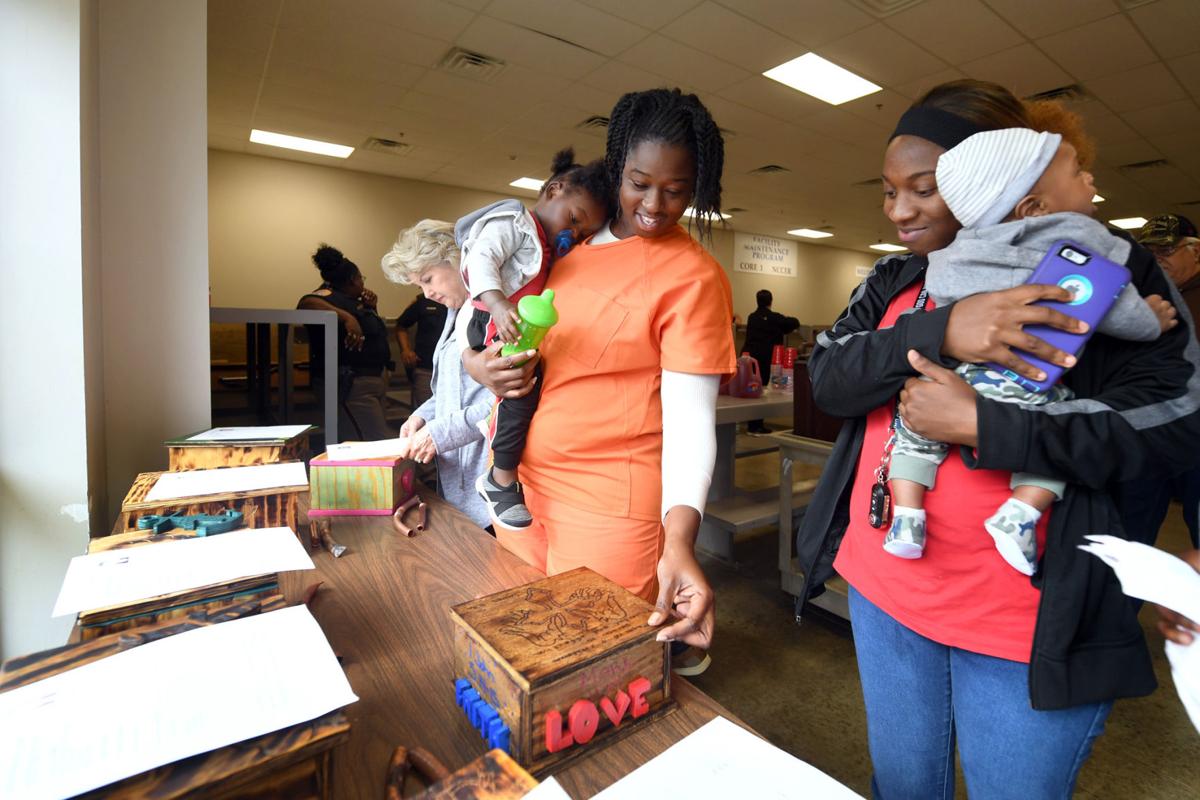 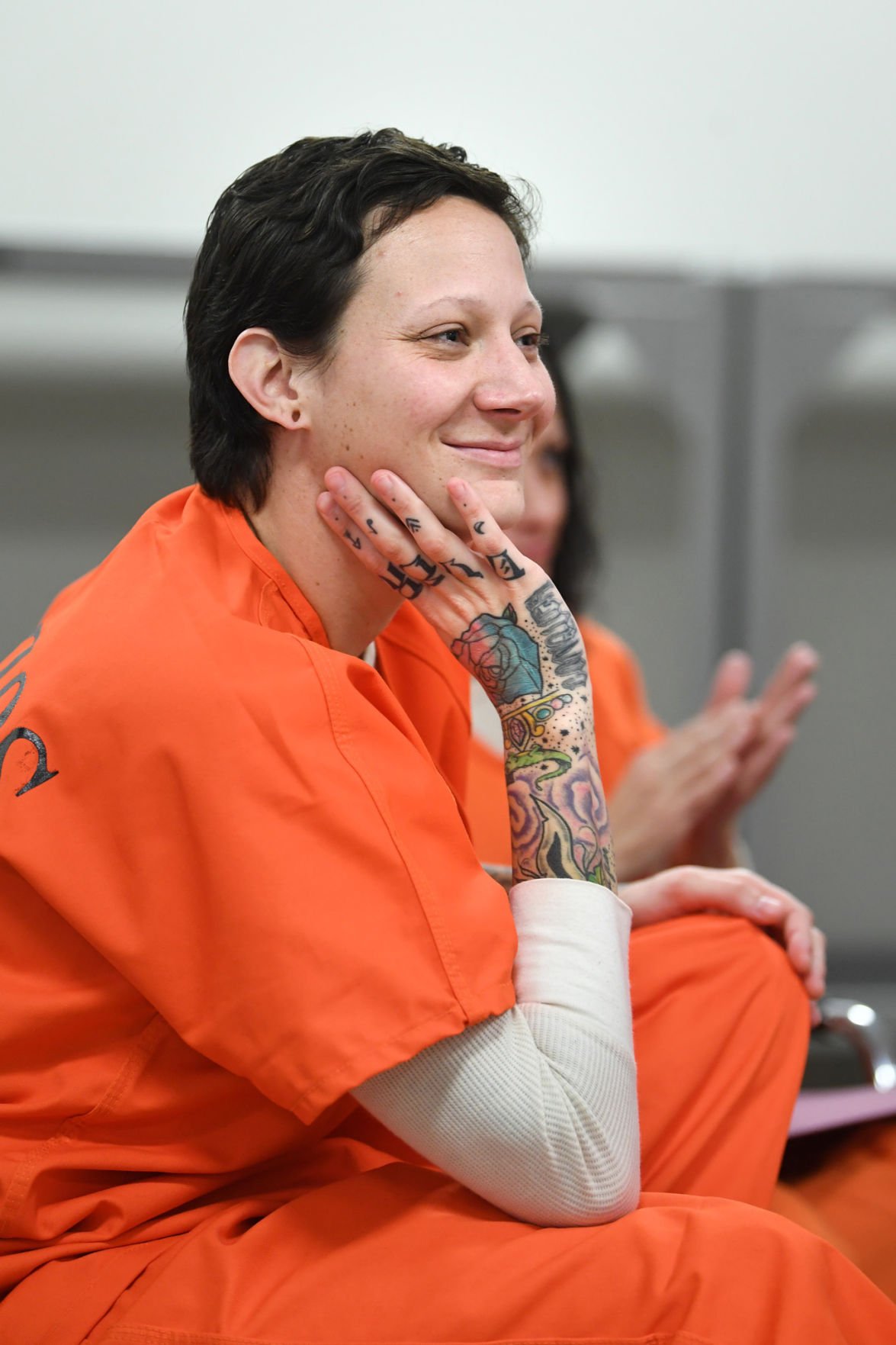 Courtney McFalls listens as a fellow graduate of the Facilities Maintenance Program at the Brazos County Detention Center speaks on behalf of the inmates during Thursday's ceremony.

Courtney McFalls listens as a fellow graduate of the Facilities Maintenance Program at the Brazos County Detention Center speaks on behalf of the inmates during Thursday's ceremony.

Seven female inmates were recognized Thursday in a graduation ceremony at the Brazos County Jail, commended for their completion of trade skills coursework.

On Thursday, Brazos County deputies and jail employees, staff with Blinn College and with the Texas A&M Engineering Extension Service, media members and families of the seven Brazos County Detention Center inmates congregated at the jail’s low-risk facility, where completed projects by the students of the jail’s first all-female Facilities Maintenance Program were on display. These projects included the crafting of a small building’s framework, complete with electrical wiring, and decorative wooden chests. For the past several months, these nonviolent offenders had been studying diligently under a 200-hour course taught by TEEX and Blinn instructors, learning about everything from carpentry to electrical work to plumbing to level one HVAC skills.

“It was wonderful working with them,” said Robert Martin, a carpentry instructor from Blinn College who worked directly with the inmates. “I didn’t have to unteach any bad habits. They were great students who scored all 90s and 100s on tests and who were very proactive in class.”

At the ceremony, the women individually were handed certificates signifying program completion of the National Center for Construction Education and Research Core Curriculum and for OSHA 10-Hour training. Approximately 100 female inmates applied to be taught under the curriculum, but only 10 people were selected, and just seven completed the work. Criteria for program participation included a lack of violent history, good behavior with no disciplinary write-ups for 30 days, and an adequate amount of time remaining in one’s sentence to complete the 200 hours.

While the women received construction training from TEEX and Blinn College faculty, Sheriff’s Office’s re-entry specialist Dayana Borges-Wells introduced a new facet of the program that hadn’t been applied with the inaugural class over the summer. Borges-Wells wanted to ensure that not only would these inmates be technically skilled, but also psychologically ready for return to the free world.

“We had to talk,” she said. “We actually started a cognitive behavioral class called ‘Decision Points.’ I taught them once a week, and it went through four steps of how to make better choices. The goal is to help them change their way of thinking so that they make better decisions.”

The women presented Blinn instructors Robert Martin and Richard Hobbs with a plaque handmade by the students using the woodworking skills they’d learned, engraved “thank y’all for everything.”

The students prepared a speech for the ceremony together, which was read aloud by inmate Bonita Pennygraph.

“Along with the many trades we have learned, Mr. Martin and Mr. Hobbs have done exceptional jobs to make sure we understand our value,” Pennygraph read. “They have told us many times that our past does not define us.”

Borges-Wells told The Eagle that she has kept track of the previous male class and found that 80% of the students have accepted jobs following their release, and after six months only one out of the 12 men had re-offended.

In a brief speech at the graduation, Sheriff Chris Kirk noted that this burgeoning educational operation has blossomed under Borges-Wells’ oversight. The Sheriff’s Office plans to host more courses for men and for women in the future.

“We need cheerleaders out there to help [the students] realize their worth and their potential, and to encourage them,” Sheriff Kirk said, addressing the families in attendance.

He then turned his attention to the students. “In the end, we don’t want to see you back here. We hope that this program will diminish our need for jail beds.”