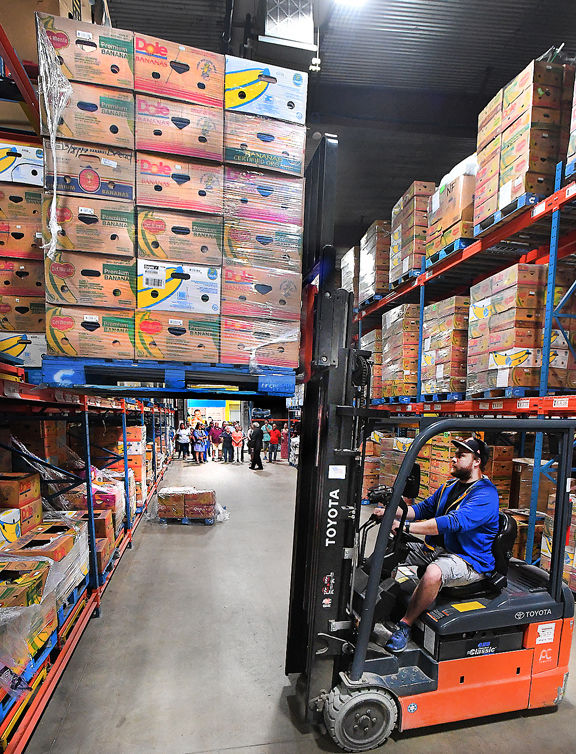 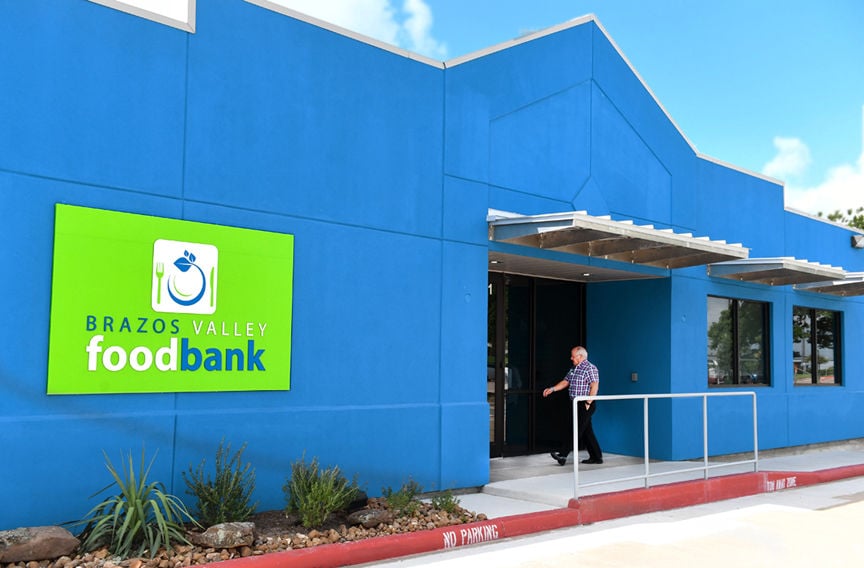 This colorful entrance greeted visitors to the ribbon-cutting of the Brazos Valley Food Bank’s new facility on Wednesday morning in Bryan.

This colorful entrance greeted visitors to the ribbon-cutting of the Brazos Valley Food Bank’s new facility on Wednesday morning in Bryan.

With more than twice the square footage for food storage and volunteer coordination than before, the Brazos Valley Food Bank officially opened its new 44,000-square-foot property Wednesday.

The grand opening and ribbon cutting gave the public a chance to tour the new facility on Independence Avenue, which includes a warehouse and massive fridge and freezer space. For years, the nonprofit has operated out of 17,000 square feet in a much smaller Bryan location. Since 2012, money has been raised to combat issues with storage space.

Initially, the Brazos Valley Food Bank's leaders planned to expand and renovate on their former site. But when a large beer distribution center emptied out just a block away, the stars just seemed to align with an opportunity too good to pass up.

"Before, we could only accommodate 20 people volunteering at once, doing only one activity," said Teresa Mangapora, the food bank's executive director. "And we use volunteers to do all of our packing and sorting here. We have four different work stations sorting at the same time."

The Food Bank was turning away volunteers and some fresh food that needed refrigeration. With the larger facility, a two-story fridge and two-story freezer have been installed to take in fruits and vegetables, and students and church groups can volunteer in a collective effort

The nonprofit also is able to expand on its newly launched program that teaches professional development skills to people in need. With the new property, the Food Bank has established a 15-bed garden that grows vegetables for the pantry.

"Really the ultimate purpose that the garden serves is as a soft-skills application lab for people who participate in the 'Together We Grow' program," said the project's coordinator, Alaina Jalufka. "It's our newest food security intervention program."

Participants with Together We Grow will be tasked with overseeing the garden and management of the garden's volunteers. This, Jalufka explained, will give them résumé-worthy leadership experience, all while benefiting the Food Bank with another continuous source of fresh food. The garden is a new feature not formerly housed at the old location and will be implemented in Together We Grow's curriculum by the fall.

The cost of the new facility has amounted to $5.5 million. Much of that is paid off, but with $750,000 left to go. Mangapora said paying off the balance is something the board is eager to have behind them, as they've had to finance part of the construction and are paying off the building with interest.

"We never had debt here," she said. "It's the first time we've taken it on, and no one on our board, myself included, is comfortable with that."

The Food Bank has had tremendous support from businesses and organizations such as the Mabee Foundation in Tulsa, American Momentum Bank, Randy French of Stylecraft Builders and Walmart, H-E-B and Kroger stores. The nonprofit will continue to accept donations from community members.

Mangapora said providing services for the area is a major necessity.

"Food banks in general are collection sites for food donations," she commented. "We're collecting from lots of places, and what we do with that food here is to distribute it to 37 different nonprofits and churches in the six counties we serve. People come together and get their food from them. We only have one need for one big building. Otherwise, everybody would need to have to have forklifts and a dock, and that's just not feasible."

With more than twice the square footage for food storage and volunteer coordination than before, the Brazos Valley Food Bank officially opened…

H-E-B announced on Thursday a donation of 1.5 million apples to 17 food banks across the sta…

Caliber Collision will be collecting food donations for the Brazos Valley Food Bank through May 11.

Just before 12:30 p.m. Wednesday, Daylan Williams, 12, looked up from reading a book after hearing an adult volunteer announce that lunch was …

The Brazos Valley Food Bank hosted its Mingle for Meals fundraiser at the College Station Hilton on Tuesday evening, featuring speakers who hi…