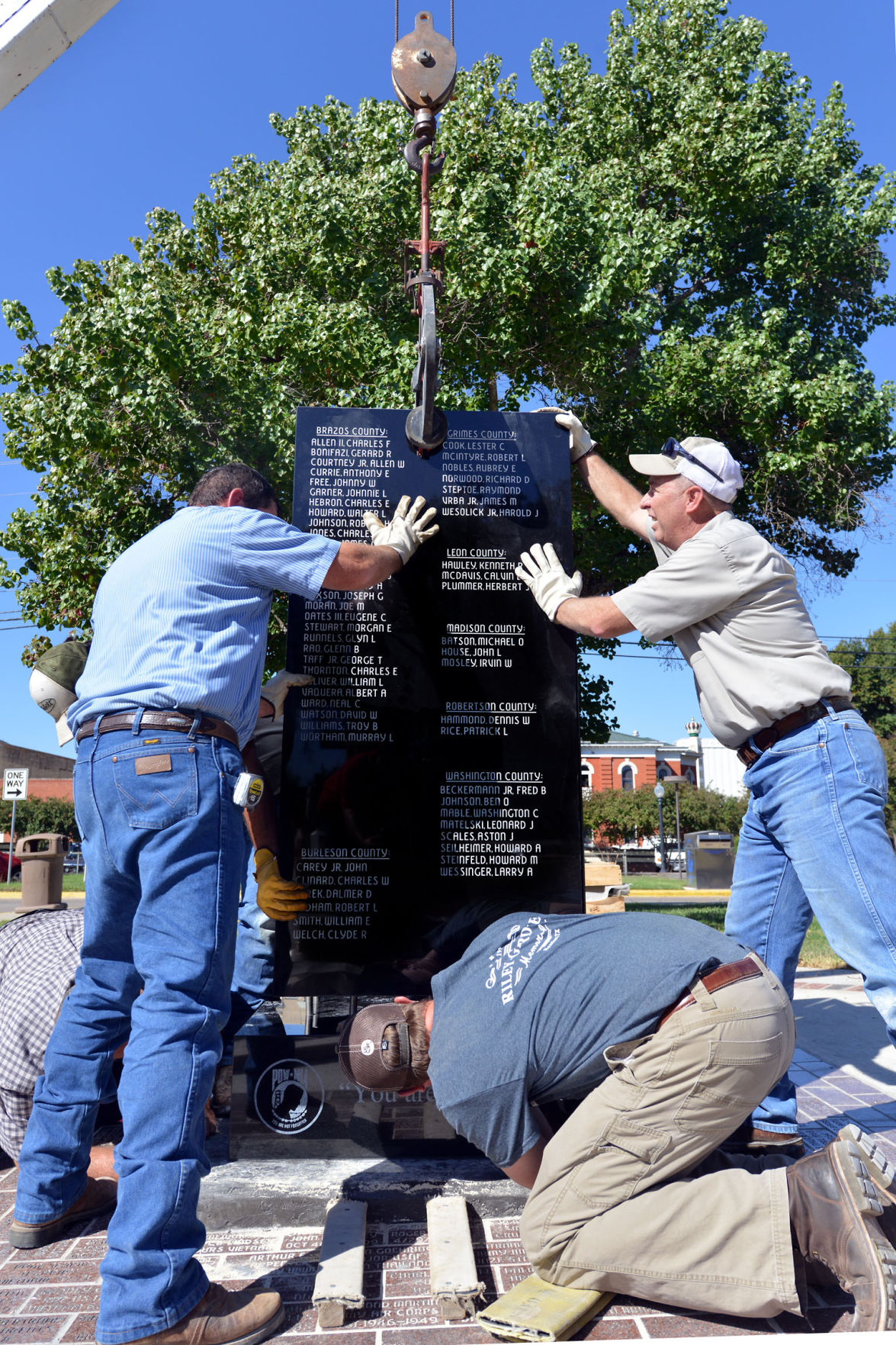 Workers place one of the four granite slabs into place on the Brazos Valley Vietnam Memorial in downtown Bryan Tuesday. The memorial is scheduled to be officially unveiled during a ceremony on Nov. 9. 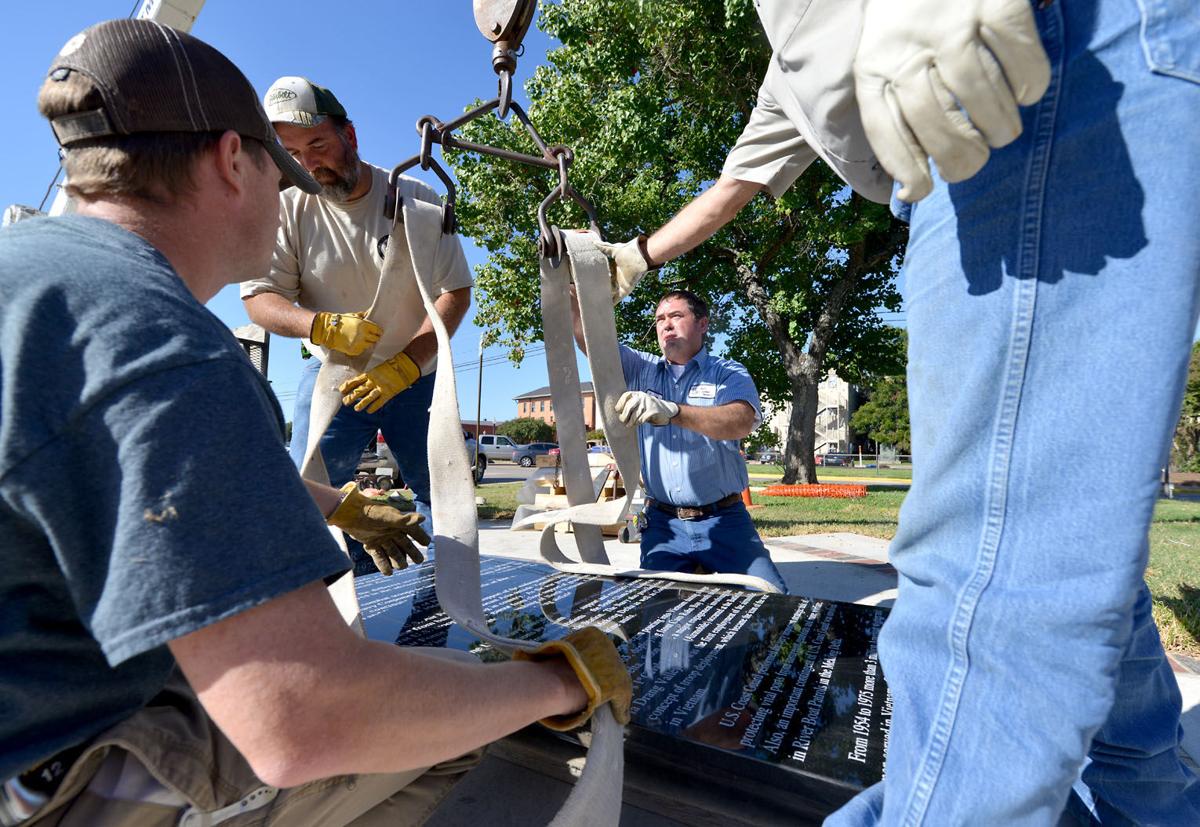 Workers unstrap one of the four heavy granite slabs of the Brazos Valley Vietnam Memorial before hoisting into place Tuesday in Downtown Bryan.

Workers place one of the four granite slabs into place on the Brazos Valley Vietnam Memorial in downtown Bryan Tuesday. The memorial is scheduled to be officially unveiled during a ceremony on Nov. 9.

Workers unstrap one of the four heavy granite slabs of the Brazos Valley Vietnam Memorial before hoisting into place Tuesday in Downtown Bryan.

It took years to plan and six hours to install but the Brazos Valley Vietnam Veterans Memorial has finally found its permanent home outside the Clara B. Mounce Library in Downtown Bryan.

While veterans looked on, Mark Hollas and his crew from Brazos Valley Monument spent six hours installing the 10-foot, 7,000-pound memorial on Tuesday. It stands next to the Bryan Firefighters Memorial Monument and honors Brazos County servicemen who died during the war in Vietnam.

The Vietnam Veterans of American Chapter 937 and past president Mike Southerland set out to create a local memorial more than five years ago but recently finished fundraising and approving proofs for the monument's design.

Hollas and his team spent 60 to 90 days working on the monument before erecting it on Tuesday.

"It'll stand for many years to come," Hollas said, crediting the city of Bryan's engineers for making the foundation.

Made out of black granite imported from China, the monument has the names of locals who died in the war sandblasted on the side. So far, 58 names have been etched to the stone, including 29 from Brazos County. To have their names inscribed in the monument, a serviceman had to have connections to the Brazos Valley by being born, raised or buried in the area or have family here.

The four-sided granite column is topped with a bronze statue of a fallen soldier -- boots, dog tags and an inverted rifle holding up a helmet -- as a "tangible reminder of the sacrifices that have been made," said Mike Griffith, former president of the local Vietnam Veterans of America.

The Brazos Valley Vietnam Veterans Memorial should not be confused with the Vietnam War Memorial at Veterans Park in College Station. While the memorial in Veterans Park honors all Vietnam veterans, the Downtown Bryan memorial will be specific to local men who died in the war.

The Vietnam Veterans of America will host a dedication and unveiling ceremony at 2:30 p.m. on Nov. 9, two days before Veterans Day. They expect about 300 family members of the fallen soldiers to attend.

The group raised more than $70,000 for the project, which will cover the cost of the statue as well as maintenance. The funds were raised through online donations, selling pavers to line the plaza outside the library, selling four $5,000-granite benches, a 10-day carnival outside the Bryan Target and a $25,000 donation from the city of Bryan.

Vietnam veterans and their loved ones honored at memorial unveiling

When the green cover was removed from the Brazos Valley Vietnam Veterans Memorial on Sunday, there were 58 names etched into the black granite…

Thank you Mike for your seeing this project get accomplished. I feel he is a man that will continue to do his best for the citizens of Bryan and deserves your vote for city council.

I am very proud of the men in my family who are Veterans, especially those who are veterans of the Viet Nam war! Congratulations to all who worked so hard on funding this beautiful Memorial to those from our area who gave everything to keep us free! There are no words to fully express our gratitude to the families of these brave men, but I know they must be proud to see their loved ones honored.

Thanks to Mike Southerland for his dedication and determination to accomplish this task. This speaks volumes to his ability to lead, organize, study, and find the best means to an end! We need Mike back on Bryan City Council!

My heartfelt thanks to the Viet Nam veterans for their service. My appreciation for this memorial to remind us all of the sacrifices made for us. Thanks to Mike Southerland and the veterans' organization for raising the funds to have it made and erected. Such dedication is why we need Mike on Bryan City Council.

Congratulations to those who worked to establish a memorial so future generations will be reminded of the price paid by those who fought and died that we remain free.

Thanks to Colonel Mike Southerland whose determination and efforts help make this possible. There are many reasons we should elect Mike to the Bryan City Council but his patriotism and service as a decorated helicopter pilot in Vietnam is proof of the price he will pay for better government.

Happy to see the memorial finally erected. Glad that mile southerland and the Vietnam vets would not waiver In their dedication to see this project through. Another great example why mike is the best candidate for the job it's simple because he cares.

Mike Southerland does great work for the citizens of Bryan...the memorial is yet another example of his dedication to citizen involvement, meaningful action, fundraising, and getting the job done. An honored veteran, we would be proud to have Mike bring his leadership skills back to city council....thanks Mike for all you've done, are doing and will do. Getting the monument project done meant using all of your leadership, consensus building. passion, and orgranization skills to complete a project that honors our warriors from the Vietnam war, a group too often overlook. Thanks Col. Southerland.