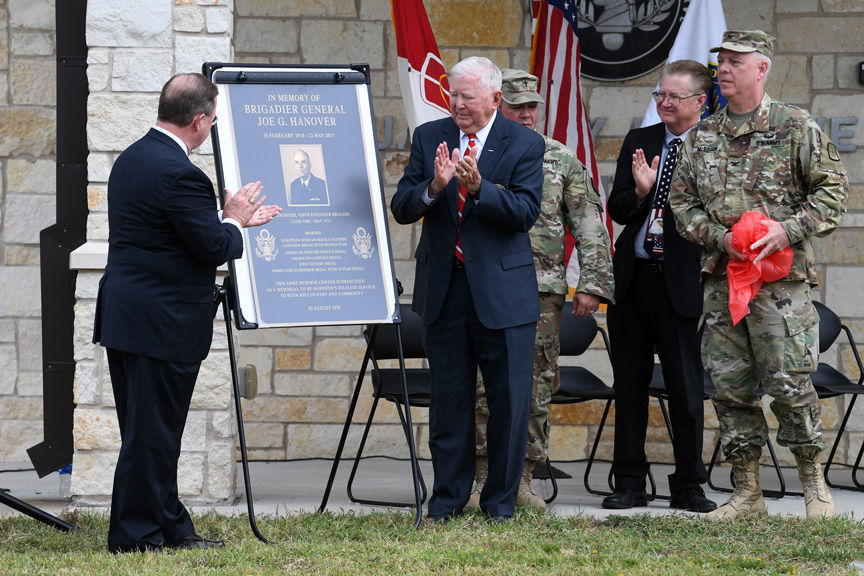 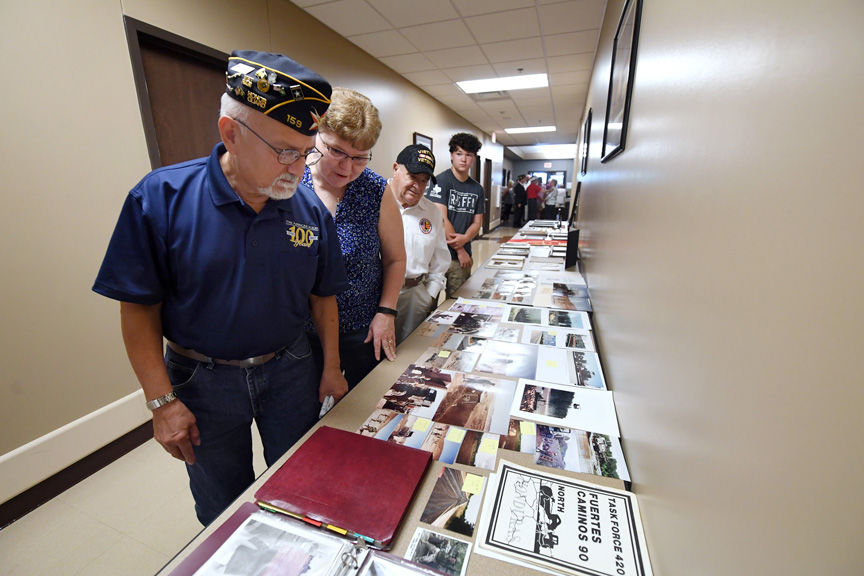 Juan and Ruth Bosquez, left, and Albert Ehrig and his grandson, Joshua Baron, 16, look at photographs and other items displayed in an exhibit honoring Brig. Gen. Joe G. Hanover following a ceremony memorializing the Army Reserve Center in Bryan after Hanover on Saturday. 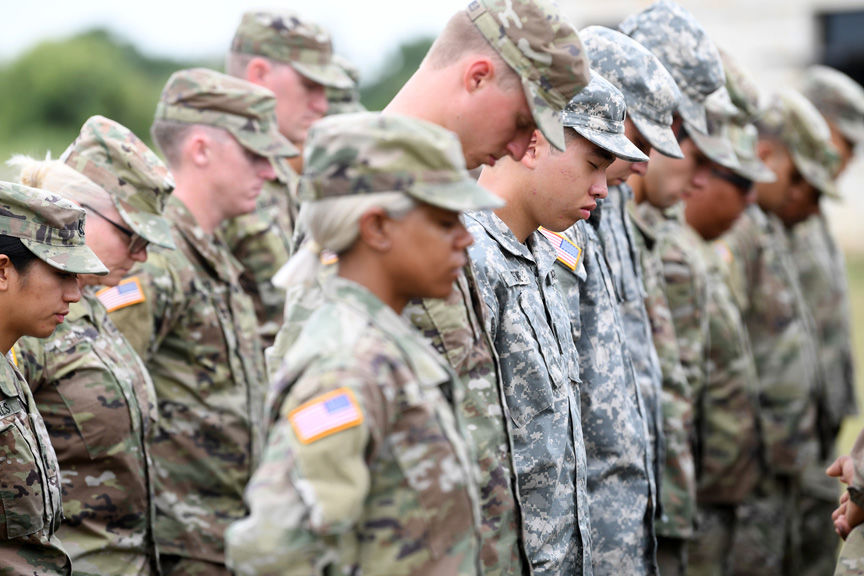 U.S. Army Reserve soldiers pray during the invocation as the Army Reserve Center in Bryan is renamed in memory of Brig. Gen. Joe G. Hanover during a memorialization ceremony Saturday.

Juan and Ruth Bosquez, left, and Albert Ehrig and his grandson, Joshua Baron, 16, look at photographs and other items displayed in an exhibit honoring Brig. Gen. Joe G. Hanover following a ceremony memorializing the Army Reserve Center in Bryan after Hanover on Saturday.

U.S. Army Reserve soldiers pray during the invocation as the Army Reserve Center in Bryan is renamed in memory of Brig. Gen. Joe G. Hanover during a memorialization ceremony Saturday.

Men and women serving with the U.S. Army’s 420th Engineering Brigade reserve unit stood outside the Bryan Army Reserve Center on Saturday in four uniform rows, hands at parade rest, as their officers addressed a small crowd as part of a formal ceremony to rename the center after late Brig. Gen. Joe G. Hanover.

Hanover, who was once in a leadership position with the Bryan-based unit, died in 2017 at the age of 99. He left behind a legacy that inspires, according to current members of the unit known as the “Bullseye Brigade.”

Efforts to rename the facility on North Harvey Mitchell Parkway after the World War II veteran and Aggie alumnus came through U.S. Rep. Bill Flores’ work with brigade members who wanted to memorialize Hanover in a worthy way.

“During that process, we engaged with folks from the community to get their thoughts, and in doing this we learned that he had touched countless lives and truly left an enduring impression on the Brazos Valley,” Flores said.

Hanover, a native of the Central Texas town of McGregor, served his country for more than 30 years. He attended Texas A&M and graduated in 1940. He entered the military as an officer and was called into active duty for World War II, during which he was assigned to the West Coast for defensive precautions.

He led a segregated unit of African American soldiers at one point and reportedly was disturbed by how poorly his men were treated. Hanover was shipped to Belgium with the Army Corps of Engineers, then commanded a prisoner of war camp for German soldiers in France. Upon his return to the U.S., he worked for what is now the Texas Department of Transportation and remained a soldier through the Army Reserve. He worked under the 420th Engineering Brigade in Bryan from 1951 till his retirement in 1971, at times in charge of thousands of people throughout the southern United States.

Alvin Jones, Army Reserve ambassador out of Bryan, was acquainted with Hanover during the general’s time of service and spoke about the man who led him.

“The general was one of my most important mentors, and all of you should understand the importance of mentors in your careers,” Jones said. “He provided guidance to this young officer. ... I had the opportunity to travel with him on many an occasion for training. ... As I traveled with [him] and he observed the trainings and observed the soldiers, he engaged soldiers at every level of rank, asking personal and indeed professional questions. ... When it was obvious that a soldier was intimidated or uncomfortable, Gen. Hanover would just have to make sure that soldier felt so important.”

A memorial plaque was presented to the crowd of current service members, local veterans and Hanover’s surviving friends and loved ones. The plaque will remain on site at the reserve center, bearing Hanover’s name and portrait. Flores also presented the center with a document representing his federal request to rename the center, as well as a folded American flag that had once flown over the Capitol.

Hanover’s sister was unable attend the ceremony because of health reasons, and his wife and daughter preceded him in death. But one family friend with a special connection to the Hanover family watched tearfully as his plaque was unveiled. Michelle Caldwell had worked with the Hanovers as a home health nurse for almost 30 years.

“He was an awesome person who taught me a lot,” she said. “He did a lot of things for everybody, and there wasn’t a person who didn’t like him. I started out taking care of his daughter. She passed away at age 38. Then I took care of his wife. She died in 2012. ... [Hanover] was the type of person where, if he did something, he did it perfectly. I did a lot of travel with him. I took my first cruise with him, we went to Las Vegas — just all over. There were a lot of baseball games.”

Hanover died in May 2017, but Caldwell said his advancing age couldn’t keep him from attending an Aggie baseball game earlier that month. His Aggie dedication ran deep, as did his love for the Army. Caldwell said she enjoyed hearing his stories about the military. Her uncle had been a member of the African American unit Hanover led.

“It was refreshing for me the way he would [talk about] it,” she said. “It was like I was standing right there.”

She said Hanover never wanted to be addressed formally in regards to his high rank as an officer. Such a ceremony as this weekend’s may have made him blush, according to those who knew him.

“I asked him why he never used the [title] ‘general,’ and I said, ‘You are one!’” she recalled. “I would use the word ‘general,’ but he didn’t. He was just that type of person.”

Joe Hanover, a retired brigadier general who oversaw the completion of the University Drive …

Joe Hanover remembers exactly what he was doing 50 years ago Tuesday: Along with then-Texas …