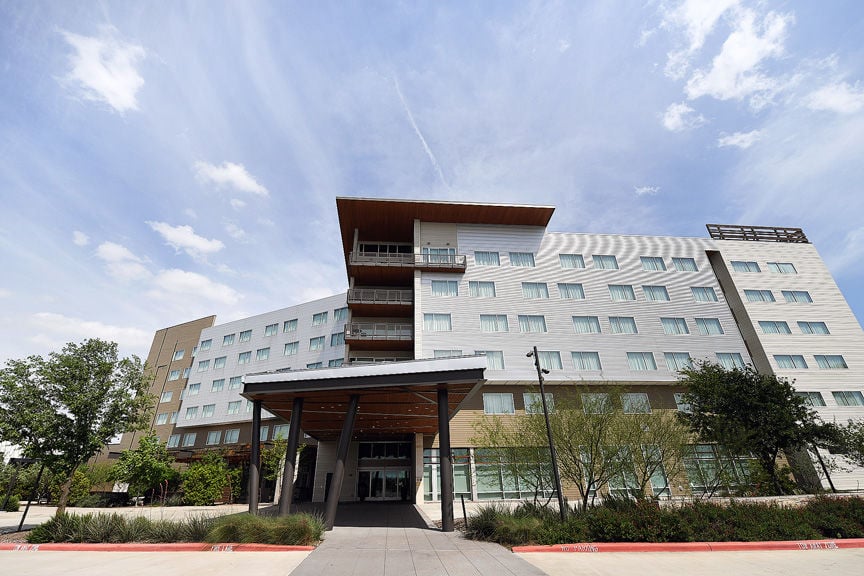 Operations at The Stella Hotel have been suspended through April 30 as local businesses help fight the spread of the coronavirus. 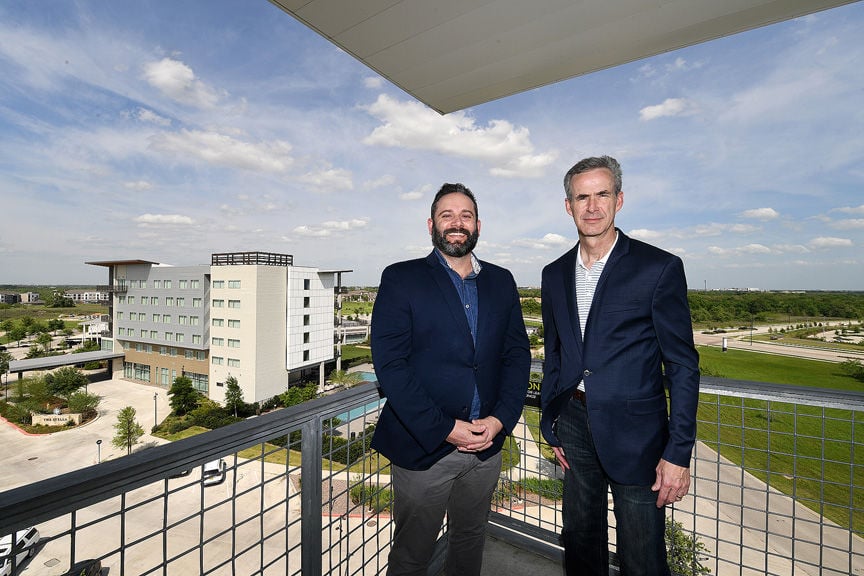 Shane Pappas, left, general manager of The Stella Hotel, and Spencer Clements, president of William Cole Companies, stand Friday at the top of the tower at Lake Walk Town Center. 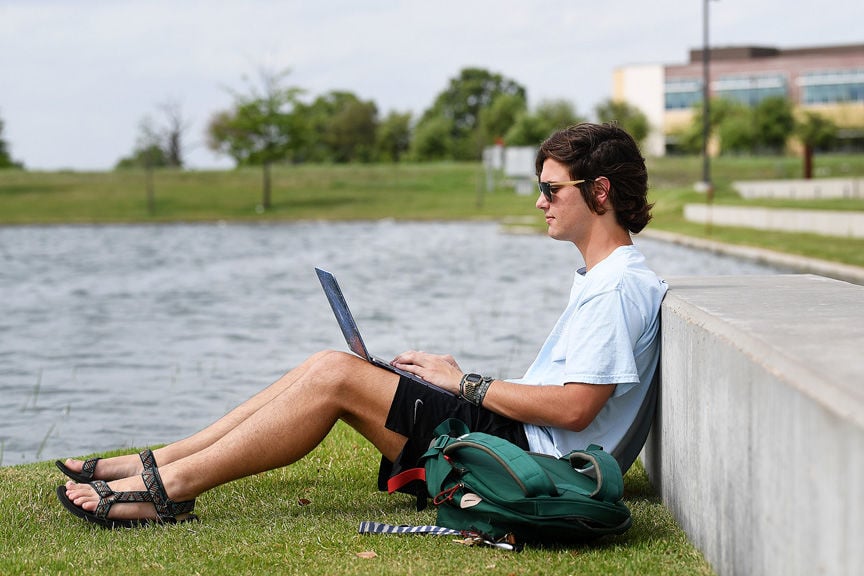 Harrison Coker, a Texas A&M junior and teaching assistant, works Friday on his laptop at Lake Walk Town Center. While businesses are temporarily closed to help fight the spread of the new coronavirus, visitors are spending more time enjoying the area’s green space.

Operations at The Stella Hotel have been suspended through April 30 as local businesses help fight the spread of the coronavirus.

Shane Pappas, left, general manager of The Stella Hotel, and Spencer Clements, president of William Cole Companies, stand Friday at the top of the tower at Lake Walk Town Center.

Harrison Coker, a Texas A&M junior and teaching assistant, works Friday on his laptop at Lake Walk Town Center. While businesses are temporarily closed to help fight the spread of the new coronavirus, visitors are spending more time enjoying the area’s green space.

The COVID-19 pandemic has decimated the local hotel and hospitality industry, with some Brazos Valley hotels closing temporarily and others open but dealing with losses at or exceeding 90% of regular revenue. Some employees have been laid off and others furloughed, with only a handful of core staff members still working at many area locations as typically full-at-night parking lots lie empty.

Two area leaders noted that the hotel industry losses are “massively” larger than those that immediately followed the Sept. 11, 2001, terror attacks and the 2008-2009 economic recession. The American Hotel & Lodging Association posted on its website that hotels nationwide already have lost $2.4 billion in revenue and that nearly 4 million workers have lost, or will soon lose, their jobs.

Locally, multifaceted entities such as Messina Hof Winery & Resort and the master-planned Lake Walk/ATLAS/Traditions area reported a more varied current reality, with some aspects holding steady or thriving even as their respective guest lodging offerings are closed or dimmed temporarily.

Though everything is uncertain, from the duration of shelter-in-place orders to the depth, breadth and length of the coronavirus’ local, national and global impacts, industry leaders articulated bleak appraisals of the present situation mixed with measured optimism about the longer-term outlook.

“Industry-wide, most hotels have seen drops of 90% or more in revenue,” Mayes said Friday. “As a result, both industry-wide and locally, hotels have laid off or furloughed 75%-90% of their employees.”

Mayes said that the local hotel industry was already stressed due to low demand growth coupled with relatively fast supply growth due to the completion of multiple new hotels in recent years.

“One other significant thing I’m seeing is the emotional and mental impact this has had on people,” Mayes said. “There are a lot of really, really good people who have lost their jobs, and they have done nothing wrong — and had absolutely no control over this. ... We truly have never experienced anything like this.”

Kindra Fry, Experience Bryan-College Station’s president and CEO, said Saturday that Experience B-CS has heard from several hotels that have temporarily closed. One hotel decided to undergo renovations, she said.

“We know they are in dire straits at this time, and we want to be able to help them any way we can,” Fry said. “Our role right now is to be a resource for them and understand what they’re enduring. At the same time, we are planning for strong sales and marketing efforts to launch when appropriate in order to put people back in their hotel rooms.”

The 250-room Doug Pitcock ‘49 Texas A&M Hotel and Conference Center posted its second-best fiscal month in February since its August 2018 opening, according to general manager Greg Stafford. Mere weeks later, most of its staff members have been furloughed and over 90% of business has been lost, including all group gatherings, Stafford said.

“We’re dealing with a different kind of crisis than we’ve had to deal with before,” Stafford said. “I happened to be in D.C. for 9/11 and in the Northeast for the great recession. Those were hard crises, but this is a different type.”

Stafford said that a small amount of transient business continues, and a handful of A&M parents have stayed at the hotel as they’ve come in to help move their students home.

Stafford said that the A&M Hotel, a popular spot for business and academic groups to use, has lost all of its group business for April and May. “However, we rebooked 80% of that business, much of it later in this year and some of it in future years,” he said. The hotel is currently working on another $500,000 worth of business, Stafford added.

“We went into this year having an absolutely banner year,” Stafford said.

“We do not consider this to be some sort of permanent situation,” he added. “We don’t know how long this condition will last, but we’re very confident that we will come out of this in very good shape.”

Stafford said that the hotel continues to pay its side of health and other benefits for furloughed employees, and they expect to recover at least 80% to 85% of staff “on the other side” of the pandemic.

The Stella Hotel, at 176 rooms and six stories, has been closed and “dimmed” temporarily, as some staff members are still working, according to Spencer Clements, the Lake Walk/ATLAS/Traditions area’s principal.

“The revenue went off of a cliff virtually overnight,” Clements said. “When your revenue goes to zero and you don’t know how long that zero is going to last, history has shown that those who survive these types of downturns are the ones who act quickly and boldly to stop expenses.”

He said that aside from a core team of employees, other Stella Hotel staff members were furloughed but not laid off, with health benefits still provided at least through the end of April — and “a little bit” of money given to employees upon being furloughed.

Clements said that event reservations have so far largely been rescheduled and not canceled altogether, and added that because Bryan-College Station is largely a “drive-in market” for many conferences and groups that book here, drawing from Texas’ largest cities, post-pandemic recovery could come faster than for markets more reliant on air travel in and out.

“We’re hopeful that late summer and into the fall could be very strong, and that gives us hope that we could bounce back quickly,” he said.

Clements noted that a higher-than-normal number of people have been outside using various parts of the 1,000-acre master-planned area, and said that the Traditions golf course is open for use with moderate alterations, including that golfers are asked not to remove the flagstick from each hole. Construction on homes and other spaces continues, he said.

Karen Bonarrigo, Messina Hof’s chief administrative officer, said Thursday that their 11-room bed and breakfast is closed; a variety of other services and business elements remain, though mostly altered.

“At this point, we don’t have any customers that are coming in to the property at all, but we’re still doing things like curbside pickup if people want to come and pick up wine, or if they want to pick up food from the Vintage House restaurant, they can do that,” Bonarrigo said. Delivery options also are available for those within 15 miles of one of their three winery locations.

“Messina Hof has been part of the Bryan-College Station community for over 43 years now, so it’s faced numerous challenges over the years. We hope and pray that — this is definitely a challenge, and is hopefully one that we can continue to overcome together,” Bonarrigo said.

Fry, Experience B-CS’s CEO, also praised the Brazos Valley community, calling it “resilient” and “one that cares immensely about its people.” She said that several organizations are pulling together to create an upcoming campaign for residents and businesses to embrace and promote when the pandemic subsides.

“As efforts turn to recovery, it will be more important than ever for us all to support our community and its businesses,” Fry said. “We will need to bring more people to our community to host their weddings, reunions, events and meetings. Our hotels and facilities, as well as those they employ and the community overall who benefits from visitor spending, will rely on this business to return and grow.”

As the effects of COVID-19 continue to be felt in the Brazos Valley, community members are h…

A second person who tested positive for COVID-19 in Brazos County has died.

In Texas, Abbott said the state's first ad hoc health care facility to respond to the pandemic will be the Kay Bailey Hutchison Convention Center in Dallas, an original hotspot for the outbreak at the state level.