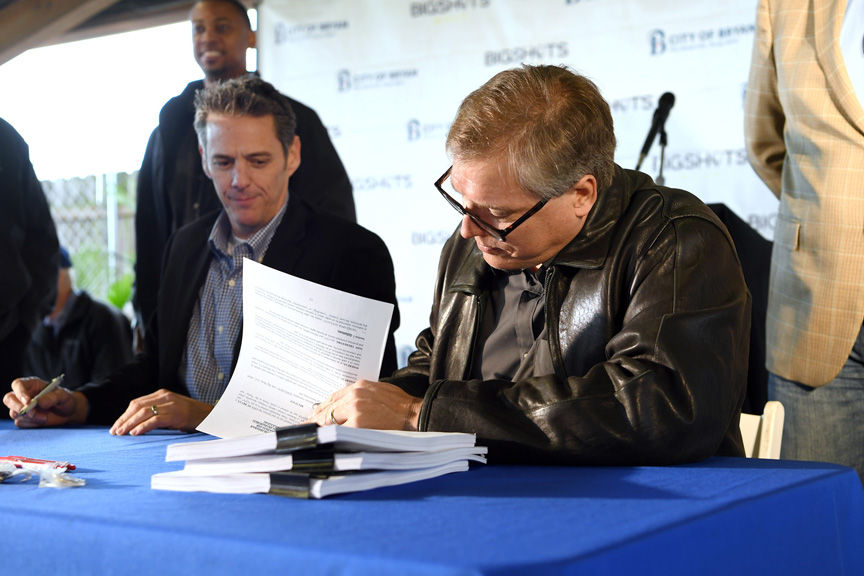 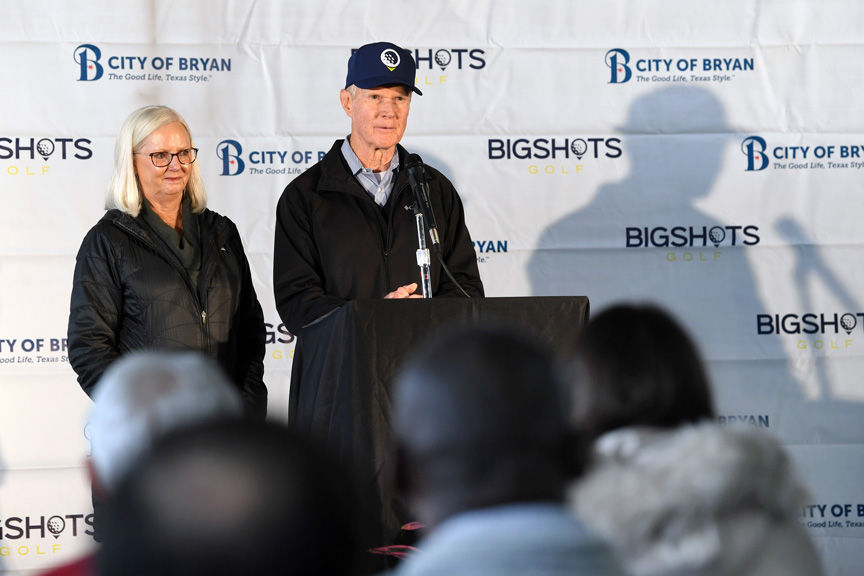 Jim and Allyson Butler speak during Wednesday's Bryan City Council workshop meeting. The Butlers partnered with BigShots Golf and the city to bring the sports entertainment facility to the upcoming regional park. 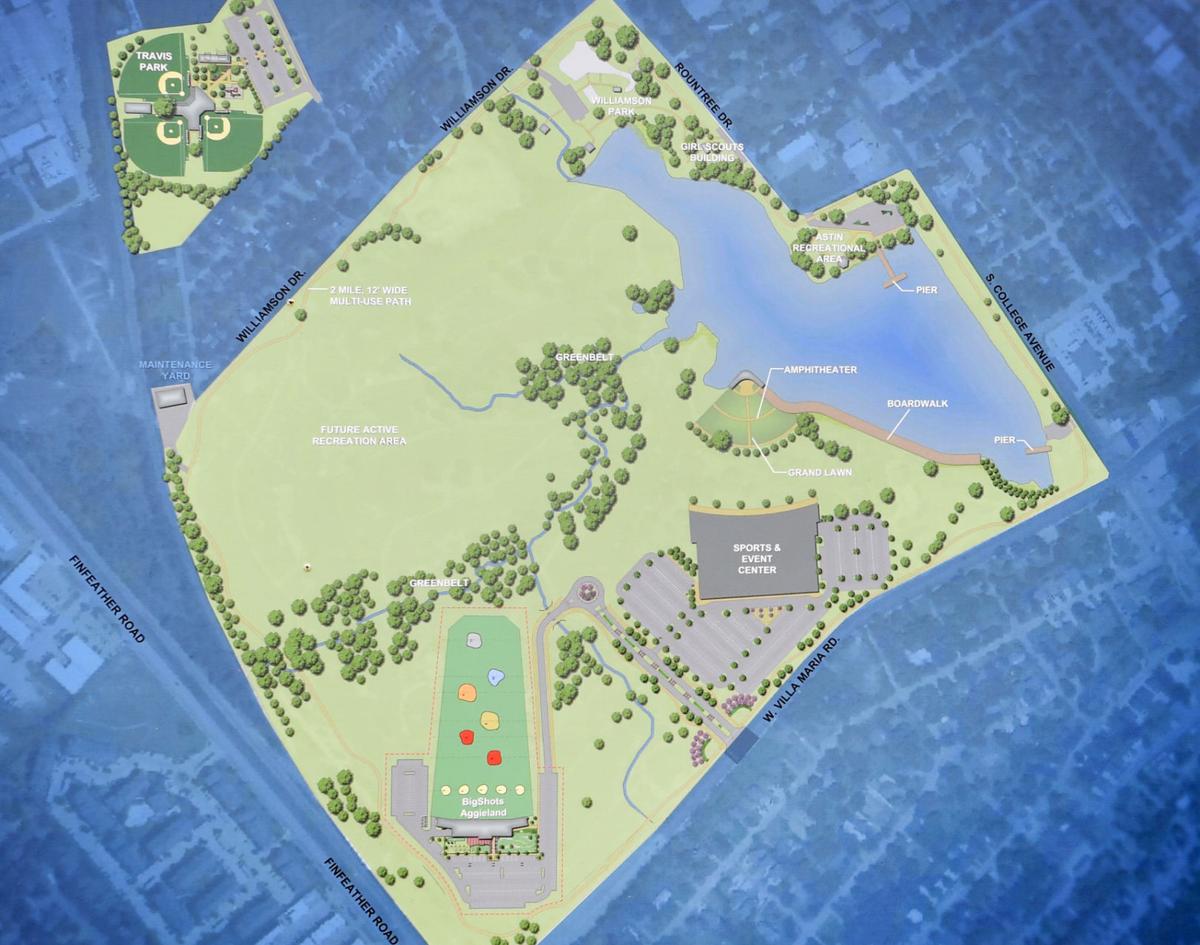 A map of the regional sports complex master plan is posted at the former municipal golf course along Villa Maria Road during Wednesday's signing ceremony.

Jim and Allyson Butler speak during Wednesday's Bryan City Council workshop meeting. The Butlers partnered with BigShots Golf and the city to bring the sports entertainment facility to the upcoming regional park.

A map of the regional sports complex master plan is posted at the former municipal golf course along Villa Maria Road during Wednesday's signing ceremony.

BigShots Golf CEO Tony Wehner and Bryan Mayor Andrew Nelson signed agreements this week that will allow the golf and entertainment company to build its venue and operate on about 12 acres of the upcoming 148-acre regional park.

The city will pay a one-time grant of $100,000 and waive all fees for building, mechanical, plumbing or electrical permits related to bringing BigShots Aggieland to the regional park, which will be located at the former municipal golf course on Villa Maria Road. The ground lease states that by the fifth year, the city will receive ground lease agreement payments equal to 6% of adjusted gross revenue from BigShots Aggieland.

BigShots Golf Aggieland Partners Jim and Allyson Butler said the project includes a two-story, 52,000-square-foot building with meeting areas and restaurant space, 60 game bays, miniature golf and more. BigShots Golf Aggieland will be built on a corner of the property by Finfeather Road and West Villa Maria Road. The groundbreaking ceremony will be in April, and the complex will open in spring 2021. The deal was signed Wednesday at an event at the site.

“This community is getting to the point where we need world-class entertainment if we are going to continue bringing in world-class businesses and make this a world-class community,” Nelson said.

BigShots golfers will be able to play full rounds on virtual golf courses all over the world. Interactive games such as Knockout and Pinball will be available for younger age groups. BigShots also uses a Doppler radar tracking system that shows data such as ball speed and attack angle.

“Bringing family and friends together in a unique environment is what we’re all about,” Wehner said. “We are so excited about this new venue and so excited to bring this to the city of Bryan. We can’t wait to get this open.”

The project was put in motion by Bryan-College Station community members and the Butlers. Jim Butler said he learned to golf at the former municipal golf course and is excited to bring in a business that will allow new generations to enjoy a similar experience at the location.

“We want to continue the legacy of the city of Bryan and the Bryan family and all the memories that have been created on this great venue in the past,” Jim Butler said. “Whether it’s the stories I’ve heard my mother and my father say about learning to play golf here back in the 1930s, to my brother who played on the Texas A&M golf team … we might not be golfing in the same way, but the enjoyment and the stories will continue. There’s no question about that.”

He said construction will cost about $15 million and take 300 days to build. He added that he wants the space to serve the veteran community, to be used to teach children how to golf and be a setting for community fundraisers to support things such as cancer research.

The regional park falls in Councilman Reuben Marin’s district, but he said the positive impact of the project will reach into the rest of the city and beyond. Marin said he is glad that BigShots Aggieland plans to bring in up to 12 full-time employees with salaries ranging from $55,000 to $90,000 per year and up to 120 part-time employees.

Marin said he has heard more positive feedback about the upcoming plans than negative.

“It shows the economic development, the growth that the city of Bryan is committed to, especially in the midtown Bryan area with the regional park,” Marin said. “This is just a springboard. It’s an anchor. It’s a great beginning for the regional park.”

Allyson Butler thanked the city staff and council during the signing ceremony for helping her and Jim Butler work through the process.

“We are tremendously excited about this venture,” Allyson Butler said. “It’s a long time coming. We’ve worked hard. I think our community will enjoy it and have fun.”

The city of Bryan made another step forward in its Midtown development project this week by releasing the Midtown Area Plan.

5,000-plus fish moved from lake at Bryan regional park

Last week, the city of Bryan announced that the first phase of lake work at the regional park on Villa Maria Road is complete.

The Bryan City Council approved the adoption of the Midtown Area Plan at its Tuesday night meeting, but there is still much to be done before …