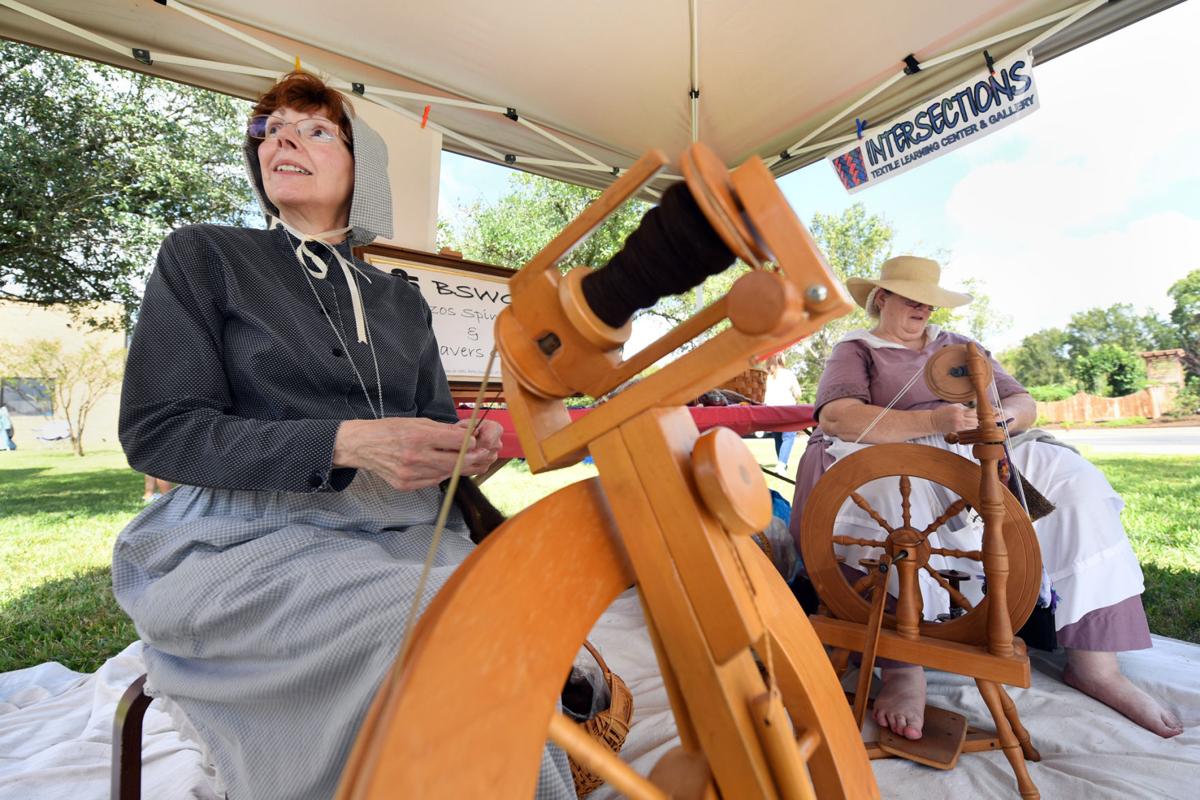 Vicki Anders, left, spins alpaca fleece beside Helen Dewolf under the Brazos Spinners and Weavers Guild tent on Saturday during Boonville Days at the Brazos Valley Museum of Natural History. 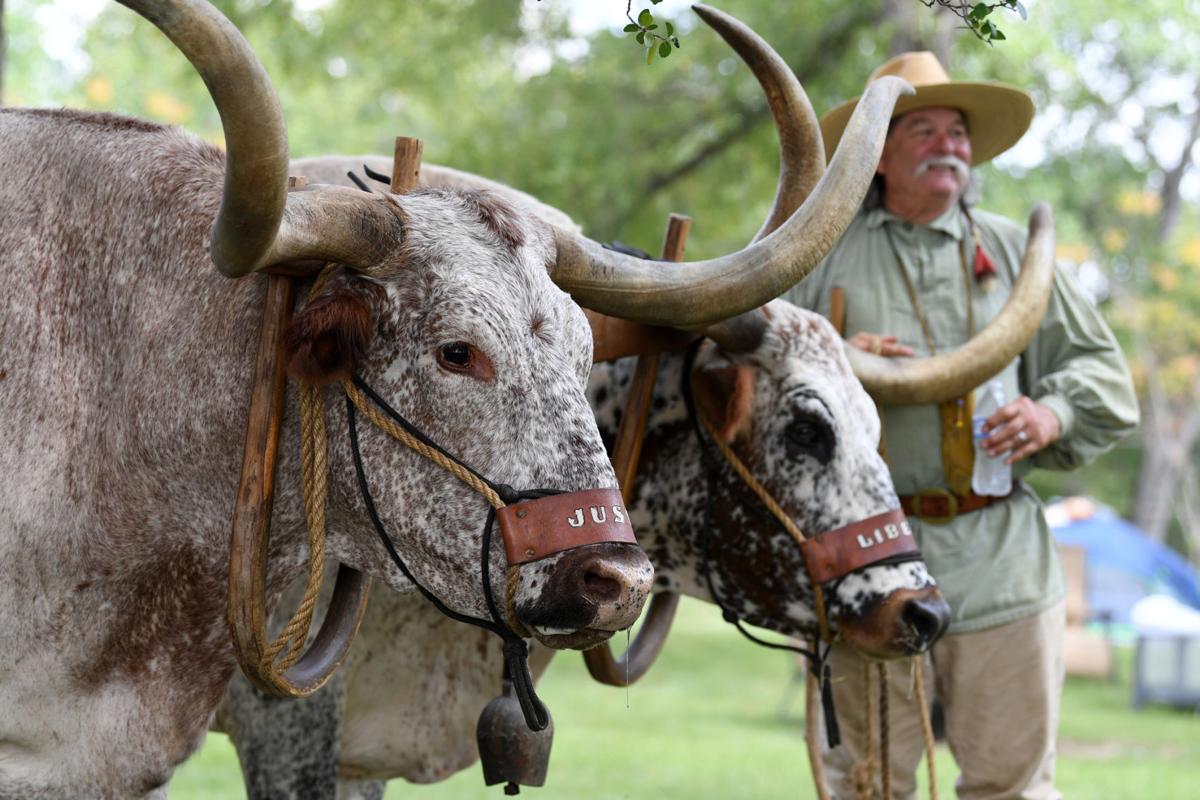 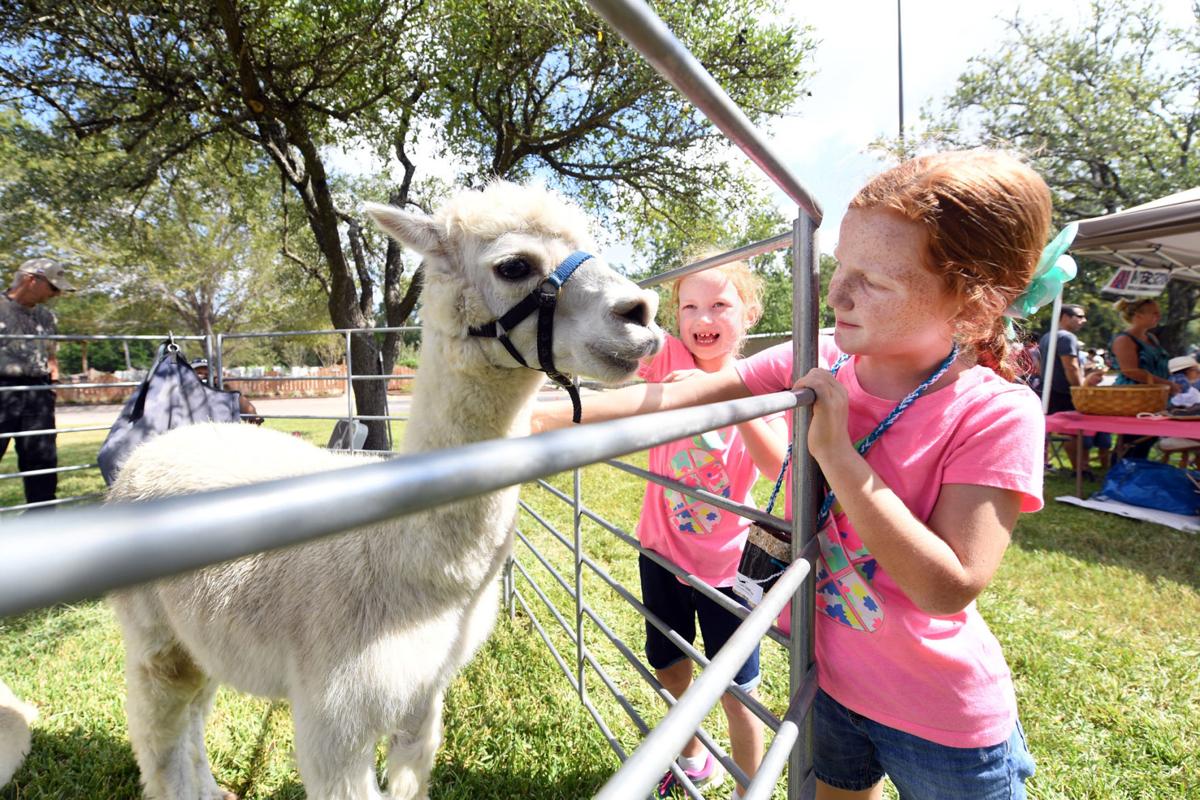 Sisters Ella and Ava Mitchell, both 9, pet an alpaca while attending Boonville Days, a Texas heritage festival, at the Brazos Valley Museum of Natural History on Saturday. 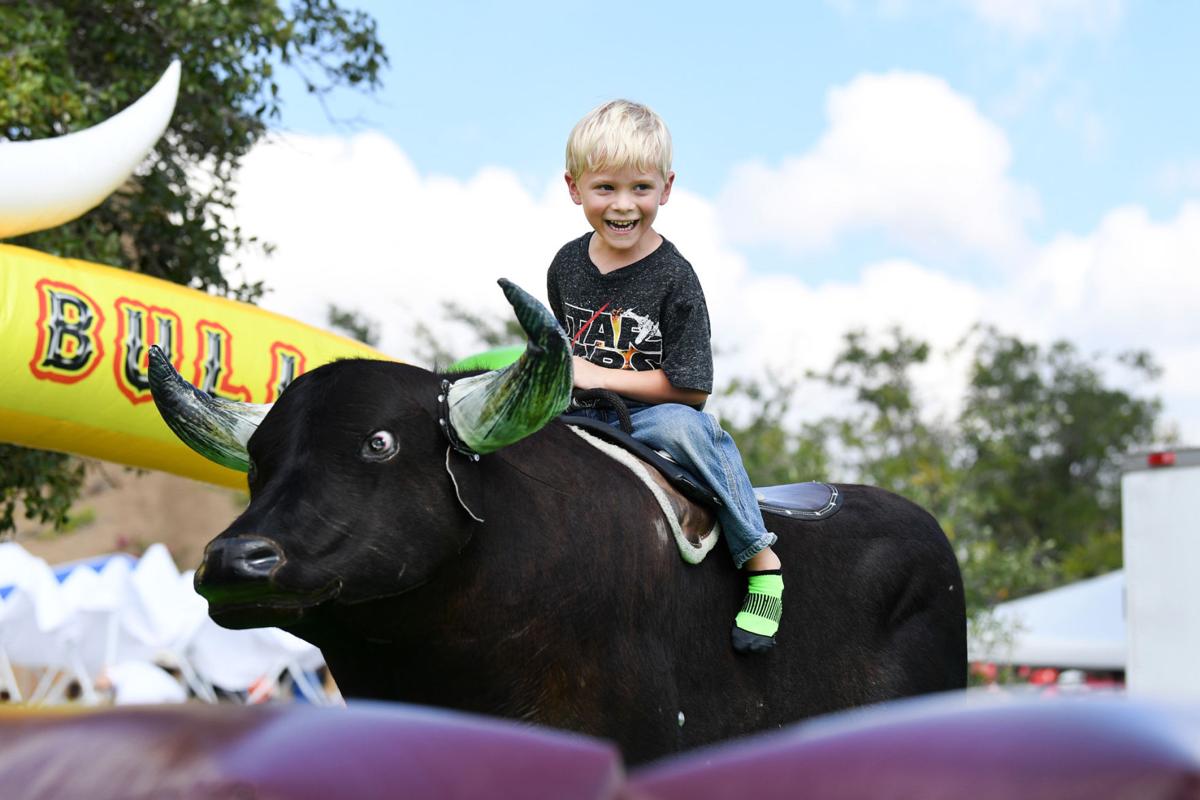 Four-year-old Sam Brumbaugh enjoys a ride on a mechanical bull during Boonville Days at the Brazos Valley Museum of Natural History on Saturday. 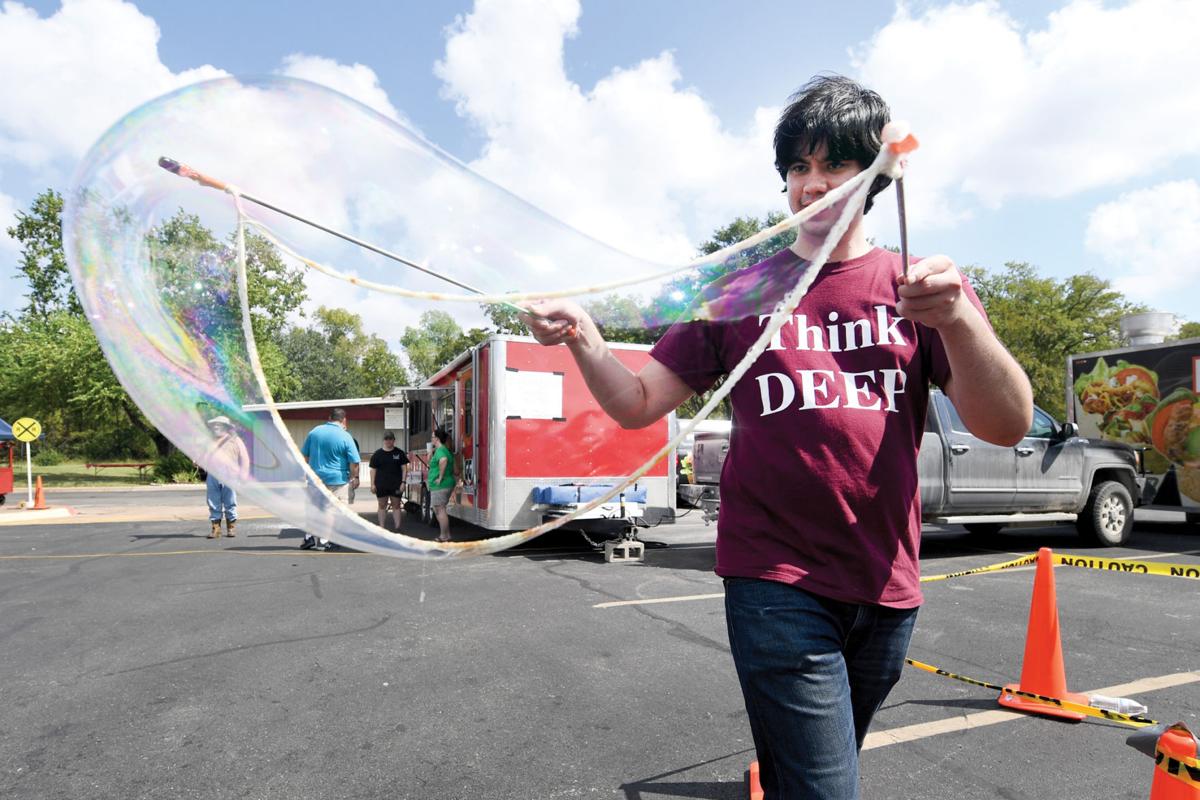 Vicki Anders, left, spins alpaca fleece beside Helen Dewolf under the Brazos Spinners and Weavers Guild tent on Saturday during Boonville Days at the Brazos Valley Museum of Natural History.

Sisters Ella and Ava Mitchell, both 9, pet an alpaca while attending Boonville Days, a Texas heritage festival, at the Brazos Valley Museum of Natural History on Saturday.

Four-year-old Sam Brumbaugh enjoys a ride on a mechanical bull during Boonville Days at the Brazos Valley Museum of Natural History on Saturday.

Wade, of Wellborn, and Ivy, who is from Lexington, were one of four teams at Saturday's annual Boonville Days Texas Heritage Festival at the Brazos Valley Museum of Natural History. the two cooked their meal -- baked beans, chicken fried steak, potatoes, rolls and cobbler -- with authentic 1800s-style utensils over an old-fashioned fire box. Family members with them wore period clothing.

"I mainly do this to get with kids and teach them," Ivy said. "We're a walking history lesson, that's what we are. They see the clothes and guns and know this how it was at one time."

Ivy purchased the old chuck wagon from a friend years ago, and the Wade and Ivy families have been serving up food in chuck wagon competitions across Central Texas for several years. The menu is usually the same, whether at Boonville Heritage or other festivals: chicken fried steak, beans, potatoes, some type of cobbler. The group, known as CBA Wagon, has won several prizes, but the dinner rolls and cobbler usually reaps the awards.

"My roll recipe goes back about six generations," Wade said. "The peach cobbler recipe I got from my mother, and I tweaked it a little till it suited me."

For the two families, the experience is more about fellowship than winning awards. Ivy and Wade got into cooking together more than 10 years ago while attending a local cowboy church together. The men would cook breakfast outdoors for the congregation, but say the wagon was a gift from God.

"I was laying in bed one night, and at about 3 a.m., God came a-knockin'," Ivy said. "Once He comes a-knockin', He doesn't leave. He said I should buy a [chuck] wagon. That was two nights in a row. On the third night, He said to buy a wagon, and my response was, 'Get me the money to do it and I'll buy a wagon.' Two weeks later I had all the money I needed for it and bought the wagon. Hallelujah, praise Jesus."

The wagon cost $4,000 and started the families on their new hobby. Over the years they have searched for antique and authentic items to add to their cooking arsenal.

"I like cooking everything outside, heating your Dutch ovens up, that's what I enjoy most," Wade said. "Most people if you gave them a stick of wood and pot to cook with, they'd have no idea what to do."

In addition to the chuck wagon cooking, the festival offered other attractions for visitors to take part in. Horses, ponies, longhorns, alpacas and other animals were available to pet. Children could make crafts, watch Old West demonstrations of skill, ride a small locomotive, and learn about Texas history.

Letita Alston of College Station was working the pottery wheel for the crowds to watch Saturday afternoon. She admitted that she wasn't fully immersed in the 1800s culture that was being reflected by some, but she still wanted to teach people.

"It's hard to straddle the wheel in a hoop skirt," she said. "But pottery is an old art form, and the process hasn't changed much over time, just the equipment used and the ease of acquiring items."

Children at the festival had the opportunity to make their own pinch pots, and visitors could also purchase finished cups and bowls from the Joy Pottery stand.

"I like the process, making the form; it's fun to make something yourself," Alston said. "I like idea that these things are also useful. People will look at them and touch them and know they were well made."

One new feature of the festival this year had to do with the natural history of Texas. Three live birds of prey who make homes in the Lone Star State were on display through the Urban Interface of Bryan, a nonprofit organization dealing with winged beasts.

"We take rehabilitated, nonreleasable birds and use them in educational programs all over the state," said Andrea Lloyd, who was handling an elderly breeding falcon named Valkyrie. "... "We love to talk about the birds. There's a lot of interest in them since people normally don't get to see them close up."

Visitors had to admire without touching, but could take pictures next to the animals and ask questions. In addition to Valkyrie there was Pandora the female hawk, and Hermes the male great horned owl. Stationed just next to the Audubon Society educational booth, Urban Interface helped in teaching visitors about the animals Texans have shared the land with for centuries.

The festival included live music, demonstrations from science departments at Texas A&M, a tour of nearby historic sites with re-enactors and more. Before the festival Saturday morning, the museum hosted the traditional Buffalo Stampede marathon.

All proceeds from the day's events went to benefit the museum.

Scenes from Boonville Days, a Texas heritage festival, at the Brazos Valley Museum of Natural History on Saturday, Oct. 14, 2017.

Boonville Days festival on Saturday expected to be biggest yet