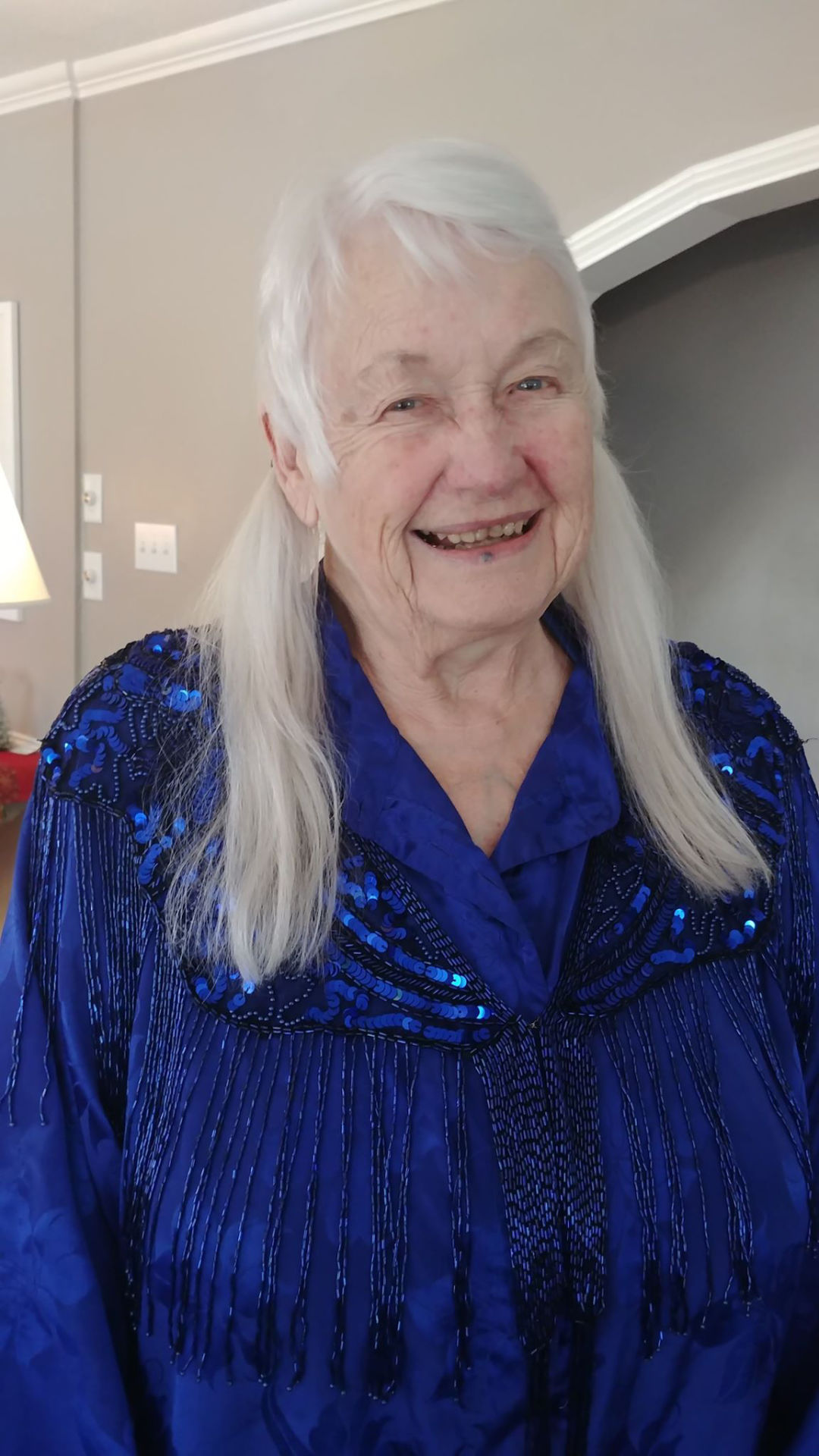 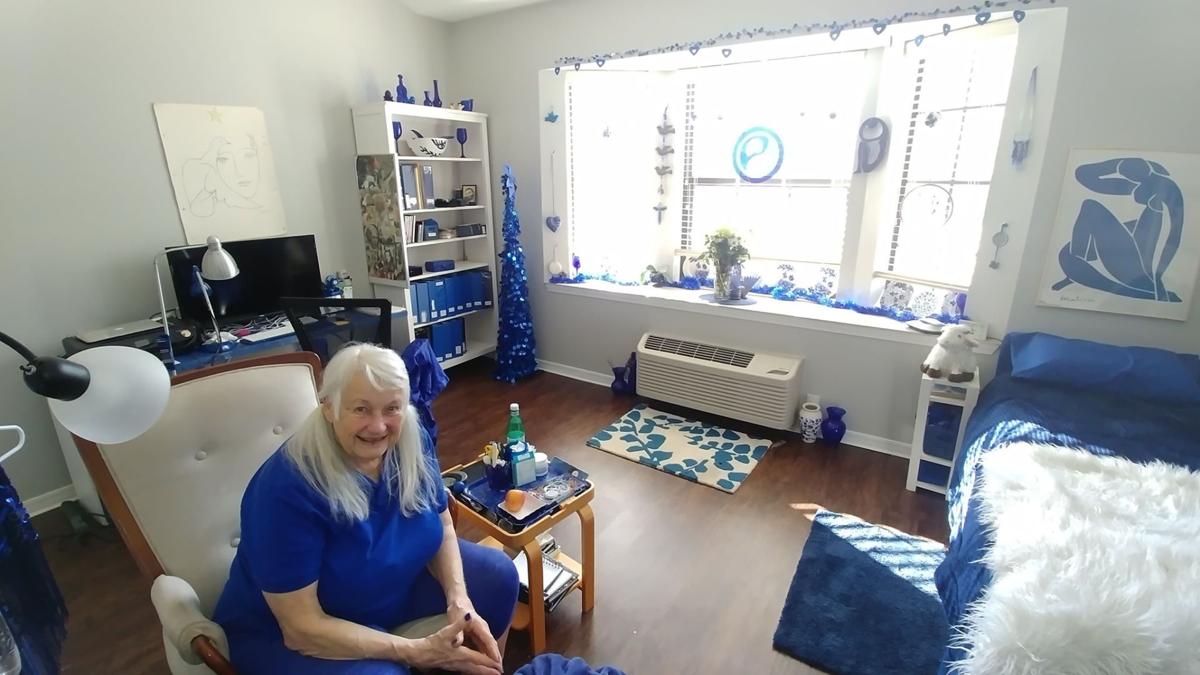 Jewel Ann Bergan-Brumbaugh sits in her room at The Waterford in College Station in 2019. 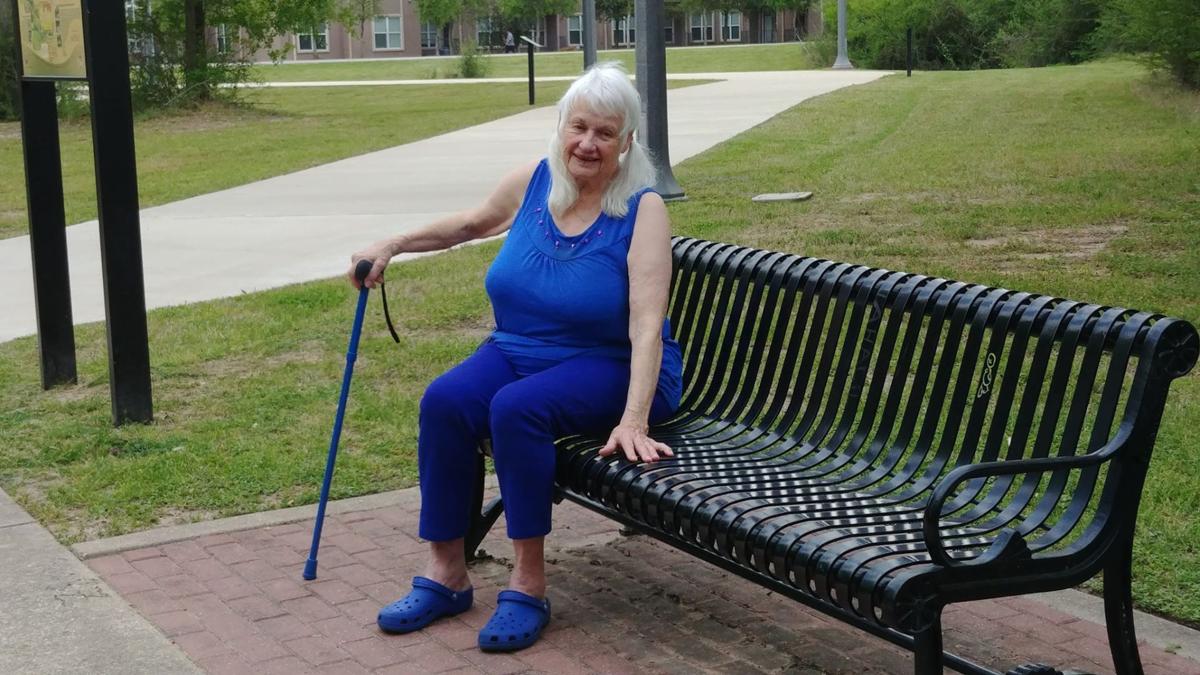 Jewel Ann Bergan-Brumbaugh sits in her room at The Waterford in College Station in 2019.

Jewel Ann Bergan-Brumbaugh, a College Station resident, died Tuesday night at age 81 from COVID-19, according to her family. Bergan-Brumbaugh is the third person to die in Brazos County from complications due to the coronavirus.

In phone interviews with The Eagle on Wednesday afternoon, Bergan-Brumbaugh’s family remembered “Gramma Blue” as a vibrant woman who possessed a wide variety of skills, from welding to painting to baking to carpentry, as well as a fierce love for family members and a wide network of friends.

Bergan-Brumbaugh died in the ICU at Baylor Scott & White, according to one of her daughters, College Station resident and musician Chris Mabe. Bergan-Brumbaugh was admitted to the hospital the morning of March 25; Mabe and other family members were unable to see her or speak with her directly due to COVID-19-related precautions, compounding further their collective sadness and grief.

Bergan-Brumbaugh was born Jewel Ann Brumbaugh on Feb. 8, 1939, in Wenatchee, Washington, which is about 145 miles east of Seattle.

“Mom has just been universally loved by people who are just enchanted by her. She’s so different — challenging sometimes, but beautiful and vibrant,” Mabe said. “She loved life; she loved traveling, she loved people, she loved food, she loved the back roads and she loved adventure. She just had a fabulous time at everything she did, always.”

Mabe said that her mother lived in The Waterford at College Station, an assisted living facility. The Brazos County Health District said Tuesday that multiple Waterford residents have tested positive for COVID-19, and the facility was following guidance from both its corporate office and the Texas Health & Human Services Commission. According to KBTX-TV, the county’s first two coronavirus-related deaths were connected to Waterford.

The health district told local media outlets midday Wednesday that a woman in her 80s who was hospitalized had died from the virus.

Mabe said that her mother, who previously had been diagnosed with vascular dementia, had not displayed many of the symptoms usually associated with the coronavirus, though she added that Bergan-Brumbaugh had experienced some “fatigue, weakness and confusion” two days before the fall that led to the emergency room trip.

Mabe got a call at around 3 a.m. March 25 that said her mother had fallen and hit her head and was already en route to the emergency room. Later that morning, when the health practitioners at Baylor Scott & White noticed some shortness of breath, they called for a chest scan. According to Mabe, a subsequent test revealed that her mother had COVID-19. Mabe and her family got the official word the morning of March 26.

Mabe said that her mother’s condition deteriorated further over the course of the day March 26, experiencing shortening of breath and panic attacks, among other symptoms, and then fluctuated over the weekend before dipping Monday. She entered end-of-life care Tuesday after the family was given the choice to continue treatment and try for a “partial recovery,” in Mabe’s words, or to give her medicine, comfort care and remove the oxygen.

Mabe and her brother, Curt Anderson, said their mother had previously expressed the desire to be allowed to “let go.” On a conference call with their sister, Brooke, the decision was made.

“For the last two years, she had said that if things get hard like this, she wanted to go — just to let her go,” Mabe said.

Voice heavy with emotion, Mabe said that the family was told Tuesday afternoon to expect that “Gramma Blue” would pass within minutes or maybe a couple hours. She died at 9:04 p.m. Tuesday, Mabe said.

“It’s just so awful because I couldn’t be there,” Mabe said. “It’s one thing to die with your family in the room knowing you’re ready … but she was alone, and she had this really wonderful, caring staff. They were amazing, but they had to fill in for us and for all the other families.

“I could not talk with her because of the COVID, so nurses would take messages. She couldn’t look at Facebook on her computer to see what people were trying to send to her. I didn’t get to be there to make it better.”

Anderson said that his mother had anxiety about hospitals, and he similarly articulated grief at the isolation.

“I just know how racked with anxiety that must have made her feel, and that was the hardest part — to not be able to be there in the room holding her hand and stroking her hair and to tell her, ‘I’m with you and I love you,’” Anderson said. “That is the hardest thing about this disease, is the isolation. We are human animals who need each other physically to be OK — and to have that taken from us, that is our humanity.

“I’m so grateful that they were as responsive as they could be. They kept her comfortable and turned on MSNBC for her [on Wednesday] so she could watch it, even though she couldn’t hear it,” Mabe said.

Mabe and Anderson described their mother as creative and multi-skilled. They both said she loved the color blue — her wardrobe, nails and, in her later years, her nickname of “Gramma Blue” all a reflection of her favorite hue.

“She was a beauty queen and was just about the most competent person you could ever meet. She could do just about anything, and had an amazing talent as one of the top engineers I’ve ever known,” said Anderson, an engineer himself.

Anderson, who lives in Los Angeles with his wife, Heather Stanfield Anderson, said that his mother in past years traveled the country in “Dove,” her blue van, and spent extended time with loved ones.

“Her energy was boundless,” she wrote. “She was an incredible cook and seamstress, but she also knew carpentry and welding and auto repair and plumbing. She could do almost anything.”

Heather also wrote that she valued getting to watch her mother-in-law play with their daughter, Zola, who is now 22, as she grew up. “Gramma Blue ... knew how to really play, not like a regular grown-up, and she and Zola would spend hours together, having the best time,” she wrote.

Anderson and Mabe said that their mother’s desired celebration of life, a large gathering of family and friends, will come eventually.

“She and I had a connection that was — we could talk easily with each other, but we could also understand each other wordlessly,” Anderson said. “I’m sure I’ve got a crash coming, but part of my handling her passing right now has a lot to do with her presence with me — always. She is always with me. She’s with me now, and I really feel her every day I’m alive.”

Brazos County health officials confirmed five additional cases of COVID-19 on Wednesday, bringing the total number of cases in the county to 68.

As layoffs and furloughs connected to the COVID-19 pandemic push people into ever-greater financial peril, food banks and pantries in the Braz…

Kenneth Ray “Ken” Beerwinkle died April 16 from COVID-19 complications at age 82, according to his family. In phone interviews Wednesday and T…

Thirty-two of the 47 residents at the Waterford of College Station have tested positive for COVID-19, a public relations firm hired by the com…