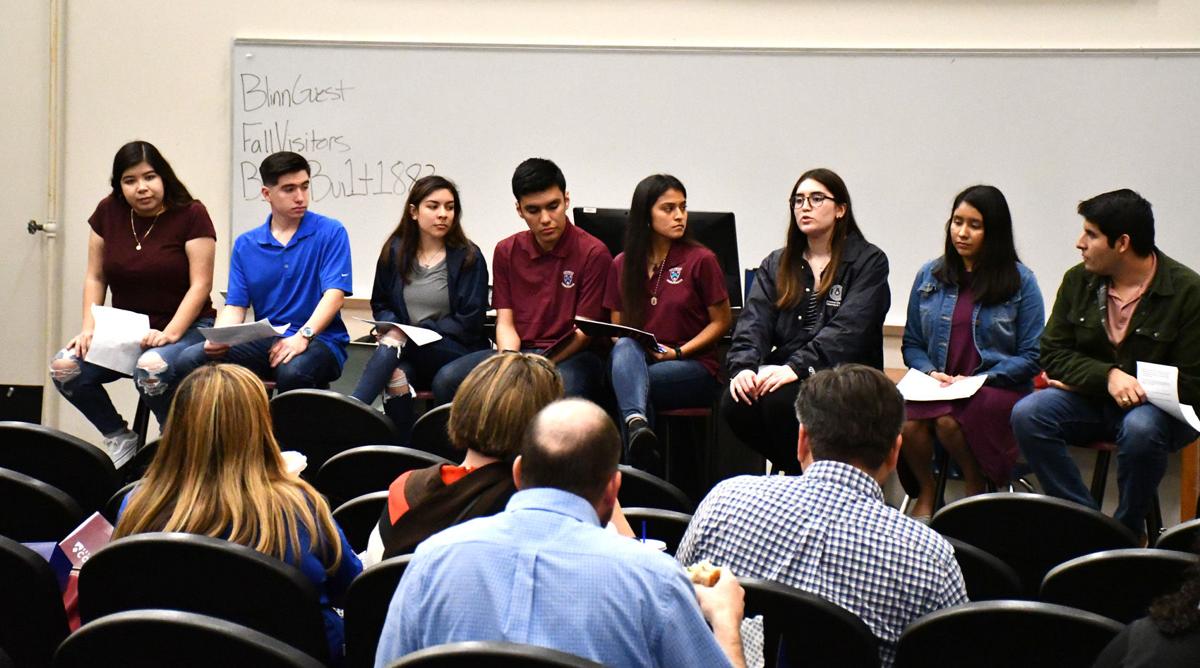 Bryan Collegiate High School students and alumni participate in a panel discussion on the Blinn College campus Wednesday morning as part of a learning tour put on by the Texas Education Agency and Educate Texas. BCHS was selected, out of about 200 early college high schools in the state to be showcased. 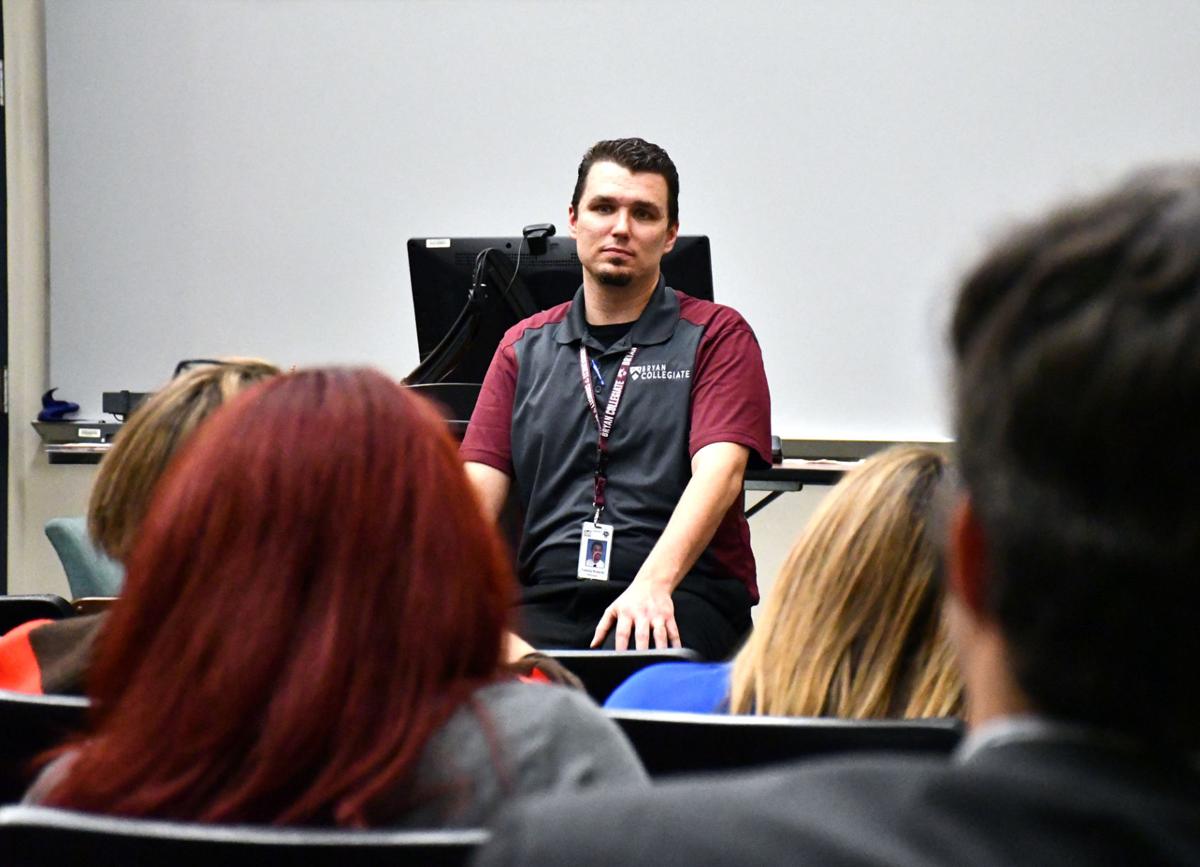 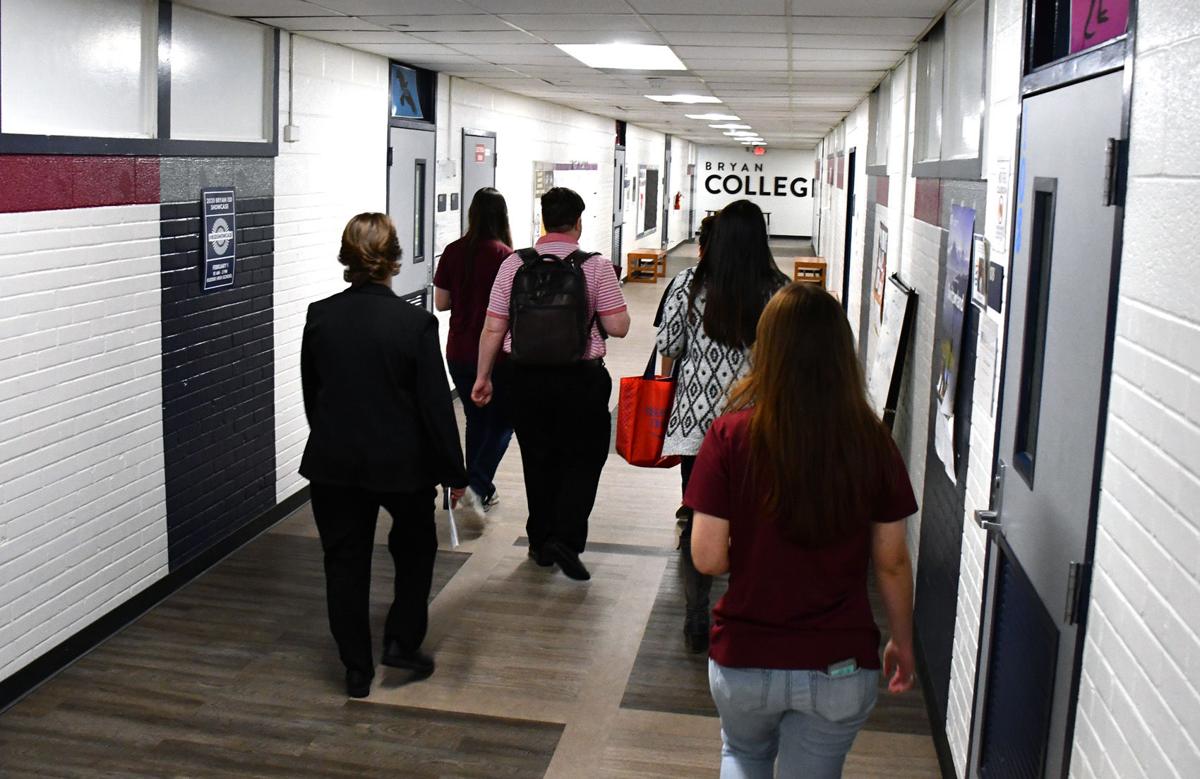 Bryan Collegiate High School students lead a group of educators on a tour of the BCHS campus Wednesday.

Bryan Collegiate High School students and alumni participate in a panel discussion on the Blinn College campus Wednesday morning as part of a learning tour put on by the Texas Education Agency and Educate Texas. BCHS was selected, out of about 200 early college high schools in the state to be showcased.

Bryan Collegiate High School students lead a group of educators on a tour of the BCHS campus Wednesday.

Educators from across the state traveled to Bryan on Wednesday morning to tour the Bryan Collegiate High School campus and discuss how the early college high school operates.

The visit was part of a learning tour hosted by the Texas Education Agency and Educate Texas.

The entities -- TEA as a governmental agency and Educate Texas as a nonprofit -- conduct three learning tours each year, one for each of the postsecondary preparation programs in the state. Bryan Collegiate was the only campus selected to represent the early college high school program.

"Bryan has been doing good work and probably hasn't always been highlighted for the things they do, so it was time," said Susan Henderson, deputy director of programs at Educate Texas. "We're anticipating that the 40 some-odd folks that came today … will have a chance to see how Bryan implements this model, because it's implemented very differently all over the state."

BCHS Principal Tommy Roberts said the school's selection as the representative for the early college high school model is a testament to the work the students, staff and administrators have put in since the school opened in 2007.

"The hope is that they get some ideas to take home and to help their community and help their kids be successful," he said.

The group, which took part in student-led tours of BCHS and breakout sessions with representatives of BCHS, Educate Texas and TEA, included experienced leaders in the early college high school model and those new to the process.

Beatriz Guajardo, an upper school instructional coach at Brooks Collegiate Academy in San Antonio, participated in the tour with two others from her school to get ideas because they are new to the early college high school program. The school is in its third year, she said, and they are in the process of establishing the culture that will work for the campus and the community.

"Because we're new to this, this is why we're here, so that we can absorb a lot of what we see here and perhaps replicate it and make it our own kind of thing," she said.

Even though graduates might end up enlisting in the military or going straight into the workforce, Roberts and former BCHS Principal Christina Richardson said, it serves to give students options for whatever they choose to do.

Richardson, who now serves as the director of advanced academics in the Bryan school district, said the school's idea of success evolved from the original thought that success meant having every student go on to Texas A&M.

"We had so many times we struggled and things we tried failed, and at points just sitting there saying, 'We don't know what else to do,' " she said. "But to help others and give them those ideas when they're in those same situations. It's what we'd love to do."