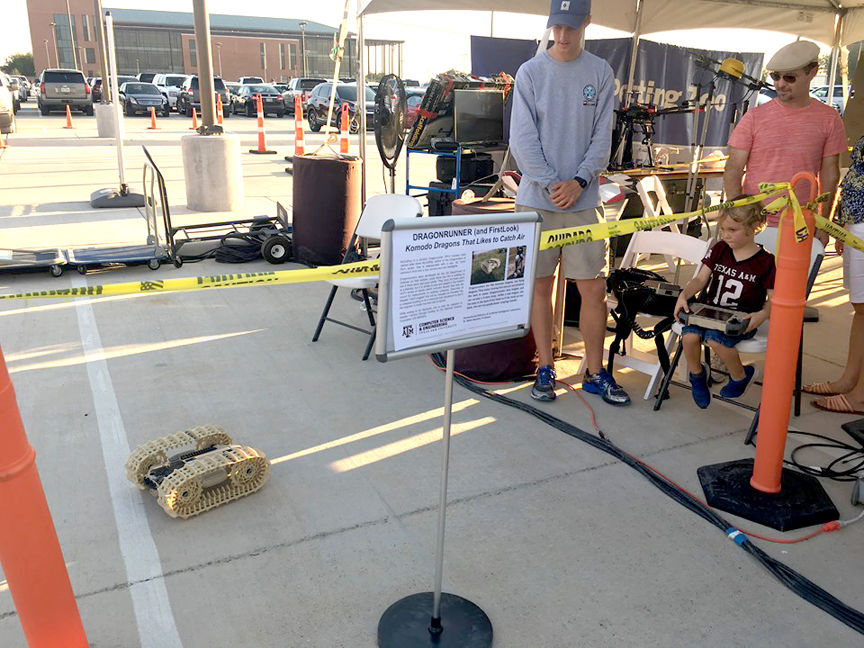 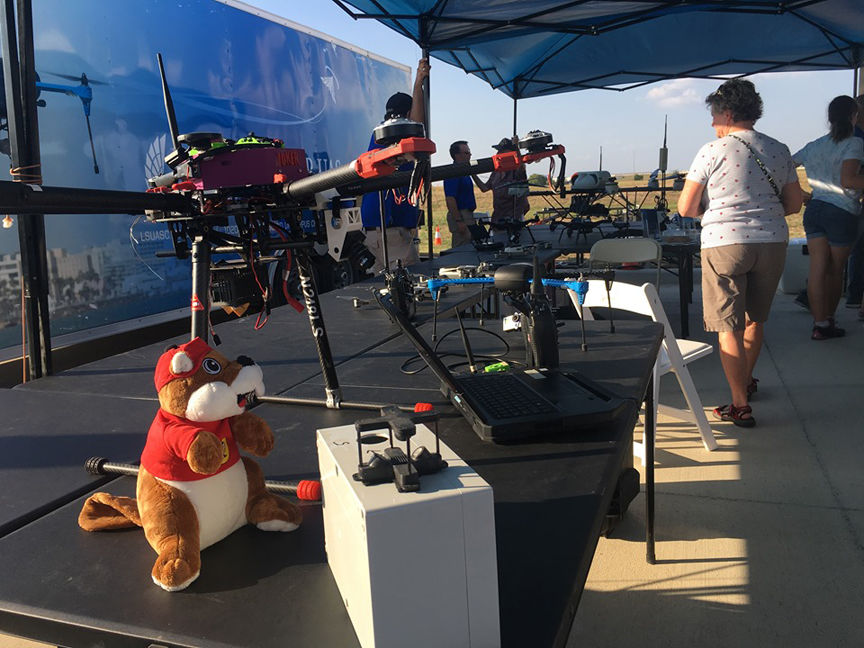 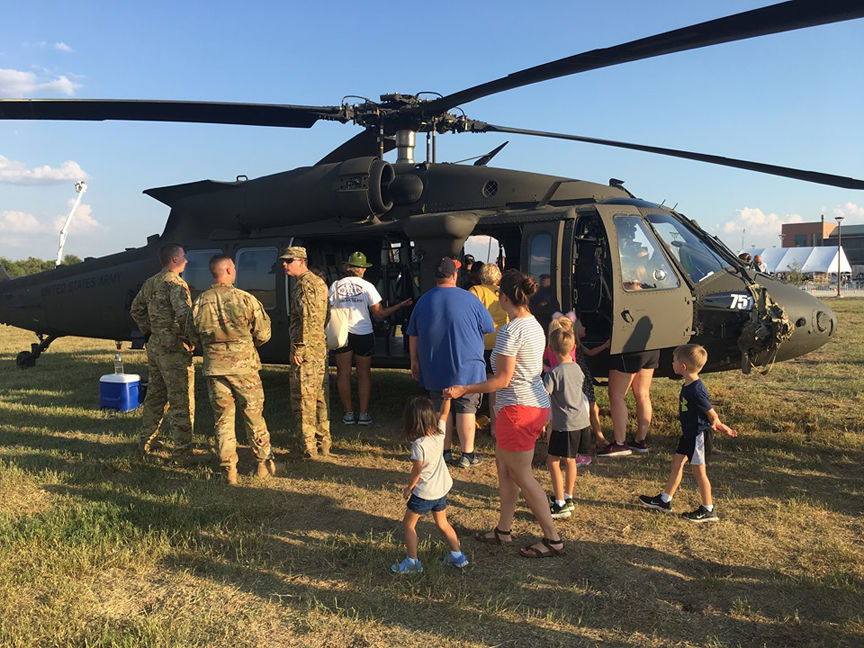 A UH-60 Black Hawk and its crew of four Austin-based Army National Guardsmen were on hand for Saturday’s RELLIS Campus open house. 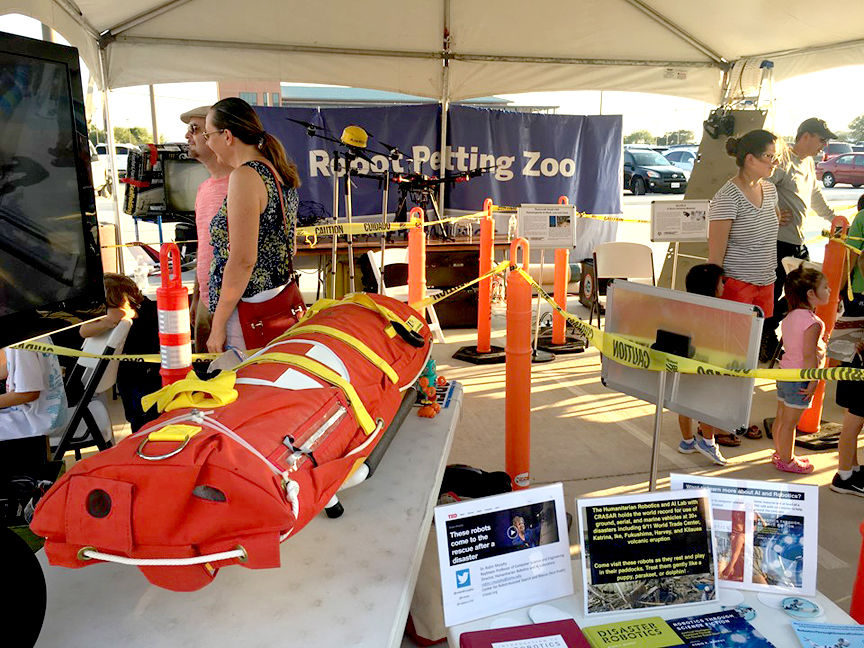 A UH-60 Black Hawk and its crew of four Austin-based Army National Guardsmen were on hand for Saturday’s RELLIS Campus open house.

Whether live animals and robot creations in a petting zoo, learning about the science of barbecue, watching drones fly or exploring a UH-60 Black Hawk helicopter, there was something for everyone in the crowd of thousands Saturday at the RELLIS Campus’ first festival and open house.

More than 45 educational entities and other organizations provided interactive opportunities for both adults and children, introducing the public to the diverse studies available through the larger Texas A&M University System.

The RELLIS Campus has been rapidly expanding over the past several years, and in an effort to familiarize more people with the facilities, Texas A&M System Chancellor John Sharp elected to host an inaugural fair at one of RELLIS’ larger parking areas and surrounding fields. Visitors could touch both living animals and robots with a live petting zoo and “robot petting zoo,” orchestrated by Texas A&M’s Engineering Experiment Station, or TEES. Guests could meet police officers and firefighters and learn from Texas A&M AgriLife about gardening and the science behind the perfect barbecue.

Texas A&M System schools such as Tarleton State University set up in information booths, and when families weren’t occupied with interactive learning, they could enjoy live music, games, food and inflatables.

A team of instructors with the Texas A&M Engineering Extension Service (TEEX) Texas Forensic Science Academy awed spectators with a simple latent fingerprinting kit, demonstrating the technique crime scene investigators will use when dusting for fingerprints.

“We’ll take an index card and show the [child] what a latent print is by having them place their finger on the card,” explained TEEX instructor Michael Clark. “We’ll then tell them about how, at a crime scene, we can’t always see a fingerprint, and we’ll use the magnetic powder to show how it works, We show them that much is hidden, and that we have to use investigative techniques.”

The academy offers different programs worth hundreds of hours of curriculum for law enforcement officers and civilians alike, including one technical training program organized in cooperation with Blinn College. Clark said having a booth with a fingerprinting exercise at the festival not only drew in curious kids, but adults as well, including college students who showed interest in the academy.

“We’re trying to move these skill sets we teach law enforcement practitioners, and take them to college students wanting to get into this field,” he said.

Not far from the forensics booth, scientists with Texas A&M-Corpus Christi’s Lone Star UAS Center of Excellence & Innovation showed off 10 drones of varying sizes and modifications. The public could watch the drones fly over a field, and talk with experts about unmanned aerial systems.

“Our job is to help do research and development, and to test technologies that enable the safe integration of small UAS — or drones,” said Michael Sanders, LSUASC executive director.

The program assists the Federal Aviation Administration in developing traffic management systems so that both hobbyists’ drones and professionally dispatched drones can operate safely. Based out of Corpus Christi, LSUASC functions through work from university staff and students, as well as contractors.

Sanders said his colleagues and students were proud of their achievements, and enjoyed talking with curious visitors.

“Part of our job is to educate the public on how to operate small UAS safely, and on how they are being integrated into the national air space system,” Sanders said. “Obviously the education of students [is important], letting students be aware of the opportunities out there with UAS. We educate the public, yes, but we also show the young population some applications of sciences in the 21st century, which they may have not been aware of.”

The skies at RELLIS were also occupied by another aircraft — a UH-60 Black Hawk helicopter. The chopper’s crew of four Austin-based Army National Guardsmen allowed children to explore the interior of the large metal beast. Pilot 1st Lt. Jacob Henderson said their organization often works alongside Texas Task Force 1, one of the federal teams under the Federal Emergency Management Agency’s National Urban Search and Rescue System.

“We’re just here for folks to answer questions about the aircraft,” he said, noting that he and his crew members love talking about the helicopter. “... It lights up all the kids’ faces to see inside, with all the buttons, and it’s good for us to teach others about it. It helps us refresh on our own knowledge.”

RELLIS Campus Manager of Enrollment Services Daneetra Walker said the first campus festival appeared to be a success, with thousands estimated in attendance.

“This is an opportunity for us to introduce ourselves to the Bryan-College Station community,” Walker said. “... We wanted to put RELLIS on the map. For so long, people have driven by our campus on their way to Caldwell or Austin. Now they have the chance to experience it for themselves.”

The Texas A&M University System’s RELLIS Campus has changed dramatically since May 2, 20…