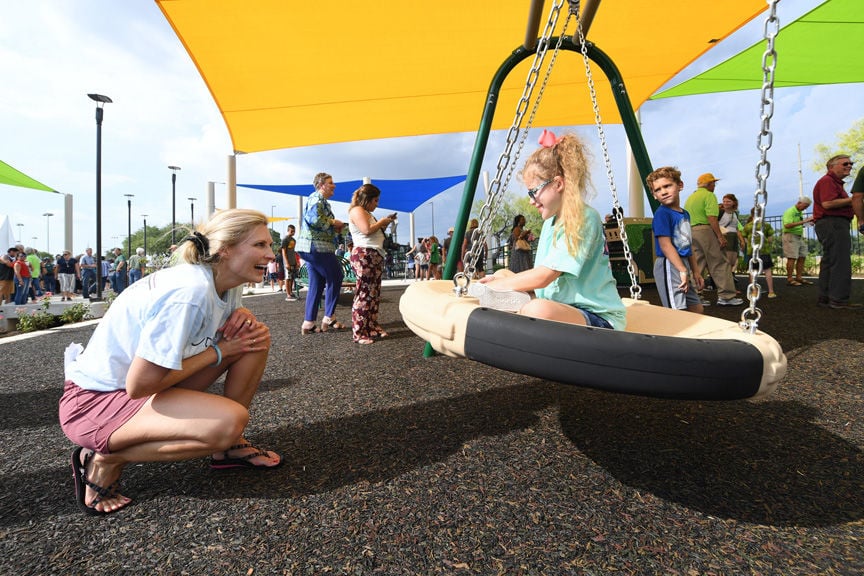 Stacey English watches as her 9-year-old daughter, Addison, who has Mowat-Wilson syndrome, swings at the Fun for All Playground following Friday's ribbon cutting celebrating the completion of phase one at the park.

You can read more about the Fun For All Playground here and view more photos from the ribbon cutting here. 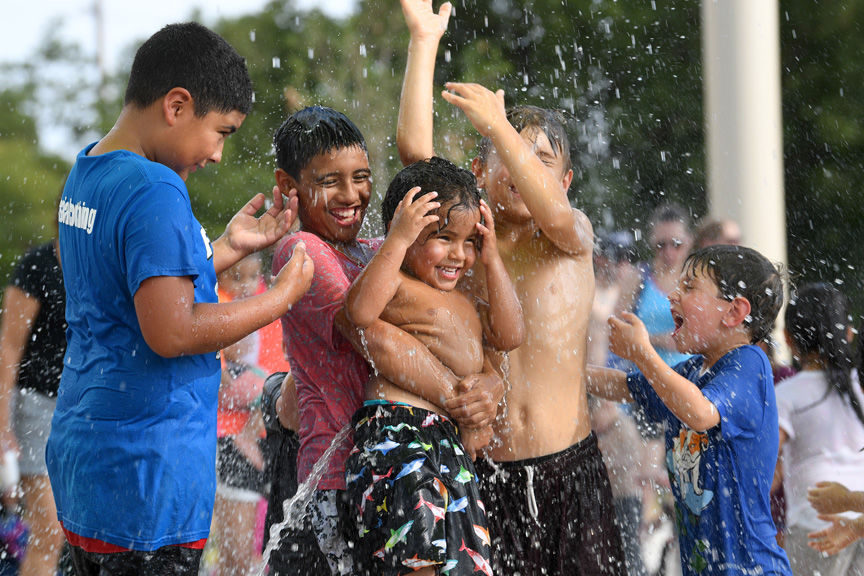 Children play on the splash pad on Friday while celebrating the grand opening of the Fun for All Playground in College Station. 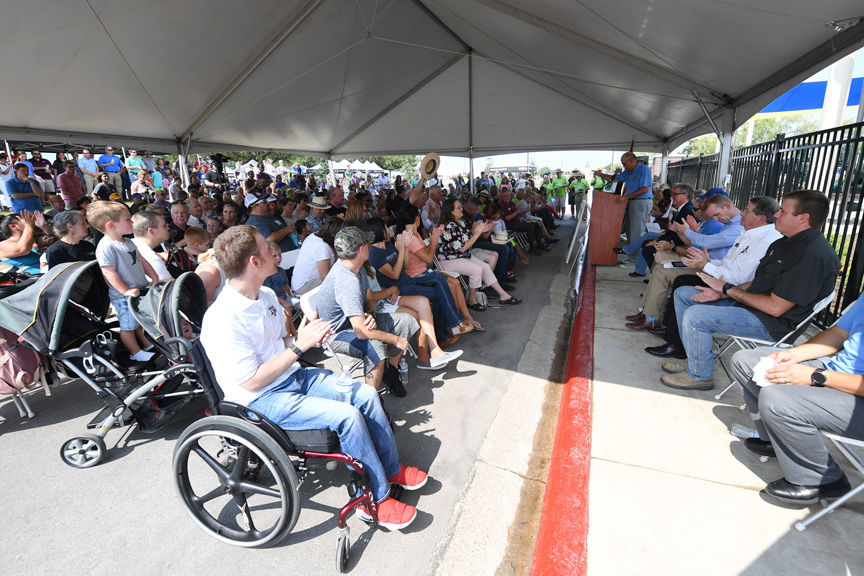 Attendees gather under a tent near the Fun for All Playground to celebrate the grand opening of phase one of the park on Friday.

Stacey English watches as her 9-year-old daughter, Addison, who has Mowat-Wilson syndrome, swings at the Fun for All Playground following Friday's ribbon cutting celebrating the completion of phase one at the park.

You can read more about the Fun For All Playground here and view more photos from the ribbon cutting here.

Children play on the splash pad on Friday while celebrating the grand opening of the Fun for All Playground in College Station.

Attendees gather under a tent near the Fun for All Playground to celebrate the grand opening of phase one of the park on Friday.

After more than five years of talking about the Fun for All Playground, children and adults of all ages and abilities got to play on the new swing sets, slides and splash pad at Stephen C. Beachy Central Park during Friday’s grand opening.

The equipment set up at the corner of Central Park Lane and the Texas 6 service road includes wider slides, a four-seat teeter-totter and accessible swings, all set up on spongy ground covering.

Lisa Aldrich, Fun for All project spokeswoman, said she is grateful the opening of the first phase has allowed people to see what until Friday had just been talk.

“All of us in some way can be involved and help with this, because we all know someone — whether in our family or someone we know — that has a special need, all ages,” she said.

The playground was constructed by Caprock Construction and was designed to allow anyone, whether they have special needs or not, to play freely in a safe environment.

“It’s almost indescribable, really,” Stacey English said as she pushed her daughter on a saucerlike swing. “Words are hard to find because it’s just so heartfelt.”

What it comes down to, she said, is Addison loves to play with other people and adults and just wants to be like everyone else.

“It’s just amazing, because you want all kids to be together and participate,” English said.

Addison’s home-health nurse, Jocelin Alfaro, said the playground gives her a place to take Addison where the girl can feel comfortable and can do everything available.

“I like the fact that they added normality to it, so she can also interact with other kids,” Alfaro said.

With the first phase of the playground open, the second phase will get underway soon as the steering committee continues funding the third and fourth phases. The Fun for All Playground will be open year-round from 6 a.m. to midnight. The splash pad will be operational from 8 a.m. to 9 p.m. and will be open until Oct. 31.

Work on the newly opened playground began in 2014 when the College Station City Council voted to support its creation.

It was created thanks to donations — large and small — from individuals, families, businesses and organizations throughout the community, Fun for All Playground steering community member and ribbon-cutting emcee Tom Turbiville said.

Though there are a lot of people to thank for the completion of Phase I of the $3.5 million project, the biggest thanks and applause needs to go to the community as a whole, he said.

Dawn McKeag, a 1999 graduate of Texas A&M, and her family visited the playground while in town for Texas A&M men’s basketball coach Buzz Williams’ Buzz’s Bunch, a basketball camp for children with special needs.

“It’s awesome,” McKeag said about the playground. “I wish there was more things like this elsewhere, but it makes me even more proud to be an Aggie.”

The playground represents a place where McKeag’s son Fin — who has cerebral palsy — and his twin sister, Brenna, can play together.

Visiting College Station from Dripping Springs, she said they do not have an accessible playground in their community. The closest is Morgan’s Wonderland in San Antonio.

College Station’s new accessible playground lets Fin play with other children without any limitations caused by his wheelchair, she said.

“My kids can play together,” she said. “There’s no barriers for him, and he can get up, and they can play hide and seek, running around and he can roll around.”

Photos from the grand opening celebration and ribbon cutting ceremony for the Fun for All Playground on Friday, Aug. 2, 2019.

An inclusive playground for children of all abilities at College Station's Stephen C. Beachy…

Fun for All Playground at Central Parks wins competition

Fun For All Playground receives $15K donation from Santa's Wonderland

Santa’s Wonderland made a $15,000 donation toward the continued construction of the Fun For All Playground at Stephen C. Beachy Central Park i…