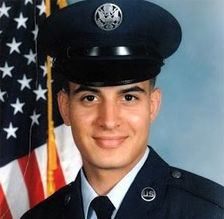 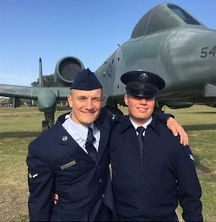 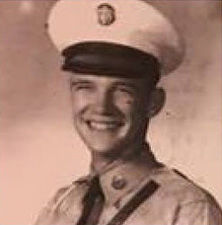 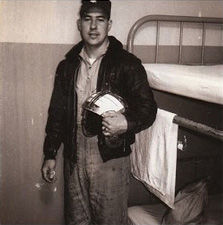 For three generations of Romeros, military service is a family thing.

John Romero, who works at Texas A&M Engineering Extension Service and the Cyber Readiness Center, said his father and father-in-law served, and his two eldest sons work as crew chiefs for the U.S. Air Force after being raised in the Brazos Valley.

"We all did it to better ourselves and be part of something bigger than us. That's exactly what the Air Force provided for me," Romero said.

Romero enlisted in November 1985, just after turning 17, and served seven years in the Air Force, achieving the rank of staff sergeant. His father, C.J. Romero, served in the Navy for three years in the 1960s as an aviator sub detector. The elder Romero met Gail, the woman who would become John's mother, on a train back to San Diego, where he was stationed.

John Romero said that for his family, military service has represented not just duty, but an opportunity to earn an education.

C.J. Romero eventually received a chemical engineering degree from what is now the University of Louisiana at Lafayette. John said he was 8 years old when his father graduated, and he remembers the graduation ceremony.

"I told him, 'Dad, you did great. I'm really proud of you," John Romero said.

Romero's family moved "up and down the Gulf Coast," according to John, and found their way to the Corpus Christi area by John's teenage years. An Air Force recruiter came by the house, and John asked him about a path in robotics. "He said, well, we have hydraulics," Romero said.

After high school graduation, basic training and extended electronic technical training, John Romero worked in electronic warfare. He worked with B-52 bombers' jamming equipment, he said. His time in the service ended just after the Berlin Wall fell in 1989. "I could have enlisted for four more years, but I knew I was ready to go to college," he said.

John said that war seemed a bit remote for him during his military service. "For the most part, we don't fight," he said of enlisted Air Force service members. "It's the officers who are out there putting their lives on the line. So when they come back, we'd salute them, say 'How you doing, ma'am, how you doing, sir,' so you don't really think about war when stationed stateside," he said.

Romero was last stationed in Minot, North Dakota. While there, he met Karin Haglund, and they married in 1990. Karin's father, Bob Haglund, was a military policeman with the U.S. Army for four years. He was stationed in France in the late 1970s.

A circuitous post-service academic path brought them to College Station by the mid 1990s. John and Karin had three boys, the elder two of whom, Ross and Ryan, are stationed in Missouri and Nevada, respectively.

"I thought about and wanted to serve all through childhood," Ryan Romero said via phone from Nellis Air Force Base, which is near Las Vegas. Ryan, 19, said his dad talked about the positive influence military service had in his life. Like his dad, Ryan met with a recruiter at the tail end of his time in high school, and decided to follow in his father's-- and grandfathers' -- footsteps.

"I've always been excited for opportunities to better myself. This seemed like a wonderful opportunity to better myself and be part of something bigger than myself," Ryan said. Ryan, like his older brother, graduated from A&M Consolidated High School. The youngest Romero son, Rhett, is in high school.

Ryan said he signed up to join the Air Force officially on July 5, 2017, and that his last trip home to the Brazos Valley came in December. His parents have flown from Texas to Nevada to see him, and his brother Ross gets to see each him a bit more frequently, he said. His role as a crew chief, he said, is to manage day-to-day operations and ensure that planes under his supervision remain ready to fly.

"Between my grandfather and my dad and my brother, It felt like a legacy, a duty to serve," Ryan said. "I was and am excited about it for the years to come."