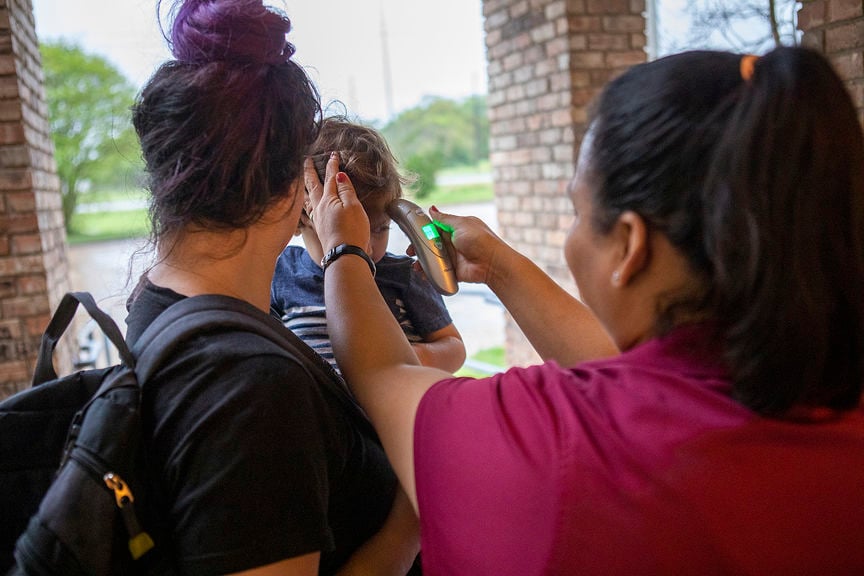 Assistant Director Maria Medina checks the temperature of Noah Applewhite, 2, as he is held by Darian Soares at Peas in a Pod Learning Center in College Station on Friday, March 20, 2020. 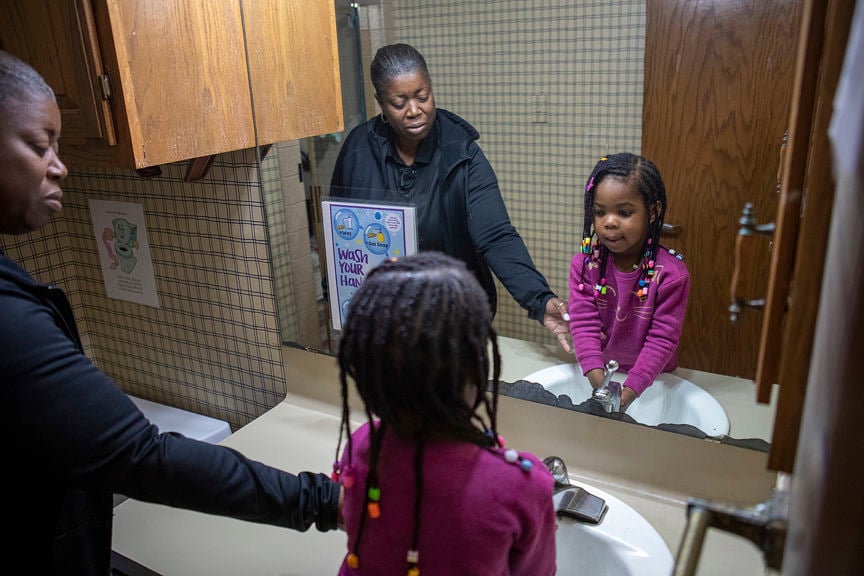 Assistant Director Maria Medina checks the temperature of Noah Applewhite, 2, as he is held by Darian Soares at Peas in a Pod Learning Center in College Station on Friday, March 20, 2020.

As concerns over COVID-19 continue, day care and child care centers throughout the state, including in Bryan-College Station, have implemented new protocols to make sure children are staying safe.

The state’s almost 17,000 licensed child care facilities were not included in Gov. Greg Abbott’s executive order calling for all schools to temporarily close. According to the Texas Health and Human Services website, the executive order does not apply to child care centers, group day care homes and family homes.

While they are still operational, all child care facilities are required to adopt added precautions, including taking children’s temperatures and making sure everyone washes their hands more often.

Anyone who has a temperature of 100.4 degrees Fahrenheit or above, shows signs or symptoms of a respiratory infection, has traveled internationally in the past 14 days or has had contact with someone suspected or confirmed to have COVID-19 or a respiratory illness may not enter the building.

The new guidance also notes children must be picked up and dropped off outside the facility, rather than allowing parents to walk their child to their class. Only parents with a “legitimate need” may be granted entry into the facility.

Some facilities are only open to long-term families, while others have said they can take children on a temporary basis while schools are closed.

Peas in a Pod Learning Center in College Station is set up to care for children from infants to preschool. Owner and director Stephanie Shoemake said the facility has been operating at about half-capacity, so there are some classes that have space for children on a temporary basis if needed.

Shoemake said in light of COVID-19, she and her staff have started sanitizing and disinfecting surfaces and toys double and triple what they used to throughout the day. This includes doorknobs, seats, table surfaces and toys, as well as cleaning baseboards and walls.

She noted the students also have been spending more time outside in the sun on nice days.

“There’s a lot of hand washing going on right now,” she said.

For more information about Peas in a Pod Learning Center, go to peasinapodbcs.com or contact the facility at 703-1816. For after-hours help, contact Shoemake at 204-6113.

Megan Van Dyck, owner of Kiddie Academy of Bryan, said her facility is still operating and accepting applications, noting there are a limited number of spots for kindergarten through fourth grade on a temporary basis.

Kiddie Academy cares for children as young as 6 weeks old, but they are in their own rooms separate from the school-age children, Van Dyck said.

The College Station Kiddie Academy location is not accepting new children on a temporary basis, Van Dyck said, but she wanted to help ease parents’ minds as they try to find solutions while the schools are closed.

“We want to help the community,” she said.

For more information about Kiddie Academy of Bryan, go to kiddieacademy.com/academies/bryan or contact them at 776-5771.

The facility set its temperature threshold at 100 degrees Fahrenheit to allow children to enter the building. If a child has a temperature higher than 100 degrees, supervisor Chelsea Wingate said, they are not allowed in the building and may not return for 48 hours.

For more information about Aggieland Preschool, go to aggielandpreschoolacademy.com or call 704-5035.

Texas Elite Learning Center is also accepting children on a temporary basis, but parents should call 485-2872 to find out if space is available.

In addition to following the protocols from Health and Human Services, anyone with a temperature of 100.4 degrees or above will not be allowed to return until they have a doctor’s note.

Even though Texas A&M has moved its curriculum online, the Becky Gates Children’s Center is still open, but it is limited to children from 1-6 years old whose parents are connected to Texas A&M as an employee or student.

Other facilities in town, such as Kiddie Castle Children’s Center and Bright Beginnings Pre-School, are open as well but are not accepting new students on a temporary basis.

Play outside, officials say, but be aware of sanitation limitations at parks

Ten area schools and districts announced Wednesday they will continue to be closed into April.

Brazos County health officials reported four new cases of coronavirus on Saturday, bringing the number of confirmed cases in the county to 10.