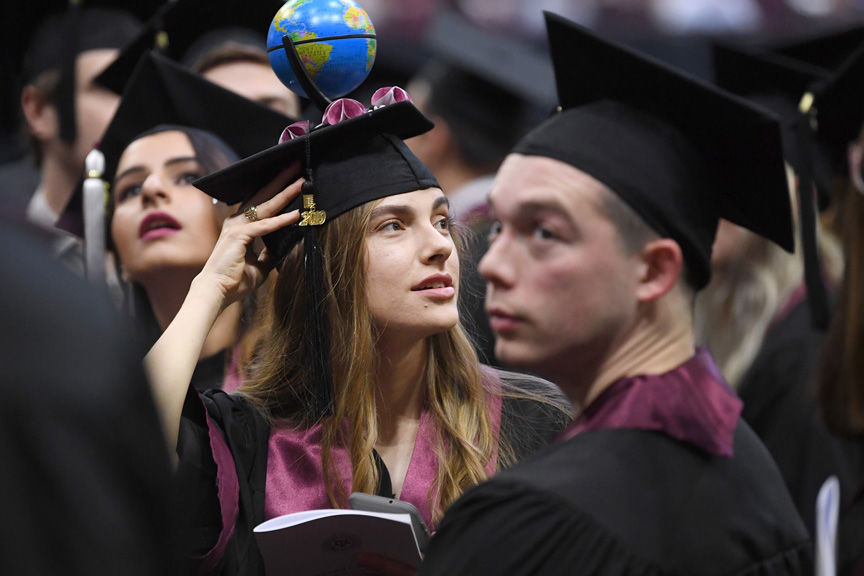 Hannah Lovato holds on to her decorated cap as she and other soon-to-be graduates of Texas A&M look around Reed Arena as they take their seats for the afternoon commencement ceremony on Friday. 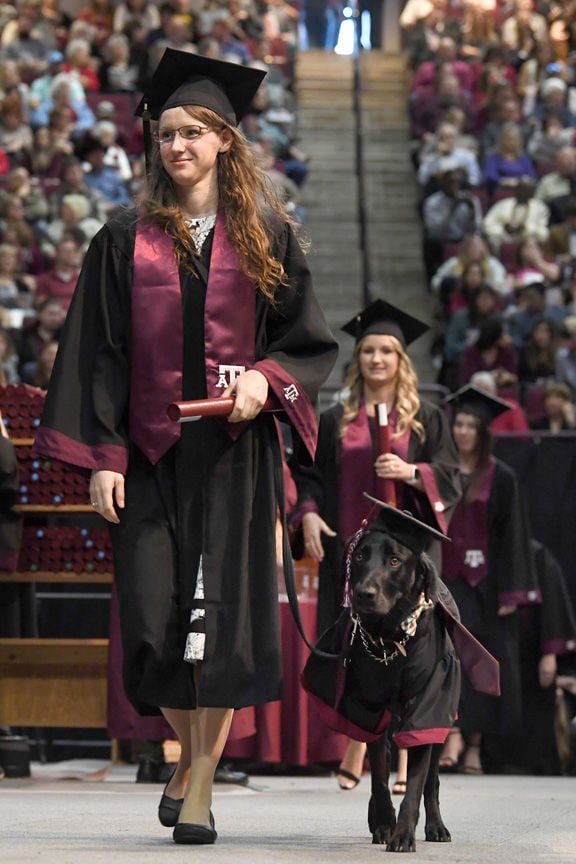 Julia Leise crosses the stage with her dog, Jazz, as she graduates with a degree in animal science from Texas A&M during Friday's afternoon commencement ceremony at Reed Arena. 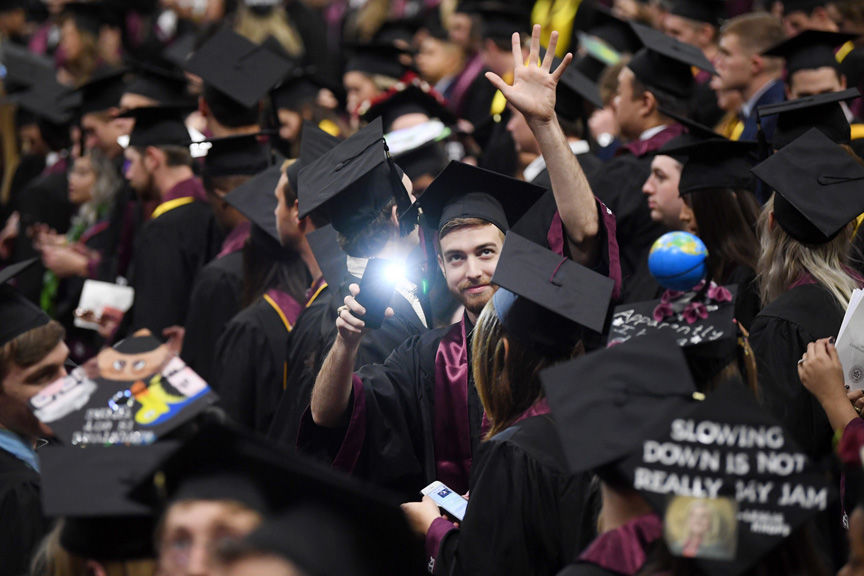 By using a cell phone light, a soon-to-be graduate of Texas A&M is easily spotted in the crowd at Reed Arena as he waves to supporters during the processional at Friday's afternoon commencement ceremony. 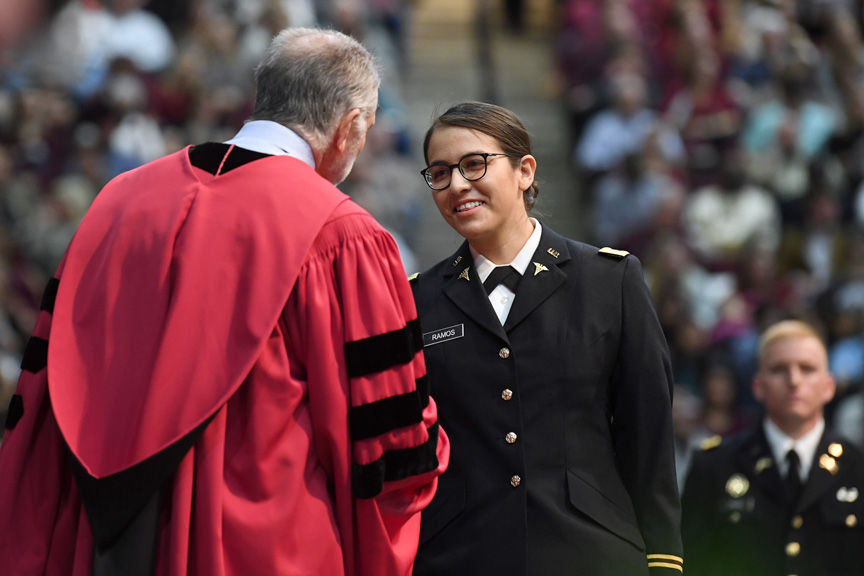 Hannah Lovato holds on to her decorated cap as she and other soon-to-be graduates of Texas A&M look around Reed Arena as they take their seats for the afternoon commencement ceremony on Friday.

Julia Leise crosses the stage with her dog, Jazz, as she graduates with a degree in animal science from Texas A&M during Friday's afternoon commencement ceremony at Reed Arena.

By using a cell phone light, a soon-to-be graduate of Texas A&M is easily spotted in the crowd at Reed Arena as he waves to supporters during the processional at Friday's afternoon commencement ceremony.

This week, more than 5,000 students are joining Texas A&M’s Association of Former Students as they graduate with their bachelor’s, master’s or doctoral degrees.

Leise is deaf and uses hearing aids and Signed Exact English — instead of American Sign Language — to communicate.

Leise’s dad, Tom, said Jazz helps his daughter be independent on campus because he can alert her to her surroundings and help her feel safe.

It means a lot to receive her bachelor’s degree after about six and a half years at the university, Leise said.

“I don’t know how to describe it, but it’s one of those moments that I’m going to remember for the rest of my life,” she said.

Now, she said she has her sights set on a master’s degree.

which opened in 2017. Valeria Quintanilla and Michelle Vargas, who received degrees in public health, were recognized at the start of the ceremony.

While some students were the first in their families to graduate from A&M, Scott Schautschick, who graduated Friday with a master’s in geosciences, continued his own Aggie tradition that began in 1996 when he earned his bachelor’s degree in geography. And since that first A&M graduation in ’96, he has had a goal of getting his master’s.

“I put it off for 10, 15 years, so then I decided to go back and get it, worked full time, full-time dad and full-time student for my masters’,” he said. “It’s been a great experience.”

Maj. Thomas G. Pledger, who received his master’s in public service and administration Friday afternoon, challenged his fellow graduates to find a problem in the world and try to go out and find a solution.

“Those graduating in this ceremony today total 1,068 individuals. If each of us works to solve one problem, the world becomes that much better,” he said. “It does not matter how big or small that problem you are solving. It only matters that you are working toward a solution.”

Pledger told the thousands in Reed Arena that his story with A&M began almost 25 years ago when he first applied to the university to pursue his bachelor’s degree.

However, instead of the large envelope telling him he was going to be an Aggie, he received a small envelope saying he had not been accepted.

He went on to join the U.S. Army, serving in multiple deployments, met and married his wife and now has three children who are all future Aggies.

Nearly 20 years later, he applied to the university again to go after his master’s through the Bush School of Government and Public Service.

“Once again, I waited expectantly. This time the story was different. I was accepted,” he said.

As part of the Texas A&M story that includes more than 500,000 former students, Pledger said, each graduate has the Aggie community to support them in addition to the family and friends who helped get them to graduation.

“The future lay before us; the pages unwritten, full of complex problems. Make your story and the story of Texas A&M amazing,” he said.

In addition to those who received their diplomas during Friday afternoon’s graduation, 54 students were commissioned as officers in their respective branch of the United States military.

Brig. Gen. Joe E. Ramirez, commandant of the Corps of Cadets, noted the commissioning ceremony continues a “time-honored tradition” that has been part of the university for 143 years.

From military service to technology companies, Texas A&M University President Michael K. Young said, Aggies go on to make an impact on their communities and the world.

A&M commencement ceremonies do not include guest speakers on purpose, he said.

“We don’t think you need any other advice than simply telling you to go out and do what you have done while you’ve been here at Texas A&M University, and we know we will look back 10 years, 20 years, 50 years from now as proud of you as we have ever been of any Aggies who have walked across this campus,” he said.