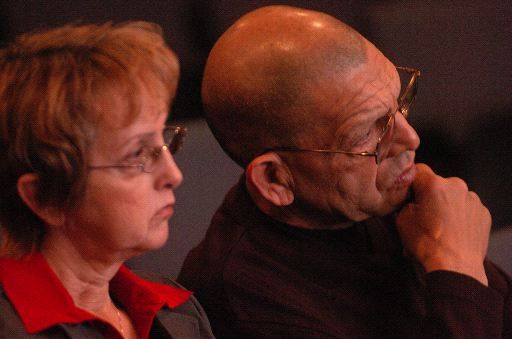 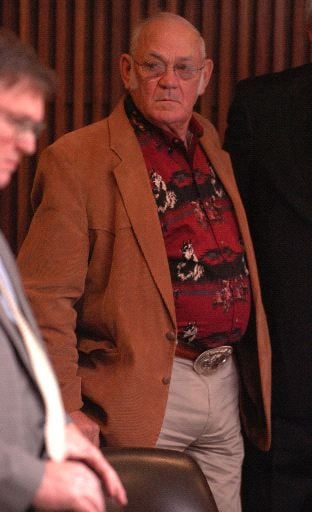 Willie Davis, who is on trial for the murder of Tommy Andrade, scans the courtroom just after entering Judge J.D. Langley's court Tuesday.

Willie Davis, who is on trial for the murder of Tommy Andrade, scans the courtroom just after entering Judge J.D. Langley's court Tuesday.

Returning to the courtroom where his sons were handed lengthy prison terms one year earlier, 67-year-old Willie Davis proclaimed his innocence Tuesday in helping to plan the deadly shooting of rap producer Tommy Andrade.

Moments later, prosecutors began presenting evidence in his capital murder trial - describing the bloody and bungled August 2003 raid on Andrade's south Brazos County mobile home as a Davis family affair though none of the family members ever entered the residence.

For the first time, the District Attorney's Office said publicly that the Davis family patriarch had a significant role in planning the attack and in the interstate drug-trafficking enterprise that investigators have attributed to his sons.

"Willie Davis is off to the side, in the wings," Assistant District Attorney Brian Baker told jurors during the prosecution's opening statement, referring repeatedly to what he termed the "Davis conspiracy."

"Mr. Davis is the finance man in the entire [drug-smuggling] operation," he said. "He was a counselor. He was an adviser."

Andrade has been described by law enforcement officials as a small-time cocaine dealer who garnered the ire of brothers Chad and Trey Davis when he stole $100,000 in either drugs or money from them during a deal gone bad in Houston. He was 29 when officers found his lifeless body splayed across the floor of his disheveled bedroom, his face and chest covered in blood due to a single gunshot wound to his chest.

The gruesome scene was created, prosecutors have said, by three henchmen who were recruited through the Davis family's drug-trafficking ties in Atlanta and picked up by the Davis brothers at a Houston airport.

According to authorities, the out-of-town enforcers spent days planning the attack with the brothers while staying inside Willie Davis' $150,000 "celebrity-style tour bus." They were given weapons by the Davis brothers and they were driven to the Oak Creek mobile home community just south of the College Station border to conduct surveillance on Andrade's home, prosecutors have said.

"We do not have direct evidence of Willie Davis talking to the group from Georgia," conceded Baker, who is trying the case alongside District Attorney Bill Turner. "That's because Willie Davis was smart. He did his talking through his partners. But you will hear that Willie was there, always in the wings."

The confrontation at Andrade's home in the early hours of Aug. 7, 2003, also resulted in the death of gunman Jesse Mancuso, who was found by authorities dressed all in black in Andrade's driveway, in a kneeling position with his head pressed to the pavement in a pool of blood.

According to testimony during Chad Davis' December 2005 capital murder trial, the two other Atlanta-area gunmen also were wounded during the confrontation after Andrade dived for a gun under his mattress. They fled the scene hastily, both bleeding heavily and thinking they might soon succumb to the wounds, one of the men previously testified.

Soon after the shooting, prosecutors have alleged, Willie Davis picked the wounded enforcers up in his tour bus and drove them back to Georgia, where they would later meet an off-duty nurse at a hotel. He was initially charged with tampering with evidence, a third-degree felony that would have carried a maximum sentence of 10 years.

Prosecutors have said they aren't pursuing the death penalty against the elder Davis, so if found guilty of the capital murder charge he will automatically receive a life sentence.

Willie Davis is one of seven people who have been indicted in connection with Andrade's death.

His older son - 31-year-old Chad Davis, who was described by prosecutors in 2005 as the leader of the drug ring - was sentenced by a jury to life in prison at the conclusion of his capital murder trial. He will have to serve 40 years before he is eligible for parole, as will his father if convicted.

Three months later, younger brother Trey Davis, 25, entered a plea agreement with prosecutors and was given two consecutive 20-year sentences for burglary and robbery. The next day, 29-year-old Atlanta resident Thomas Parent - described by prosecutors as a lieutenant in the Davis family drug organization who helped recruit the gunmen - entered a similar agreement. He was given 35 years in consecutive sentences for burglary and engaging in organized criminal activity.

The state's star witness during the Chad Davis murder trial, confessed enforcer Bradley Padrick, had also received two concurrent sentences of 20 years as part of a plea agreement in which he agreed to testify in future trials. The 27-year-old was recently brought back to the Brazos County Jail, where he is waiting for prosecutors to call on him to testify again for the current murder trial.

The only alleged coconspirator who hasn't yet had his day in court is Boris "Short Fat" Mogilevich, who was apprehended in Europe in December after eluding authorities for more than three years. Mogilevich, 28, has been described by Padrick as the one who fired the fatal shot into Andrade's chest.

Wearing a western-syle shirt and blazer, the balding, gray-haired defendant sat Tuesday to the side of his defense team - three lawyers, including former district attorneys in Brazos and Walker counties. Huntsville-based attorney Frank Blazek and Bryan attorney Billy Carter traded off questioning witnesses.

Defense attorneys have opted to postpone giving an opening statement until it is their turn to begin presenting evidence, after prosecutors have rested their case. They also declined to immediately cross-examine all witnesses who did not travel to the courtroom from out of town.

Willie Davis' only words Tuesday were to pronounce, "Not guilty, your honor," at the beginning of the hearing.

To obtain a conviction of capital murder, prosecutors have to prove that Willie Davis helped his sons plan the attack on Andrade. They did not have to intend to kill the rival dealer - only to commit another felony such as burglary of his home or robbery, knowing that it could end in violence.

Prosecutors described Willie Davis during their opening statement as using his advanced age to smuggle large shipments of drugs for the operation without generating suspicion from authorities.

"What better cover than Willie Davis driving a big bus or driving a fishing boat?" Baker asked, describing him as also in charge of laundering the organization's money and managing the "communications network" - cell phones signed up in the names of Davis family friends.

So far, all of the witnesses called by prosecutors have been the same as those called during Chad Davis' capital murder trial and have given the same testimony.

As was the case on the first day of Chad Davis' trial one year ago, the most compelling witness called to the stand Tuesday was Tara Diamond - a 22-year-old Winnipeg, Canada, resident who said she was lying beside Andrade when she woke up to find three armed strangers standing in the dark around his bed, illuminated only by the light of the TV.

She had flown into Houston to meet Andrade - an Internet friend of the past four years - for the first time less than 12 hours earlier, she said.

"They said, 'Where's your money, dog?'" Diamond testified, explaining that the gunmen then ordered Andrade to put his shoes on because he was "coming for a ride."

Diamond said she held a pillow to her face most of the time and didn't see what happened next, but the gunmen's voices seemed to get louder shortly after they said she also had to put on her shoes.

Moments later a series of shots rang out, she said, and the room began to smell like gunpowder. When she emerged from the floor on the side of the bed, where she had rolled with the pillow still over her face, she said she found Andrade standing in the empty room with an expanding circle of blood soaking his white T-shirt.

He collapsed seconds later and she ran to a neighbor's house to call for help, she said.

She described Andrade as a rap producer and artist who went by the stage name Sheisty and had a small studio in his home. Jurors were shown photos of the music room, in which hung a poster of Al Pacino hoisting a machine gun in Scarface - a movie about a cocaine dealer who is shot to death by gunmen for a supplier he double-crossed.

On another wall hung a promotional poster for Andrade's Off the Chain record label, featuring him wearing a large necklace prosecutors have valued at $10,000. The gunmen also were demanding that item during the confrontation, the woman said.

Prosecutors also called to the stand Tuesday multiple Brazos County sheriff's deputies, including lead investigator Fred Kindell, who described during 2 1/2 hours of testimony tracking down leads in Atlanta days after the shooting occurred. During the investigation, he worked with law enforcement agencies in three states, as well as the FBI, the Drug Enforcement Administration and Texas Rangers.

All investigators initially had to go on, he said, was a small slip of paper containing a phone number found in the slain Atlanta gunman's pocket. Although not registered in their name, the phone number was used by the Davis brothers, prosecutors have contended.

Kindell also described the initial focus of the investigation - that it might have been because of Andrade's rap industry ties. Investigators collected DNA samples from about a dozen people in the Houston hip hop scene, he said, before turning their focus to the slowly emerging details about a possible drug-trafficking enterprise.

Andrade's mother sat in the courtroom throughout the day, occasionally wiping tears from her eyes as prosecutors asked deputies to describe graphic crime-scene photos.

Prosecutors are expected to continue calling witnesses Wednesday when the trial resumes at 9 a.m. at the Brazos County Courthouse.