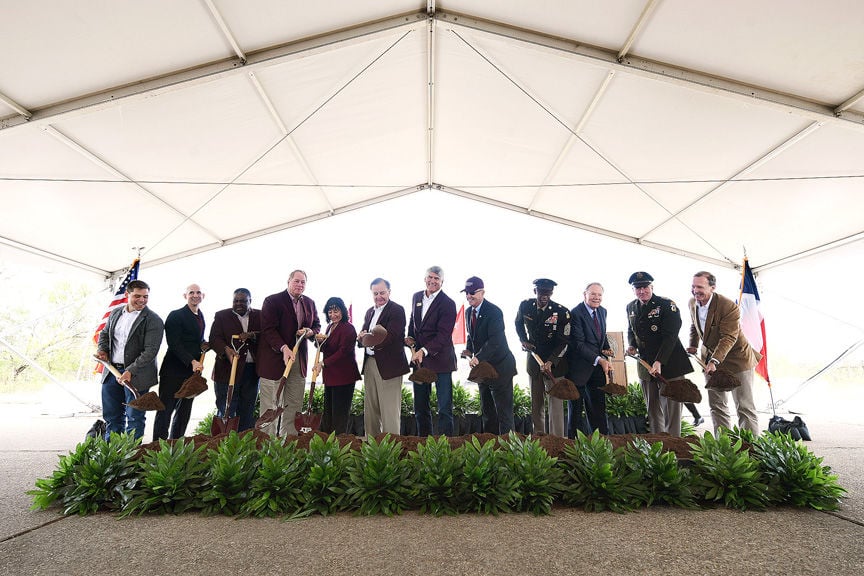 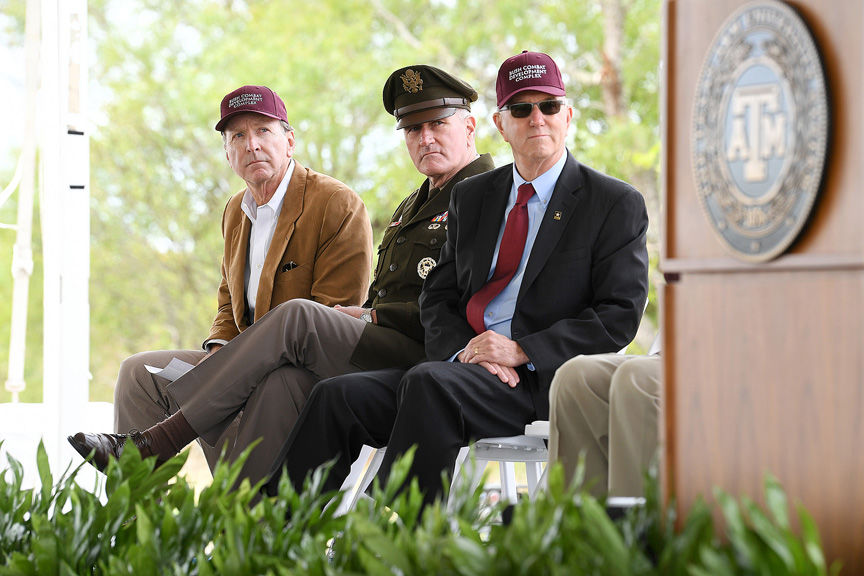 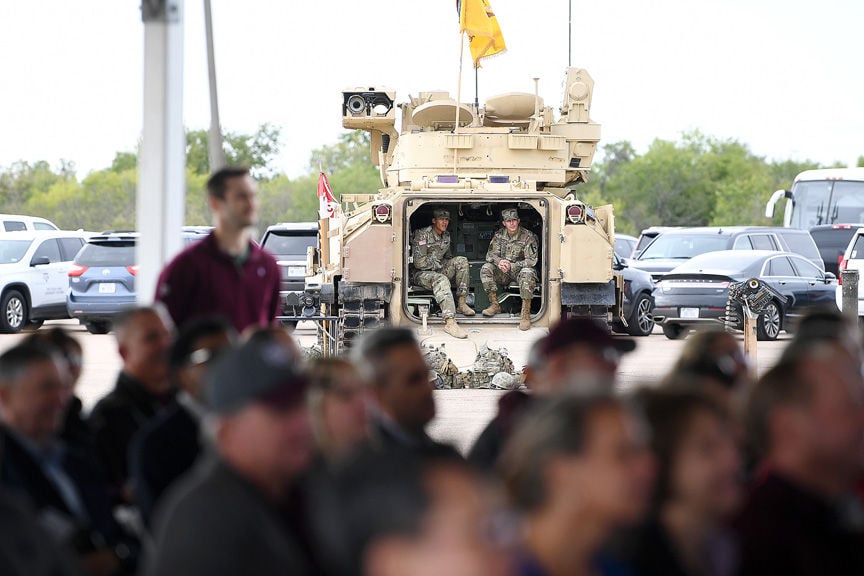 A military vehicle is parked Saturday near the tent at the Texas A&M System RELLIS Campus during a groundbreaking and naming ceremony for the Bush Combat Development Complex.

A military vehicle is parked Saturday near the tent at the Texas A&M System RELLIS Campus during a groundbreaking and naming ceremony for the Bush Combat Development Complex.

“It is a deep honor that this George H.W. Bush Combat Development Complex carries the name of a man who would be so proud of this honor and recognition,” Neil Bush said, holding back tears as he discussed his father.

“I think it’s important for two kinds of reasons that merge,” he said. “My dad had a great love for Texas A&M, as he selected Texas A&M as home for his library and museum in 1991, and for the Bush School of Government and Public Service. He chose it because, out of all the institutions in America, Texas A&M’s values align more closely with his own personal values; values of respect and honor, loyalty, patriotism, commitment and service. These are the kinds of deeply embedded values Texas A&M cares about, and kids are inculcated with. And those are the values my dad lived every single day of his life.”

Participants gathered beneath a large tent pitched over the asphalt where the planned $130 million Army research facility will one day stand on the western-most border of the RELLIS Campus. Two military vehicles and one helicopter staffed by uniformed soldiers were positioned close to the crowd, serving as representations of the current technological assets available to service members.

Texas A&M System Chancellor John Sharp welcomed the group, followed by short speeches from others, including Gen. John “Mike” Murray, commanding general of the U.S. Army Futures Command. Texas State Rep. Greg Bonnen spoke on behalf of the state legislature, which allotted $50 million toward the establishment of the complex in this year’s legislative session.

“As great a president as [George H.W. Bush] was, the memory of him [that] comes to my mind is that of the black and white footage of a pilot being lifted up out of a life raft, onto the deck of a submarine in September 1944,” Bonnen said. “You see this pilot walk across the deck towards the tower, and there’s a moment when he turns right into the camera and you see can see the face of a future president. When I remember that, I cannot help but think of how he answered this country’s call of duty, and was willing to put his life on line to protect and defend the United States of America. When I think of him, I think of the thousands of men and women following in his footsteps. They are putting their lives on line even today, as we speak, in defense of this country and freedom throughout the world. It is our commitment to see that these soldiers are the best equipped soldiers in the world.”

Neil Bush shared the sentiment of his father’s commitment to service.

“My dad also had a love for this nation,” he said. “His service to this nation is unparalleled. He was the youngest pilot in the Navy, and shot down in service. He kept active in service, flew 58 combat missions. He rose in his political service to become commander-in-chief, and he commanded the world’s greatest army and military force. ... He understood the importance of having a strong military, that it’s not to win wars, but to prevent wars from happening in the first place.

“And if there was ever a president who exercised the power of America in a benevolent, good, and forceful way that led to a more harmonious world, you couldn’t — it’s hard for me to think of one more successful than George H. W, Bush. He understood the importance of keeping the Army strong, and to think there is going to be a facility at Texas A&M that is going to be leading the Army in developing new, cutting-edge approaches to keeping the military the best on the face of the Earth, is something that’s just an amazing honor for the Bush family to be a part of.”

All in attendance for the ground breaking were given a baseball cap bearing the BCDC title, as well as a little something special in line with the late Bush’s style: a pair of colorful, quirky socks with military tanks and the facility’s new name stitched in white lettering.

A number of the program speakers overturned a plot of soil in ceremony, receiving a round of applause from an enthusiastic crowd of supporters cradling the colorful socks in the nooks of their arms.

The completion of the facility’s innovation proving ground and research innovation center are slated for summer 2021.

The complex is also is projected to hold a ballistic, aero-optics and materials area, and the technology innovation and modernization catalyst. At these four facets of the complex, researchers will one day test autonomous aircraft and both above ground and subterranean vehicles. They will study energy in laboratories, on runways, underground and across open-air battlefields, as well as scrutinize lasers and blast-resistant materials and manage intellectual property and technology.

Soldiers also will be able to test new technology on site at the campus.

For more information on the BCSC, visit www.tamus.edu.

As part of ongoing efforts to modernize its operations, tactics and technologies, the United…

As part of his visit to Aggieland, Army Secretary Mark T. Esper took questions from local me…