The College Station McDonald's being sued for negligence by the parents of two Blinn College students killed in February 2012 was notorious at the time for incidents of fighting and disorderly conduct that often ended with the police being called, according to evidence presented in court on Tuesday.

Several College Station police officers, including Assistant Police Chief Billy Couch, said in video depositions that it wasn't unusual for authorities to be called out to the fast-food restaurant off of University Drive for problems associated with crowds of hundreds of people gathered inside and outside the McDonald's.

Their testimony came during the first day of evidence in a civil suit filed by the parents of Lauren Bailey Crisp, 19, of Dripping Springs, and Denton Ward, 18, of Flower Mound, both of whom died after a car accident on Texas Avenue after leaving McDonald's around 2:15 a.m. Feb. 18, 2012.

Ward and Crisp, along with Tanner Giesen, 19, were being driven by Samantha Bean, 20, in Ward's vehicle. The group was attempting to get Ward to the hospital after he'd been severely beaten by a group of men at the McDonald's.

Ward's vehicle was struck by another vehicle when Bean ran a red light at Holleman Drive, and shortly afterward Crisp and Ward were pronounced dead.

Chris Hamilton, the plaintiffs' lead attorney out of Dallas, has insisted the deaths could have been avoided if McDonald's had taken reasonable safety measures to protect its patrons.

Specifically, he said, McDonald's should have had security officers, knowing that there was a pattern of fighting and other reports of disorderly conduct.

Onsite security would have prevented the altercation that led to Ward being severely beaten and resulted in his friends' attempting to get him to the hospital, Hamilton has argued.

McDonald's attorneys, led by Marshall Rosenberg, have said the fast-food restaurant shouldn't be held responsible for the decisions and actions of other people leading up to the death of two teenagers.

The majority of testimony heard by jurors came by video depositions, including that of Carlos Butler, who was general manager of the McDonald's at the time of the deaths.

While being questioned on camera, Butler told Hamilton he was unaware of any police calls made from the restaurant or any instances of police responding to an incident at the restaurant.

Hamilton went through a list of about 20 police incident reports filed between March 2011 and January 2012 by officers who responded to calls of fighting, assault or disorderly conduct inside and outside of the restaurant.

According to the police reports, all of the incidents responded to occurred between 2 a.m. and 4 a.m. on a Friday, Saturday or Sunday.

In several instances, the caller was a manager on duty, according to the reports.

Butler said he couldn't remember any of the documented police events or if he'd been informed about them.

As a local hip-hop artist, Butler said he often hosted parties with hundreds of guests and would hire one officer for every 100 people for security purposes.

It was not uncommon for hundreds of people to come to the McDonald's on the weekends between 2 a.m. and 4 a.m., he said, but he didn't see that as a security concern.

Butler acknowledged he knew other fast-food eateries, such as Whataburger, did hire security officers during the peak crowd hours.

In a video deposition, Lindsey Ives, the McDonald's manager working the night of the incident, denied knowledge of a 911 call in reference to fighting and a man with a gun shortly before the group in Ward's vehicle arrived.

However, Hamilton said, he was able to confirm Ives was the one who made the 911 call.

Two McDonald's corporate employees, a regional security manager and an area supervisor, also testified in video depositions that they'd never known the University Drive McDonald's to be a security concern prior to the incident and that they weren't aware of the police calls and reports. Hamilton said it's likely he'll rest his case at the end of the week, at which point the McDonald's attorneys will begin calling witnesses.

A key issue in the case will be whether Ward died as the result of his injuries suffered from the assault at McDonald's or from the car accident, a point both sides plan to call pathologists to testify about.

Parents of victims testify in suit against McDonald's

Stories from the McDonald's trial after death of two Blinn students

So basically two people died in a car accident in which their driver was at fault due to running a red light and McDonald's is the one getting sued...?

What stands out to me in this article is the blatant lies being told by the McDonald's managers. If anything points to that establishment's culpability in this tragedy, it's that. Yes, the underage drinking was a contributing factor But I think McDonald's had an ongoing volatile situation and did little to try to stop it, probably for financial reasons.

I can see somewhat of a case against McDonald's and their lack of planning for these peak, post-bar closing hours on the weekends when they know it's crowded and there are fights etc (whether or not they admit to them). It would probably be a good idea for their sake, especially for liability, to have a security officer or two to work these hours. However - that it a separate issue.

The real problem is that these kids thought it would be OK to go to a public place and drink under age, and then to drive themselves without plans for a DD. This is where they went wrong. McDonald's didn't make that poor decision for them.

I will say, though, that Harry's should see some repercussion to serving minors...

Couldn't they have made it to St Joseph quicker??? Just sayin[huh]. Hard to believe you make it from University to Holleman then finally have and wreck, then its the restaurants fault. Give me a break 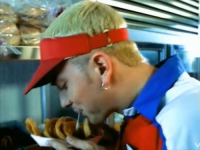 And since they were Blinn students, you would think they would have noticed the hospital across the street from school. But obviously there was a track record of bad choices...

Well, McDonald's did pay out to some idiot who spilled the hot coffee on herself. Why not to those parents, whose children went there out of their own volition?

"What a tangled web we weave when at first we try to deceive".