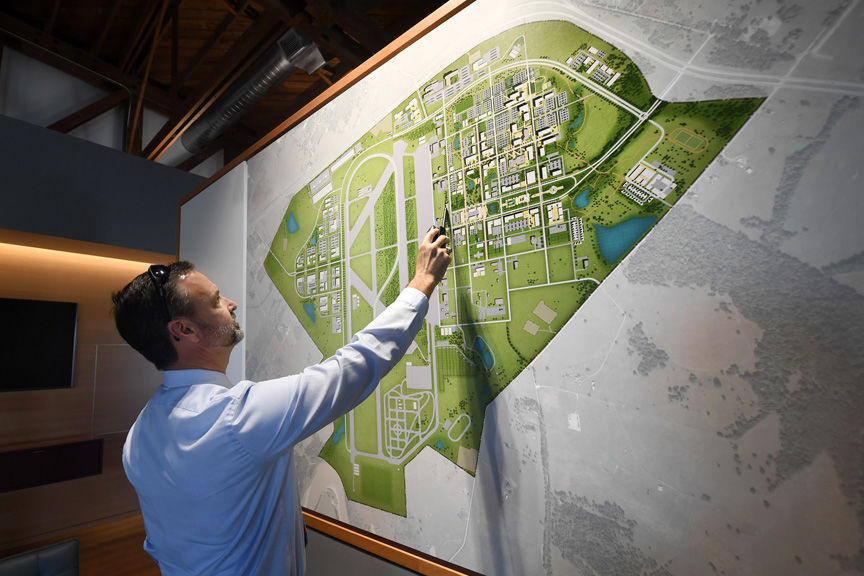 You can read more about the showcase here. 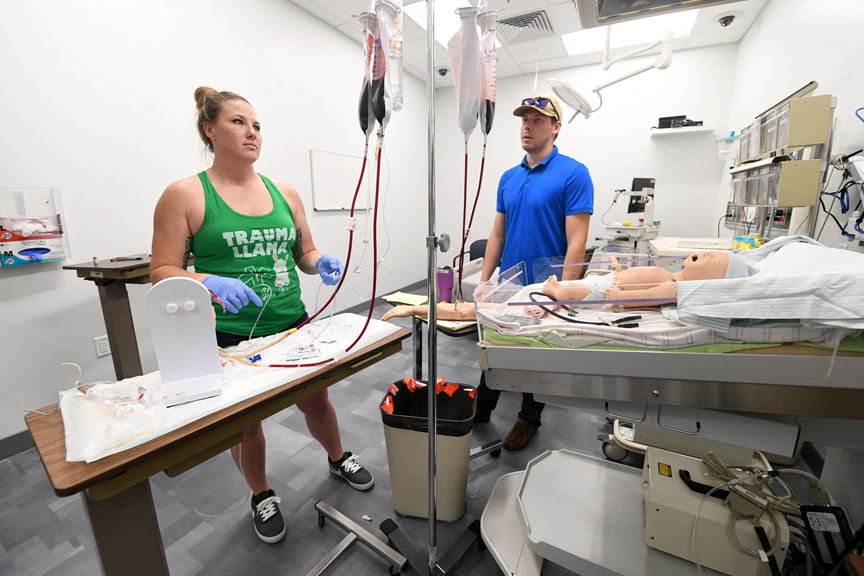 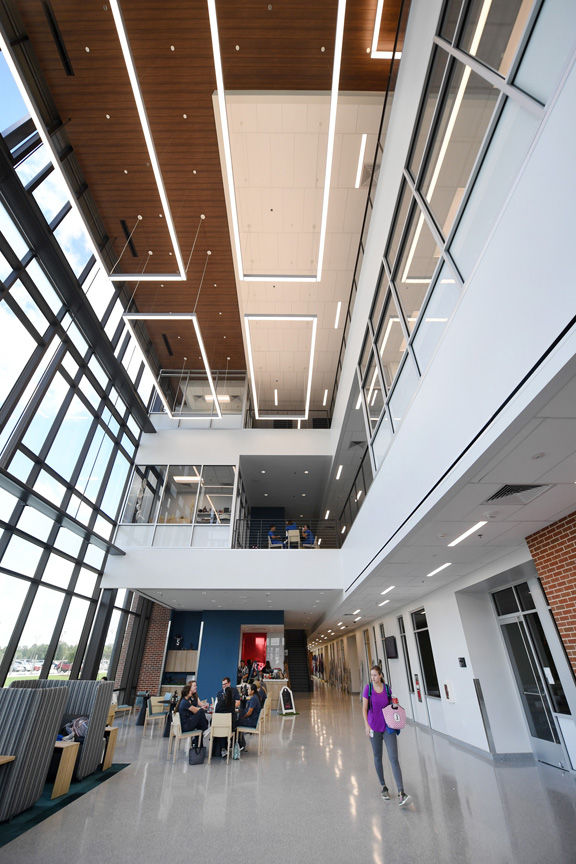 Daylight from floor-to-ceiling windows illuminates the lobby of the Academic Complex Building 1 at Texas A&M University System's RELLIS Campus on Thursday. The campus is hosting a festival and open house on Saturday, Oct. 5. 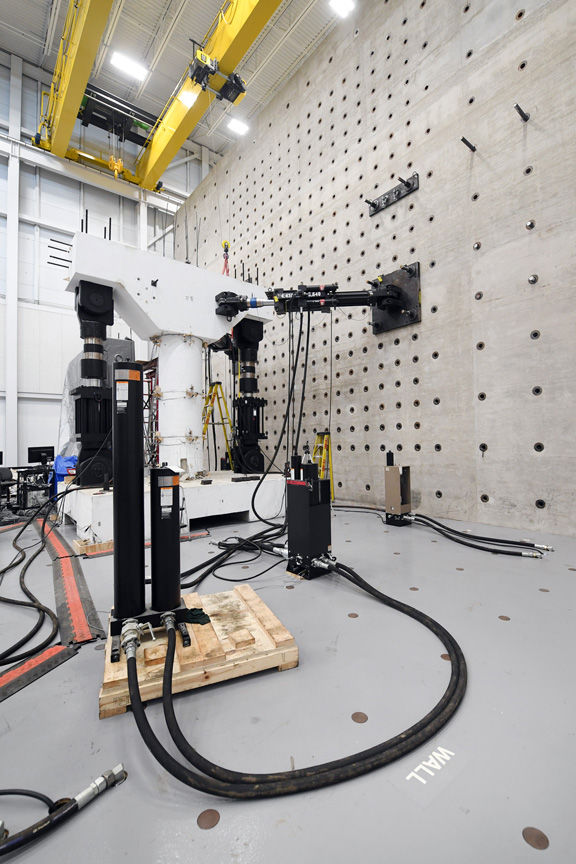 You can read more about the showcase here.

Daylight from floor-to-ceiling windows illuminates the lobby of the Academic Complex Building 1 at Texas A&M University System's RELLIS Campus on Thursday. The campus is hosting a festival and open house on Saturday, Oct. 5.

The Texas A&M University System’s RELLIS Campus has changed dramatically since May 2, 2016, when System Chancellor John Sharp announced his plan to rename the Riverside Campus and build up a multifaceted education, testing, research and high-tech workforce development hub on what was once the Bryan Army Air Base.

On Saturday, scores of organizations within the A&M System and the Blinn College District will come together for an all-afternoon festival complete with games, drone demonstrations, barbecue and fireworks to celebrate the progress made at RELLIS. Several new buildings have opened in 2019, including the RELLIS Academic Alliance Complex and the Texas A&M Transportation Institute headquarters.

Partnerships with the Blinn College District, the U.S. Army Futures Command and private companies loom large on the campus that some officials have described as “a 2,000-acre sandbox.”

“It has been an eventful three-and-a-half years since I first announced the creation of the RELLIS campus,” Sharp said in an A&M System release. “We are headed toward a half-billion dollars in construction, with more on the drawing board. I thought it was time to invite the community to see the campus up close.”

The event, which a System press release describes as “the official ‘Welcome to the RELLIS Campus’ event,” will get underway at 2 p.m. Saturday with a helicopter flyover and include a fireworks show at 8 p.m. Organizers have begun using the hashtag #RELLISfest on various social media platforms to publicize the event.

Family-friendly activities such as a petting zoo and inflatables will be available. Local fire departments will run programs. A press release indicated that A&M AgriLife will host several exhibits, including the Junior Master Gardener Program for gardening and an exhibit on the art and science of barbecue that will provide information about selection, seasoning, smoking and serving.

The RELLIS Campus is just to the south of Texas 21 on the west side of Texas 47. Those attending the free festival will have the opportunity to take guided tours of the campus.

In an interview with The Eagle last week, Templin discussed the history of the RELLIS campus, which came into A&M’s full ownership in 1982, 20 years after the initial lease began. The Army and Air Force held bases on the land in the 1940s and 1950s, respectively.

“This has always been a place that does something for the public good,” Templin said. The A&M System is in the early stages of creating a $130 million combat development complex and testing hub for the Army Futures Command.

Templin said that when Sharp announced the reformation and expansion of the RELLIS campus in 2016, Templin, who was the city manager of College Station at the time, quickly learned more about “the depth of the research that takes place on this campus.” He became RELLIS Campus director in February 2018.

“It’s a neat place. When you get inside of some of these innocuous-looking buildings, you are surrounded by this infectious enthusiasm on the campus,” Templin said. “There are so many bright people here.”

Chris Marrs, the Blinn executive dean at the RELLIS Campus, said last week that the setup of the campus promotes an atmosphere of collaboration. He said Blinn has a 15-acre land lease on the campus and is part of the RELLIS Academic Alliance, a program that allows students to complete their freshman- and sophomore-level courses through Blinn and earn associate’s degrees before wrapping up their bachelor’s degree in related fields from an A&M System regional university located on-site.

Marrs, paraphrasing the recent comments of a student about the alliance program, said, “’The best bumper sticker for what happens academically out here at RELLIS is that I can get a bachelor’s degree from one of 11 universities without leaving Bryan-College Station.”

The new buildings include state-of-the-art simulation labs with a diverse cast of high-fidelity mannequins lying in hospital beds that allow students to get hands-on experience performing CPR, interacting with patients and taking vitals.

Denise Guadagnino, a simulation specialist at Blinn who works with a variety of students, said that the new facilities give them the capability to provide training to students that is responsive to community needs, such as simulating a flu outbreak.

“The whole idea is to really give you that three-dimensional, 360-degree experience of what you’re going to be doing, to give you confidence and to help you hone your skills,” Guadagnino said.

Templin and other RELLIS officials expressed their hopes that the community attends the festival on Saturday both for recreation and to witness the happenings taking place on the campus.

“Researchers and industry partners at RELLIS are cultivating partnerships that deliver life-saving technology while the workforce of tomorrow earns their certifications and degrees,” Templin said. “Bring your family. Bring your co-workers. Bring your friends. It’s about time you meet your new neighbors at the RELLIS Campus.”

10 things to do this weekend around Bryan-College Station

There are plenty of options to keep everyone in the family busy this weekend, including the annual Boonville Days and Wiener Fest celebrations…

Whether live animals and robot creations in a petting zoo, learning about the science of barbecue, watching drones fly or exploring a UH-60 Bl…