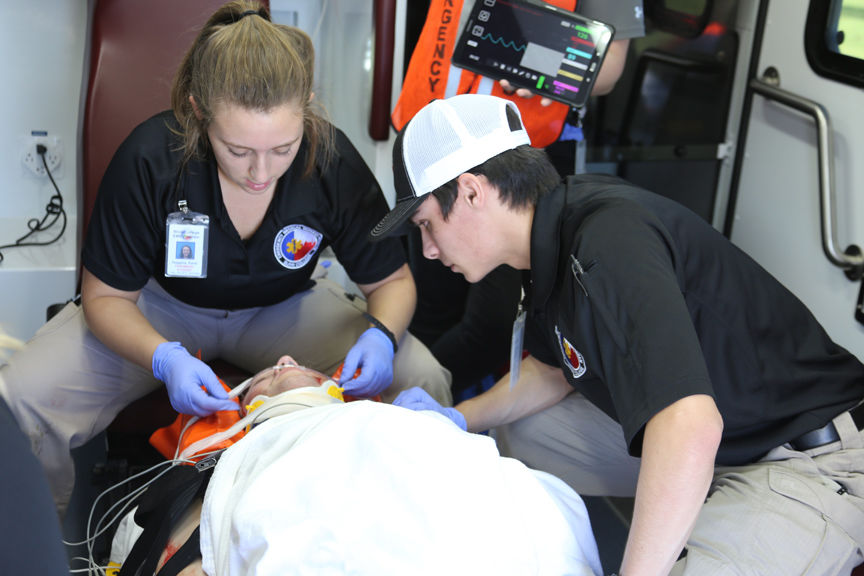 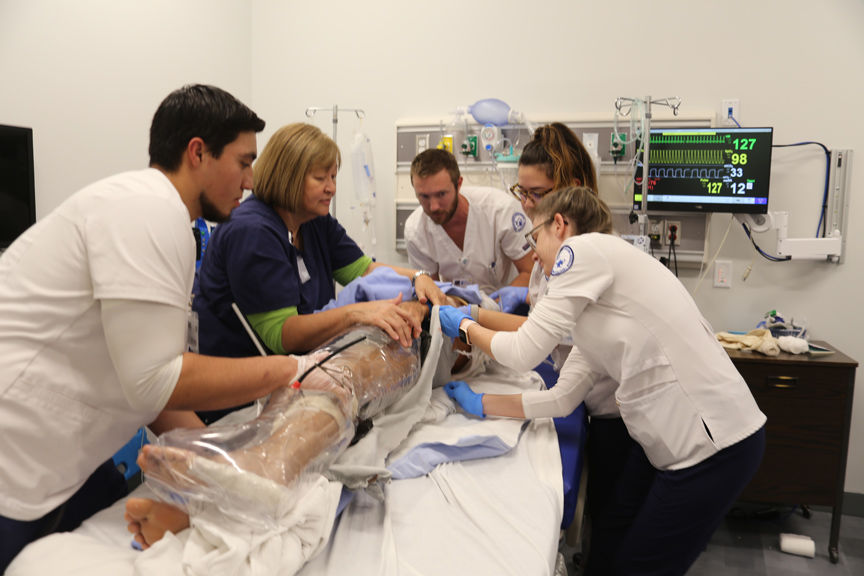 During each simulation, separate small groups of Blinn’s EMS, Nursing and Radiologic Technology students treated an average of five patients, both human and mannequins. 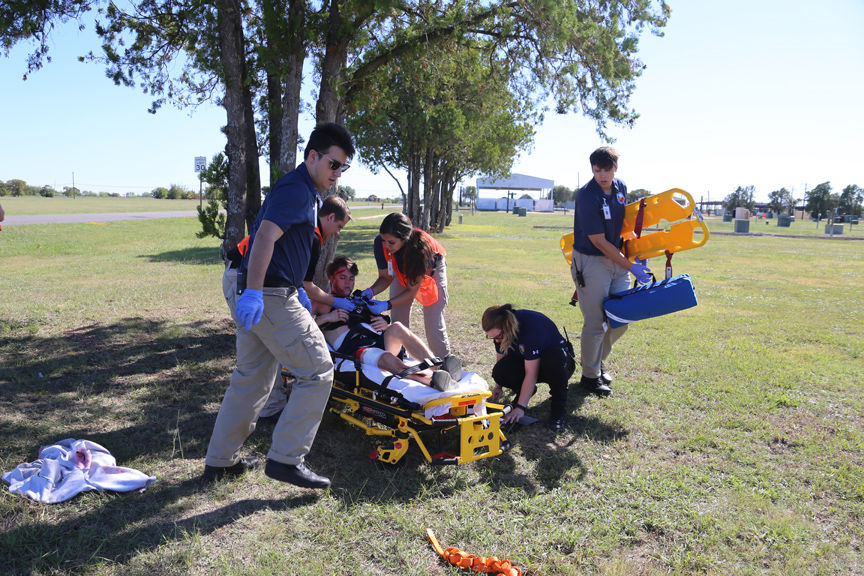 Paid actors worked with the students over the course of the day Monday and Tuesday, through four simulation exercises that lasted 16 hours total.

During each simulation, separate small groups of Blinn’s EMS, Nursing and Radiologic Technology students treated an average of five patients, both human and mannequins.

Paid actors worked with the students over the course of the day Monday and Tuesday, through four simulation exercises that lasted 16 hours total.

Faculty with Blinn College’s nursing, EMS and radiology programs organize numerous emergency scenarios for students each semester, and for the first time, the exercises were conducted at the newly opened RELLIS Academic Complex Building I’s Simulation and Clinical Laboratories.

When College Station resident Nathanael Ryman was brought into the RELLIS laboratories by students with Blinn College’s Emergency Medical Services program on Tuesday, his body appeared to be speckled with bullet wounds. Fake blood and latex covered his face and arms, and synthetic organs were tumbling from his torso. Ryman acted belligerent, as though he were on drugs.

His character had been shot multiple times by police officers as he resisted arrest, and it was the job of students with Blinn College’s Associate Degree Nursing students to treat his wounds despite his wild behavior.

“I talked to police officers [before the simulation], and they told me stories about their interactions with people who have been high,” Ryman said. “So I tried to reflect what had been described to me.”

Ryman and several other paid actors worked with the students over the course of the day Monday and Tuesday, through four simulation exercises that lasted 16 hours total. During each of these simulations, separate small groups of Blinn’s EMS, Nursing and Radiologic Technology students would treat an average of five patients, both human and mannequins.

“We were all working together,” explained nursing student Natalie Brewer. “Basically, we nursing students were acting like we were already nurses in the hospital. And when we needed, EMS students would bring the patients in, and [radiology students] performed X-rays, CT scans and any diagnostic tests to be done.”

One patient appeared to have suffered a broken leg with a penetrating wound. Another patient needed attention after experiencing a heart attack. From the perspective of several of the 39 nursing students participating, these scenarios differed from what they had experienced in real hospitals running clinicals.

“At clinicals, you have an actual [registered] nurse talking you through everything,” said Blinn nursing student Hannah McElroy. “Here, you have to put to the test the information you learned.”

Some students discussed how the stints they’d spent in emergency rooms and intensive care units hadn’t yet exposed them to significantly intense or overwhelming cases, and they noted that opportunities such as the semester simulation offer them a chance to engage with situations they may face in the future.

“My [simulation] patient had a family member with them,” said nursing student Lauren Charles. “I also had to keep the family calm while working with my patient, doing what I needed to do. It’s easy to concentrate on the task, but then you have someone asking you questions, too.”

These bi-annual simulations have been hosted by Blinn College since 2011, according to Sami Rahman, director of the Blinn College District Simulation Labs, though before the fall semester opening of the RELLIS Academic Complex, the exercise took place at Texas A&M’s Health Science Center.

“The environment here lets us go a little further and do more,” Rahman said. “And instead of an ambulance simulator in the lab, here we have a truly running ambulance.”

Indeed, the EMS students were able to drive a real ambulance to different locations on the RELLIS campus where patient-actors were waiting with their manufactured injuries. The students would pick up the patients and deliver them to nursing and radiology students at the laboratory after placing a reporting call in.

“In many of the clinicals, [students] do have hands-on experience in the ER and ICU, though they are not as involved in patient care, because those patients are more fragile,” Rahman explained. “This shows them more up-close, hands-on care. They are seeing the type of care the patient needs, managing that, and getting the patient as safe as they can before transferring them to the next stage. It helps them think on a more organized level, and the responsibility is greater than the clinical level. And, here we can make greater mistakes because we can do it over again.”

“I think there were very positive feelings about what they accomplished and learned,” she said.