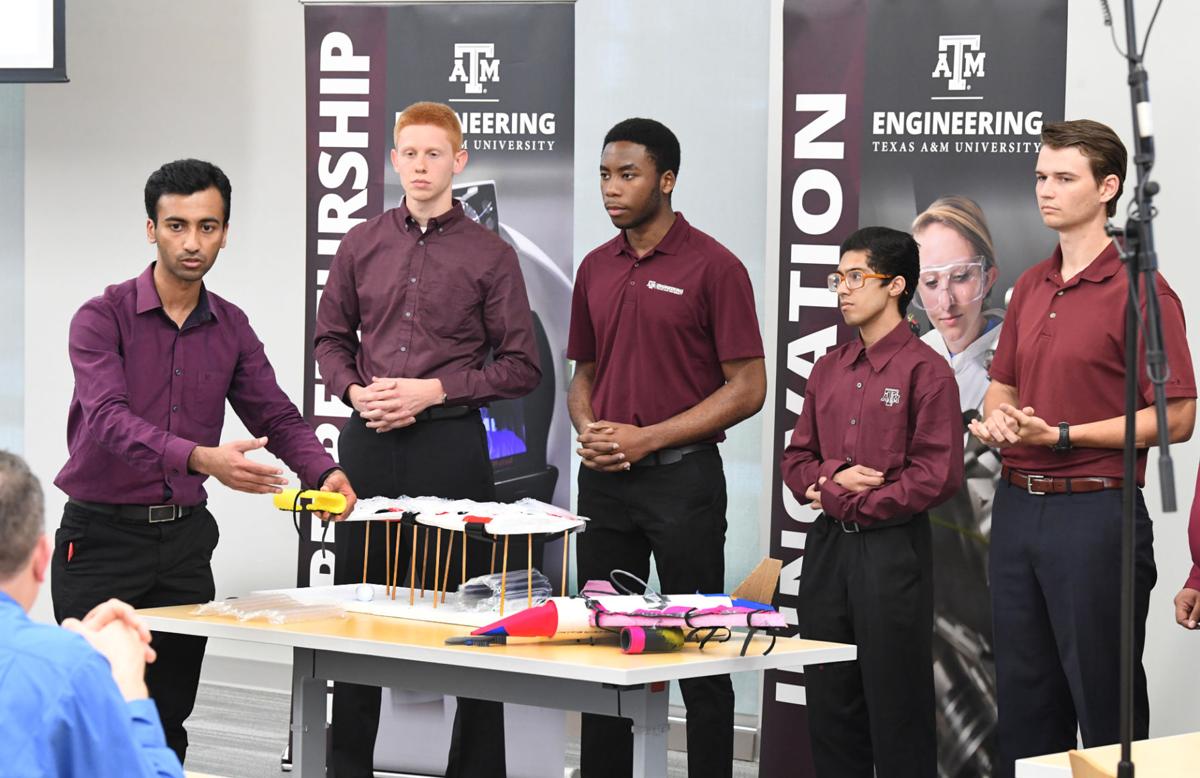 Texas A&M student Jobin Matthews explains to the judges how he and his team created a system for protecting airliners from hail damage during the finals of the Invent For The Planet competition that were held at the Zachary Building on Wednesday. 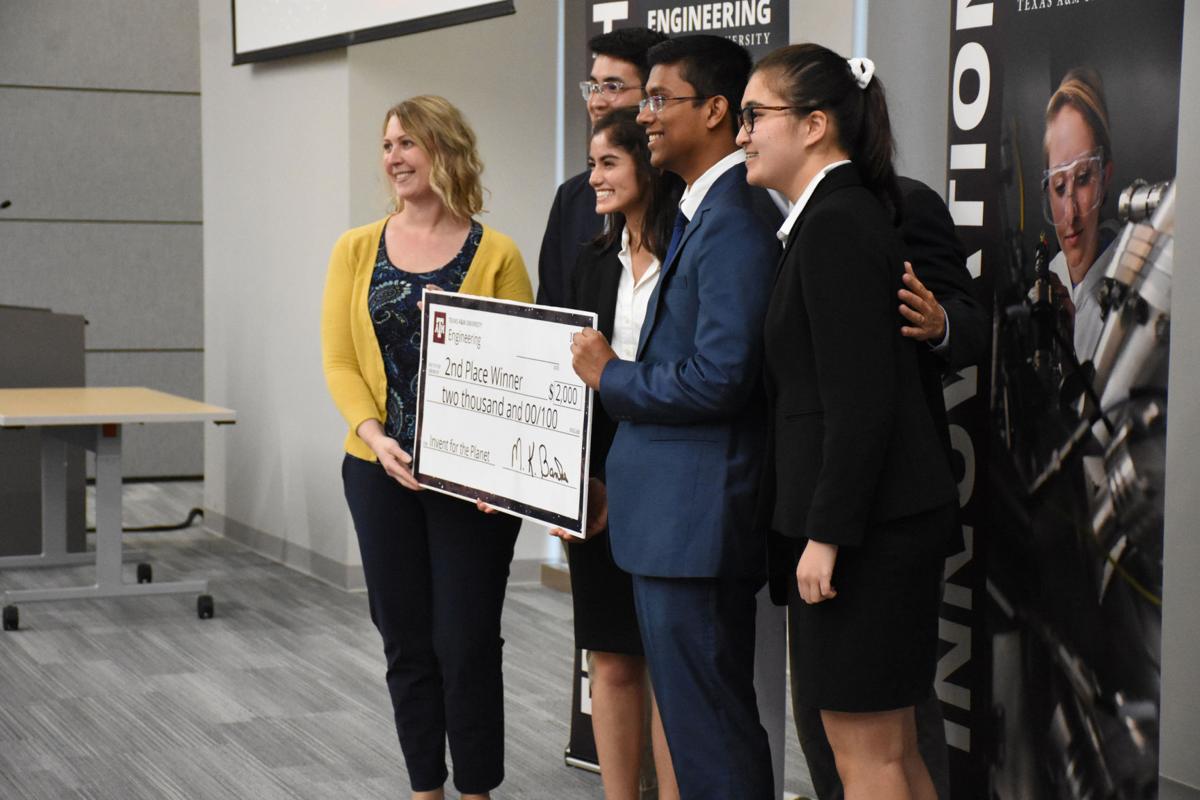 Laura Bernstorf, left helps present the second place Invent for the Planet team, Hydrowhirl from Texas A&M, with a $2,000 check.

Texas A&M student Jobin Matthews explains to the judges how he and his team created a system for protecting airliners from hail damage during the finals of the Invent For The Planet competition that were held at the Zachary Building on Wednesday.

Laura Bernstorf, left helps present the second place Invent for the Planet team, Hydrowhirl from Texas A&M, with a $2,000 check.

Engineering students from Brazil, Wales, Greece, Virginia, Arizona and Texas A&M presented their ideas Wednesday for tackling challenges — ranging from loneliness and lack of clean water to protecting airplanes and helping the blind and elderly — facing people around the world.

More than 600 students from more than 25 universities worldwide entered the second annual Invent for the Planet competition Feb. 15-17, with seven competing in Wednesday’s final presentations in the Zachry Engineering Education Complex.

In the end, Team Tupã from Rio de Janeiro, Brazil, was named the winner of the 2019 competition.

“It’s incredible. It’s really incredible,” team member Giovanni Enokibara said. “When we started this project, we couldn’t imagine that we could get so far.”

The team designed a product called EVI — Echolocation for the Visually Impaired — to help blind and visually impaired people navigate using technology. The EVI can be used as a wand or as sensors worn on a hat or shirt and vibrates to let the user know an obstacle is in front of or to the side of them and how close the object or person is.

With the $3,000 prize, Enokibara said, the team plans to invest in their product and continue testing it.

Team Tupã and the other six finalists created their prototypes during a 48-hour “intensive design experience” in February.

“It’s a tremendous, tremendous thing for the students,” mentor Ron Pekny said. “They’re presented with an opportunity to really think and perform outside of the box. It’s a challenge; it’s a true challenge.”

At the end of the 48-hour marathon, each university had a local competition simultaneously. The presentations then continued around the world.

Judges in College Station then looked at each local winner’s presentation to choose the five finalists.

The additional two finalists were chosen Tuesday as “crowd favorites.” Visitors to A&M’s Zachry Engineering Education Complex could vote for one of three teams — one from Texas A&M and two from Arizona State University — to compete in the final presentations. Ultimately, Team DAeEH from Arizona State and Hydrowhirl from Texas A&M were both put into the finals after the votes were too close to declare one favorite.

The Texas A&M team invented a device that would filter water for countries without access to a clean supply.

“It is one of the most thrilling things that I’ve been able to see. … To be able to see students from different places interact and work with each other, to see these ideas come forward. We’ve had patents come out of it; we’ve had startups come out of it,” Texas A&M Director of Engineering Entrepreneurship and Associate Professor of Practice Rodney Boehm said about the competition.

At one point, students from India and Pakistan were working together and sending messages even while their governments were fighting, he said. The interaction continued through the final presentations.

“Our world is such a small world. We have to be able to work with everybody,” Boehm said. “You see the interaction, you see them be excited to work with each other. I hope these connections and the business relationships continue.”

Though there were three top teams chosen out of the seven finalists, judge Laura Bernstorf with AirBus encouraged all of the teams to continue with their product and ideas.

“Not winning here doesn’t mean that it’s not a winning idea. It just means that for the criteria that we were looking at for this one event, that was the result,” she said, noting with the right company and customer, each of the ideas has “all the promise in the world.”

Before declaring the winning teams, Boehm thanked the students and faculty members who participated and supported the teams and competition for trusting the process to help create something “unique in the world.”