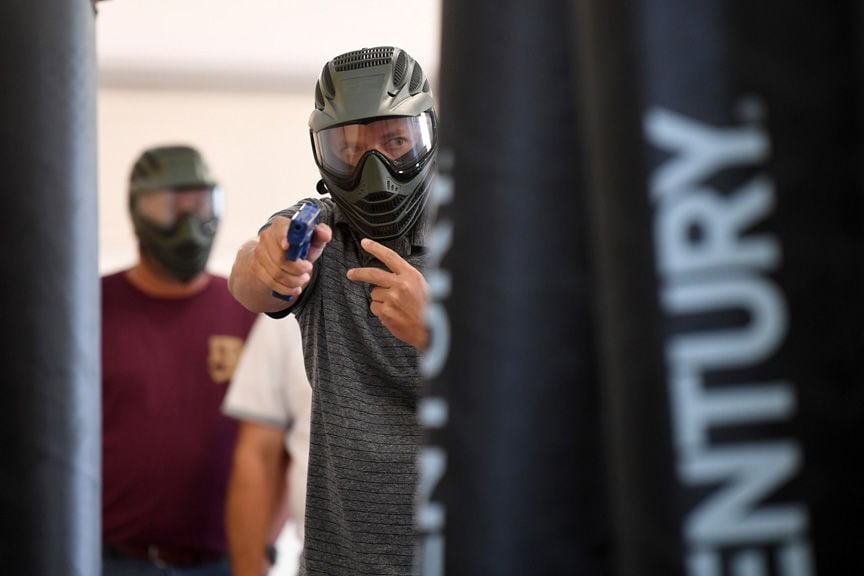 A participant in the school marshal training at TEEX's Institute for Law Enforcement and Protective Services Excellence signals to his partner as they perform training exercises using simulated firearms on Friday. 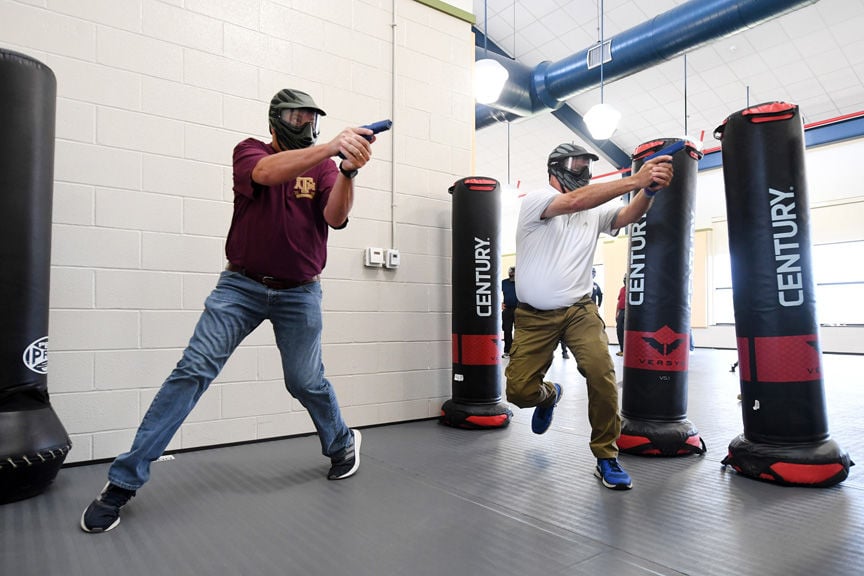 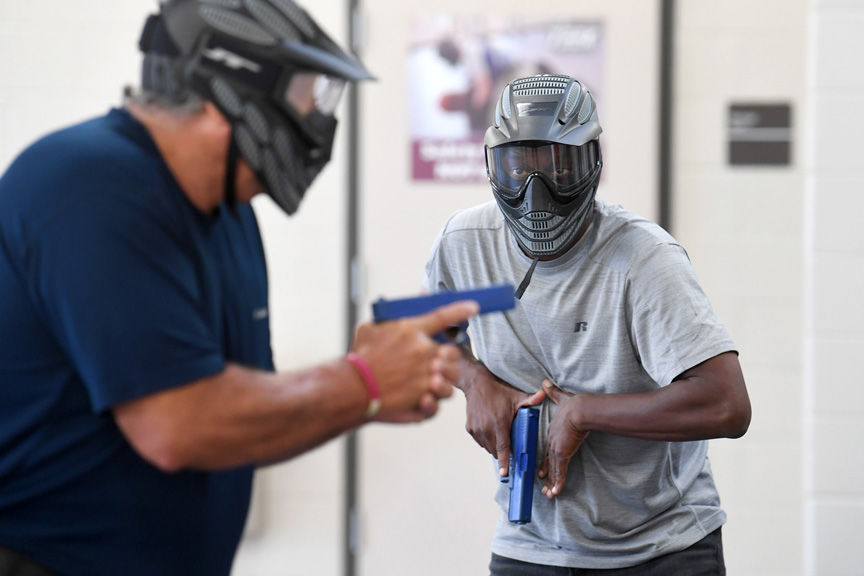 Teams of two use simulated firearms as they practice skills learned this week during school marshal training at TEEX's Institute for Law Enforcement and Protective Services Excellence at Texas A&M University System's RELLIS Campus on Friday.

A participant in the school marshal training at TEEX's Institute for Law Enforcement and Protective Services Excellence signals to his partner as they perform training exercises using simulated firearms on Friday.

Teams of two use simulated firearms as they practice skills learned this week during school marshal training at TEEX's Institute for Law Enforcement and Protective Services Excellence at Texas A&M University System's RELLIS Campus on Friday.

The Texas Commission on Law Enforcement’s school marshal program was established to protect K-12 and junior college campuses from threats. According to TCOLE Government Relations director Gretchen Grigsby, between the program’s inception in 2013 and school shootings in Parkland, Florida, and Santa Fe in 2018, only 34 people had become marshals. Since the shootings, Gov. Greg Abbott approved grant money to be allocated toward the program, and more than 220 marshals will have completed the program by the end of the month.

Teachers, administrators, coaches, security officers, librarians and other school staff volunteered to receive the 80-hour training through either the Texas A&M Engineering Extension Service in College Station or the West Central Texas Council of Governments in Abilene.

A certified marshal will have undergone some of the same training police officers get. Through courses such as that offered this week in College Station, these men and women are taught how to clear rooms, confront an active shooter, provide first aid and administer trauma care. Marshals must complete this course, be vetted both by their school district and TCOLE, pass a psychological evaluation and receive 16 hours of refresher training every two years. Their identities as marshals are, in many cases, kept private by their districts.

“We teach them about laws and how [this] relates to them, be it the penal code or educational code,” TEEX training manager Kyle McNew said. “... and just because they come in with their handgun license, it doesn’t mean they are the best shooter. We spend 30 hours on the range with them, using a pistol.”

He explained that a school marshal differs from a teacher who is armed under Texas’ Guardian Plan. The Guardian Plan allows school employees to carry firearms on campus when approved to do so by their district. Local school districts including Navasota ISD and Milano ISD have instituted the Guardian Plan, which has different guidelines for gun carriers.

The media was asked by TCOLE and TEEX to keep participants’ names and school districts anonymous to protect the marshals’ identities.

One school marshal who spoke with The Eagle said he has more than 30 years experience in law enforcement and came out of retirement to apply for a job as a full-time security staffer for an elementary school. He has already spent several days at the school learning the layout and becoming acquainted with teachers. After completing the TCOLE course this weekend, he will begin defending the campus next week.

“I have a vested interest,” he said. “I have three grandchildren in elementary schools there. ... I’m at a [campus] with almost 500 children, and I’ll be able to protect them instead of being at the house. I’m tired of seeing these things happen, and I want to know that if there is a threat, I can deal with it. I want to know if someone threatens my school, I can protect the kids. ... Children ought to be able to go to school and not feel afraid.”

Michael R. Anu, TCOLE director of special services and enforcement, assists in overseeing the marshal training and said that instructors will prepare the participants as best they can for exactly how an active shooter situation would likely play out. The educators are pelted with nonlethal marking cartridges from modified handguns and rifles and are required to work through a practice scenario in which the simulated sounds of gunfire and children screaming are played.

Instructors show those in training how to react when, amidst the threat of a person wielding a weapon, a mob of students carrying backpacks and handheld objects run through the halls. Marshals wielding guns must also consider that, especially at a school with small children, unarmed students may dash toward them with outstretched arms seeking an embrace, Antu said.

To learn more about the marshal program, visit www.tcole.texas.gov.

Two rural school districts in the area are preparing to join 172 other districts in Texas in allowing certain employees to conceal carry firearms on campus, in the wake of a February school shooting in Parkland, Florida, that left 17 dead.