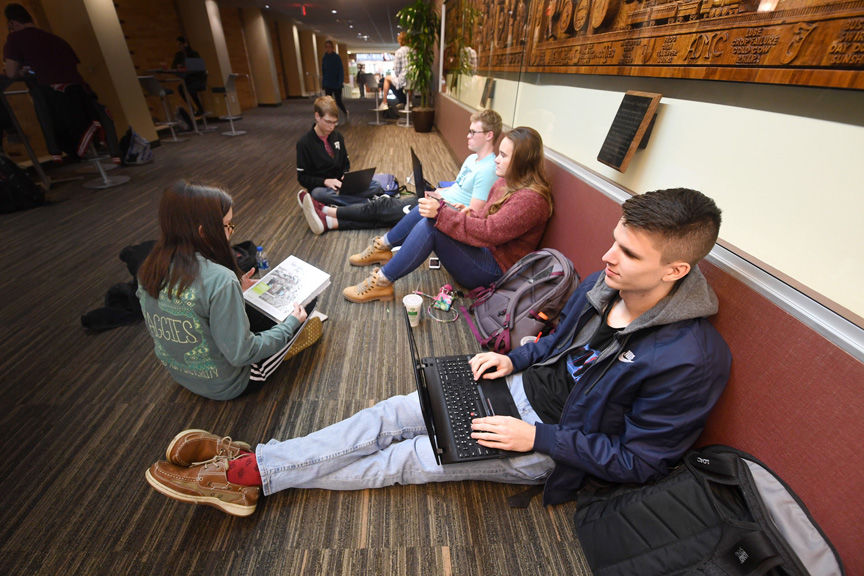 Undergraduate students Rebekah Anderson, left, Joshua Gruener, Kyle Kohleffel, Clara Ohlenbusch and Oliver Raney study in a hallway in the Memorial Student Center during lunchtime Thursday. A university associate vice president said last week the school is aiming for the Aggie Class of 2023 to be slightly smaller than its immediate predecessors 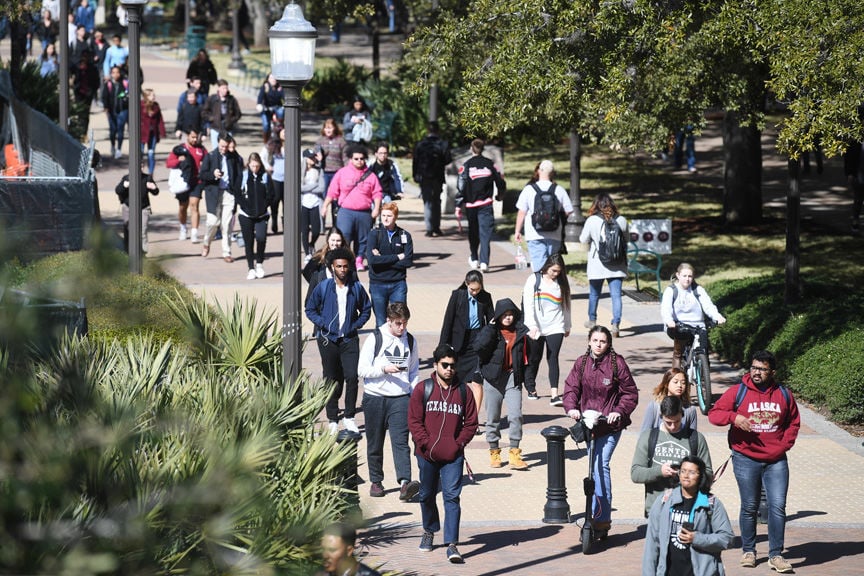 Students are seen walking on campus at Texas A&M University on Thursday afternoon. A university associate vice president said last week the school is aiming for the Aggie Class of 2023 to be slightly smaller than its immediate predecessors

Undergraduate students Rebekah Anderson, left, Joshua Gruener, Kyle Kohleffel, Clara Ohlenbusch and Oliver Raney study in a hallway in the Memorial Student Center during lunchtime Thursday. A university associate vice president said last week the school is aiming for the Aggie Class of 2023 to be slightly smaller than its immediate predecessors

Students are seen walking on campus at Texas A&M University on Thursday afternoon. A university associate vice president said last week the school is aiming for the Aggie Class of 2023 to be slightly smaller than its immediate predecessors

As Texas A&M's student population climbs closer to 70,000, a university associate vice president said last week the school is aiming for the Aggie Class of 2023 to be slightly smaller than its immediate predecessors -- an effort, he said, to plateau the "meteoric rise" of A&M's total numbers.

Chad Wootton, A&M associate vice president for external affairs, said at the Bryan-College Station Chamber of Commerce's annual Economic Outlook Conference on Wednesday that the university is aiming for a fall 2019 freshman class of between 10,000 and 10,500, which would be lower than the 10,757 freshmen in fall 2018 and the 10,769 freshmen on campus in fall 2017.

"For the community, the message is that the last [5 to 10] years of growth we've had is not something that's sustainable," Wootton said in a follow-up interview with The Eagle on Friday. "There will be a leveling-off, a plateau. What I shared [Wednesday] was that the first indication of that will be our freshman class. And we are operating and working toward a freshman class that'll be between 10,000 and 10,500 students."

Wootton said the increase in students at A&M has been due to overall population growth in the state, as well as an increase in academically competitive high school seniors.

"As a public university, we hold a responsibility to serve those young people who have that interest in commitment, and obviously speak to the future health and welfare of our state by having an educated workforce," he said.

Texas A&M System Chancellor John Sharp addressed the student population growth at the A&M university faculty senate meeting Jan. 14. His remarks were first chronicled by 1620 WTAW-AM on Tuesday. He deferred to A&M University President Michael K. Young on the question of how large the university's student body should be but provided remarks on the role of A&M as a land grant university.

"We haven't capped our enrollment," Sharp said. "If you're a land grant university, and you're in a state that's growing by leaps and bounds, you have a responsibility to, I think, meet the need and educate the young men and women that do it."

Texas A&M reported 69,367 students enrolled on the 20th class day of the 2018-19 school year. Those numbers include students in Galveston, McAllen and Doha, Qatar. There are currently about 64,890 students enrolled at A&M. Spring numbers typically run lower than fall numbers because of winter graduation and attrition.

Wootton said the admissions staff has been "reverse-engineering" toward the goal of a slightly smaller class beginning with the application period, which ran from July 1 to Dec. 1 of last year. "What we do is we open the application period along with all the Texas schools, use the Texas common app. … In that time frame, we received just over 49,000 applications, and where we ended it up was just over 42,000 of those were considered complete and in our review process."

Wootton said the school has sent out about 20,000 letters of admission, largely through the top 10 percent rule and other A&M automatic admission pools. He said that due in part to the Texas Common Application, many students apply to several schools.

"As we move through the fall, those automatics -- plus those who have come through review and are clearly above our historical norms for acceptance -- we have already offered admission to 20,000 students, and will likely offer to about 2,000 more. Our admissions magicians help us get a sense that to get to 10,500 students, that means about 22,000 offers," Wootton said.

He said that about 4,000 undergraduates-to-be have already accepted an admission offer from A&M, and that others who have been or will be accepted have until May 1 to confirm attendance.

For fall 2014, according to reporting from the Texas Tribune, the school set a goal of increasing its freshman enrollment by about 1,500 to around 9,700. It ended up exceeding that, with about 10,300 freshmen accepting offers of admission that year.

"Many of our commitments, particularly over the last five or 10 years, have been: 'If the state's growing, we have to grow.' And we took the steps to be able to do that," Wootton said Friday. "That was extra chemistry classes, or a larger freshman class, more advisers, etcetera. But we also faced some challenges. In some cases, we outgrew even our own planning."

Joseph Pettibon, vice president for enrollment and academic services at A&M, said Saturday that "targeted growth" would continue through efforts to improve undergraduate retention and through graduate and distance education programs.

"A&M has managed exceptional growth over the last decade in response to a rising pool of qualified applicants and to meet the state's expectations for degree attainment," Pettibon said via email. "Under current legislative appropriations and our goal to maintain quality educational experience, we are leveling off our undergraduate enrollment in College Station programs for the foreseeable future as we realign our infrastructure limitations to match the growth."

Pettibon said that infrastructure work includes an increase in faculty, addition of facilities and enhancing support services. Pettibon and two other A&M leaders said retention and student support is a task the university is devoting ever-more resources toward.

Carol Binzer, A&M Residence Life director of administrative and support services, said Friday that 11,067 students were living on the A&M campus as of the 12th class day last fall, She said that Residence Life was currently "a bit under" 100 percent capacity in terms of beds occupied, which she described as normal for the second semester.

Binzer said incoming students were already "in line" to select housing for the fall, a process she described with a laugh as similar to first-come, first-serve-style plane seat selection.

"We always think we have an advantage in helping freshmen build for success," Binzer said. "Freshmen, particularly traditional freshmen, ought to live on campus for at least one year. We can't require it, obviously, because we don't have enough beds, but we do think it is helpful."

"While we are among the state's leaders in graduating students in six years from enrollment, we must continue to support faculty teaching, improve academic innovations and address gaps in our academic support services to ensure the Aggie experience remains accessible and as valuable to each student," Stephenson said.

"Recommendations from the university's Student Success Initiative, which will be announced in the coming weeks, will help us meet these commitments."

Texas A&M University has 64,882 students enrolled for the spring 2019 semester, a record for spring enrollment. That number includes 59,74…

With a change in Texas A&M’s admission options on the horizon, fewer students applying for fall 2021 and beyond will be able to rely solel…

Oh no! Sharp must lower standards even further. The university must not lose this money.