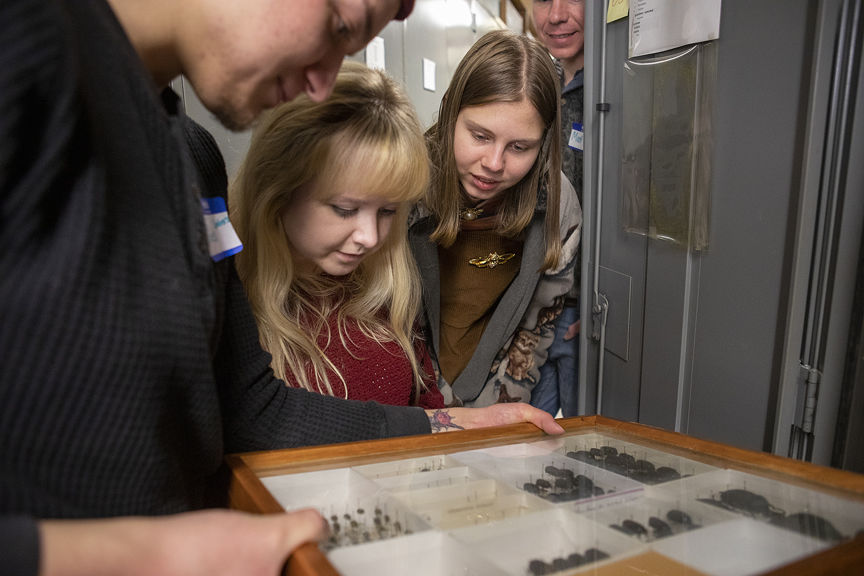 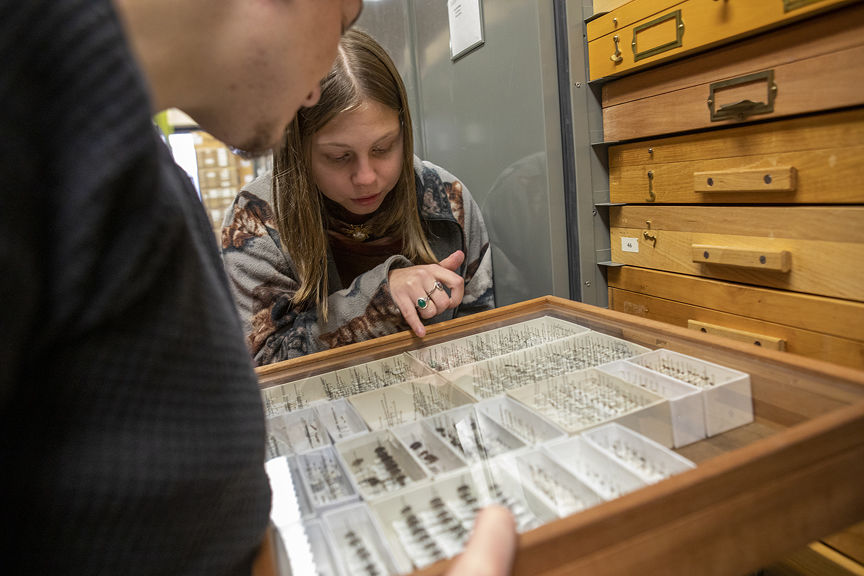 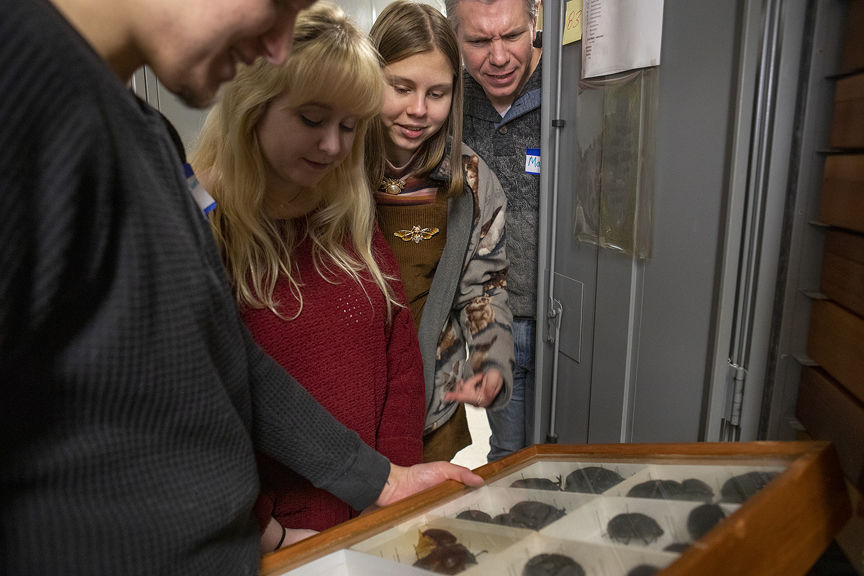 Parrish Brady, a research associate of integrative biology at the University of Texas in Austin, admired a drawer full of beetle specimens with exterior wing casings that shimmered in brilliant metallic green, copper and gold colors. He’d spent the morning talking with other insect enthusiasts on the second floor of the Heep Building, as he’s done for years now.

“For me, this is about networking,” he said. “I’ve learned how to collect certain species, and I learn about where to find them.”

Like others attending the event, Brady’s been interested in collecting and studying insects since an adult gave him a science book about bugs when he was a child.

“There’s a lot I like about insects,” he said, later sharing that he has a collection of about 500 species back in Austin. “I like how they look, and I also like their behaviors. There’s the thrill of trying to beat something, like trying to go after [a] wasp nest. Then there’s also being outside; I like the adventure in trying to find the insects, and the adventure of other things I might find while doing that.”

Karen Wright, associate curator with the A&M insect collection, shared that the collection has been amassed for decades by A&M staff, students and donors. The insects are pinned, preserved and organized for observation by outside entities such as the Texas Parks & Wildlife Department, the Texas A&M AgriLife Extension and even the U.S. military; as well as individual entomologists. The specimens can be used not only to study the bugs themselves, but to implement in research regarding agriculture, epidemiology, forensics and general matters of ecology.

But this annual open house, she said, is intended specifically for entomology fans. Some in attendance were retired professors, while others — including a few children — were just dedicated hobbyists.

“They have spent their entire lives learning, their particular group,” Wright said.

Ashley Schmitz of Corpus Christi manages a grocery store, but his real passion is studying Texan and Ugandan insects. He has built a personal collection of more than 10,000 species, some of which he is donating to Texas A&M this weekend.

“I like that the smaller insects are, the more interesting they are,” he said, elaborating that larger insects are more popular and already well-explored by scientists.

When Schmitz was in high school during the 1980s, he said, he had a class project that required a leaf collection and an insect collection. This assignment got the ball rolling for Schmitz’s love of entomology.

“What really inspired my interest was that I was going through the field guides available at the time, and I started flipping though those books and seeing what kinds of insects were out there,” he said.

Schmitz said the annual open house in College Station is his best opportunity to network with other people who share his hobby. On Saturday, he found himself in the corner of one of the collection rooms, assisting 8-year-old Roman Smith of Bryan and his mother as they maneuvered a microscope. Smith started collecting insects when he was 6 years old in preparation for a Cub Scouts science project.

“I collect ants and other kinds of species like beetles,” Smith said, noting that ants — specifically leaf cutter ants — were his favorites. He and his mother, Charika Smith, have been collecting ants at College Station’s Lick Creek Park in preparation for another Scouting project. Smith said he has already established a collection of 50 insects.

“Ants can do incredible stuff,” he said. “They protect the queen, build parts of the nest, and they destroy crops. They make soil helpful for plants to grow, and they eat dead bugs.”

Wright said the collection area has only a limited space for visitors, and collection managers do not have the means for large events or tours. However, she said, she is happy to share with anyone information on how the insect collection helps researchers around the world.

To learn more about the insect collection, visit entomology.tamu.edu.