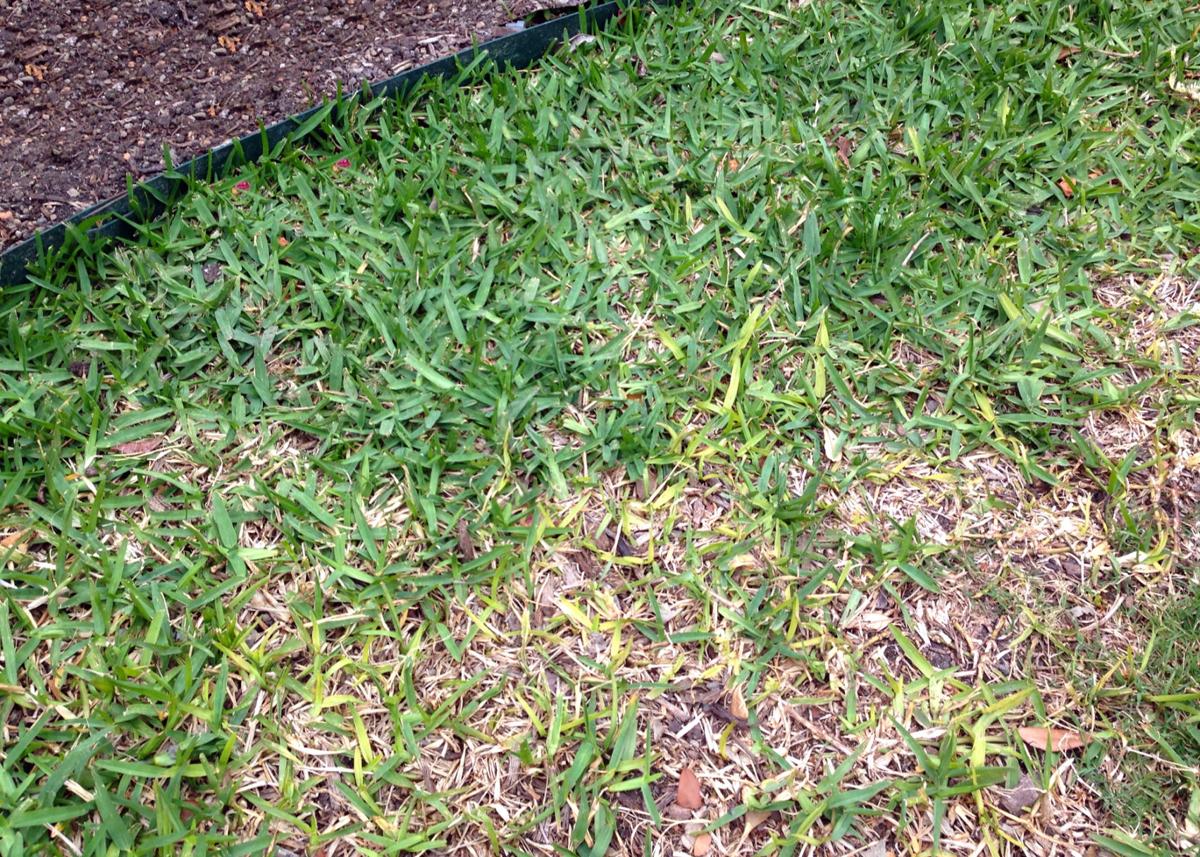 Take all root rot (TARR) is a disease that first became commonplace about 25 years ago. It causes grass to green up unevenly, even to die out in patches. 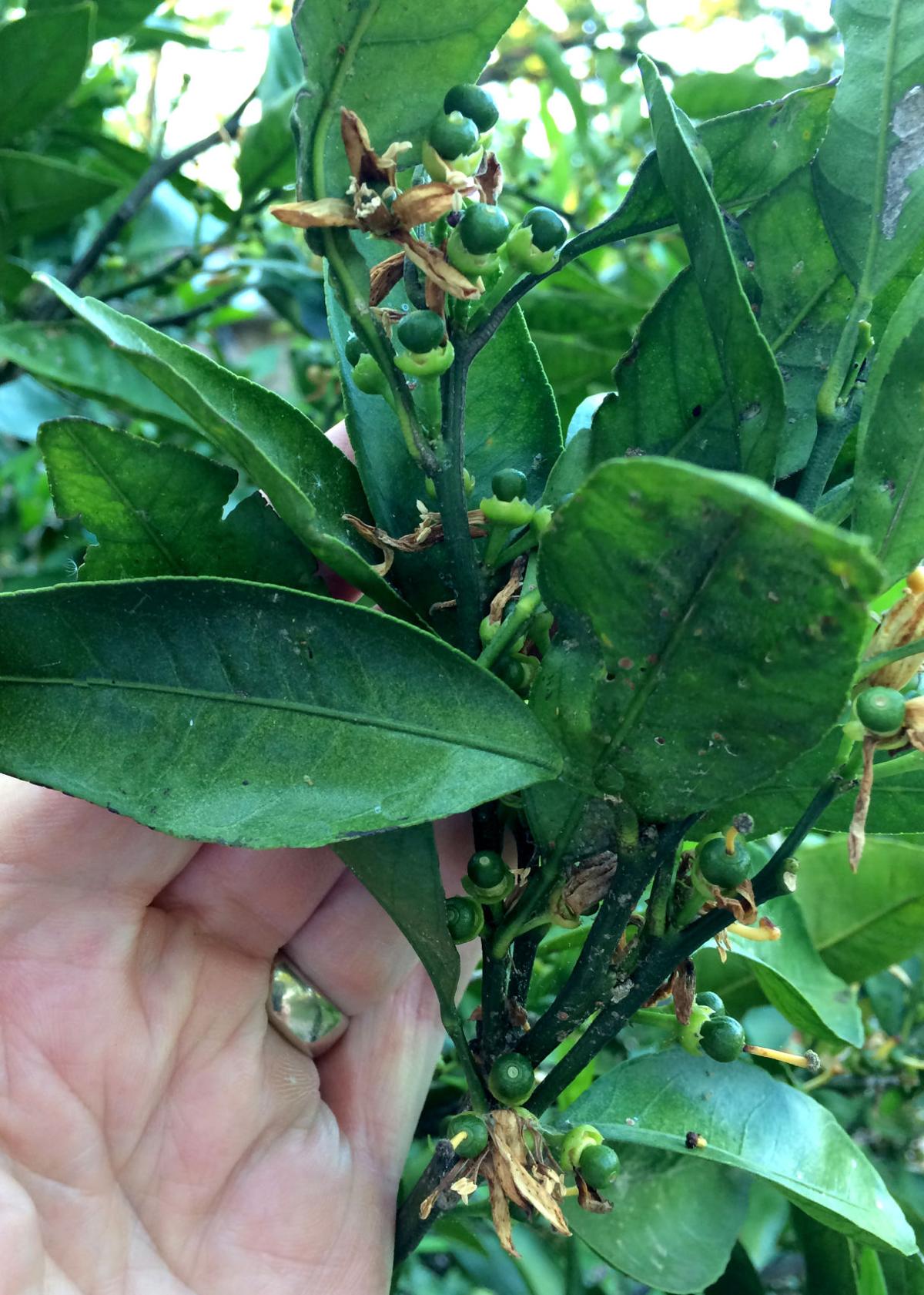 For fewer fruit of higher quality on plants like this Mandarin orange tree, thin the fruit to remain 2-3 inches apart on the branches. 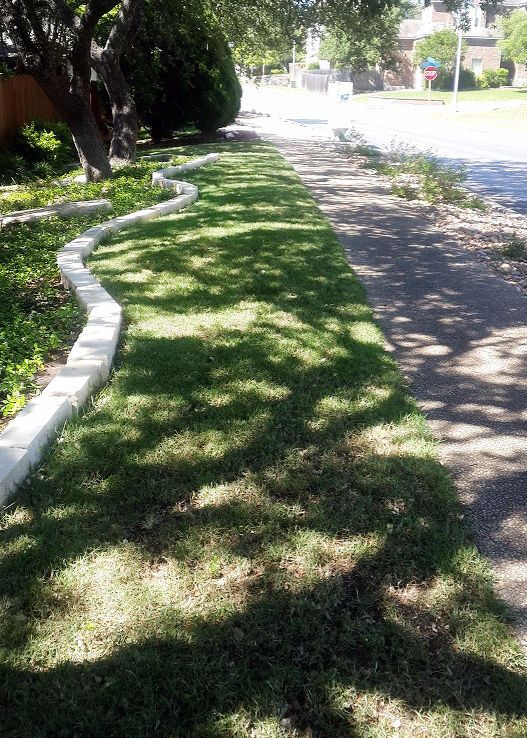 Zoysias are intermediate to St. Augustine and bermuda in many features, light requirements being one of them. 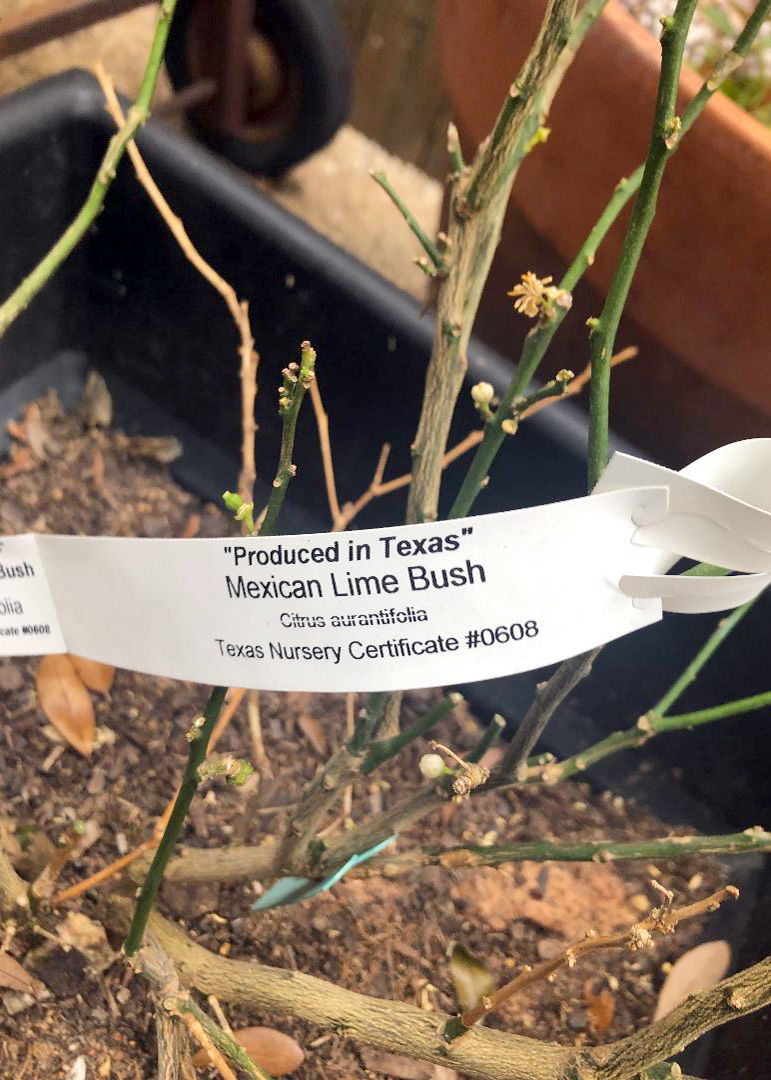 This lime bush may have gotten too cold this winter in spite of being covered. However, the stems are at least still green, so there is hope.

Take all root rot (TARR) is a disease that first became commonplace about 25 years ago. It causes grass to green up unevenly, even to die out in patches.

For fewer fruit of higher quality on plants like this Mandarin orange tree, thin the fruit to remain 2-3 inches apart on the branches.

Zoysias are intermediate to St. Augustine and bermuda in many features, light requirements being one of them.

This lime bush may have gotten too cold this winter in spite of being covered. However, the stems are at least still green, so there is hope.

Dear Neil: We had a beautiful St. Augustine lawn last fall, but now the grass is either yellowed or dead. We had our lawn care people apply a fungicide, and we have used peat moss in the past. What can we do?

A: This is take all root rot (TARR). Your photos were thumbnails with low resolution so I’ve used another photo for purposes of printing in the newspaper. It’s a disease that first became commonplace about 25 years ago. It causes grass to green up unevenly, even to die out in patches as you have observed. Phil Colbaugh, before he retired as plant pathologist with the Texas Agricultural Experiment Station of Texas A&M, determined that sphagnum peat moss was the best means of slowing the spread. Until this year I followed his lead, suggesting that we spread a 1-inch layer of peat over infected lawns in April or May. It has always worked well. Still staying tied into the subject, Dr. Colbaugh contacted me a couple of months ago to suggest that finally we have a fungicide that has given good results with this disease. It is Azoxystrobin, sold at the consumer level as Scott’s Disease-EX and to commercial lawn care companies as Heritage. He says it stops the disease in its tracks at less cost and a lot less trouble.

Dear Neil: I have several live oaks and a Bradford pear that need to be pruned to raise their canopies. Can I still do this at this time of year? Do I need to use pruning sealant on the cut surfaces?

A: Plant pathologists and foresters tell us that the fungal mats of oak wilt are active in the spring and early summer. Therefore, the time that we should try never to prune oaks is Valentine’s Day to mid-July. From mid-July on through the rest of the summer, all fall and most of the winter until mid-February, you are fine to prune oaks. Cut surfaces should always be protected by pruning paint, but that’s only the case with oaks. As for your pear, it’s very difficult to prune them correctly. They usually have a grouping of main branches that collects around the trunk just 28 or 30 inches from the ground. It’s difficult to picture raising the canopy of a Bradford peat, but if you can see a clear path where you could remove a branch or two, it won’t hurt the tree to do so at any time. Make all cuts flush with the trunk.

Dear Neil: I have a 6-year-old Mandarin orange tree. This year it has set an extraordinary number of fruit. I’m wondering if it will self-thin, or if I will need to thin them out manually. The fruit have always been of nice size. Three years ago it had 25. Two years ago it had 550. Last year about 200. It looks like there are thousands this year, and it’s still blooming. Can a tree do damage to itself if it over-produces? It’s 8 feet tall and 10 feet wide. I have it growing in the ground, and I cover, protect and heat it during cold spells.

A: Well done! You can remember how the tree responded to having 550 fruit. If that caused any limb breakage, or if it was, in any way, responsible for the drop off to 200 fruit last year, then you’ve answered your own question. I would think that you would want to have fewer fruit of higher quality, so yes, I would think that you’d want to thin the fruit to remain 2-3 inches apart on the branches.

Dear Neil: This parkway bed (photo attached) was bermudagrass, but it was struggling, so I replaced it with Palisades zoysia this time last year. I also replaced other bermuda with Asian jasmine. The jasmine is doing great but, as you can see, the zoysia is not. I can see the seams where the pieces of sod were laid. Is this take all root rot, or too little sunlight, or is it something else?

A: If I were to judge just from the photo I would say it’s too little light. Zoysias are intermediate to St. Augustine and bermuda in many features, light requirements being one of them. Asian jasmine, by comparison, will grow in total shade. Also, if it were TARR, the grass would have grown and concealed the seams and the disease wouldn’t be exposing them. Unfortunately, there isn’t anything you can add to compensate for lack of light other than more light.

Dear Neil: This Mexican lime bush was given to me in memory of my late husband in early September. I kept it covered during the freezing weather, but I don’t know what I have or have not done. Any help would be appreciated.

A: It looks like it might still have gotten too cold in spite of the cover. However, the stems are at least still green, so there is hope. I would find a nice pot for it and a bag of really good, lightweight potting soil. Tell a Texas Certified Nursery Professional what you’re trying to do and let him or her help you. You probably don’t need to take the plant with you, but take measurements and the photo.

Dear Neil: A week or so before my magnolia blooms its leaves turn brown and start to fall. The flowers are pretty, but the tree looks so ugly otherwise. What can I do?

A: Leaf drop in April and May is normal for southern magnolias. That’s also their bloom time. My best advice is that you keep the tree as healthy and vigorous as you can all year long. That should minimize the down time in the spring. If you look at other magnolias in your neighborhood, your tree is probably not alone.

TEXAS GARDENING: Nothing to be done for root rot

Dear Neil: I have two yaupon hollies that are a couple of years old. One is deep green and t…

Dear Neil: I’ve noticed that some of my lantanas produce seeds, and they don’t seem to flower as continuously as the yellow, trailing type. Wh…

Dear Neil: How can I get rid of oxalis in my St. Augustine/bermuda lawn? It is growing in an area where it’s too sunny and hot for St. Augusti…