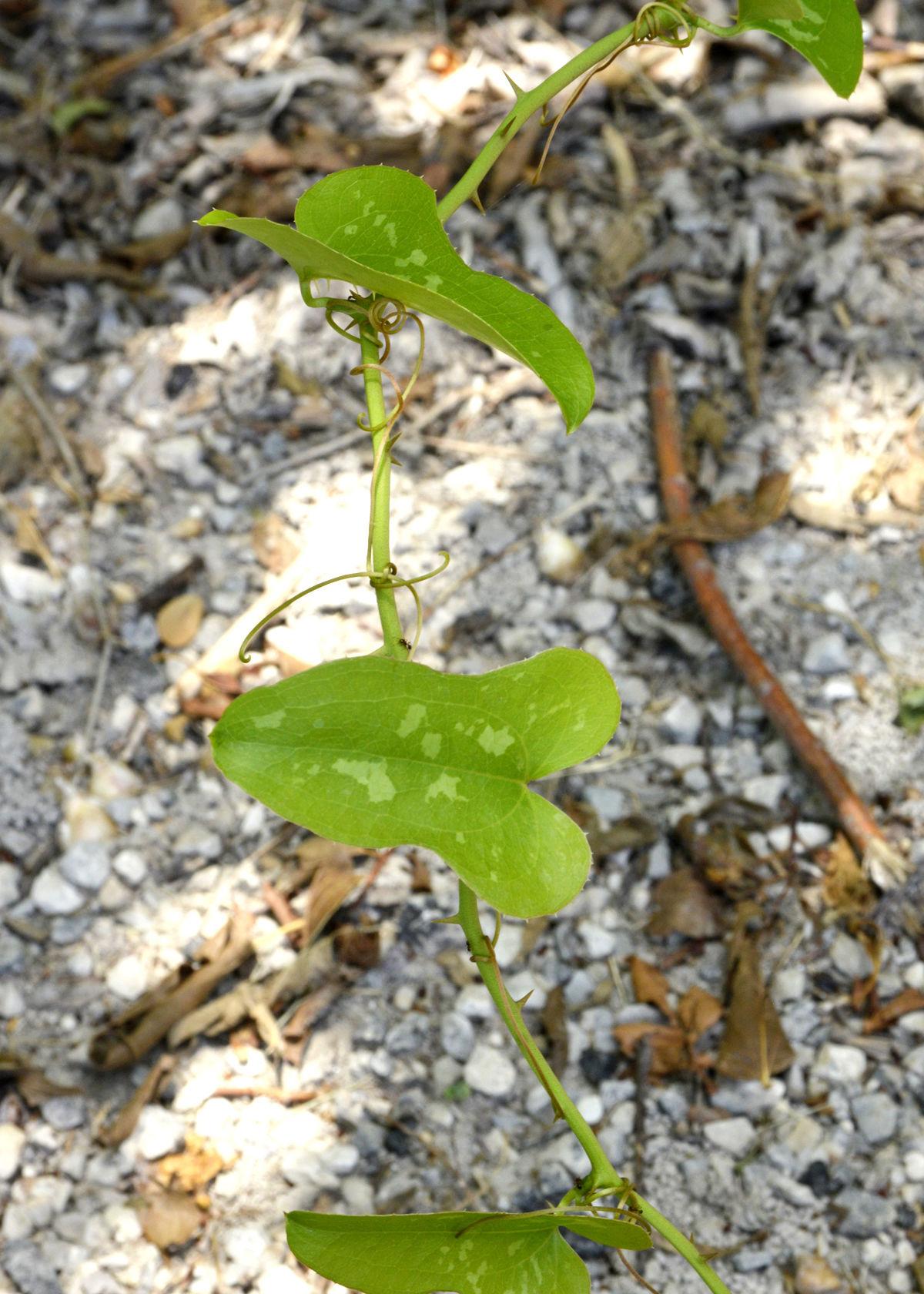 Herbicide will not do much against smilax briar. Digging it out by hand when the soil is wet is a good way to remove them. 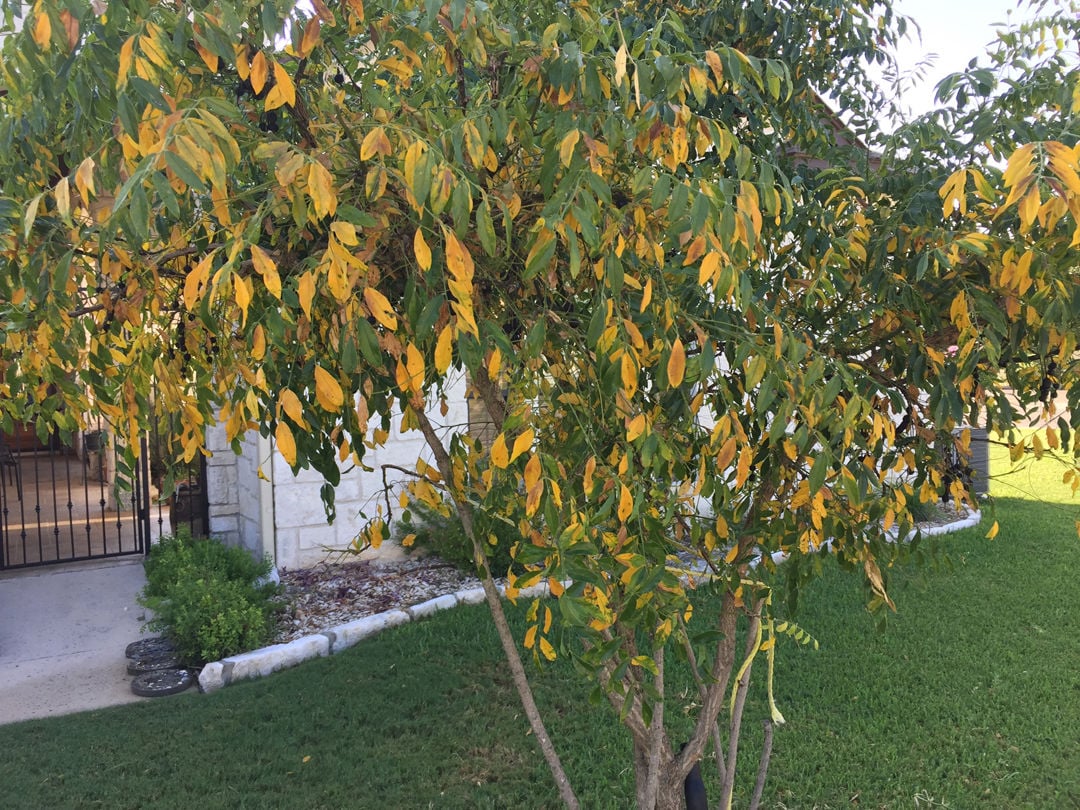 This Eve's necklace tree may be affected by cotton root rot or some other lower trunk problem. 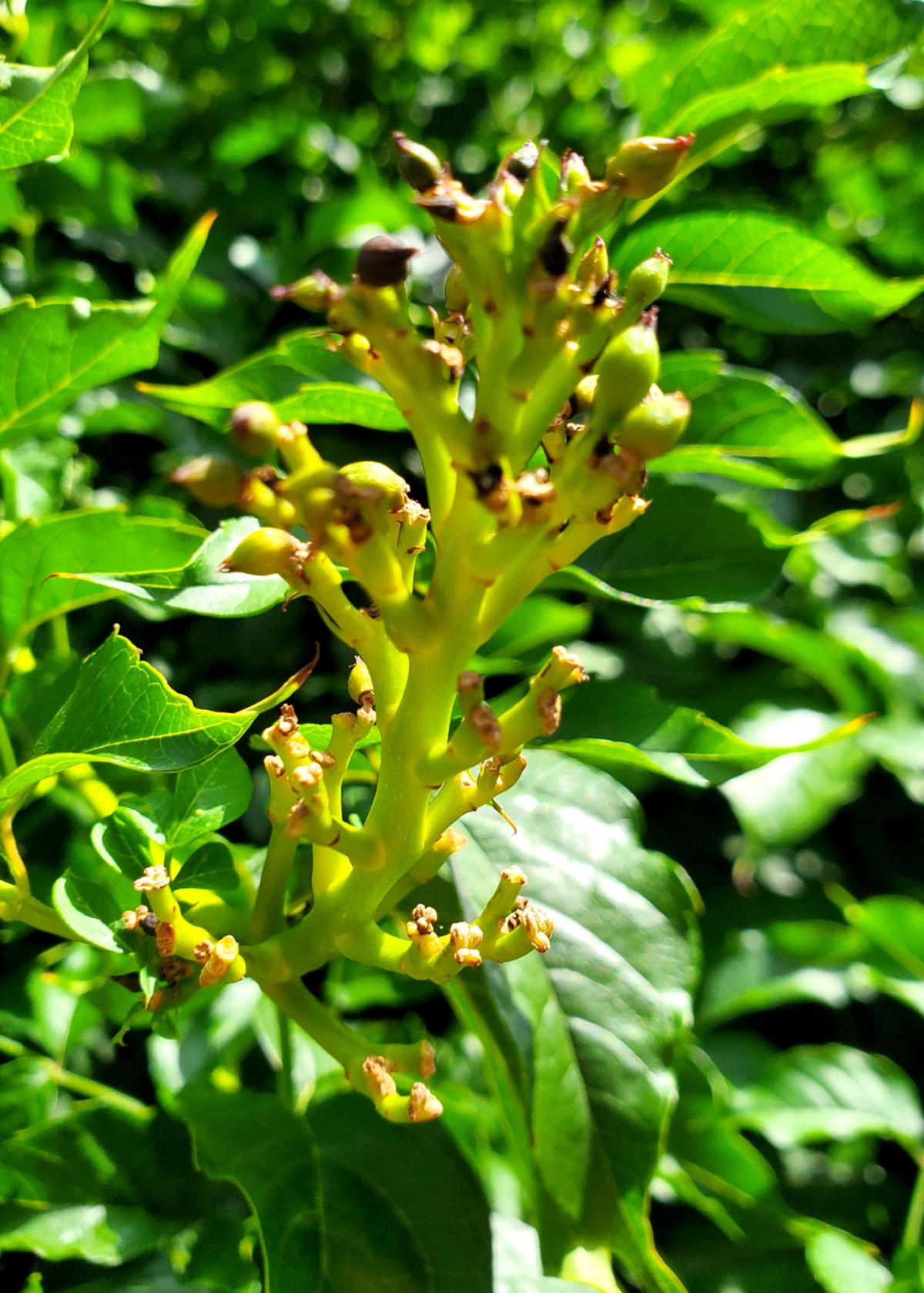 The flowers are likely dropping due to the rapid changeover from the rainy, fairly cool weather of spring and early summer to the suddenly very hot weather in many parts of Texas. 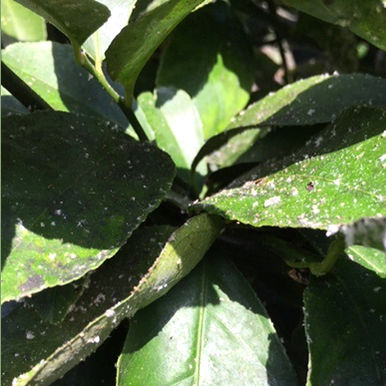 Scale insects are a common visitor to citrus. They are very difficult to eliminate and secrete a sticky honeydew residue. The black mold growing in it is relatively harmless. 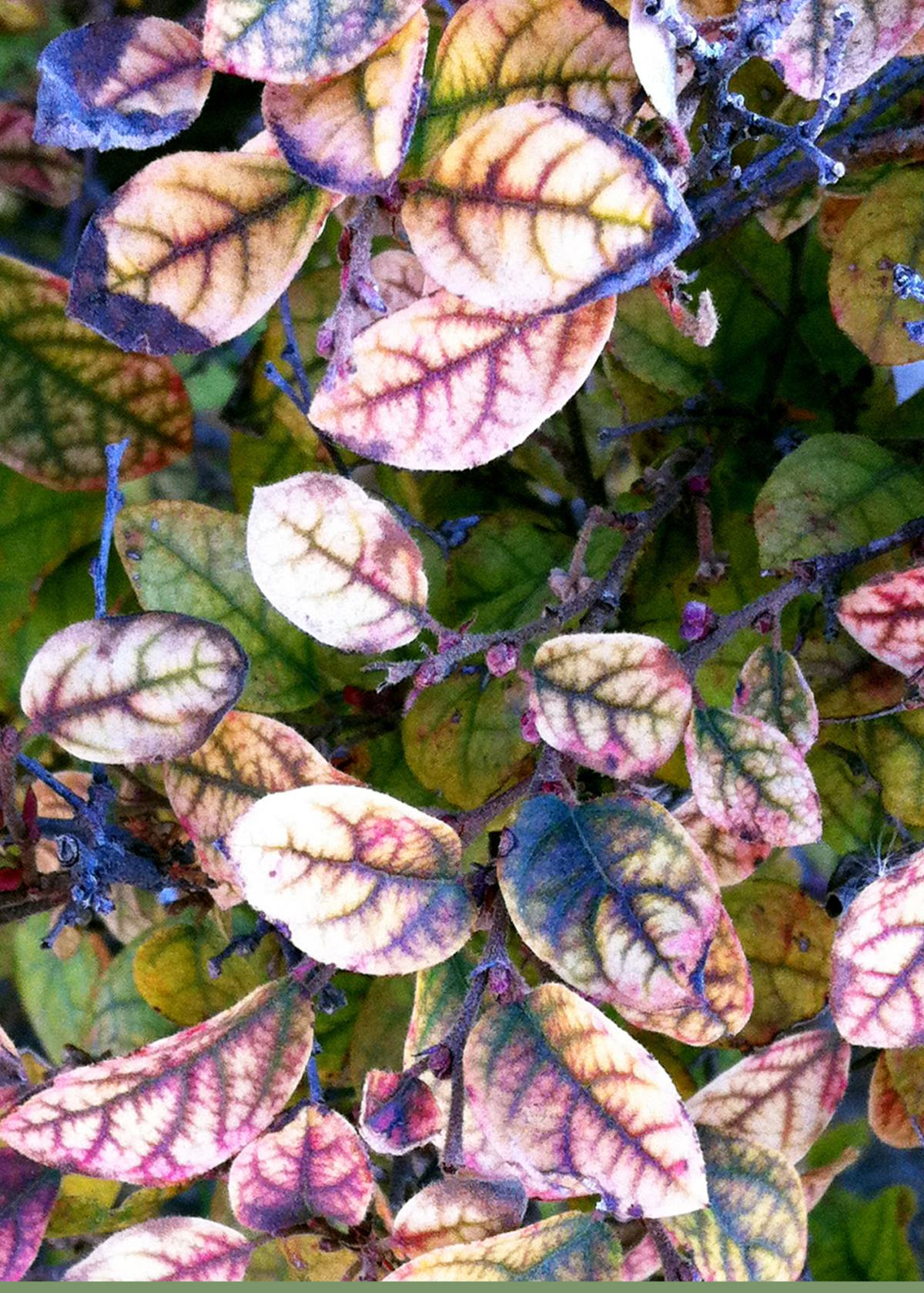 Loropetalums are not adapted to alkaline conditions and develop severe iron deficiencies after six or eight years.

Herbicide will not do much against smilax briar. Digging it out by hand when the soil is wet is a good way to remove them.

This Eve's necklace tree may be affected by cotton root rot or some other lower trunk problem.

The flowers are likely dropping due to the rapid changeover from the rainy, fairly cool weather of spring and early summer to the suddenly very hot weather in many parts of Texas.

Scale insects are a common visitor to citrus. They are very difficult to eliminate and secrete a sticky honeydew residue. The black mold growing in it is relatively harmless.

Loropetalums are not adapted to alkaline conditions and develop severe iron deficiencies after six or eight years.

A: That’s smilax briar. Mow it or cut it off at the ground. That will eliminate almost all of it. I got rid of probably 98 percent of seven acres of it by hiring someone to mow property we had just bought before we built our house more than 40 years ago. It has very large tubers and extensive, woody roots. As a result, herbicides don’t do much good on it since it has such glossy leaves and so few of them. I don’t even bother to spray it. I dig out the tubers by hand when the soil is very wet. It’s a quick and easy task with a sharpshooter spade, and it works 100 percent of the time.

Dear Neil: Can my Eve’s necklace be saved? The photo is from a couple of weeks ago after all the rain we had earlier in the spring and summer. Those leaves have since dropped.

A: That doesn’t look good. The rains would have contributed to this only if the tree is in a low, waterlogged spot. I really suspect there’s something else going on, perhaps cotton root rot or some other root or lower trunk problem that we can’t see in the photo. Time will tell, but I’m very concerned on your tree’s behalf. At these temperatures, you’ll know pretty quickly.

Dear Neil: I need to raise the canopy of my giant crape myrtle so I can work beneath it. When can I do that?

A: You can prune crape myrtles in that fashion at any time, but I think mid-winter is the best time. You can see the entire branch structure then, so you can best see where to make each cut. Don’t leave any stubs. Each cut should be flush with the remaining trunk or branch. That will discourage new shoots from being produced.

Dear Neil: I’ve been really happy with our Jerusalem sage plants until this year. They got too tall, so I trimmed them back. This year, their bloom has been sparse, as have the leaves. The plants have looked wilted as well. What would cause that?

A: Several landscapes I walk and drive by frequently have Jerusalem sage plantings, and this spring and summer haven’t been very showy for them, either, so it may not just be your plants. They need half a day or more of sunlight, two or three spring and summer feedings and regular deep waterings to keep them going. That’s pretty much what you’d give most other perennials. Other than that, I know of nothing special you would need to be doing. I’d watch them next spring. If the plants come up vigorously you should be fine. Otherwise, it may be time to rework the bed.

Dear Neil: Why is my sumac dying? It does get watered with a sprinkler system.

A: I have been in several Texas landscapes this summer where cotton root rot appeared to be killing sumacs that had been planted as a part of a native plant garden. I wouldn’t have expected a native tree like sumac to be, but apparently it is.

Dear Neil: My trumpetvines’ flowers are dropping before they open. What would cause that? My hummingbirds are missing them.

A: It is probably due to the rapid changeover from rainy, fairly cool weather of spring and early summer to the suddenly very hot weather many parts of Texas started encountering a month or so ago. It seemed more abrupt than usual. Hopefully you’ll see another round of blooms starting up soon.

Dear Neil: My Meyer lemon is covered with an insect I’m told is scale and with diseases. What should I use to eliminate them?

A: That’s a bad outbreak of scale insects. They’re common visitors to citrus. It’s always best to watch for them and to step to your plants’ rescue when you first see them, before the problem gets out of hand. There is a good write-up on scale insects in general from Iowa State University. It can be found at hortnews.extension.iastate.edu/scale-insects, but don’t expect it to give you a rapid path to total elimination. Scales are very difficult to eliminate. They secrete a sticky honeydew residue, and the black mold that you’re seeing is growing in that. Although unsightly, it’s relatively harmless.

Dear Neil: We planted fringeflowers eight years ago thinking they would look great against our house. The contrast was perfect for two years, but they have lost their rich purple color since. What can I do to restore them?

A: I couldn’t open the photos you attached but I’ll bet I’ve seen them scores of other times. I’ve put loropetalums on my personal “never again” list for where I garden because they’re just not adapted to the soil there. In alkaline conditions they develop severe iron deficiency after six or eight years. Leaves lose their purple color, changing to yellow with dark green veins, then almost pure white. You can add iron and a sulfur soil amendment and gain a few more years, but eventually you’ll want to replace them. Folks lucky enough to have acidic soils where azaleas and hydrangeas thrive, by comparison, will get along fine with fringeflowers.

Dear Neil: I have about a dozen large holes in my yard, perhaps the size of quarters. I did …

Dear Neil: Are my knockout roses diseased? They have really thorny stems, as you can see in …

Dear Neil: In doing some trimming last week, I removed a branch from low on the trunk of a tree. I found a hollow core filled with “goop.” It …

Dear Neil: What is this very fine webbing that is all over the trunk of my live oak?