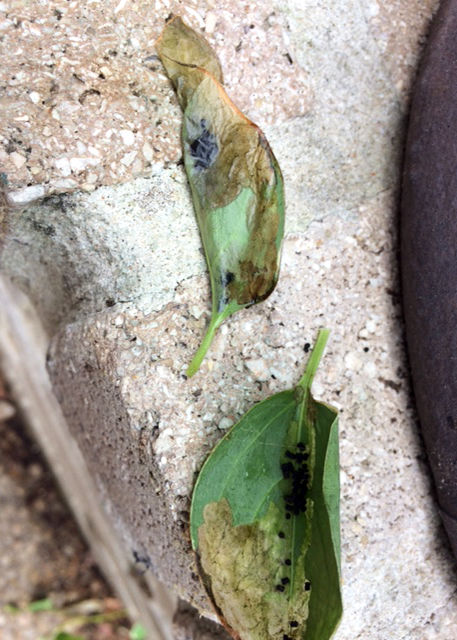 Leafrollers can be removed by applying a systemic insecticide Imidacloprid as a soil drench. 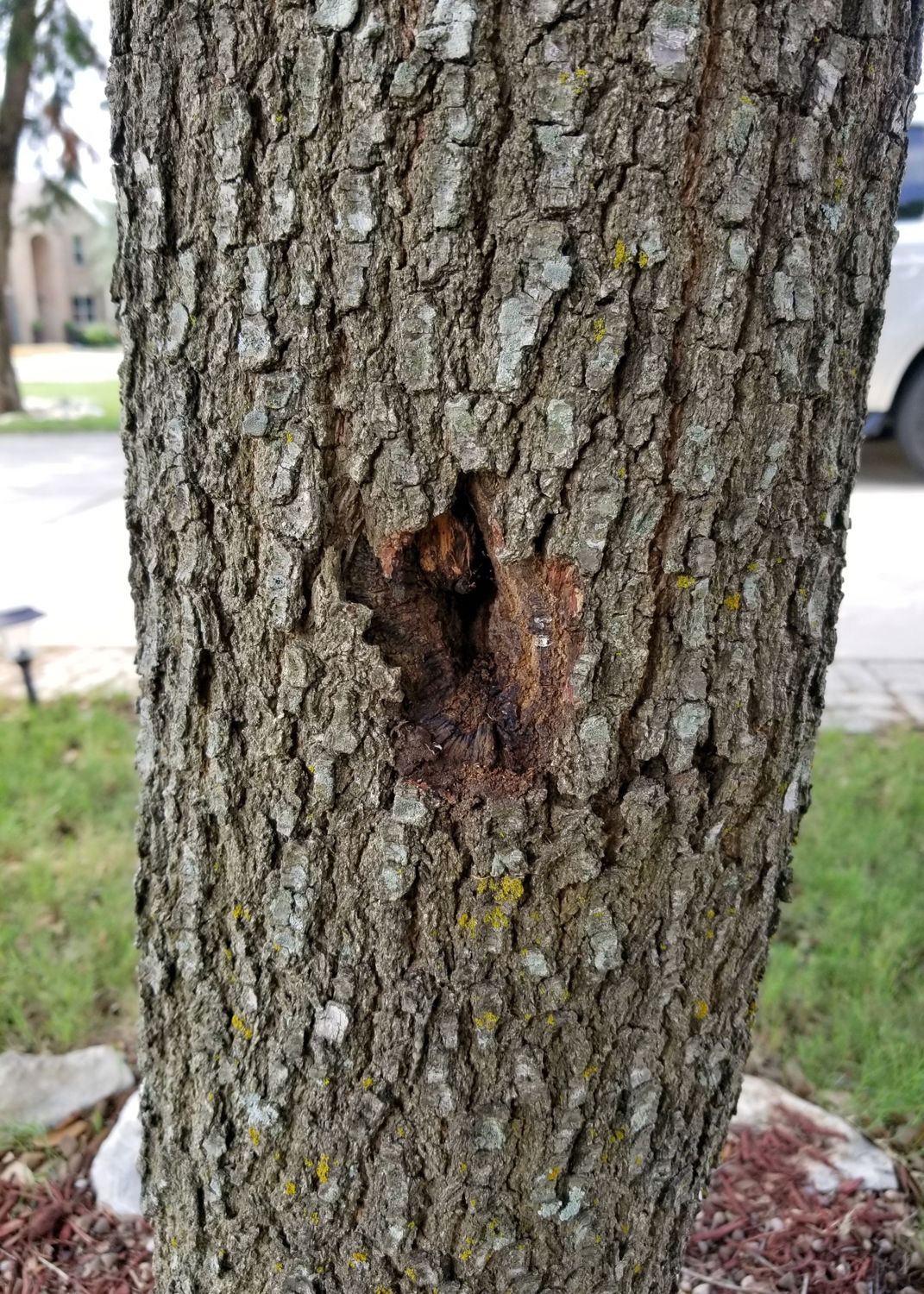 The dead branch could have decayed back into the trunk, leading to the decay slowly spreading into the wood. 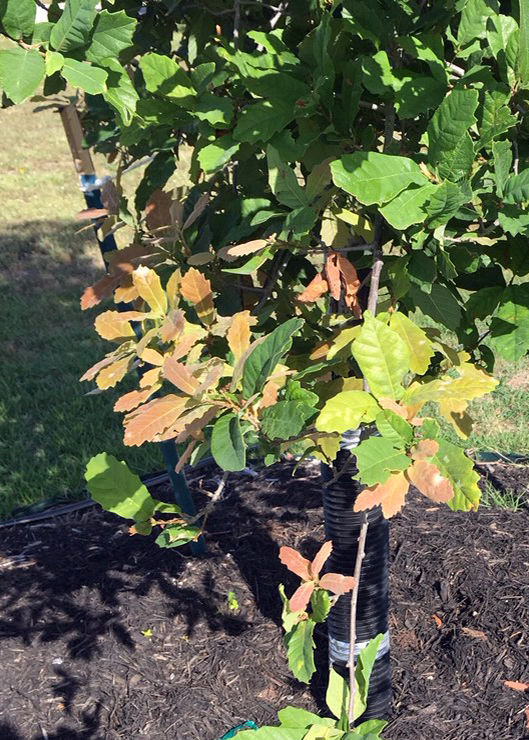 This discoloration is likely a minor and temporary nutrient deficiency that has probably already evened out. 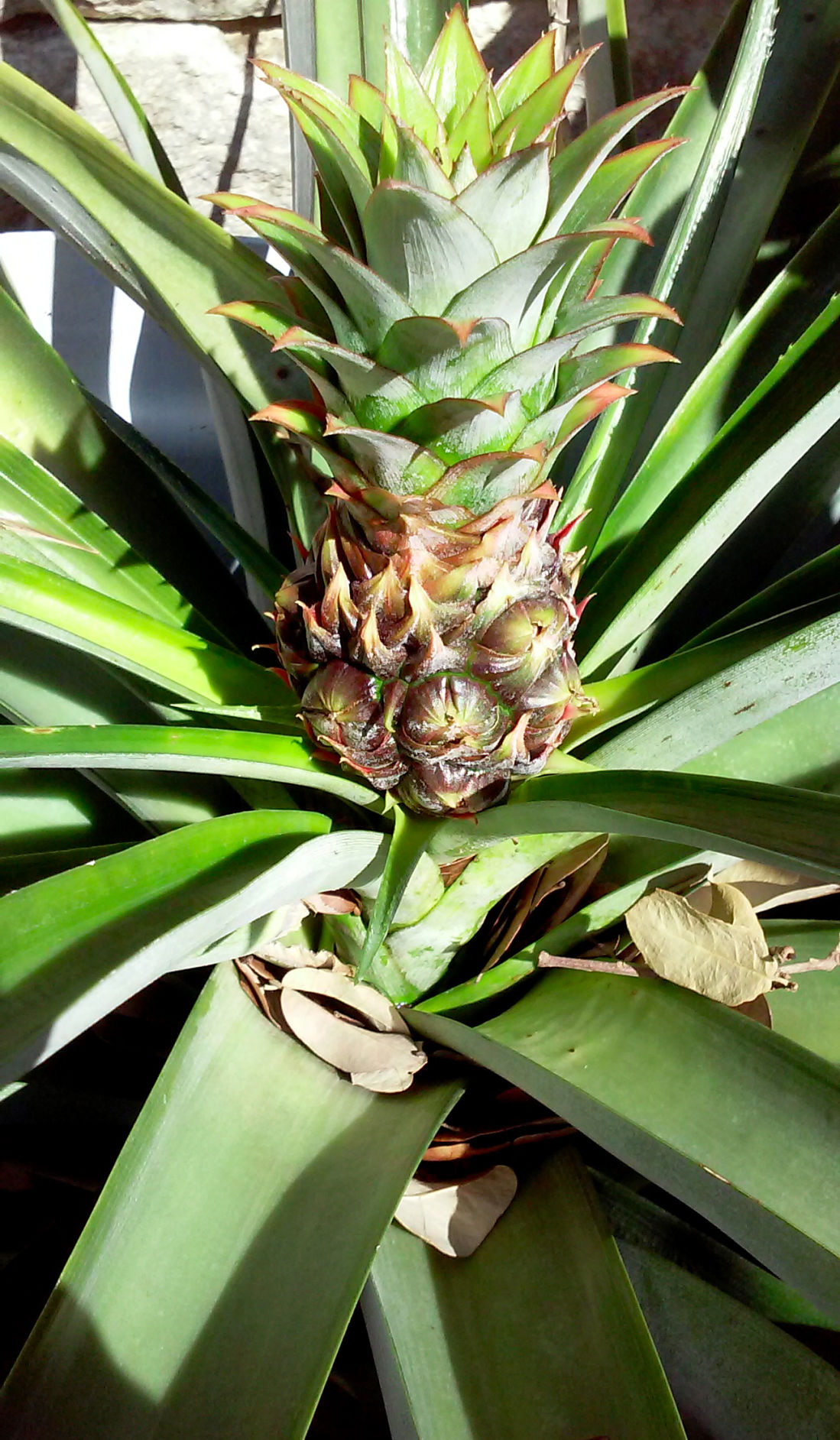 The baby pineapple will never get bigger than fist size and will turn a golden yellow when ripe.

Leafrollers can be removed by applying a systemic insecticide Imidacloprid as a soil drench.

The dead branch could have decayed back into the trunk, leading to the decay slowly spreading into the wood.

This discoloration is likely a minor and temporary nutrient deficiency that has probably already evened out.

The baby pineapple will never get bigger than fist size and will turn a golden yellow when ripe.

Dear Neil: We are growing a plant that was just lovely until some insect attacked it and put what appeared to be its eggs inside the leaves. What is the remedy to save our plant?

A: This is a leaf-rolling or skeletonizing type of insect that actually seems to be feeding within the leaf tissues. I would suggest applying a systemic insecticide Imidacloprid as a soil drench, but apply it next year about three weeks earlier than you saw the damage this year. Use it now to slow and stop further damage.

Dear Neil: The live oak along our drive is developing a small hole as if something has hit it. I’ve pulled a bit of the bark out of the way so the inside would be more visible. Can you tell what I should do? The roots are also pushing bricks up in our driveway. I’m going to have the bricks cut so they’ll be level.

A: This looks like there might have been a small branch that died years ago and was not removed properly. It decayed back into the trunk, and that decay has spread slowly into the wood of the trunk. The tree may be able to wall it off, but I would have a certified arborist look at it. Don’t peel any more bark off. I see some dark holes to the left and right even with the bottom of the hole. I hope those are woodpecker holes and not evidence of decay beneath that bark as well. The arborist will be able to tell. As for the roots, you’ll buy a little bit of time by cutting the bricks, but probably not more than a couple of years. Live oak roots grow very large very quickly.

Dear Neil: We have a young Monterrey oak that has grown well. Recently, however, it has developed browned leaves near its bottom. I’m wondering if that is a disease.

A: That’s absolutely not a disease. It all appears to be on the newest growth, and most does appear to be at the bottom of the plant. If anything, I would assume it to be a minor and temporary nutrient deficiency that has probably already evened out. I see this on other Monterrey oaks. It doesn’t look out of the ordinary. You could apply a high-nitrogen fertilizer with a minor elements “package” built into it. Otherwise, your tree looks terrific.

Dear Neil: About two years ago I planted a pineapple top. Now it has its own baby pineapple. Will it develop into an edible fruit? How will I know when to harvest it? It’s been fun to watch it develop.

A: Thanks for sharing your success with us! Well done! It will never get bigger than fist size, but it will continue to be a novelty for many months. When it is ripe it will turn a golden yellow, then later (past-mature), it will become soft and golden orange. I guess you could try starting a third generation from its top, although I never have. The mother plant will die as the fruit matures. Sad as it is, it’s nature’s way. You’ll get several new offsets (“pups”) that will sprout up around it. They can be divided and planted individually.

Dear Neil: My neighbor’s mondograss (“monkeygrass”) has invaded my fescue lawn in the Panhandle. (I read you online.) Nurseries offer me little hope. Can you give me ways of stopping it?

A: You can some degree of control using a broadleafed weedkiller containing 2,4-D. It kills the non-grassy plants without harming your lawngrass. But the biggest help would be to put some type of edging into the ground to keep it from getting past your property line. I use baked enamel metal edging to line my landscape beds, and I drive it virtually flush with the soil, but I’m not sure you would want that across an expanse of lawn area where kids play or people could stumble. You could bury some type of decay-resistant wood or a vinyl product — anything to keep the mondograss roots from spreading.

Dear Neil: We have bought rural acreage and are building a home. We have clumps of small trees and oaks that I am going to incorporate into our final landscape. What can I use to kill the brush and weeds beneath the trees that won’t harm the trees? Then, what is a good shade-tolerant groundcover I could plant beneath them?

A: Start by trimming out all of the brush you can possibly remove with a line trimmer. Be mindful not to work around poison ivy, and don’t touch the trunks of your trees and good shrubs with the line from your trimmer. Most of the brush will not resprout from being cut down. If any does, apply a glyphosate-only herbicide to it as a spray. If any survives that treatment as well, put a roll-type mulch over it for a couple of months as your house is being built, to block out the sunlight and smother it out. As for the groundcover, since you won’t want to do a huge amount of rototilling around all the tree roots, I’d suggest planting something that will clump and sprawl on its own. Liriope would be attractive, and wood ferns would be, too. In South Texas, ardisia is beautiful, but it’s too tender farther north where temperatures drop below 20. The same would apply to cast iron plant if you need something taller — good in South Texas and too tender in North Texas. Purple wintercreeper would do well anywhere in the state, and it seems to spread without a lot of formal bed preparation.

Dear Neil: Is there one surefire control for worms that devoured our cabbage, herbs, cedars and little oak trees this spring? I tried several insecticides and nothing seemed to work.

A: Use the biological worm control known as Bacillus thuringiensis, or “B.t.” for short. It’s the only thing that’s effective on looping types of caterpillars such as cabbage loopers, and it does a great job on all other types of caterpillars as well. Speaking specifically about bagworms on junipers, cedars, cypress and other cone-bearing plants, you must treat while they’re still actively feeding.

Dear Neil: While we were traveling around in North Texas a few weeks ago, we saw large field…

Dear Neil: We planted several East Palatka hollies at our property in East Texas in October.…

Dear Neil: My wife and I like to make our own compost to amend the soil in our vegetable gar…

Dear Neil: We have alkaline soil and heavy shade. Cotton root rot has become a real problem. What can I plant beneath our live oaks that will …

Dear Neil: I have property in South Texas and am looking for a plant that won’t have to be mowed. It’s a large property, and mowing takes two …

Dear Neil: Are my knockout roses diseased? They have really thorny stems, as you can see in my photos.

Dear Neil: I have about a dozen large holes in my yard, perhaps the size of quarters. I did see one large beetle, but I couldn’t get a photo o…