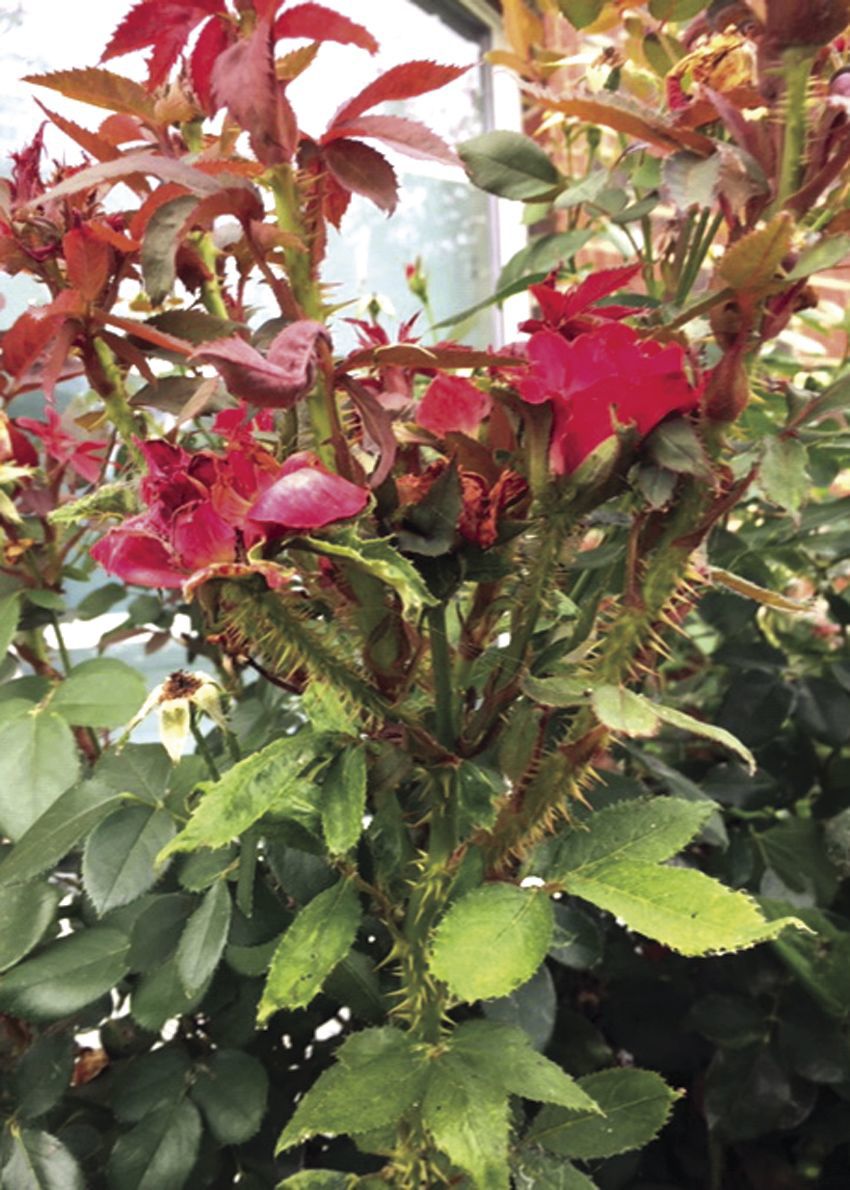 Plants affected by the rose rosette virus need to be removed immediately. The virus is spread by a microscopic, wind-driven mite. 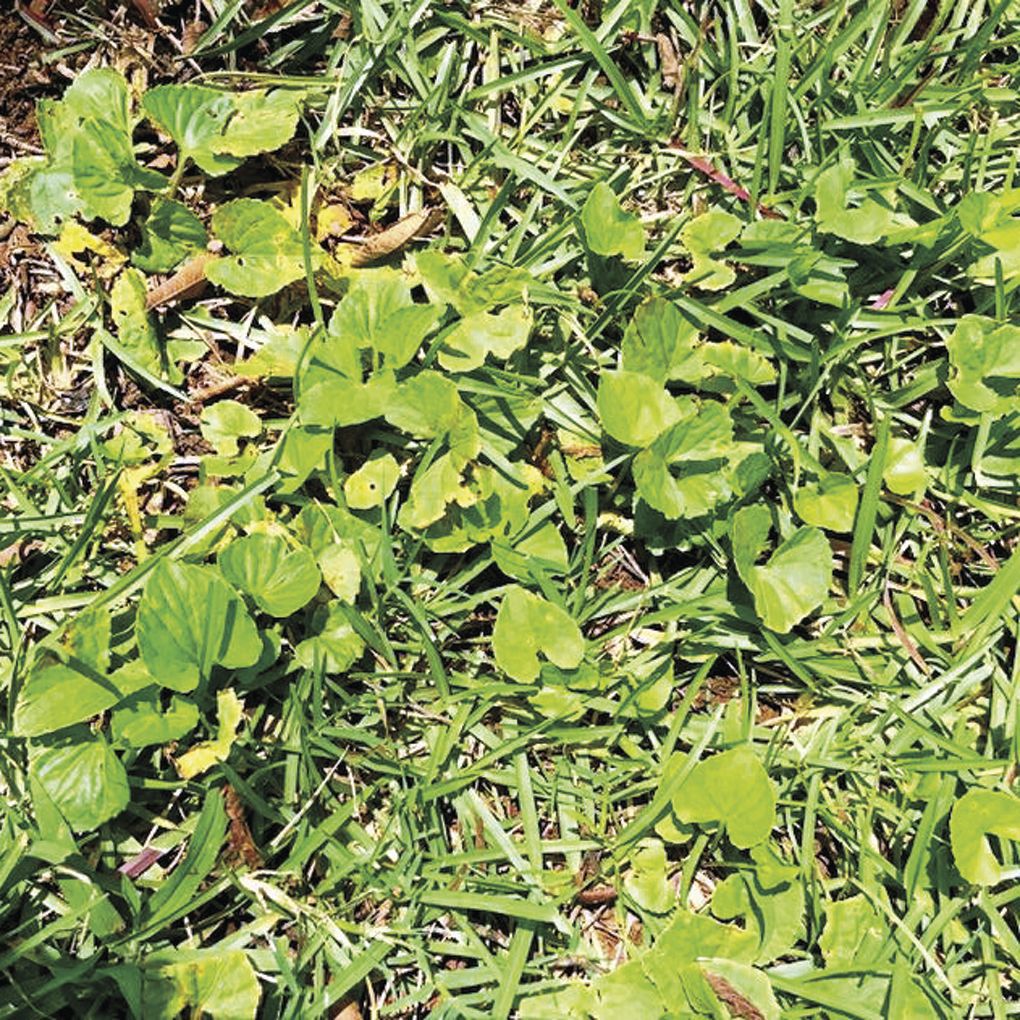 One drop of liquid dishwashing detergent per gallon of weedkiller spray will help the spray adhere to  leaves instead of beading up and rolling off the funnel-shaped surfaces. 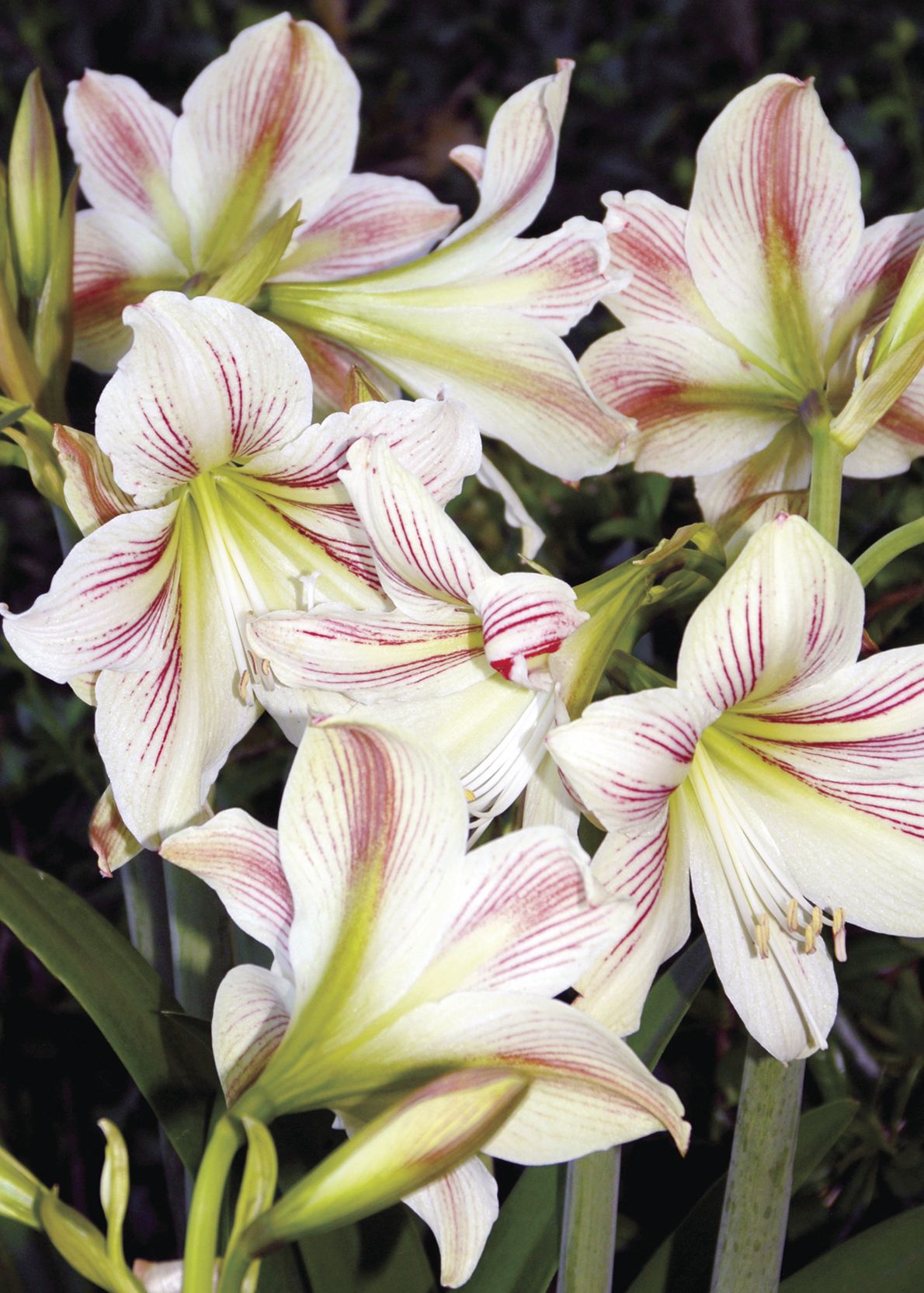 Let the Christmas amaryllis grow until the middle of August. Lay the pots on their sides, then let the plants dry up completely. repot them into fresh potting soil and start watering again. They should come back and flower between Thanksgiving and Christmas. 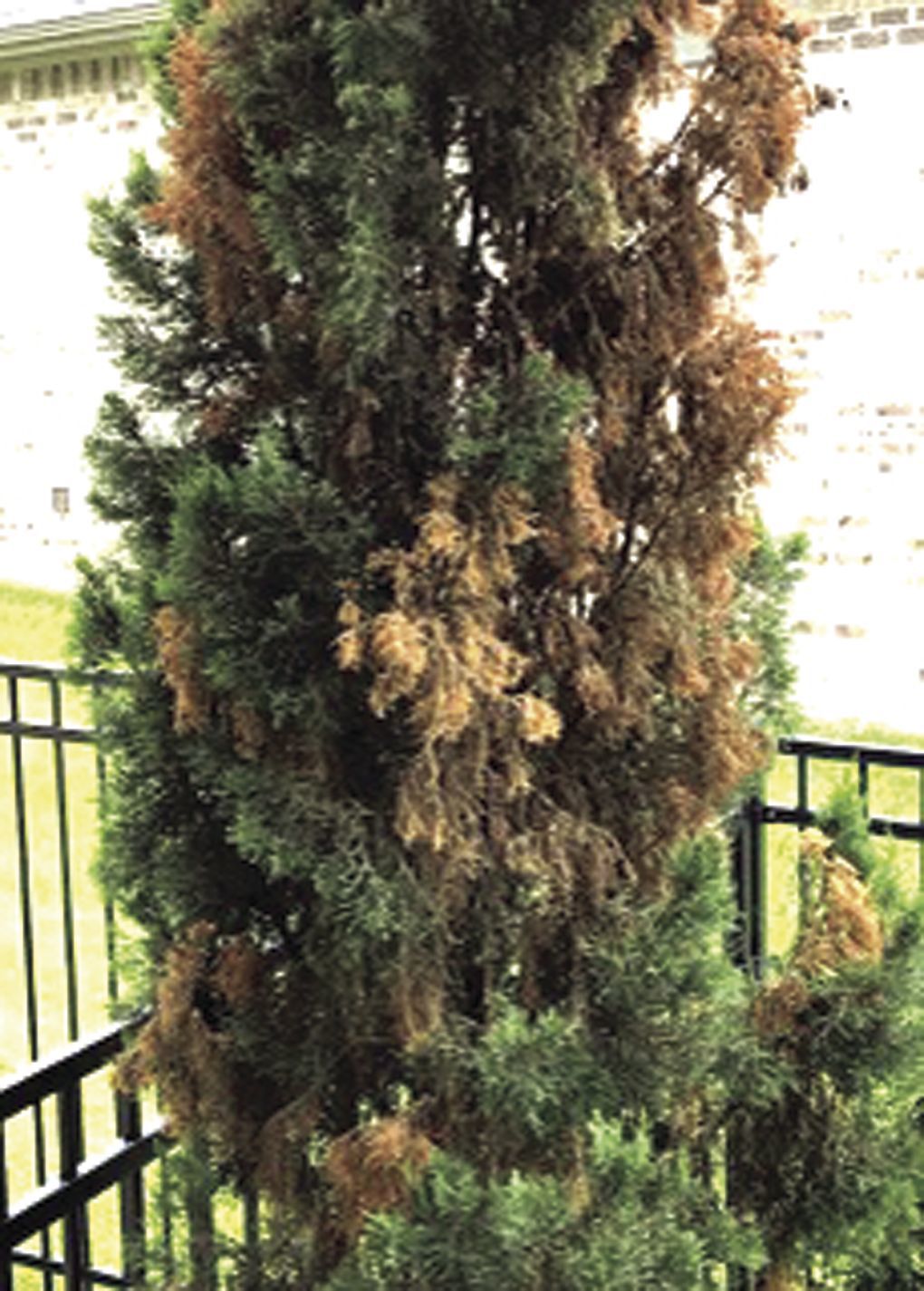 The pathogen that attacked the cypress is called Seiridium canker. The best bet would be to turn instead to upright shrubs or small trees such as Oakland hollies or Teddy Bear magnolias.

Plants affected by the rose rosette virus need to be removed immediately. The virus is spread by a microscopic, wind-driven mite.

One drop of liquid dishwashing detergent per gallon of weedkiller spray will help the spray adhere to  leaves instead of beading up and rolling off the funnel-shaped surfaces.

Let the Christmas amaryllis grow until the middle of August. Lay the pots on their sides, then let the plants dry up completely. repot them into fresh potting soil and start watering again. They should come back and flower between Thanksgiving and Christmas.

The pathogen that attacked the cypress is called Seiridium canker. The best bet would be to turn instead to upright shrubs or small trees such as Oakland hollies or Teddy Bear magnolias.

Dear Neil: Are my knockout roses diseased? They have really thorny stems, as you can see in my photos.

A: Your plants have the fatal rose rosette virus and need to be removed immediately. Rose rosette is spread by a microscopic, wind-driven mite, and the longer you leave any part of these plants in place, the more likely you are to be spreading the disease. You’ll need to wait a year or two to replant — if then. There is no preventive nor any cure for this virus.

Dear Neil: What can I use to control this weed? One lawn care company suggested a broadleafed weedkiller, but that only seemed to make it angry. It seems to prefer the shady areas.

A: They were correct in recommending a broadleafed weedkiller. I would suggest that you add one drop of liquid dishwashing detergent per gallon of spray that you mix. That will help the spray adhere to the leaves instead of beading up and rolling off the funnel-shaped surfaces. Use a tank sprayer, and adjust the nozzle so it applies a fairly fine spray. Apply it directly to the weed’s leaves, taking care not to get it all over your lawngrass and not to saturate the soil. Repeat in two weeks as needed.

Dear Neil: How should I care for amaryllis bulbs so they will bloom again next year?

A: Hmm. As late as it is in the growing season, I’m wondering if you’re talking about St. Joseph lilies (also known as “hardy amaryllis”) or the amaryllis we get at Christmas. With St. Joseph lilies, just leave all of their foliage in place until frost. Then you can trim off the browned leaves. If you’re talking about the Christmas amaryllis, let them keep growing until the middle of August. Lay the pots on their sides, then let the plants dry up completely. Repot them into fresh potting soil and start watering them again. They should come back and flower between Thanksgiving and Christmas.

Dear Neil: What is wrong with my Italian cypress? I have another one 50 feet away that still looks perfect.

A: This is a plant pathogen called Seiridium canker. It has attacked Leyland cypress, Italian cypress and even Arizona cypress across Texas over the past 10 years. I wish I could offer you a remedy, but there isn’t one, especially when it has reached the proportions I see in your photo. Even columnar junipers have similar disease issues. Your best bet will be to turn to upright shrubs or small trees such as Oakland hollies or Teddy Bear magnolias. They won’t be anywhere near the same in appearance, but they’ll get you away from the disease. And before I close the book on your cypress, you may want to check it for spider mites. Thump one of the declining stems over white paper and look for nearly microscopic specks to start moving. If you find them, watch your other plant for them and spray at first evidence. This plant probably cannot be saved.

Dear Neil: The city recently replaced a streetlight that had a rather pale yellow cast with an LED light with a bright white hue. It is probably three times the illumination. Will that be of any concern for esperanzas, vitexes, Turks caps, lantanas, cedar elms, oaks or several other plants I have growing there by messing up their light/dark cycles?

A: As far as I know, none of those plants is “photoperiodic.” That’s the term botanists use to refer to plants that measure the length of the dark period to determine when they need to come into flower. If you had mentioned mums, or if you were a greenhouse grower with Christmas cacti, kalanchoes or poinsettias, I would be much more concerned for you. Some of the perennials that bloom in the fall might also be photoperiodic, but on the whole, I don’t think you’re going to have any problem.

Dear Neil: My daughter brought home greenhouse plants from her high school horticulture class three years ago. They had mealy bugs, and since then I’ve had an ongoing battle with my outdoor plants from potted plants to shrubs. What can I use to eliminate them? I try to use organic controls, but they haven’t worked.

A: Mealy bugs are some of our most difficult insects to eliminate, especially when they have a head start on us. I use cotton swabs dipped in rubbing alcohol to wipe off the majority of the mealy bugs on my houseplants. But for serious outbreaks I know I have to use a systemic insecticide to rid my plants of the pests. They’re horrible. Commonly you’ll need more than one treatment. The young mealy bugs are usually hiding beneath the larger ones.

Dear Neil: Will bluebonnets come up in a field that currently has thick bermudagrass, or do I need to kill it first?

A: Bluebonnets do not compete at all well with bermudagrass. I wouldn’t necessarily kill the bermuda until you’re really sure you want to do that. Remember that bluebonnets bloom for 2-3 weeks and then they die out until the next spring. Plus there’s the potential issue of erosion. You might be better off starting with a bed of manageable size so you can convert back over to grass if the bluebonnets aren’t to your liking.

Dear Neil: I have a vine growing within my Asian jasmine groundcover. Is there a weedkiller I can use to kill it that won’t harm the jasmine?

A: I’m not recommending this (because it’s not on the label), just commenting. Glyphosate herbicides, when applied at spraying strength, will usually kill random vines without harming Asian jasmine. Of course, do your best to keep it away from the jasmine. Try a small area first. Spot-treat with a precise spray pattern.

Dear Neil: We are growing a plant that was just lovely until some insect attacked it and put…

Dear Neil: While we were traveling around in North Texas a few weeks ago, we saw large field…

Dear Neil: I have about a dozen large holes in my yard, perhaps the size of quarters. I did see one large beetle, but I couldn’t get a photo o…

TEXAS GARDENING: Herbicides don't do much good against smilax briar