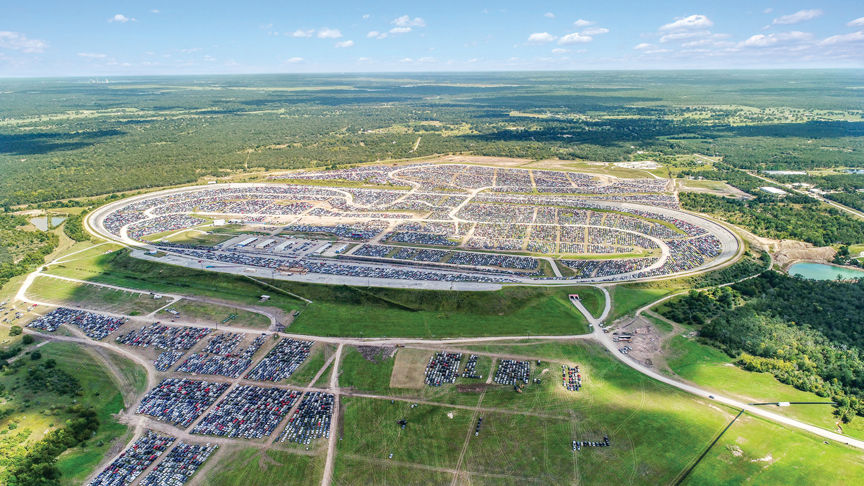 Aerial photos taken by drone and spread on social media catch the sea of hurricane-damaged cars at Texas World Speedway — likely at its peak, says Bill Mather, president and CEO of operations for the speedway. 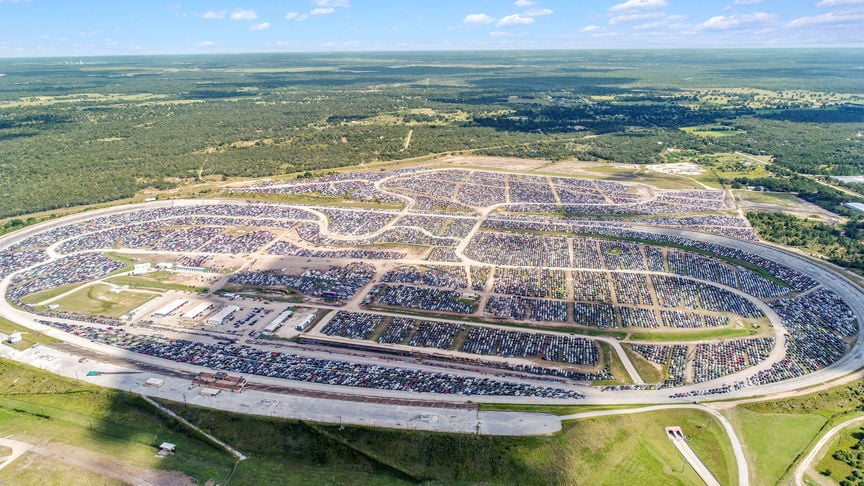 Aerial photos taken by drone and spread on social media catch the sea of hurricane-damaged cars at Texas World Speedway — likely at its peak, says Bill Mather, president and CEO of operations for the speedway.

Larry Field typically uses his drone to takes photos of real estate, but last week he turned his attention to the Texas World Speedway after hearing that the closed race track -- one of the largest in the state -- is now home to cars flooded by Hurricane Harvey.

The thousands of cars on the speedway property are about 10 percent of the Harvey-flooded cars awaiting assessment by insurance companies. Tow trucks have been delivering vehicles to the speedway for weeks, and Field said he was curious to see how the property had transformed.

"I was pretty surprised that they had filled the entire speedway and were starting to fill the outer areas, too," the College Station resident said.

An Eagle reporter was turned away at the track's front gate last month after learning about the activity on the property.

Field was not alone in curiosity. His images were posted Friday and quickly made the rounds on social media. Bill Mather, president and CEO of operations for Texas World Speedway, joked that drones over the speedway were like flies.

The drones have likely captured photos of the Texas World Speedway activity at its peak, Mather said, noting vehicles are leaving the facility every day.

Mark Hanna, a spokesman for the Insurance Council of Texas, said the flow of cars to holding facilities like the Texas World Speedway has slowed down, too. The group estimates that owners of 90 percent of the flooded cars with comprehensive coverage already have gotten an insurance check.

Mather said he's unsure how many cars are on the site, but the speedway agreed to hold around 33,000 cars awaiting processing. Based on the ICT estimates, that means just over 10 percent of Harvey-flooded vehicles with comprehensive insurance reside in College Station.

"It's quite crazy if you think about all the cars that were affected -- all the families that were affected," Mather said, adding that the number of vehicles coming through College Station "gives you an idea of the magnitude of the relief efforts that we don't feel the effects of from here."

The cars at Texas World Speedway will likely be gone by the end of February, Mather said. The lease agreement with Copart, the company overseeing operations, was for six months, with an option of a two- to three-month extension.

The space is simply a "cold lot," Mather said. Vehicles are not being scrapped; they are just using the speedway as a pit stop.

From the speedway and other impromptu processing centers, the cars will head to auctions and scrap yards.

Some may even head to Hollywood. Hanna said he had a call from a someone with Sony Pictures looking for stationary cars to appear as extras in a new Marvel movie.

"They could look brand new depending on the make and car they buy," he said. "And there is every make and model out there."

While they're in College Station, however, Mather asks that drone owners looking to capture photos ask first -- he says it's private property, after all, although he acknowledges that it's a hard policy to enforce.

In Houston, low-income residents struggle after losing vehicles in floods

The Eagle’s best work from the Texas APME awards

With four residents and about 30 houses under construction, Southern Pointe Community is starting to take shape, about a decade after talk of …