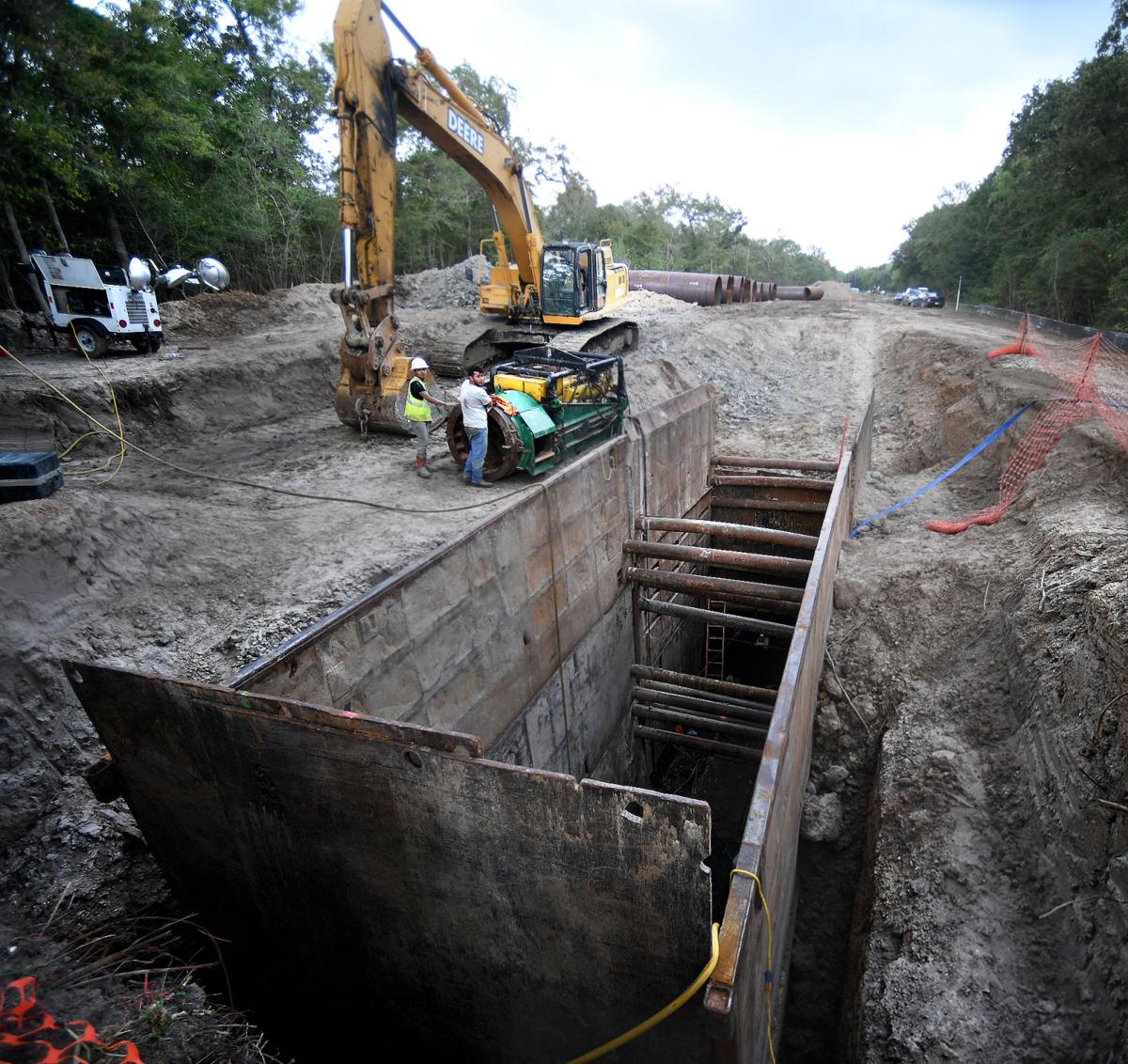 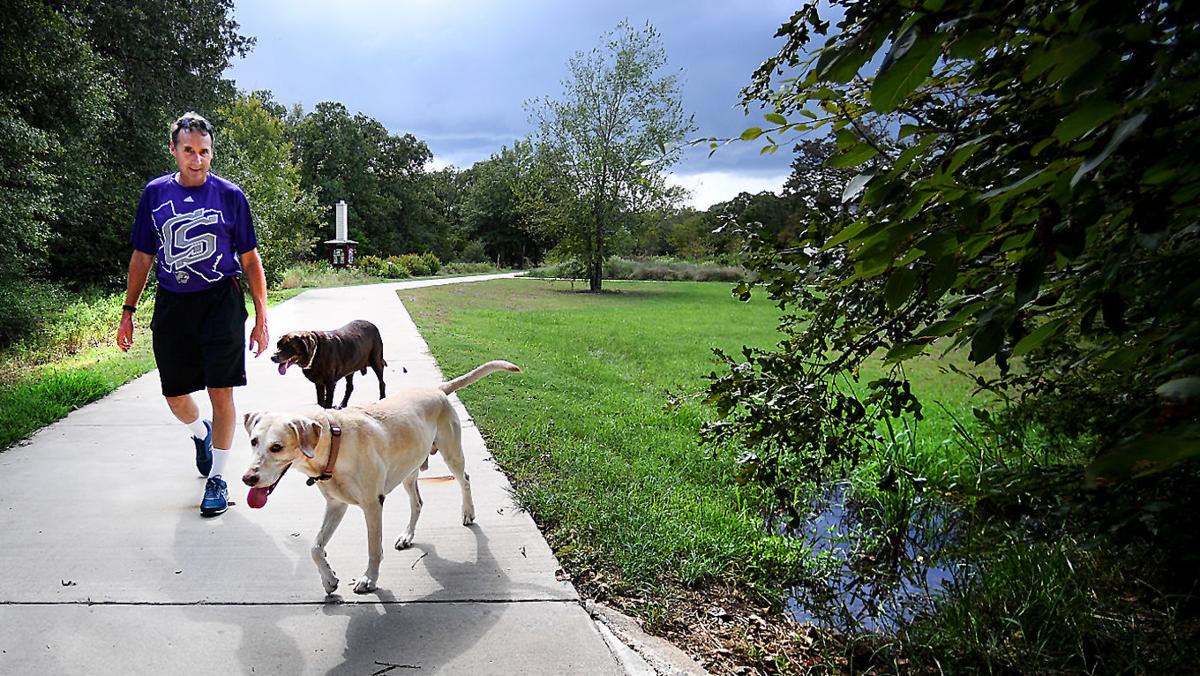 Dan Bittiol makes his way toward the parking lot after walking with his dogs at Lick Creek Park in College Station. He says he walks everyday there, often twice, but his walks have been shortened considerably by construction at the park.

The nearly two-and-a-half mile long line required workers to clear anywhere from 10 to 80 feet of space along different areas of the trails. Before the area was designated as a park in 1987, there were already sewer lines running through it to connect with the treatment plant, Parks and Recreation Director David Schmitz says.

Dan Bittiol makes his way toward the parking lot after walking with his dogs at Lick Creek Park in College Station. He says he walks everyday there, often twice, but his walks have been shortened considerably by construction at the park.

The nearly two-and-a-half mile long line required workers to clear anywhere from 10 to 80 feet of space along different areas of the trails. Before the area was designated as a park in 1987, there were already sewer lines running through it to connect with the treatment plant, Parks and Recreation Director David Schmitz says.

The $11 million project, which included the recent clearing of some park trees and other plants, affects 2 percent of the 500-acre nature site. The new lines will be parallel to the 32-year-old 18-inch ones that are currently under the Deer Run and Raccoon Run trails at the park. The existing line will be abandoned but remain in place for possible future use.

The construction is alarming to some residents including Rio Brazos Audubon Society member David Scott, who said he doesn’t begrudge College Station residents’ access to basic services like sewer and water. Rather, he is concerned about the location of the pipeline, which he thinks should have been installed around the park to avoid disturbing animal habitats and plant life.

“This is the kind of place where you can immerse yourself in a natural area,” Scott said. “There’s a diversity of habitats there. … To pillage the only place of its kind within an hour drive is just heartbreaking.”

Director of Water Services Gary Mechler said installing the line around the park would increase the cost by more than $20 million, effectively tripling the project’s overall price. Mechler said College Station’s rapid growth in recent years was the driving force behind the construction.

“The trunklines of the sewer system are large lines to convey wastewater to treatment plants and are as critical to our development as Highway 6,” Mechler said.

The nearly two-and-a-half mile long line required workers to clear anywhere from 10 to 80 feet of space along different areas of the trails. Michael Manson, a recently retired Texas A&M University biology professor and former president of Friends of Lick Creek Park, said any type of fragmentation of an environment can open the door to more invasive species.

Since Lick Creek Park is surrounded by residential areas, Manson said he used to advocate for it to be connected with other places such as Brazos Bottoms near Navasota so there would be a continuous corridor for animals to move through. If the park isn’t connected to a similar habitat, the biodiversity could significantly decrease.

“If you make a big cut in the middle of it, you divide it into two separate areas, which is not good for the biodiversity,” Manson said. “I suspect this is less important for plants than it is for animals. My own particular interest and concern about this has primarily been with birds. There are several species of birds that are unusual in breeding in Lick Creek Park and they would be particularly susceptible to this type of fragmentation in their habitat.”

Before the area was designated as a park in 1987, there were already sewer lines running through it to connect with the treatment plant, Parks and Recreation Director David Schmitz said. Trails were built over the lines to make the most out of the situation.

“What a lot of people may not realize is the reason the trails are located where they are is because under them are the sewer lines running to the treatment plant,” Schmitz said.

But the park’s history with and proximity to the wastewater treatment plant has always given the two a unique connection, Water Resource Coordinator Jennifer Nations said.

“What’s interesting about Lick Creek Park and this particular wastewater treatment plant is that they’re kind of coexisting in this space,” Nations said. “Because it is a nature park, there has never been a very clear delineation between where park land stops and where wastewater treatment property begins.”

But the placement is typical for a wastewater treatment plant, assistant director of Public Works Emily Fisher said. Since sewer lines use gravity, many treatment plants are located in low areas such as creeks.

An environmental study was done before the construction began and Schmitz said the city’s course of action was determined as the most cost-effective solution that would have the least impact on the park’s environment.

Even so, Schmitz said the Parks and Recreation department will take action to rebuild areas that are damaged throughout the process by replanting native trees. He said the department will not replant brush such as yaupons because they are native and expected to grow back quickly.

Additionally, he said Friends of Lick Creek Park asked the department to use the construction as an opportunity to remove some invasive plant species such as chinaberry trees in the area.

Lick Creek is the only nature park in the city and Sandy Dillard, president of the Rio Brazos Audubon Society, said he also wishes the sewer line would have been built around it.

Before the project began, Dillard walked the property with Mechler to discuss the construction. Dillard said the conversations led him to believe that significantly less space would be cleared.

He said he’s particularly concerned because the construction went through important habitats for two types of warblers, which are a threatened species.

Moving forward, Dillard hopes there is more communication between College Station’s officials and residents and nature organizations — a goal he believes is attainable since he said there are city staff and councilmen working to keep them in the loop. Additionally, Dillard said he would like to make use of the treatment plant’s proximity to the park by creating a wetland area.

While Schmitz said it is always concerning when discussions about clearing part of the park’s environment begin, everyone has taken the task extremely seriously. Schmitz said he sees a silver lining because some of the trails needed to be rebuilt and this construction will allow that to happen.

He hopes his department’s efforts to replant trees and other plants in the cleared out areas will also benefit Lick Creek Park’s future.

“You always want it to go back to a natural state,” Schmitz said.

The College Station City Council on Monday unanimously approved a $13.8 million amendment to…

"installing the line around the park would increase the cost by more than $20 million, effectively tripling the project’s overall price. "

Were the environmentalists given the option of covering the extra $20 million out of their own pockets? I'm fine with going around as long as it doesn't cost me additional tax dollars. But I vote for people that won't waste my money. And this decision further solidifies by support for my incumbent representative.

There are a large number of us who aren't. Lick Creek Park is a jewel for the city. It's a wonderfully wooded area with trails for walking and hiking. It's also an extremely important wildlife habitat. I do think a better solution could have been found rather than the destruction of an extremely wide swath through the heart of it. People, Lick Creek Park is in danger. Housing is being shoved right up to the western edge of it and now we loose a significant portion because of the sewer line. The city had wisdom to create the beautiful new center with an amphitheater and meeting room, yet they ripped up the trees next to it for this project.

There are also a large number of you that complain about everything. Lick Creek Park will survive and remain a nice outdoor outlet for people who wish to visit it.

Most residents are fine with it— you can’t please everyone.