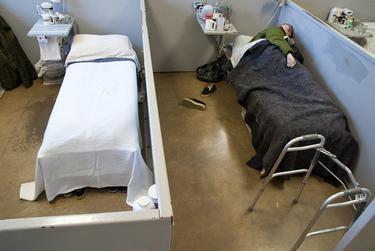 Dorm-style cubicles are the most common form of housing at the Pack Unit. Caleb Bryant Miller for The Texas Tribune

When two Texas inmates at a geriatric prison first sued the Texas Department of Criminal Justice over its handling of the coronavirus in late March, no inmates at the unit were confirmed to have been infected. In mid-April, when a federal district judge ordered TDCJ to implement a slew of protective policies, one infected inmate had died and no others were known to be sick.

But by the time the U.S. 5th Circuit Court of Appeals heard arguments in the lawsuit Thursday, after temporarily blocking the lower court's order, at least five inmates at the Pack Unit had died with the COVID-19 disease and nearly 200 more are confirmed to have the virus, according to the state's lawyer.

Due to the Pack Unit's recent surge in reported coronavirus cases, the federal appellate judges held Thursday's hearing a week earlier than it was originally scheduled. In their remote court hearing, they questioned both if state officials have done enough to protect high-risk inmates in a rapidly changing situation and whether the prisoners suing TDCJ followed the proper steps before heading to federal court.

The prisoners at the Pack Unit, a prison in Grimes County that has recently faced other federal litigation over stifling summer temperatures, have said TDCJ's policies are "woefully inadequate" to protect sick, older inmates. They also argue the agencies' actual practices are even worse and violate the constitutional protection against cruel and unusual punishment. In their lawsuit, they asked for more protective gear, cleaning supplies and social distancing.

TDCJ has so far successfully appealed the lower court's order to require more protective measures. But the agency has since enacted much of what the judge required in April anyway. That includes providing face masks and testing all the prison's inmates for the virus. One of the state's main arguments against the lower court's ruling is that the order restricts the agency's ability to adapt to the constantly shifting situation of a virus that health officials are still trying to understand. But inmates claim, and the district judge agreed, that court intervention was needed to protect them from the prison's apparent "deliberate indifference" to inmates' risk.

In Thursday’s hearing, Judge Eugene Davis asked the inmates’ lawyer to provide by Monday a list of new policies or procedures that might be needed — based on the evolved TDCJ response as well as the growing number of infections and deaths. The appellate judges weighed the evolving status of the case, and made critical remarks of both the prison system and the inmates.

Davis repeatedly raised questions of social distancing practices in the prison now that the infection has spread. Judge Stuart Duncan and Texas Solicitor General Kyle Hawkins countered that even the lower court judge’s ruling agreed social distancing is largely impossible in prisons and didn’t find the prisons were unconstitutionally withholding it.

“We now have approximately 200 inmates in the Pack Unit who’ve tested positive for the virus, and that mostly happened in the month of May,” Davis said. “So by the end of June, if you assume that without social distancing that number will increase to 500 or 600 cases….would the state’s answer be the same that there’s nothing they can do to spread out the prisoners to give them social distancing?”

At the Pack Unit, Davis and Judge James Graves noted, inmates largely live in dorm settings and each have a small cubicle. The cubicles have short, waist-high walls and the beds are less than six feet apart. One of the inmates said in an April court hearing that there was another dorm at least half empty where officials could have moved inmates to space them out. Hawkins said some parts of the prison are under construction for wheelchair accessibility, so may not be able to house inmates currently.

“The state is actively engaged everyday in finding new ways to continue going above and beyond the 8th amendment’s requirements and ensure that there’s social distancing to the extent practical and possible in a prison,” Hawkins said.

The lower court’s order, however, would inhibit them from doing that, he said. The order included a long list of requirements for the prison, and though some have since been implemented, the state is fighting others. Those include requirements allowing inmates access to hand sanitizer and cleaning often-used surfaces, like toilet handles and table-tops, every 30 minutes.

Hawkins said the U.S. Centers for Disease Control and Prevention now focuses less on surface spread. As the federal guidelines change, TDCJ needs to be able to adapt quickly without waiting for a permission slip from the court, he said.

“If we were operating under this now obsolete preliminary injunction based on old science and old facts, we would be wasting time and resources that could be more valuably used in protecting offenders in other ways,” he said.

The inmates, and Ellison, however, noted that administrative policy changes don’t always mirror what is happening at the unit — and are sometimes indicative of a lack of change. One of the plaintiffs, an inmate who works as a janitor, said in April that despite policy changes in cleaning, he still had to share gloves with his partner and they never had enough disinfectant to get through a shift.

“It has spread rapidly, the evidence has shown that without the preventative measures, allowing the prison to go forward with their haphazard and often not-following-their-own policies procedures... has not worked,” the inmates’ attorney John Keville said at the hearing.

Aside from questions on whether the prison is abiding by the constitution in its actions, Duncan kept coming back to the state’s argument that the inmates technically should not have sued in federal court because they hadn’t first looked internally for change. Texas argued in filings that the inmates first have to go through the prison’s grievance system before suing in federal court. The system involves a two-step complaint process, with deadlines for administrative responses.

But there are no emergency measures that can speed up deadlines, the inmates’ attorney said Thursday. The inmates, who filed grievances shortly after the lawsuit, argued the first step alone didn’t have a deadline until mid-May, and they couldn’t wait for protection.

Duncan, however, said that the prison responded well before the deadline, countering the argument that the internal process was unavailable for quick relief. The federal litigation had already been underway at the time, putting the prison in the spotlight.

“How can it be a dead end when a prisoner says I need hand sanitizer and within three weeks, the prison says, 'Well, look, we have ample soap,” Duncan said. “The prison is responding to the complaint … He’s not getting the response he wants but that’s not the test.”

The U.S Supreme Court earlier declined to intervene in the lawsuit, but Justice Sonia Sotomayor issued an opinion stating that first following internal grievance procedures are not always required.

“If a plaintiff has established that the prison grievance procedures at issue are utterly incapable of responding to a rapidly spreading pandemic like Covid–19, the procedures may be ‘unavailable’ to meet the plaintiff’s purposes, much in the way they would be if prison officials ignored the grievances entirely,” she wrote.

It’s unclear when the appellate judges will rule on the lawsuit, but the situation — both in how the prisons are reacting to the virus and how it is spreading — is constantly changing. By Wednesday, more than 4,400 inmates and nearly 900 employees had tested positive for the virus throughout the prison system’s more than 100 lockups, according to TDCJ reports. At least 36 inmates and seven employees had died.